November has probably been the busiest month I've had in a long time. It's the time of year for research, essays, more research, long nights, long days, more research, even longer nights... Basically anything except sleep itself. It ended up being a busy month for blogging, too, as after taking about two weeks off, I came back to blogging almost daily! (If only writing papers about uninteresting novels were as easy.) If you're looking for a quick, linked-up guide to what I got up to, you've come to the right place! 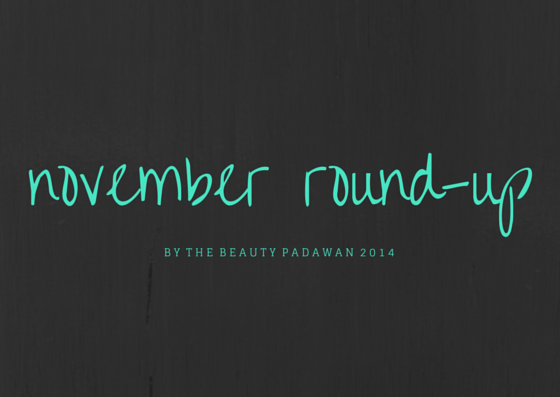 Continuing on with the 12 Day Blogger Challenge, I jumpstarted November with a tutorial-ish on a Glam Evening Look -- using mostly MAC products with colours that are likely dupable from your own collection if you don't have the exact ones. It's a pretty easy look to do, hence the "-ish" on the end of the word tutorial -- you don't need to know anything fancy to be able to pull it off! Then I posted the round-up for October, which is also a quick and handy guide to the month before, though I do say so myself. It was my first-ever round-up, too, which I'd call a pretty cool milestone if it were a milestone at all.

Flash forward two weeks like you pinched the TARDIS and there's another tag post: The 1989 Tag! I hadn't listened to Taylor's album at the time (cue ducking from the hardcore Swifties who've probably just thrown a white horse at me), but that's a situation which has been remedied. My quick opinion of the album? It'll grow on me over time -- I wasn't too enthused by Red when it came out, and now I love it.

I continued on with the 12 Day Blogger Challenge, completely ignoring the fact that I'd broken the rules by not posting for twelve days in a row, with a Day in the Life post! I travelled for two hours to pay some library fines, had a bit of a disaster with a lip product, and enjoyed one of the most delicious milkshakes I've had in the history of my enjoying milkshakes. A day later, I was spilling on the three things I loved enough to make time for in my insanely nutso sabbatical from blogging -- and if you're into music, comedy and murder mysteries, there's a chance you might enjoy them as well!

Then came the piece de resistance: my beauty swap with Danielle from Confessions of a Beauty School Dropout! I got super amazing stuff from her, both makeup and snacks -- and let me tell you, those snacks especially made my incredibly grateful for her friendship. (BUTTERFINGERS ARE MAGNIFICENT.) Seriously, you really should check that out at least.

The last day of the 12 Day Blogger Challenge was to freestyle -- no, not in a pool, but by writing whatever kind of post we liked! I decided to do something a little different, and wrote up a few tips on family history research for those who are interested but not quite sure how to go about it. Am I a genealogy nerd? You betcha.

For those more interested in the spoils of makeup than the spoils of war, I posted my incredibly extravagant haul by Makeup Revolution! If you're a fan of eye shadow, you're in luck -- there is loads of it. I then posted a seriously late review on the Eye of Horus eyeliners -- late because I bought them mid-September and had it written up about a month and a half ago... Yup, Sleeping Beauty could've slept for a hundred years and it mightn't have gone up. But it did go up, and I followed it with a high end haul from Myer a couple of weeks ago -- just a little one this time!

Then came another late review -- this time on a few of the eye shadows from Klara Cosmetics. The colours are incredible and are cheaper than shadows from MAC! (Did I mention that Sparkling Acid Green is a dupe for Urban Decay Dragon?). I wrapped up the month with a review on MAC's Heirloom Mix lipsticks, which are a pretty nice addition to my stash, but, y'know, dupable.

That's it for the November round-up! What did you get up to last month?

Email ThisBlogThis!Share to TwitterShare to FacebookShare to Pinterest
Labels: 12 Day Blogger Challenge, about the blog, beauty, beauty swap, haul, lifestyle, tutorial-ish, You're It!