Selfies. Like them or not, they're officially inescapable. Everyone's doing them, they're a proper word in the dictionary, there's a (pretty great) TV show with the name -- now, there's an eye shadow palette.

When I saw the #Selfie palette on the Makeup Revolution website, I knew that I had to have it. The colours seemed general and neutral, but I didn't care. Why? It has a hashtag in it. I love hashtags. I try to leave them out of blog posts, but for this particular post, I may sneak a few in there. 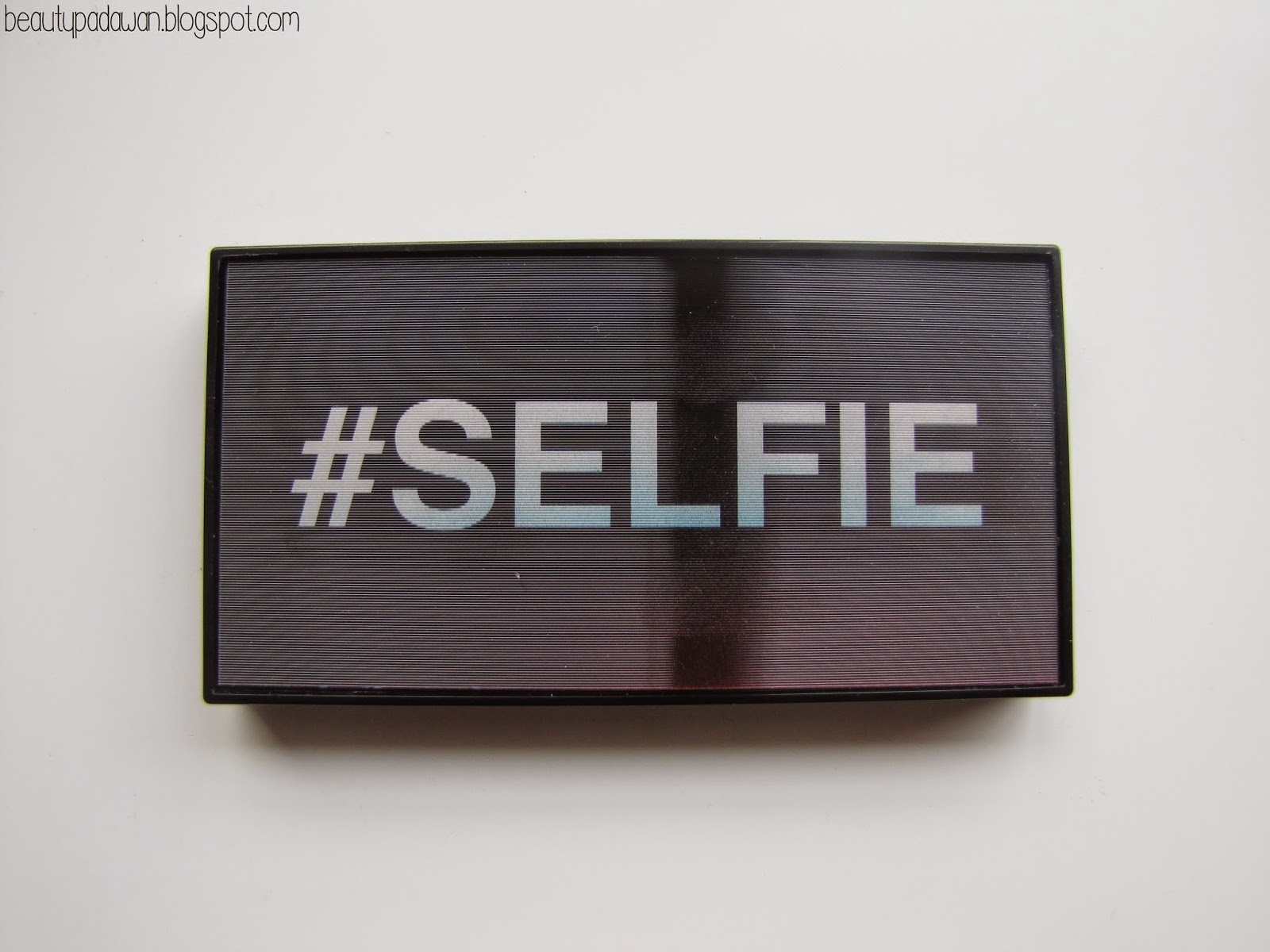 There were two things that made me fall in love with this palette when I opened it up. The first was the vibrancy of the shades inside. I hadn't expected anything special and yet I was met with shimmey goodness! The second: hashtags. Again. Several of the shades have hashtags in their names -- how am I meant to resist that?!

Let's properly start this review before things get #awkward. 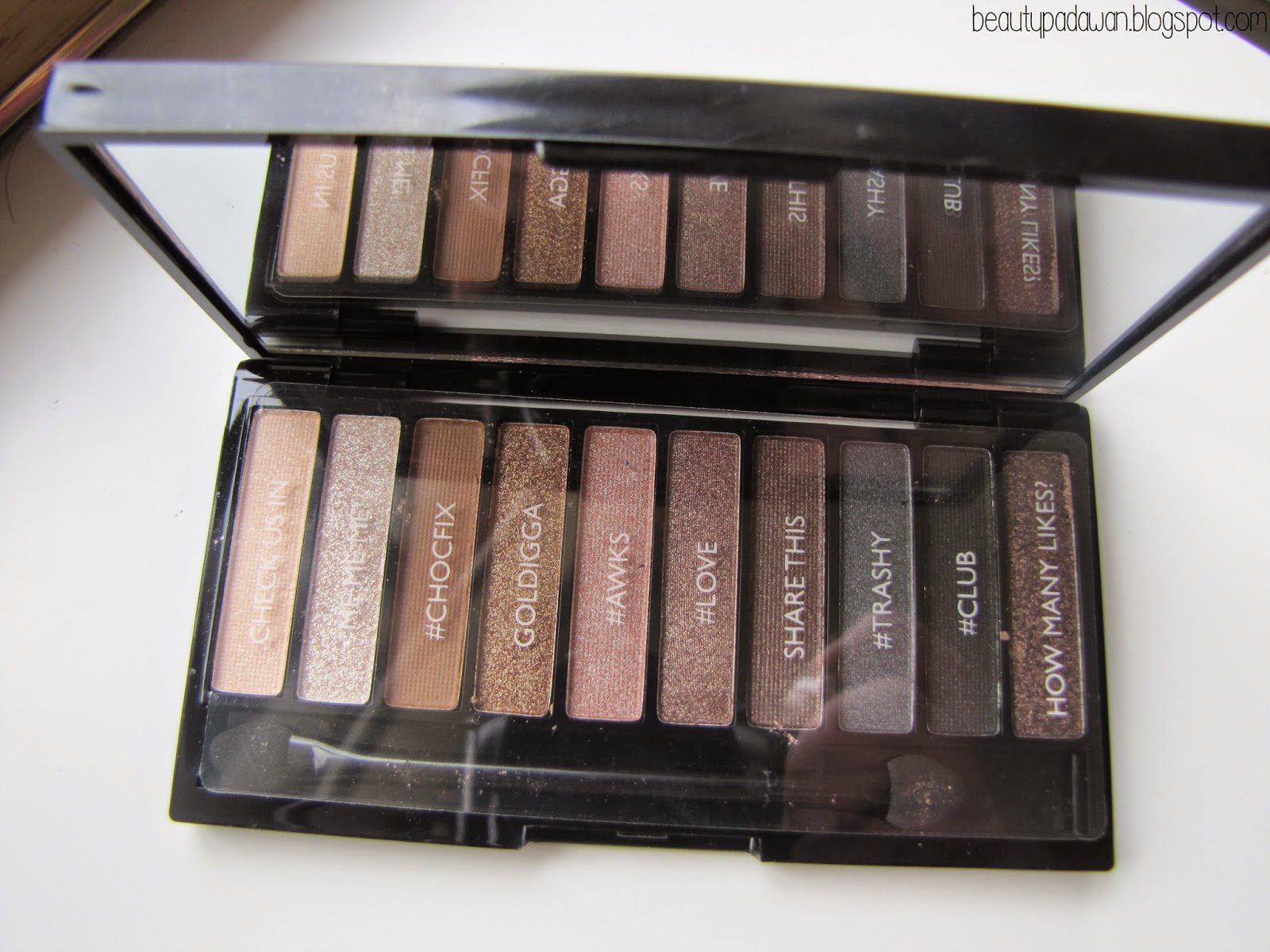 The palette comes in standard cardboard packaging with a window cut out of it so that you could view the top of the palette. There's no plastic in the window like with the I Heart Chocolate palette, it's just plain 'n' empty. The palette comes with a free mini eye primer (#score!), meaning that you can only open the packaging on one end to get the palette out. I found this to be quite difficult, and I ended up destroying part of the flap -- this was disappointing to me, because I keep all of my palettes in their packaging and, as such, I like to keep that packaging in good condition.

The palette itself was also rather difficult to open. Nails alone won't do it, I'm afraid, you'll have to get your fingers under the groove to open the clasp. (#thestruggleisreal) Of course, this does mean that your palette won't open and smash glittery goodness all over your belongings if it gets a bit rough and tumbled, so if that's something that worries you then you might find the aforementioned difficulty a bit of a blessing in disguise. The clasp also at what I frequently think is the "top" side of the palette -- when you open it, "#Selfie" will be facing right way up rather than upside down, so it can be a touch confusing. 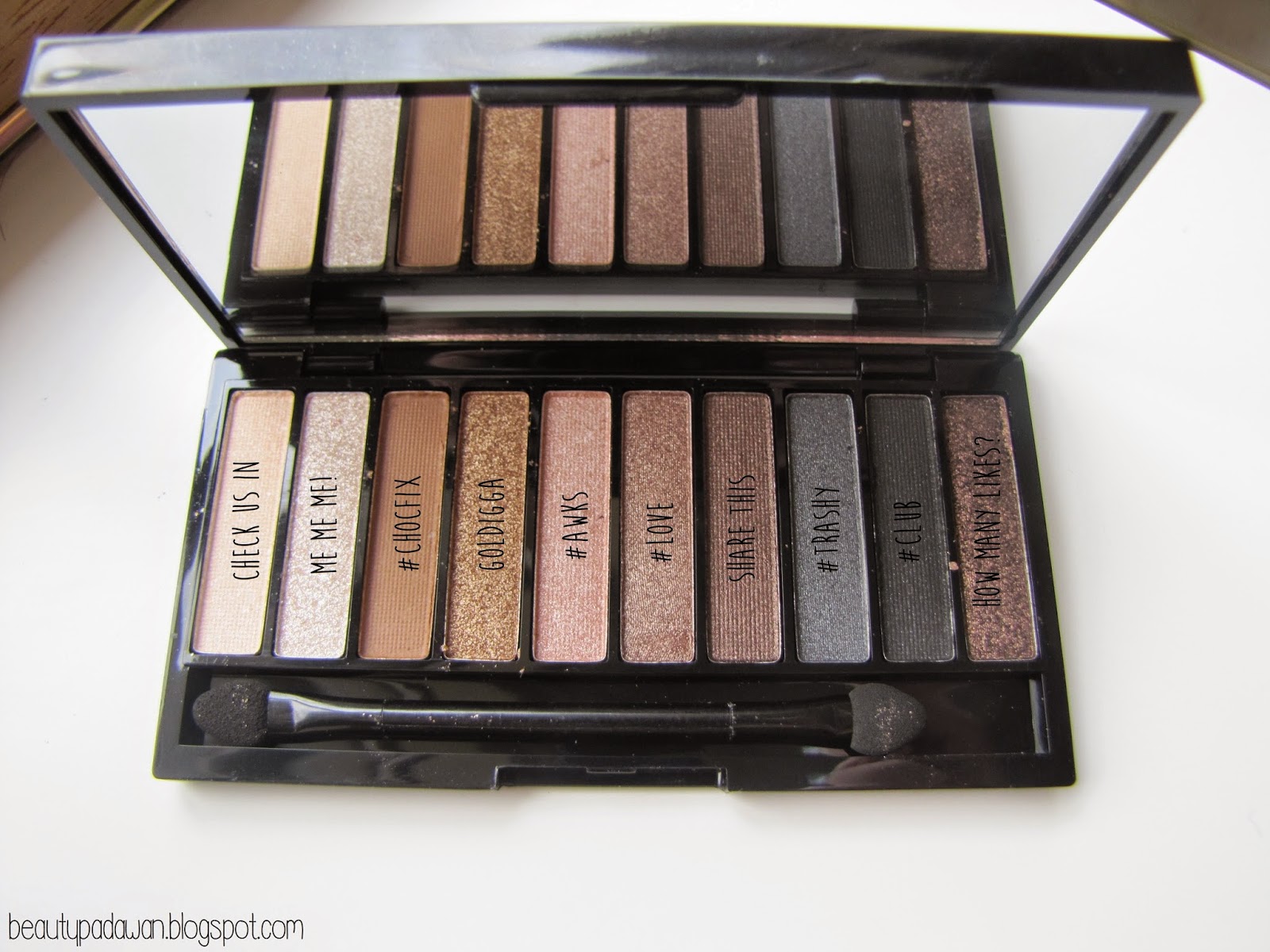 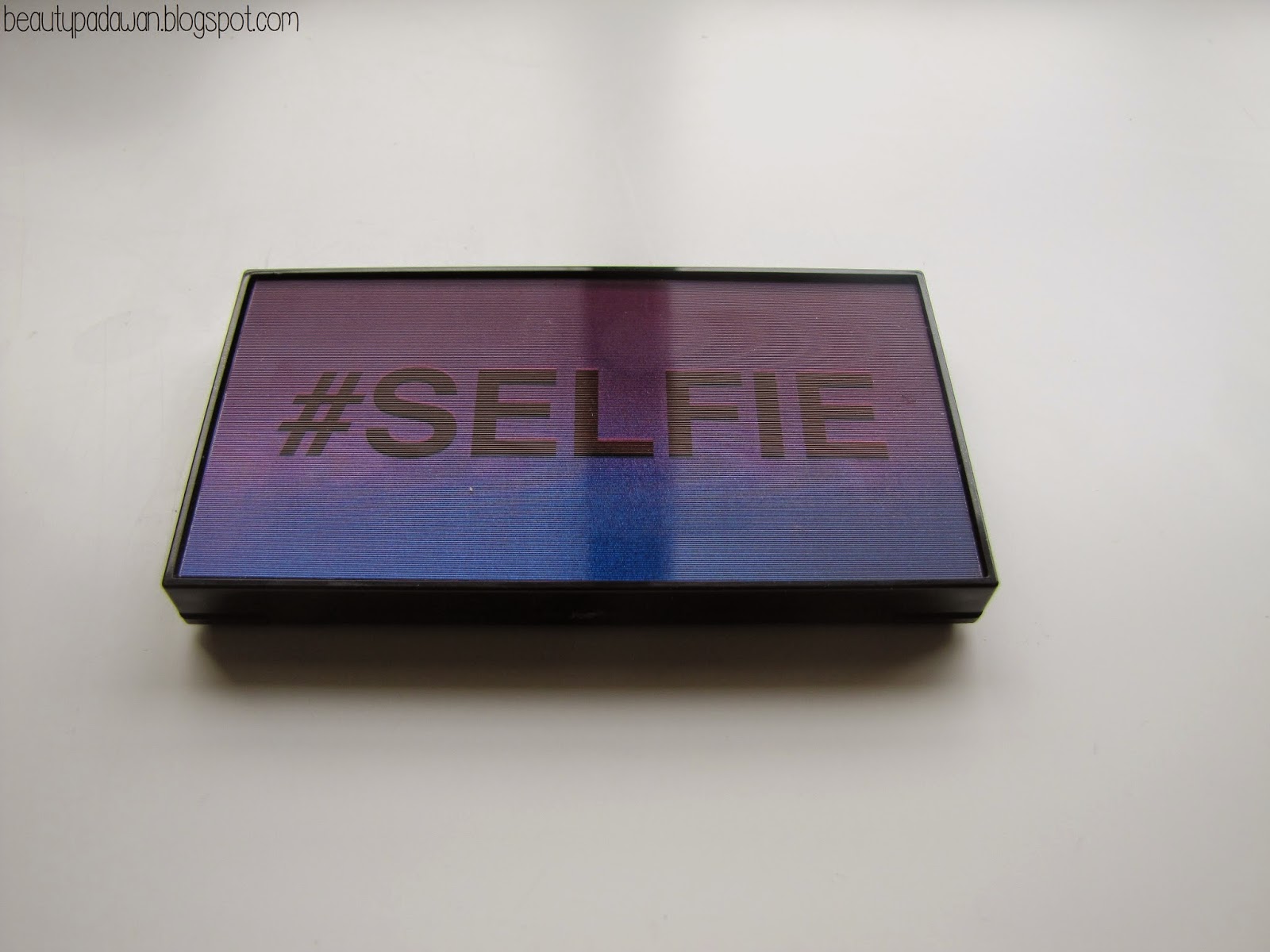 The palette itself is really small -- smaller than my phone, for a start. When you open it up, the mirror stretches to all edges of the lid, so even though it's small, I'm still able to see a lot of my face (something I quite like). It comes with a small dual-ended sponge applicator, something I personally don't care for but something that others might like.

Onto the shades themselves!

Check Us In || This shimmery natural cream is velvety to the touch and builds colour easily. This glamorous highlight shade looks like its colour has been taken from the Pearly Gates themselves, giving the potential to make as big a bang as if you'd checked into the Victoria's Secret Fashion Show.

Me Me Me! || This is glamazon older sister of Check Us In -- this super rich, super velvety silver shimmer definitely has enough attitude to make her own statement, but she's still capable of working brilliantly with this posse of colours to keep all on eyes on your face.

#ChocFix || This soft milk chocolate shade may have a tiny amount of shimmer in the pan, but I'd honestly classify as a matte shade. It's the quiet girl in this sorority of shades, the one who keeps her head down, blends in seamlessly with everyone else and keeps everyone in the constant supply of love and chocolate that they forget they need. She's not a star, but that's her beauty -- she builds colour easily so whether you want to give her moment to shine or blend her with her flashier sisters, you've got a reliable shade to calm down all the glitter.

Goldigga || The bonafide hit of the palette. It's got all the glamour and mystique of Aztec gold, the smoothness of silk and the attitude of the friend who'll do what she likes, consequences be damned. This one demands to be front and centre of attention, no questions asked.

#Awks || The Baby Spice of the palette. It's a cute light rosy pink that can hold her own or support her fellow band member, depending on what you want her for. She and #ChocFix are practically best friends.

#Love || This shade is a kind of shimmery brownish taupe -- or so my eye tells me. It's a neutral colour that makes for a nice everyday or night-time look, but given that I can't quite peg down the colour, I'd call it the enigmatic member of the group. You know who I mean -- that one person you know, but still kinda don't know.

Share This || Ahh, the gossipy friend who has reliable but unknown sources, this shade is reminiscent of delicious molten dark chocolate -- too much and it won't work with me, but just the right amount and it'll do wonders.

#Trashy || This incredibly pigmented dark grey metallic shade is capable of creating the perfect smoky eye. It may be too much for those who aren't fond of super-dark looks -- and indeed it's a little hard for me to imagine a shade like #Trashy getting along with something along the likes of #ChocFix, but then it's sometimes the mutual friends that make the most unlikely pair get together.

#Club || This #totes seemed a little powdery at first, but hand in hand with #Trashy, this can create an amazing smoky-eye that will have heads turning all clubs whether you're morally questionable or not.

How Many Likes? || This swatches very close to Share This, and with names that relate it kinds makes sense. I perceive this shade to be a little darker -- the metallic element seems more pronounced, but that might be because of the base colour itself.

The mini eye primer that came with the palette reminds me of the Maybelline Color Tattoo in "Barely Branded". It's a shimmery nude colour that provides some coverage over the eyelids, but with something of a softer texture than the Color Tattoo. I'm not sure if this is meant to enhance the metallic nature of the palette, but if it was, I'm not 100% sure it worked.

In terms of performances, #Selfie did relatively well. The colours applied beautifully and blended well -- the lighter colours did crease, however, within a few hours. The darker colours, such as #Trashy and #Club, told much the same story, even when I used it on my favourite Benefit Stay Don't Stray primer, but I think they performed slightly worse.

When working with #Trashy and #Club, I had absolutely no problem applying the colours and blending them so that I could get the look I wanted. However, I noticed an hour later that #Trashy had faded considerably -- I applied more and that seemed to do the job, but I was disappointed that I needed to retouch so soon. These colours also creased after three hours, and by the end the seven-hour mark they had faded considerably. They appeared smudged along my lower lashline, but it's entirely possible that that was me unconsciously rubbing my eye, so you never know.

While I was disappointed with the performance of this palette compared to the I Heart Chocolate palette, it's important to keep in mind that my eyelids are oilier than Grease Lightning's engine, so it's not unusual for even high end shadows to crease on me. I had also noticed that my foundation didn't last quite as long on the days I tested the palette, and the Australian weather + oily-prone skin is something I have to keep in mind.

I think, for the price ($9.25 AU), this is a good palette. If you're a lover of matte shades, you won't be too keen on it, and you may encounter problems if you have oily eyelids. If you're someone who doesn't normally need to worry too much about having shadows crease, I think it will perform much better for you than it did for me -- you might find that's worth an extra grade. That's not to say I won't use it -- but I think I'll save it for times when I need to go out for a short period of time.

Let me know what you think of the #Selfie palette, and if it's one you'd purchase for yourself!