Who else feels like 2014 has been Year of the Makeup Revolution? Bloggers were blogging about whatever it was they blogged about, and then KA-BLAM! Makeup Revolution was everywhere! First it was all about the eye shadows, then about the cream blushes -- now I'm seeing a truckload of posts about their lipsticks and liquid blushes flowing through my Bloglovin' feed!

Of course, being slower than a Slowpoke on a lazy afternoon, I've only just gotten my hands on a heap of their eye shadow palettes -- and of course the first one I had to review was the I Heart Chocolate eye shadow palette by I ♡ Makeup, the sister brand to Makeup Revolution. 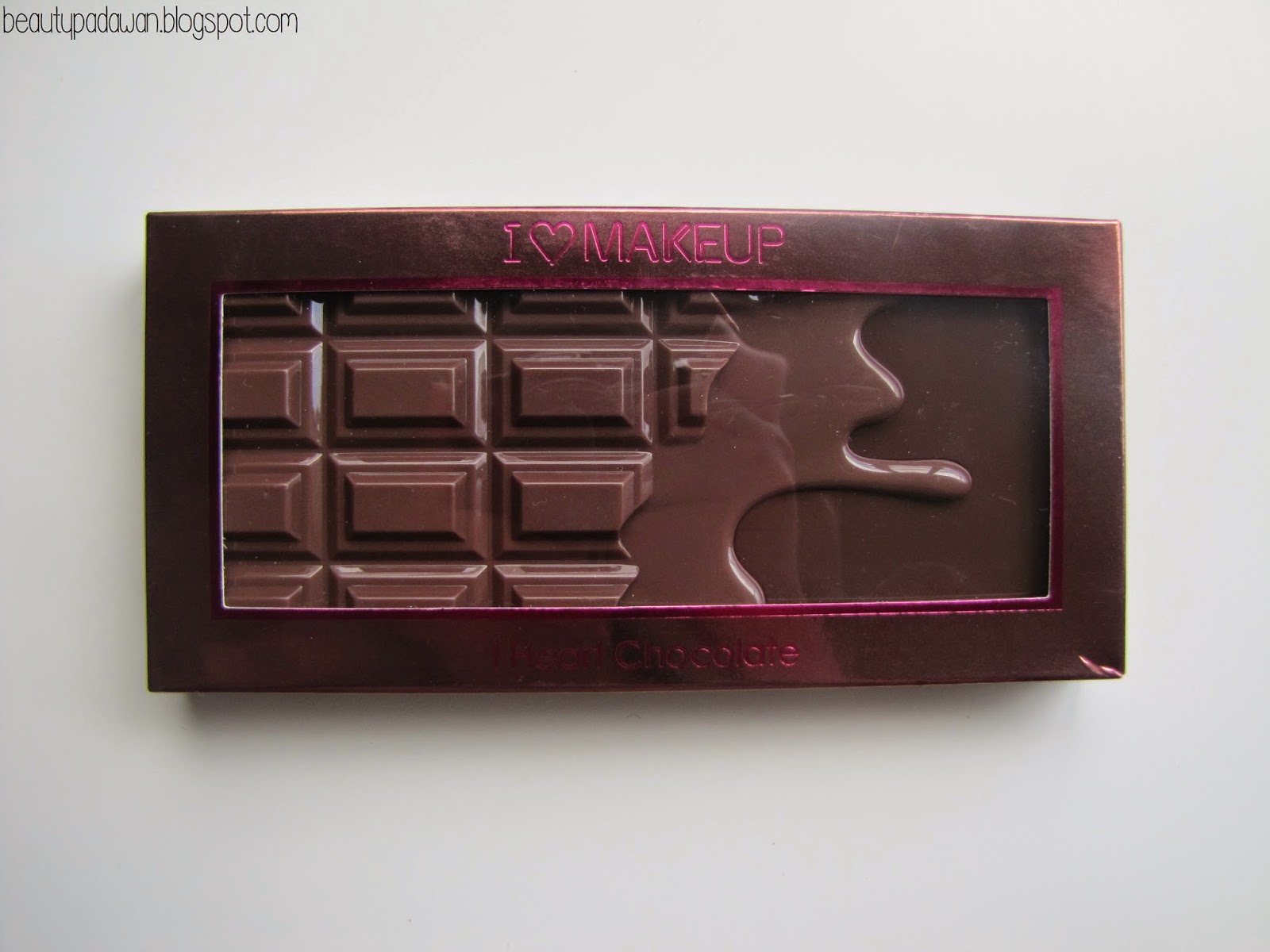 I ♡ Makeup has another chocolate bar palette, called Death By Chocolate, but when shopping for my most gluttonous eye shadow haul yet, I kind of accidentally overlooked it. (Oopsy!) I can't count how many times I was confused by whether the palette was called I Heart or Death By until I realised there were two! Oh, the curses of being a Padawan! 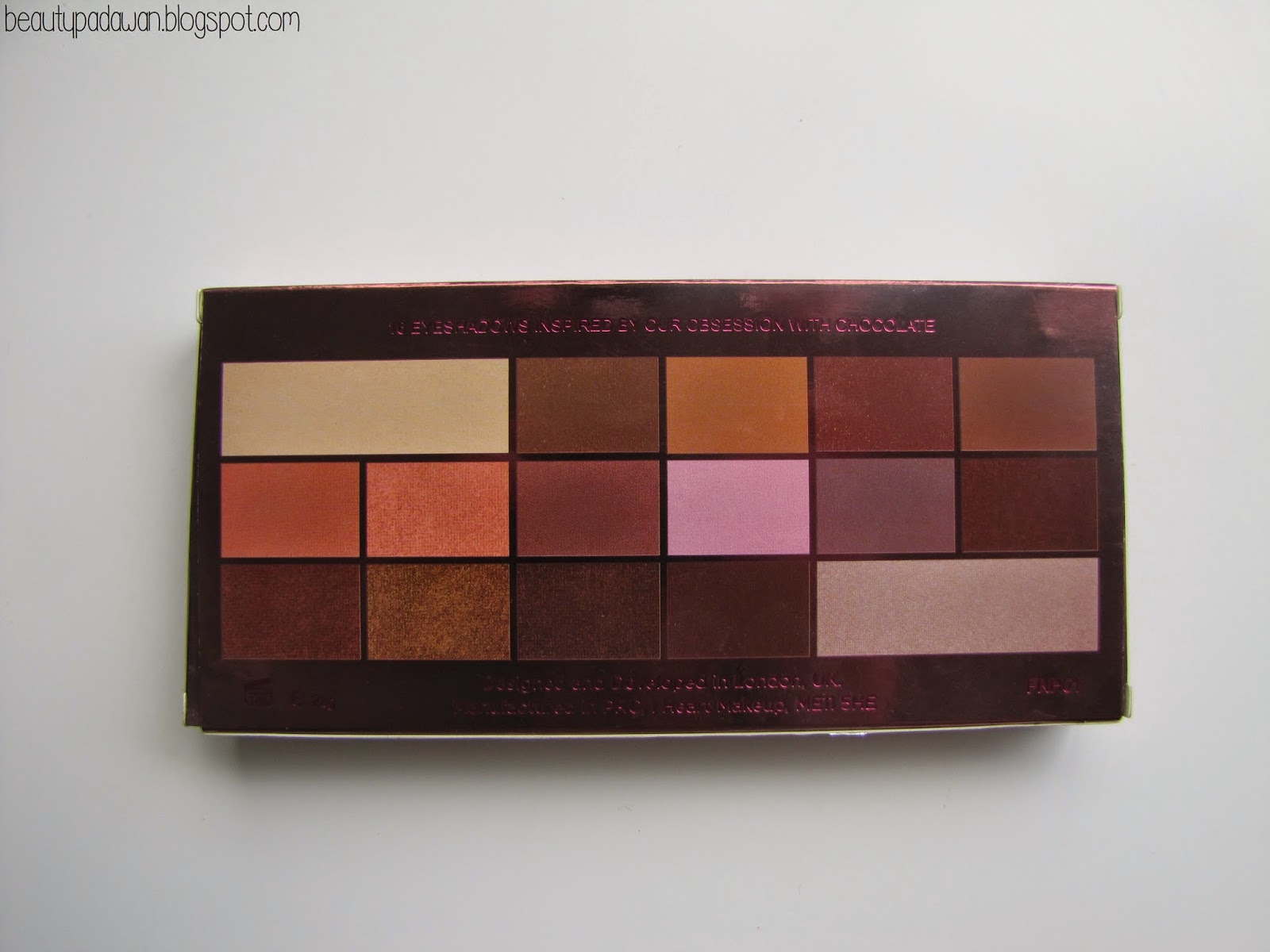 The packaging is made from shiny brown cardboard with a clear plastic window to see the melty-looking goodness inside. Flip the packet over, and you've got a colour indication of the shades you're going to find inside. If that doesn't remind you of the Too Faced Chocolate Bar palette, please take another look -- or double check to make sure you didn't accidentally pick up Death By Chocolate! 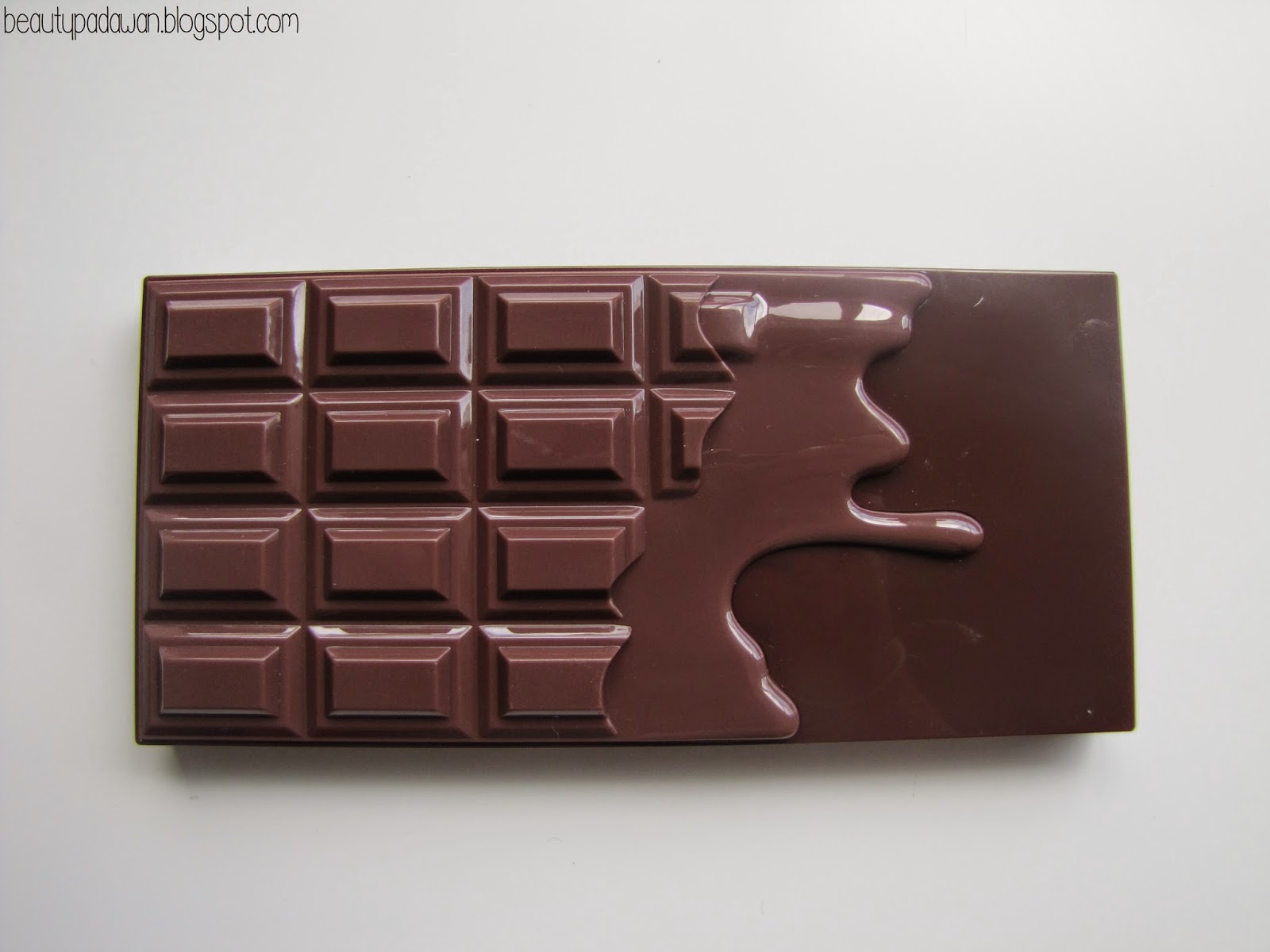 The palette itself... It really does look like a dream. It starts off like your regular chocolate bar but transforms into melty goodness moving along a flat platform. If looking at this palette doesn't make you want chocolate right away... It really should.

Opening up the palette, there's a great big mirror that makes applying straight from the pan really easy to do. I like to see my whole face when putting on makeup, so I can seriously appreciate a mirror this size. There's a dual-ended foam applicator that I won't personally have much use for, but I think you might be able to fit one of your own brushes in there within reason. 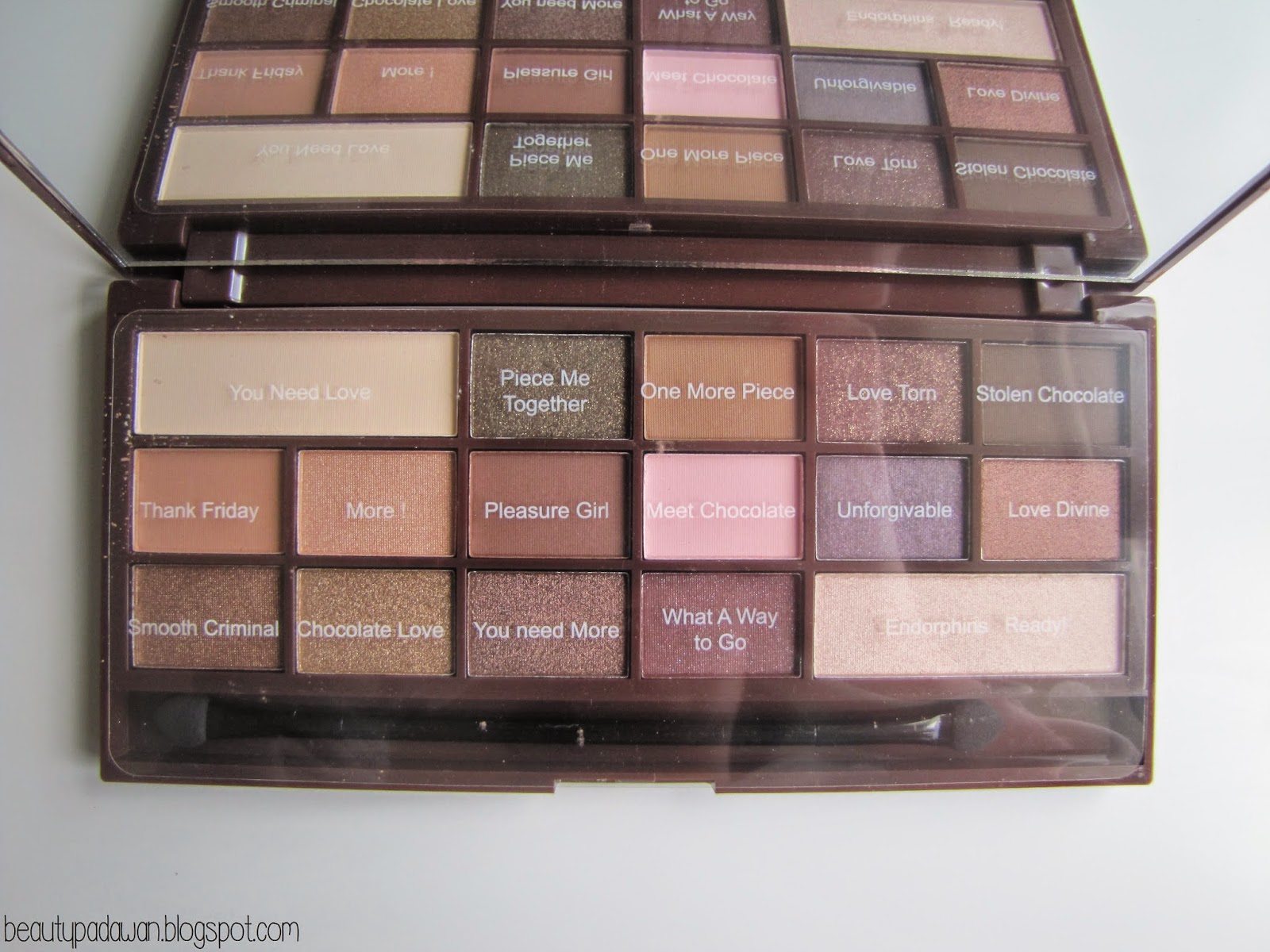 One of the few downsides for me is that the shades of the eye shadows are printed on a plastic slip instead of on the palette case itself -- this seems to be the standard "thing" for most palettes that I've come across so far, but I prefer not having to worry about losing a sheet of plastic. Let's face it: sometimes the names are half the fun of eye shadow!

One of the most important questions: does it smell like chocolate? Nope, it certainly does not -- but then it doesn't claim to. It has a slightly nutty scent, and it's not too bad. 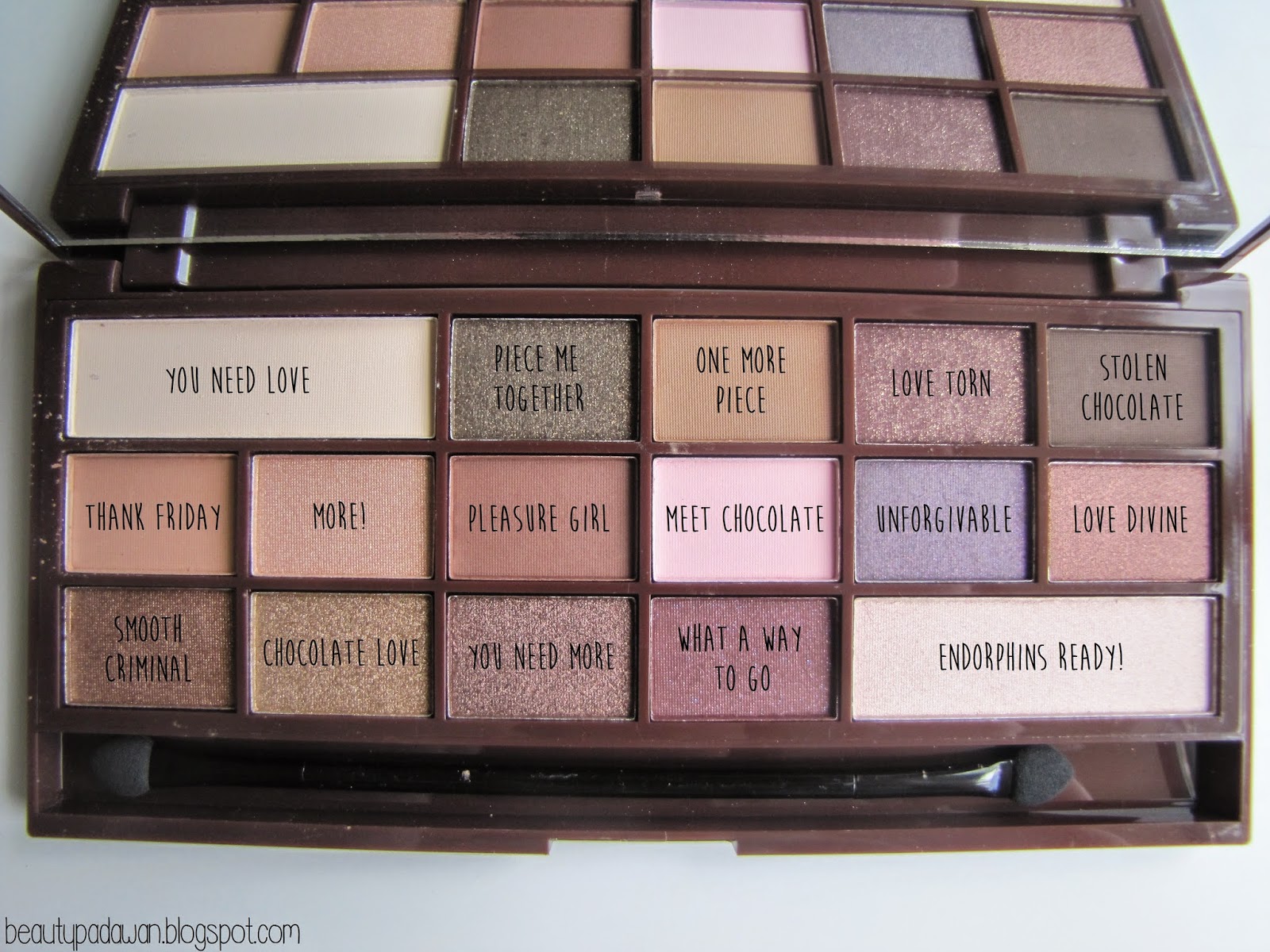 Looking at the pan, the photos I took really doesn't do it justice. The colours look amazing in-pan and they also swatch up pretty sweet! (No more puns, I promise. Ever.) 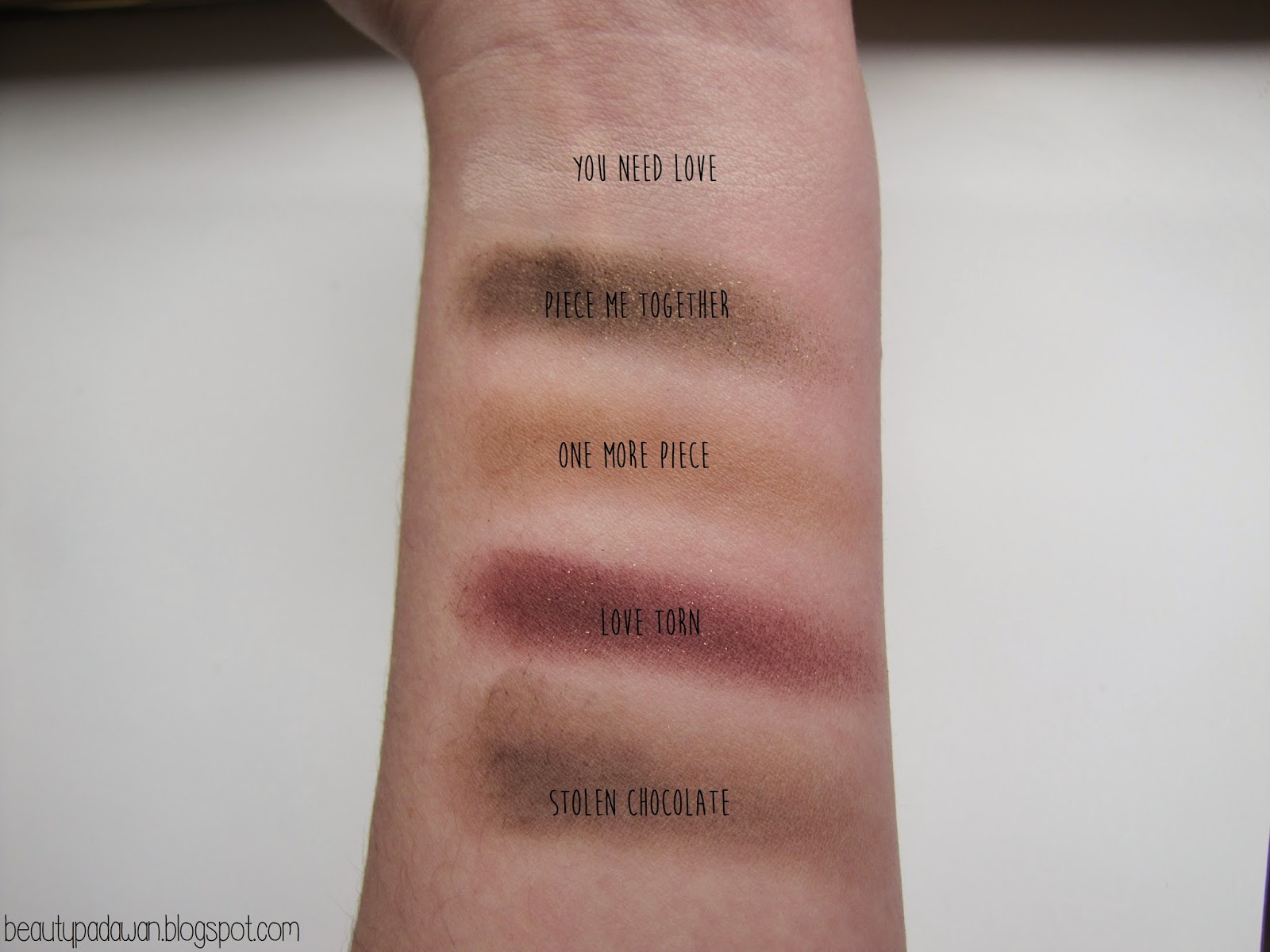 You Need Love || This is a soft matte cream white that feels silky to touch. It doesn't show up too much on my skin, but that's not to say it's chalky. It works well as a natural highlighter without looking too white.

Piece Me Together || This is a dirty brownish-gold with gold shimmer. It swatches well, and while I would say the texture is largely velvety, I feel like I can feel a little grittiness because of the glitter -- but it's not unpleasant. I've worn this colour in my crease several times and to my amazement, it didn't crease!

One More Piece || This is a soft matte camel brown that is also silky to touch. It swatches a little sheer and powdery, but it does build up colour really well.

Love Torn || One of the most exciting colours for me! This is a dark reddish-brown with purple undertones -- maroon, in short -- with gold shimmer. There's less of it than in Piece Me Together, but it's evenly dispersed so who could complain? The texture of this is also the same.

Stolen Chocolate || This was a bit of a disappointing shade for me. It's sheer and powdery, and it doesn't really feel particularly silky. It does build up well, which is the saving grace, but it's a shame that it wasn't more pigmented. 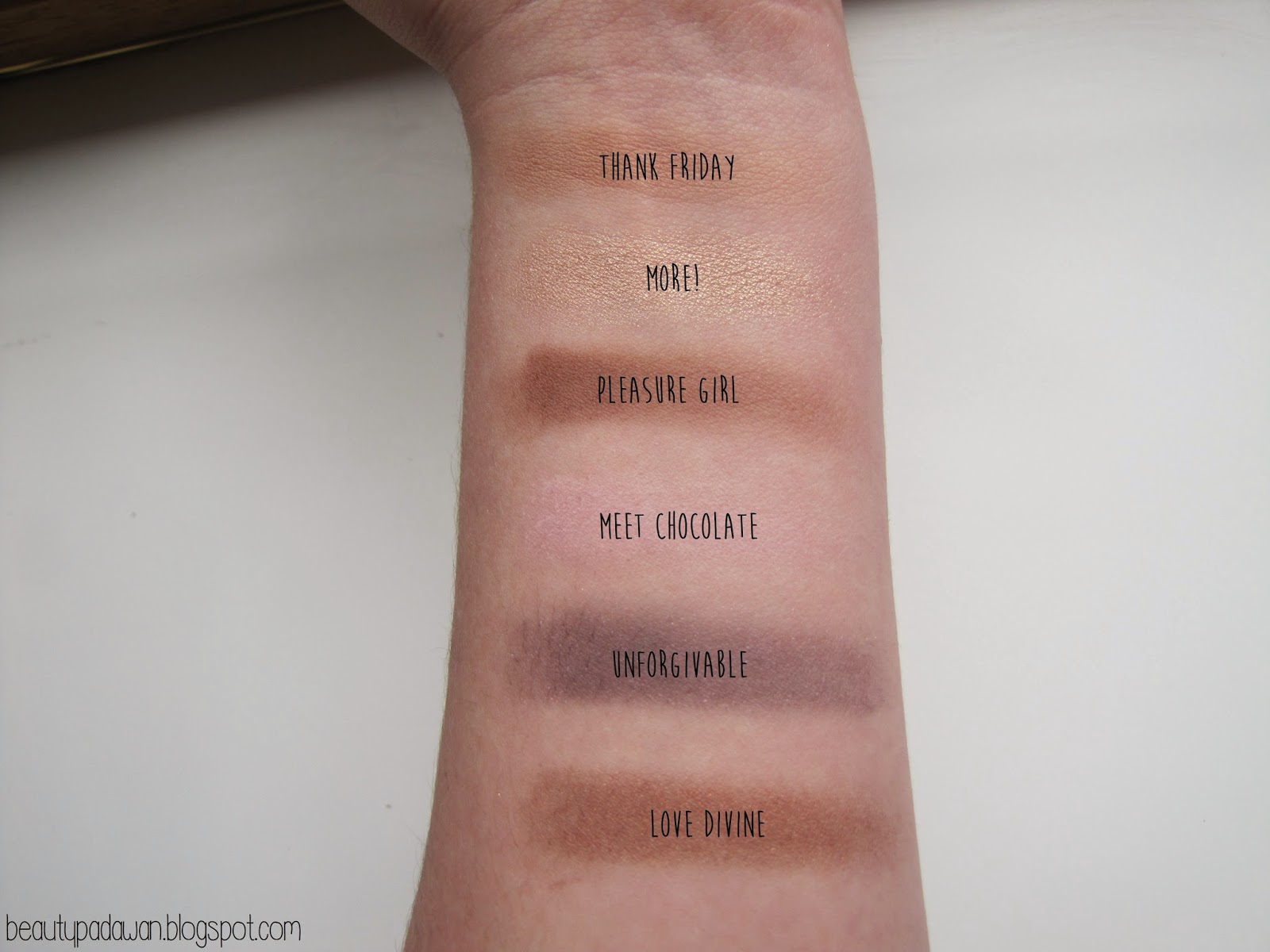 Thank Friday || This is a matte light brown with orange undertones. This is also a little sheer but it is silky to the touch and it builds reasonably well.

More! || This is a really interesting colour -- I thought that it was surprisingly sheer for a metallic shade when I originally swatched it. I quickly realised that it's not sheer at all, but rather it blends in well with my skin tone. It's a natural kind of peach-toned shade -- think the Maybelline Color Tattoo in Barely Branded, but in a powder shadow form. It's actually a really delightful shade to use!

Pleasure Girl || This is a light to medium matte brown. Like most of the other matte shades, this was silky to touch and sheer to start -- but it builds really, really well.

Meet Chocolate || I'm not sure why this shade is called Meet Chocolate when this cool-toned matte pink is the same colour as strawberry Nesquick. I honestly thought that perhaps there had been some kind of mistake with the plastic slip, as Pleasure Girl could easily be the name for a pink shade. The shade seems to swatch sheer at first, and it is a little powdery, but it packs on colour brilliantly -- quite frankly, I love it.

Unforgivable || Compared to the many other many metallic shades that I've swatched, this was relatively disappointing. It didn't seem quite as richly pigmented, even though to touch the formula seemed mostly there. That being said, it blended really well with the other colours without disappearing. Unforgivable is a dark-toned aubergine colour with pink micro-glitter (I think) in it.

Love Divine || This is a golden bronze version of More!. It's beautifully pigmented and it makes for a really nice glamorous evening look. 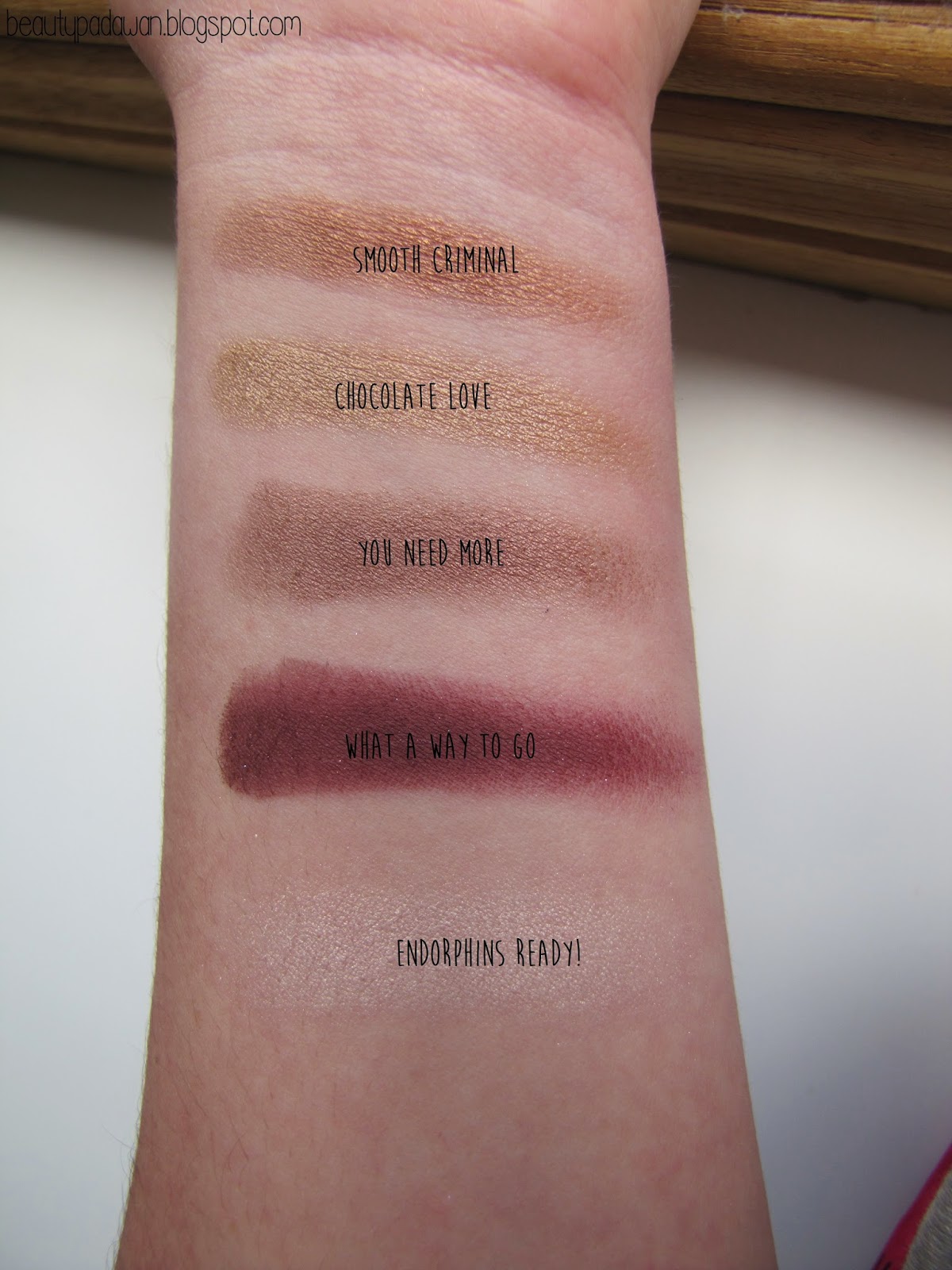 Smooth Criminal || This is a metallic golden bronze -- think along the lines of the shimmery golden bronze tan that hardcore tan fans use. Its texture is slightly unusual, in that it's almost silky but not quite. It looks absolutely beautiful, however, and it's a favourite shade of mine.

Chocolate Love || This shimmery metallic beauty is gold. More than that, I feel like it's something of a true gold, kind of like gold body paint. It starts off slightly sheer but it packs on to full intensity in no time at all.

You Need More || This shade can be summed up in one word: magnificent. It's velvety and creamy and it makes my heart sing to swatch it. It reminds me of a metallic molten chocolate, although I honestly couldn't tell you why.

What A Way To Go || This shade is a deep maroon colour, and it looks almost matte, except it has the faintest trace of micro-dimensional glitter -- less than what it seems in the pan. It's crazy pigmented, but feels just a touch gritty. Even so, it's one of the highlights of the palette.

Endorphins Ready! || This metallic pearly white shade make for the perfect glamorous highlight for the browbone and inner corner. I actually think that this would make an excellent highlighter for the cheek bone as well, and I may actually use it as such in the future.

Overall, any negatives I have to say about this positive are vastly outshined by all the positives. As far as wear time goes, I've worn them all day and they've lasted even when the weather has been hot and humid. (You can check out a look I did using a few of the shades here.) The metallics are magnificent, the shimmers are superb, and you can even make the most of the mattes. While some of the shades can be on the powdery side, there wasn't any fall-out -- and wouldn't fall-out be infinitely worse?

In terms of value, you definitely can't go wrong; at $14.82 AUD, it's suitable for any budget, whether you're buying it as a present for a friend or a treat for yourself -- even when you take shipping into consideration!

The I Heart Chocolate palette by I ♡ Makeup is, in my most humble of Padawan opinions, a great palette to own. I seem to be able to find an upside in just about every negative, and I don't know that that's happened to me before! If you already have the Chocolate Bar palette, you might find that you can give it a miss -- however, I will be writing a comparative post in the future, so keep an eye out for it!

Would you buy the I Heart Chocolate palette?