Remember how last week I made the suggestion that risotto perhaps wasn't the thing to cook if you were running short on time? As it turns out, cottage pie definitely isn't either. Although I might make it again in the future, it probably won't be for a long time -- it took me nearly four hours to do! Granted, this lengthy extension in time was almost entirely my fault: I was the idiot who forgot to take the meat out last night!

The great thing about this recipe is that, like the last couple that I've done, it uses ingredients that you'll probably already have -- the only thing you may need to pick up is the red wine. Despite including some not-favourites of mine (onion, celery, tomatoes -- I'm looking at you), this week I more-or-less followed the recipe perfectly. I did make one or two alterations based on personal preference, but I don't think they would have otherwise impacted the flavour of the pie. 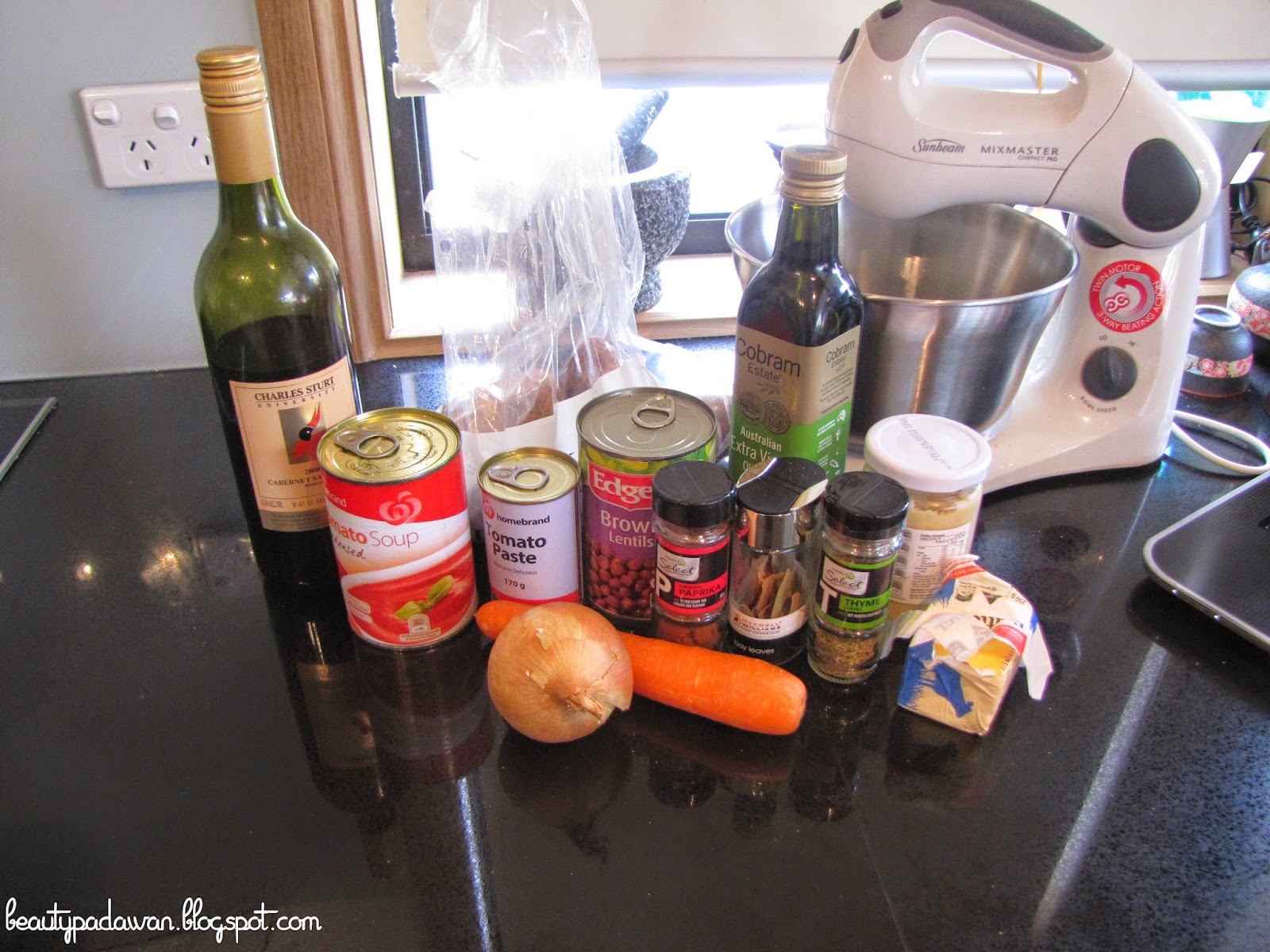 Here are some of the ingredients you'll need. If you look at the actual ingredient list, you'll see that a couple items aren't included: the meats, the chicken stock and the milk. There's no real reason for this except that I forgot about them! Another good thing about this recipe is that﻿ you'll use most of these ingredients at the one time, so you don't need to worry too much about method.


Frying chorizo is one of the easiest bits, but you want to make sure that you do it well. I took this photo early on, so it had only just begun to sizzle, but you basically want to cook the chorizo until it has sort of concaved on one side﻿. The meat may crisp up a bit, but it shouldn't burn.
In case you're interested, I'm cooking this in my electric frypan (or, technically, wok). It is the Breville Avance Gourmet Wok, which I think may have been re-branded as the Hot Wok - 6 Litre Family Size. I was chatting to my good friend Danielle (the one, of course, from the amazing Confessions of a Beauty School Dropout) about it the other day and, honestly, I cannot recommend it enough -- it is my favourite cooking appliance to use! If something calls for a frypan, I tend to reach for this instead, as I've got this amazing ability to burn absolutely anything with ease. The non-stick is still perfect after years of use, and I've never had to soak it or scrub it. Being electric, it plugs straight into the wall socket, so I also don't need to worry about immediately cleaning any spills I make on the stovetop. It is simply amazing!


This is what mess me up the most: cooking the meat. This wasn't because of any culinary techniques, it wasn't to do with the meat itself -- it was because I was an idiot and forgot to take the meat out of the freezer until about 1pm. You can still cook with the meat if it's frozen, it just takes much, much longer -- and you often have to cook with one gigantic lump, as seen above. In my case, I had to work with two. 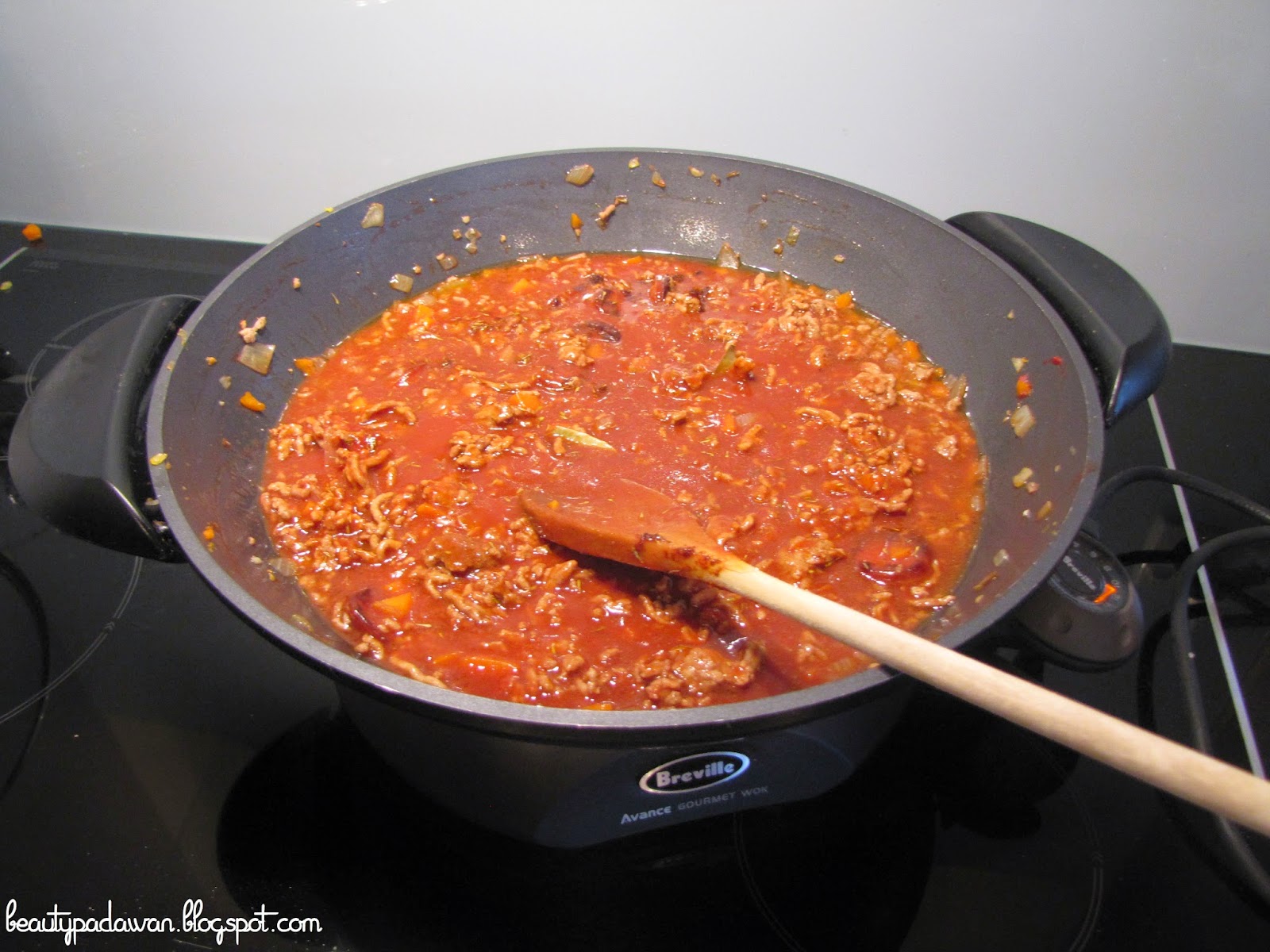 Once you chuck everything into the frypan, you let it simmer for an hour! The thing about this electric frypan is that doesn't keep food at a constant simmer, but rather, it reaches the desired temperature and switches off. This isn't a mechanical fault -- it keeps your food hot and switches back on to reheat once it's sensed the heat drop below what you want it be. I found that the saucey mix still reduced, but because it doesn't simmer (or I haven't figured out how to make it simmer), it is possible that it needed a little longer.


What do you get when you boil some potatoes, mush it all up, plop it on top and stick it in the oven? A delicious cottage pie! I find that, if you make the mashed potato with real potatoes, it's best to use an appliance to get out all the lumps. I used the Kenwood Triblade Hand Blender HB724, using the mashing/pureeing attachment. It just makes everything much, much quicker than using one of those old school hand mashers, and you can get the delicious smooth consistency of instant mash!

Even though it ended up taking all afternoon to make, I was very pleased with the end result. It was tasty, flavoursome and the mashed potato cut through some of the richness. The consistency, while not soupy per se, did not hold on its own -- you definitely need to eat this in a bowl! -- but, as this was my first attempt, I figured that I'd be pretty pleased with a pie that had a filling of that consistency.

This recipe came from the same magazine that I've worked from over the last few weeks, but unfortunately it's disappeared in the disaster zone I call my bedroom, so I went online to get it. If you can't be bothered checking out an external website, I've included it below. Here are a few things to consider when making it:

And there you have it -- a recipe for a very delicious cottage pie. Although it takes awhile, you can actually make it ahead of time and freeze it!

Have you made cottage pie before? Do you have any recipes I should try out? Let me know!