I feel a little weird calling this post a FOTD -- I quite obviously used tutorials for the makeup, they weren't looks I came up with on my own. However, I didn't own anything used in either tutorial and it was just so much fun to get back into all the stuff that I have and try to work out what to use that I thought, "Well, maybe it counts!"

If the title of this post wasn't already a giveaway, last night my best friend and I went to John Mayer's concert! I was able to get good seats on the upper stands, but it was only a couple of days before that we started to put outfits together and think about makeup.

Amy told me that she was going to wear a floral jacket over a black top and pants, so I thought that a green eye look might go nicely. I'm not going to lie, unfortunately I didn't come up with this idea off the bat -- I was scrolling through a few beauty blogs, hoping that something would jump out. As it happened, one did and it's the Emerald Decadence step-by-step tutorial by Dulce Candy. I liked this because although there's no video, she has a picture to go with each step, so I can get an idea as to what I'm supposed to be doing.

Originally, Amy wanted to try it out herself, but I think she has less experience with glamorous eye makeup than I do, and she quickly let me take over. Amy's eye shape is different to the pictures and it was my first time applying makeup on another person, so it didn't turn out exactly the same but I still think it looked pretty good. 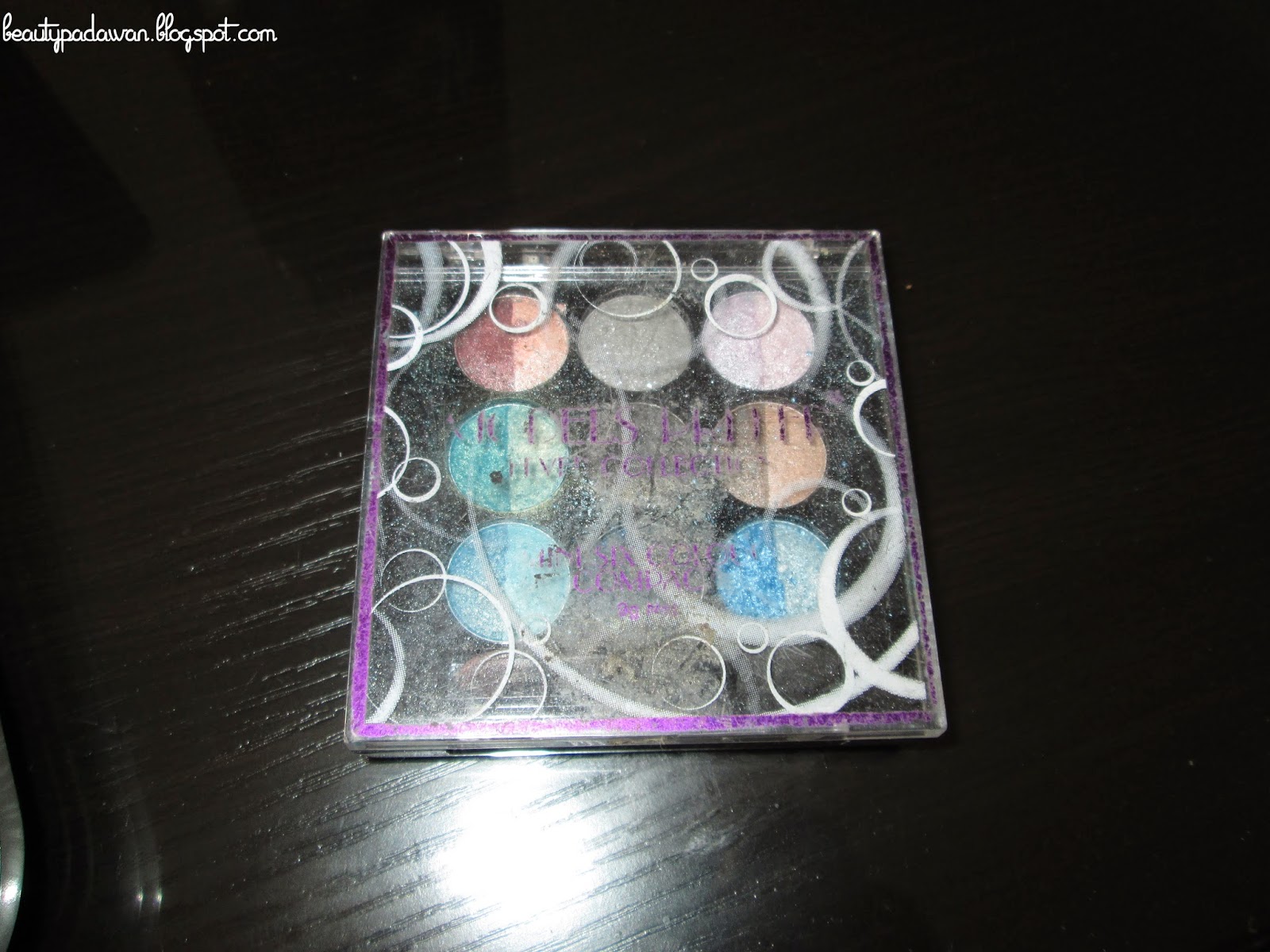 The palette I used is a super ancient one that I've had since the dawn of time -- the lettering on the top has worn off almost completely but I'm 98% sure that it's supposed to be a "Fever Collection" by Models Prefer. Unfortunately, this is so old that I can't seem to find any trace of it at all on the Internet. I used three of the colours I used were a kind of aquamarine green, a slate grey and a black. All of the colours in the palette are shimmery and (I think) quite pigmented. However, they crumble easily and cause a lot of fallout -- I think that this is likely because it's so old. I also used the Maybelline Eye Studio Hyper Diamonds eye shadow palette in "Charcoal Diamonds" (but I forgot to take a picture of it!).

First, I took the green colour and put it all over the lid with a flat brush, and made sure that the colour really showed. Very gently, I swiped what was left on the brush along Amy's lower lashline, hoping that it would help the kind of smokey look on Dulce Candy. I'm not sure that I got it to work, but it didn't look clownish, so that was a plus. Then I took the slate grey and the lightest grey from the Maybelline palette and blended it on the outer v and into her crease. I really tried to blend this in nicely, and sometimes I took my contour brush and put a little bit more into the outer edge of the crease to define it a little bit more. (Hopefully it worked!)

Then I took the black middle colour from the Models Prefer palette and put it into Amy's outer v with the same contour brush, then blended it into the grey. I was very light-handed, as I didn't want to put too much of the black on at once -- nope, I built it up to a depth (if that's the right word) that I liked! Then I took the white shade from the Maybelline palette and put it into her inner corners and along her brow bone.

Next, I lined Amy's upper lashline with her Rimmel Scandaleyes Thick & Thin Eyeliner, and then got her to line her waterlines with her Rimmel Scandaleyes Shadow Stick in "Blackmail". We were going to use her Scandaleyes Rockin' Curves Mascara but Amy's not a huge fan of it, and after looking at the brush for that thing, I can understand why. I think it's ridiculously big and not at all helpful to Padawans, so we went with the CoverGirl LashBlast Volume Blasting Mascara.

I think that my favourite part was convincing Amy to put on false lashes! She was understandably apprehensive about wearing them, but I convinced her to give them a go, so I got her the Eylure Pre-Glued Lashes in "117". I think that they're slightly denser than natural-looking lashes, but not too over the top. With that done, I cleaned up the excess fallout with a makeup wipe, Amy applied her foundation and blush, and... voila! 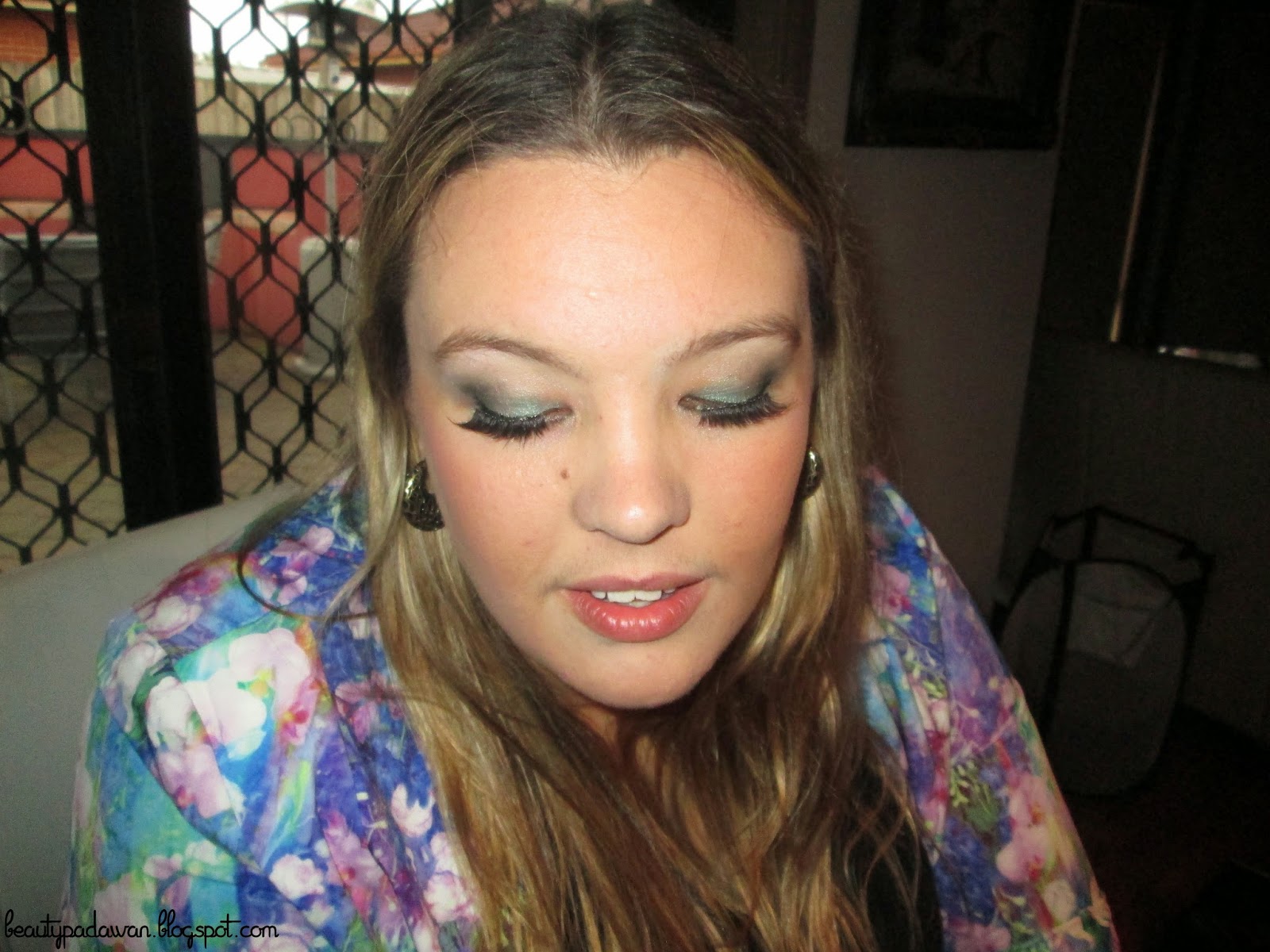 I don't think that Danielle had it specifically in mind when I asked her for suggestions, but her Taylor Swift's Grammy's Look was what I went with! Even though I looked at other tutorials for potential, this was the first one I saw and I kept coming back to it, so in the end I decided that it was obviously "the one"! Interestingly, although Danielle uses all drugstore products, I don't have any of what she used, so once again I had to play around with other bits and pieces.
For this, I used the blue colour (circled with green) in the above-mentioned Models Prefer palette, as well as an old Elizabeth Arden mini palette. I'm not sure how old this is either, but none of the shades are listed on the Elizabeth Arden website.

I first packed "Sugar Cube" all over my lids with a flat shader brush, then went over it with "Sterling", sometimes mixing in a little more of "Sugar Cube" to give it a little bit more light. With my blending brush, I blended in "Graphite" on my outer corner and along my crease. When I was happy with how it looked and how defined the edge was, I took my contour brush and very, very lightly put some of "Black Tie" into the crease. Danielle had advised against using a lot of black, so I wanted to keep my look as silvery as I could. After that, I blended "Graphite" into it, then patted "Sugar Cube" into my inner corner and along my brow bone.

Then came the exciting part -- the coloured liner! I bought an eyeliner brush a few weeks ago and realised that I didn't really have much use for it (I have a post in the works relating to that brush), so I was thrilled to find that it was perfect for what I needed. I thought that the blue in the Models Prefer eye shadow palette (circled in green in the earlier picture) was the closest to what Danielle used, so I decided to use that for my winged liner. I found that I needed to be very careful, because the shadow broke into chunks very easily (does that even make sense?) and I didn't want to get shadow all over the wrong part of the brush. I did a thin blue wing, used my CoverGirl mascara, then applied Napoleon Perdis Eyelashes in "Petunia". It looks like you can't get them anymore, but I would say that they perhaps have the thickness of "Poinsettia" and the straight edging of "Gardenia".

As far as the face goes, I used the Napoleon Perdis Auto Pilot Pre-Foundation Skin Primer, then applied Benefit's Hello Flawless Oxygen WOW Foundation in "Champagne". I gave it a little time to set -- something I've been doing to try and see if it helps it last longer! -- concealed my numerous face demons with Benefit's Conceal Palette, then used my delightfully fluffy fluffy brush (saying that out loud sounds fine, but when you write it...) to set it with Stila's Illuminating Powder Foundation in "30 Watt". I had a little bit of experimentation with bronzer and the Hourglass Ambient Lighting Blush in "Radiant Magenta" -- and then I was done!

Amy happens to be particularly handy when it comes to hair, so she curled ours with her gigantic and scary curling thing. I did have a go at it myself, but I only managed to successfully generate a curl that looked more like an octopus tentacle. 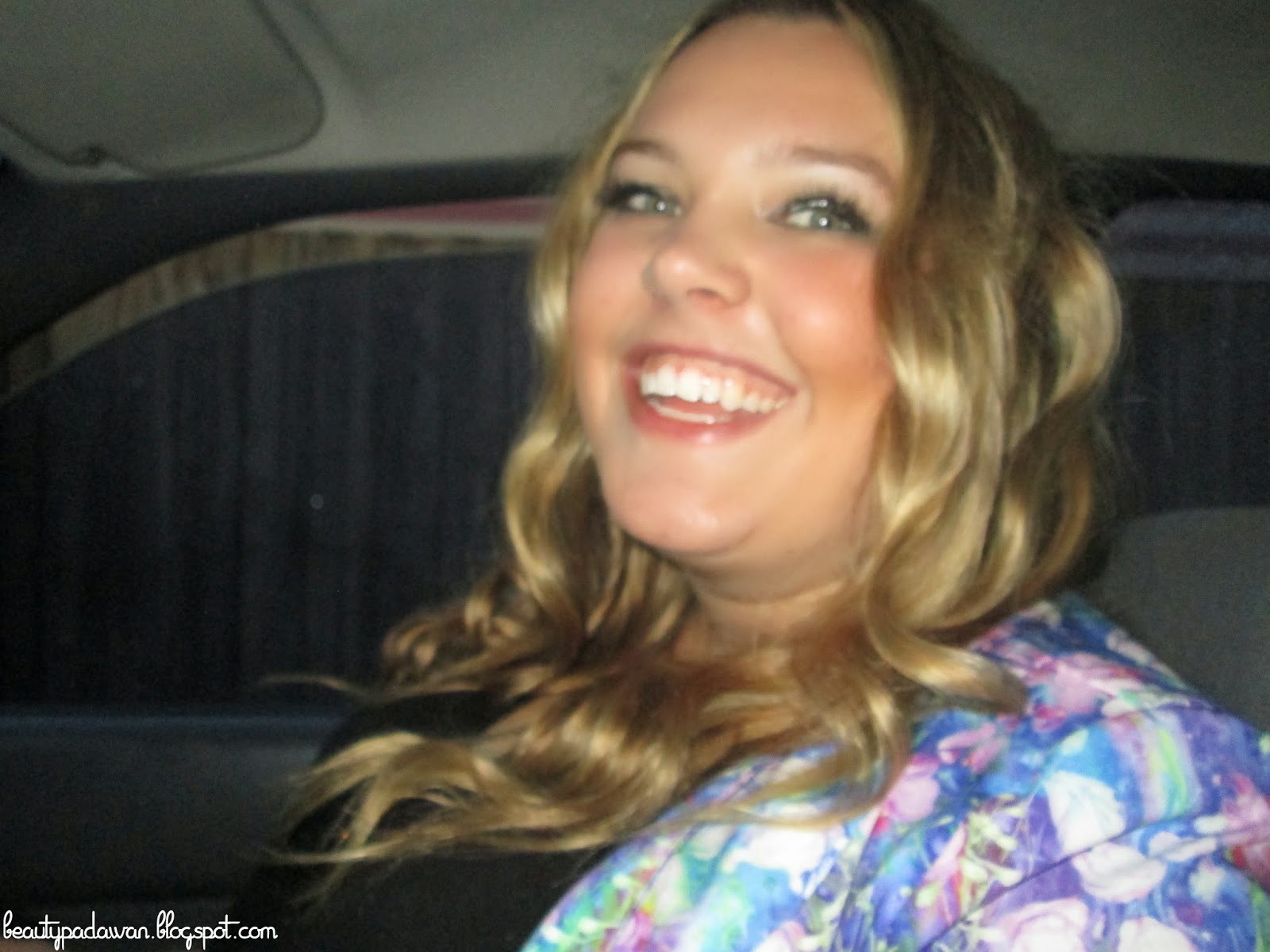 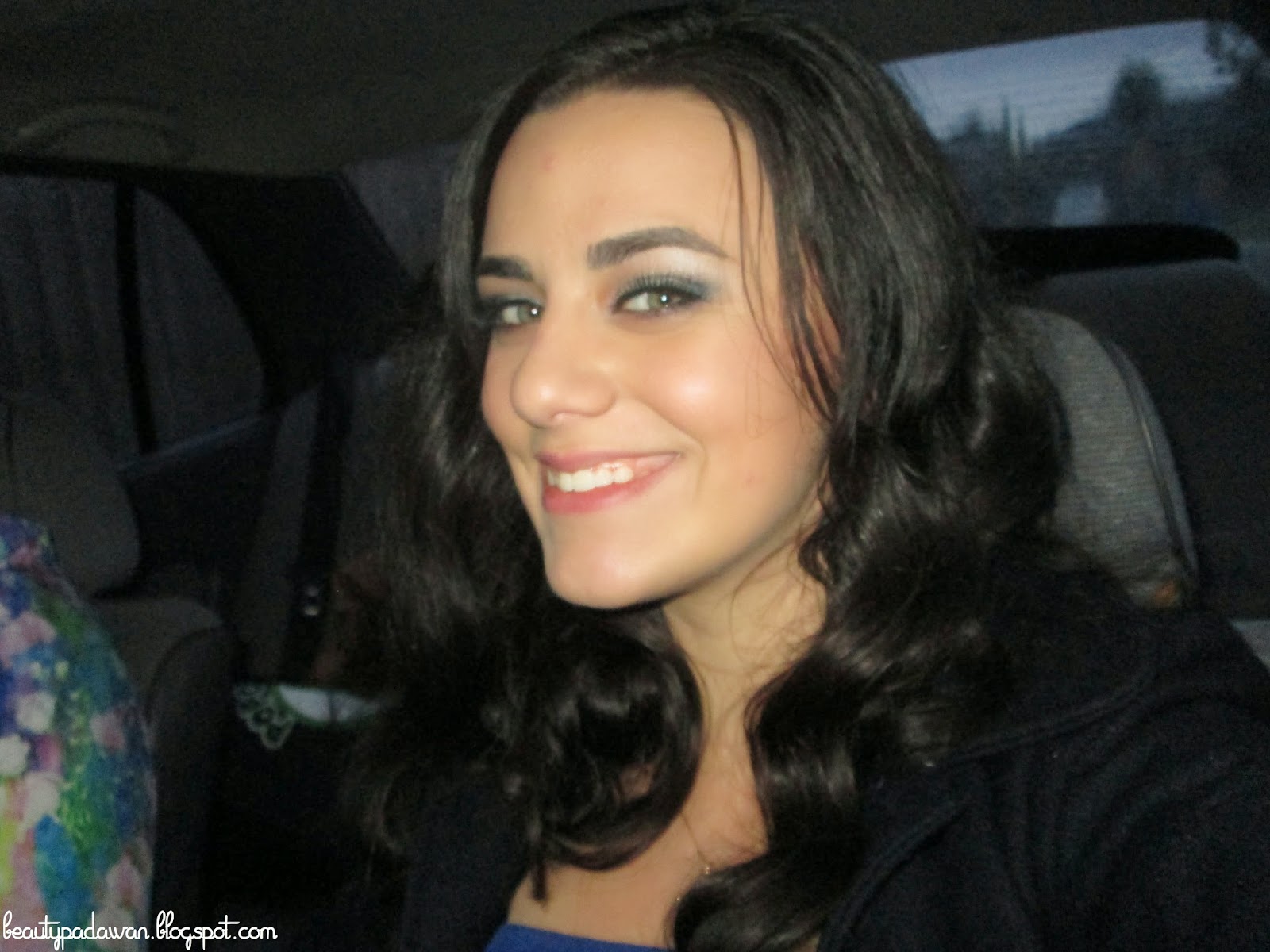 Of course, I can't do a FOTD post without going a little more into the event itself! The concert was great fun -- the opening act, Grace Potter and The Nocturnals, were absolutely amazing, I'm going to buy some of their stuff on iTunes -- and John Mayer, of course, gave a great performance and was rather funny. I'd managed to get us good seats in the upper sections, and our view wasn't hampered﻿. We bought t-shirts (of course), I had a cheeky frozen daiquiri (woo!) and we ended the night with a sleepover and a midnight Maccas run.
This post probably has enough written for a novella by now, so I'll finish it off by revealing how much makeup crap stuff owned to Amy! 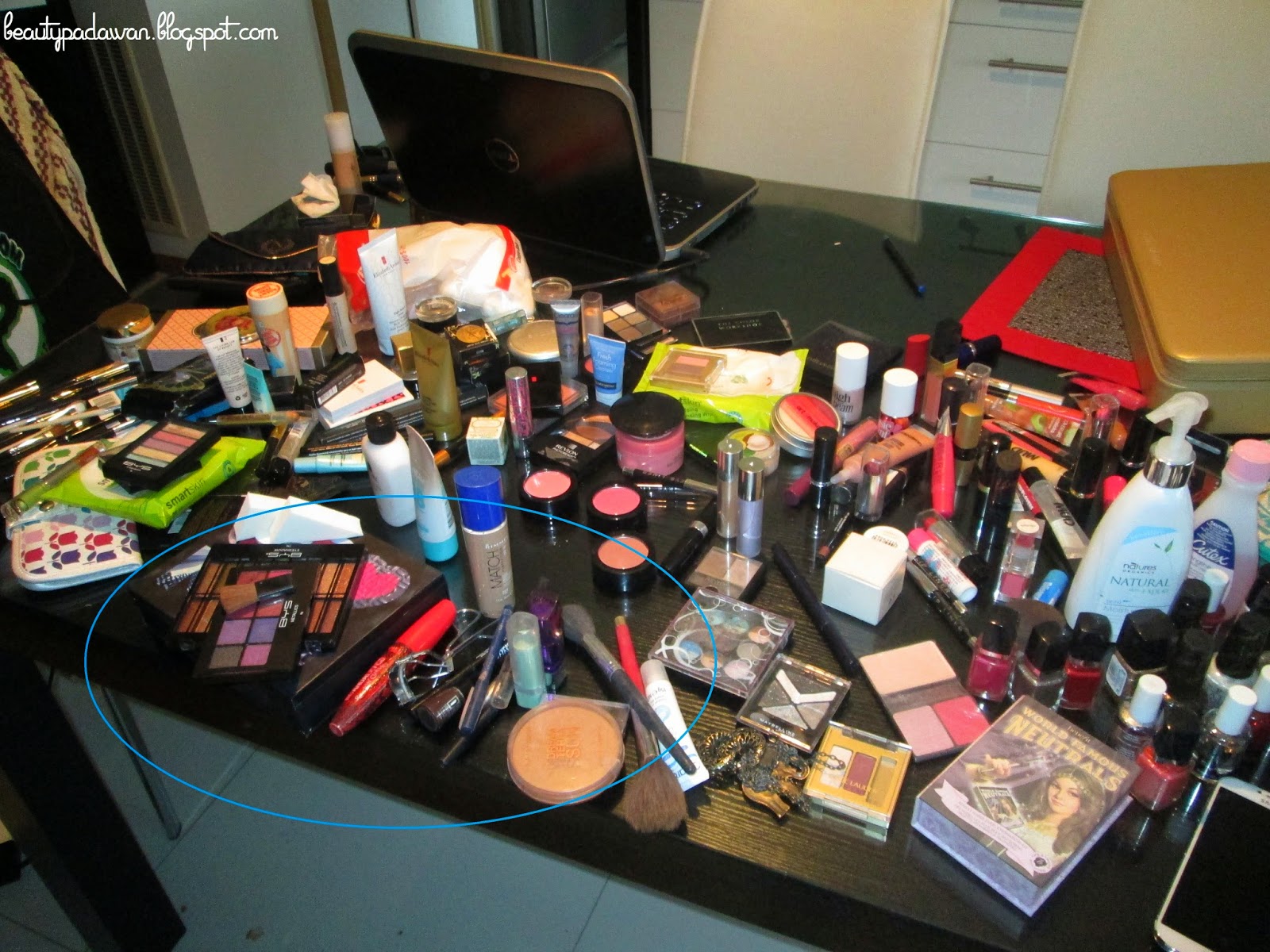 Have you seen John Mayer live in concert?
Sarah xo﻿
Posted by Shae Barry at 22:41