I know that I'm a day late with this post, being Thursday (in my part of the world, anyway) but I was so busy and tired last night that... blagh. I didn't get around to doing anything.

This recipe, like probably everything I decide to cook, isn't very hard but it's probably not something you're going to make if you're in a hurry. It's supposed to take about forty minutes to an hour, but I'm always very slow when I'm working with unfamiliar items, so it took me considerably longer. I believe that the end result was alright -- I raced out the door to Zumba five minutes after I finished cooking, so I only got to taste test a little, but I didn't hear any complaints from the family which is good.

It's also vegetarian-friendly, if you're the type that's happy to eat cheese and butter. If you're not, it's obviously not going to be for you. 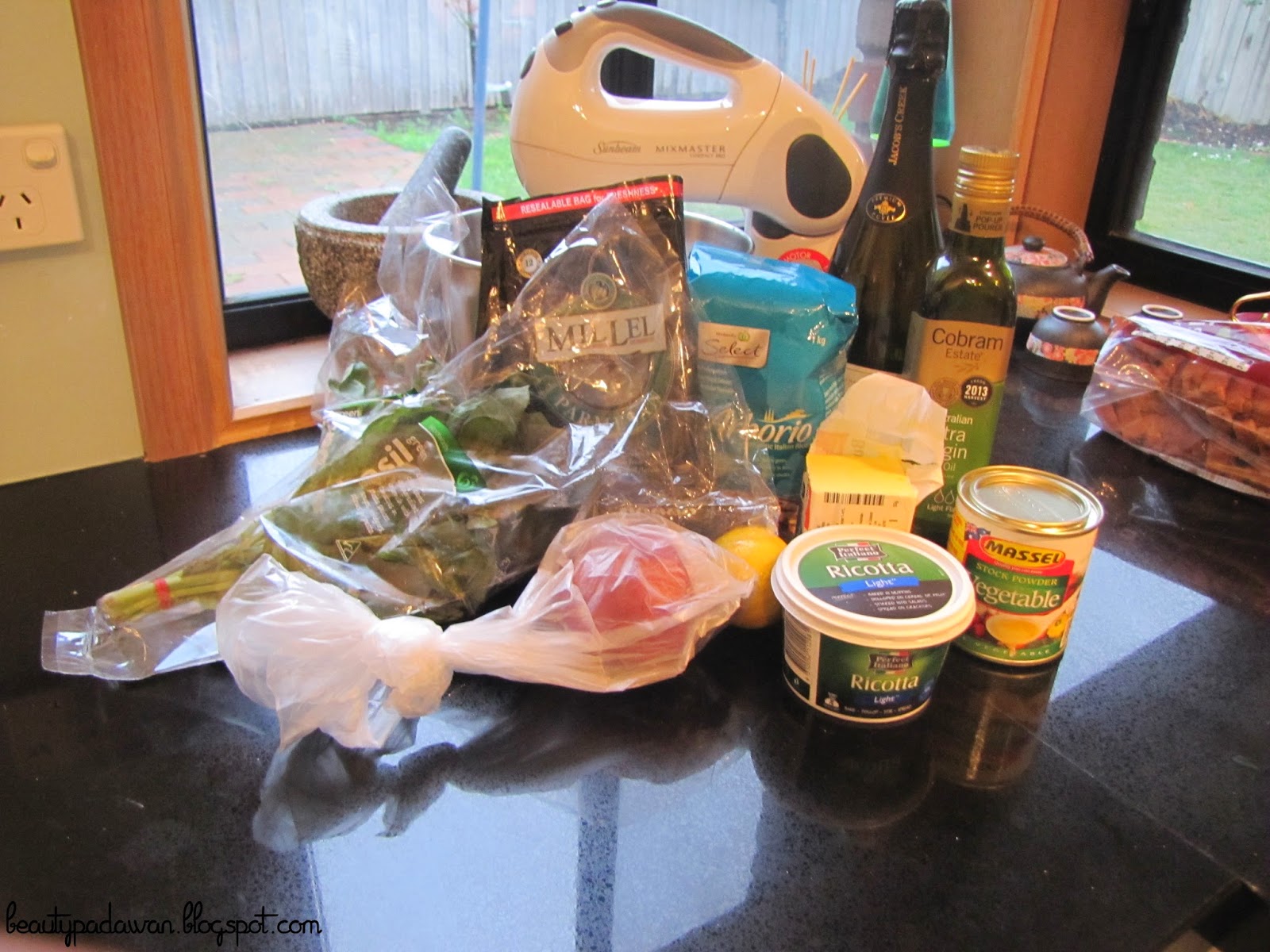 Here are all the delicious things you need. I ended up not using everything, but this was partly because I forgot. The good thing about these ingredients is that they're very general products. You won't need anything that comes only from a specialty store!


Ah, wine. My cooking nemesis. It took me ten minutes to locate this thing in my pantry, and another five to make sure that it actually was white wine. Unfortunately, I also had the misfortune to see that the website I called listed it as "sparkling wine". That means fizzy, right? I didn't know that wine came in fizzy forms -- but then again, I didn't know that chardonnay was wine at all. You should've seen the fun I had opening this thing.


Even the onions proved to be a difficulty. These made me cry, to my great surprise -- I didn't know red onions could. This is why you won't see me in any of these photos: I had to keep dabbing my eyes with a cloth and my eyeliner went all over the place. In the end, I was basically chopping these very carefully with my eyes closed. Don't do that yourself, kids. 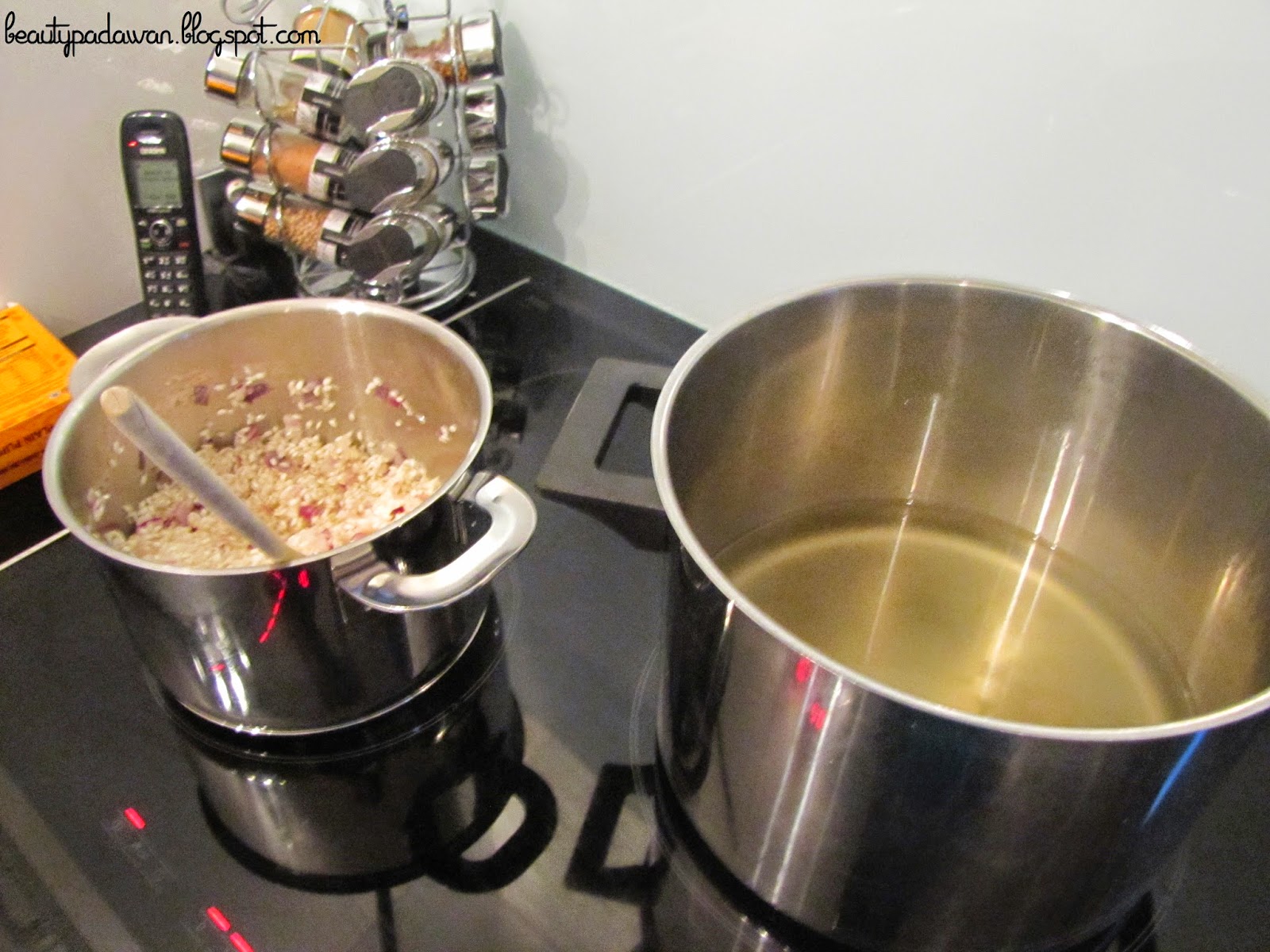 On the left is the pot that I was making the risotto in, and on the right is the pot I had the stock in. Take my advice: don't do it this way. It will take you longer to cook the risotto, and funnily enough, you'll be more prone to making mistakes.
The problem with having the stock in a big pot is that when you're scooping up 1/3 cup measurements to add to the rice, you'll quickly be scooping up such a small amount of stock that you'll naïvely think that there's only a small amount left.
And you'll decide to just dump the rest of it into the smaller pot.


See what I mean? This is probably a little more than 1/3 cup.

I did take a few shortcuts when making this recipe. My family eat a lot, so I always double any recipe that claims to serve 4. However, I was rushing a bit, so I left out things and only used half the amount I needed for other things -- sometimes deliberately, sometimes accidentally. Here are the things to consider with this recipe, whether you're making the original one (which you can also find online here) or doubling it:
As always, I've included the original recipe below. Please, if you can, don't be like me and leave out one of the titular ingredients. You feel silly serving up "Lemon, Basil & Ricotta Risotto" without the ricotta.

And there we have it. Have you accidentally left out the main ingredient for a recipe before? Have you cooked with white wine before? Let me know!