If you'd told me six months ago that I would've lined up to go clothes shopping, I would've laughed at you. I don't really go shopping for clothes that often -- like makeup, it wasn't really something that concerned me too much. Still, lately I've kind of wanted to spruce up my look a little bit by wearing some nicer clothes. Also, I've wanted jumpers, because until June last year I never owned one.

Even so, my plans for Saturday didn't have H&M in them at all. I'd gotten tickets to watch the X-Factor Auditions -- it's been a tradition for me to take my brother and our cousin -- and I'd planned the day for that. It wasn't until my cousin cancelled and my brother got sick on Thursday that I started to think about changing my mind. As it happened, he was better by Friday night, but I still had H&M stuck in my head. I approached the idea of going to the opening instead of X-Factor (after all, it's just a group of people singing and we never watch the show anyway) and he was cool with the idea. We could buy ourselves some awesome clothes, eat out instead of smushing rolls into his backpack, make a real day of it.

Not only am I a Padawan at beauty, but I'm sometimes hopeless at life, too. My camera's battery was dead and for some reason I didn't bother to recharge it, so all of the photos were taken with my ever trusty phone. 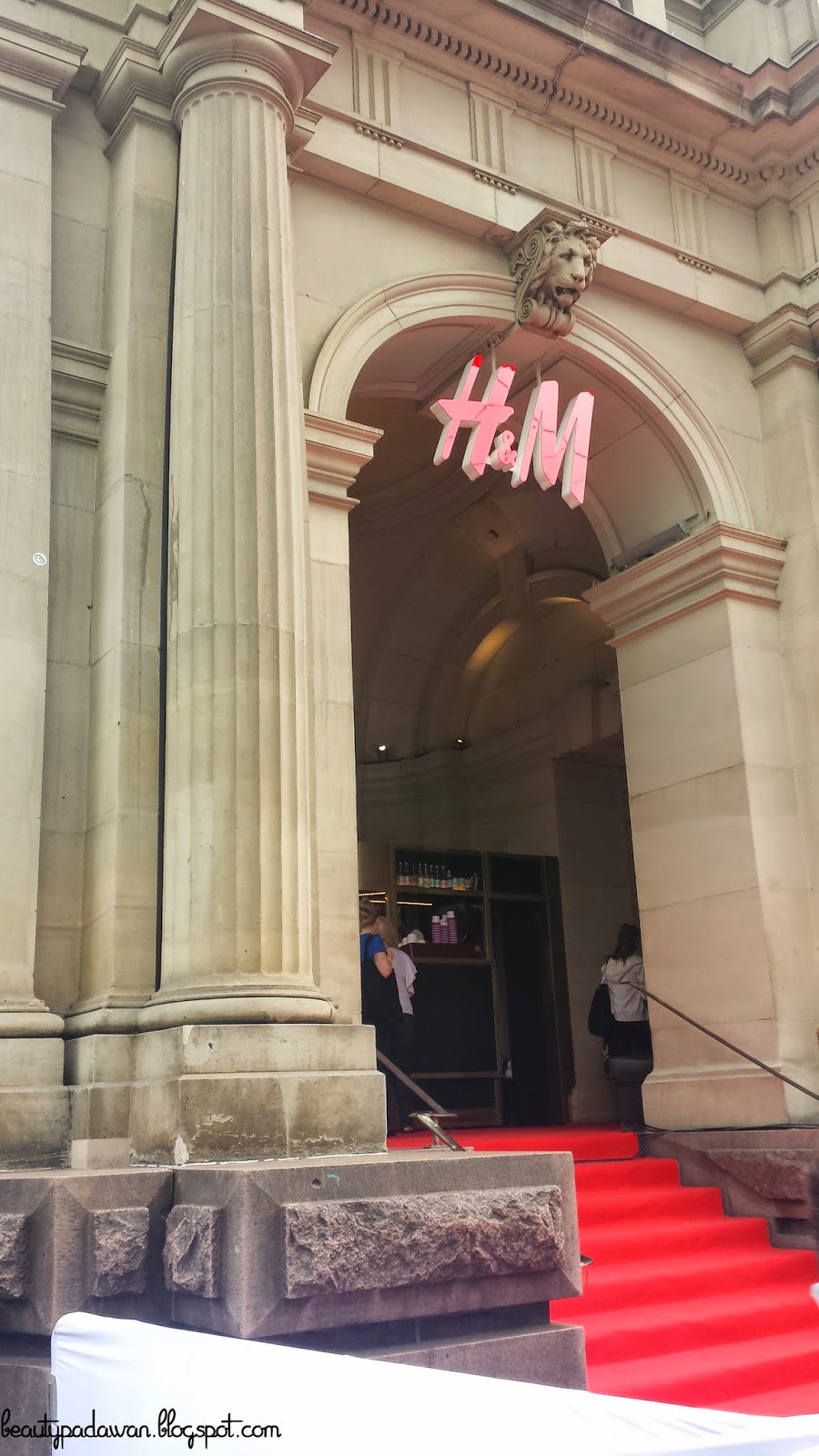 My brother took this before we'd even started lining up for H&M. At the stage, we were trying to find out where the line actually ended! At this stage, people had just started slowly being let into the store (it opened at 10am, we got there about then). We heard that some people had started lining up at 9pm the night before!﻿

This picture marks, not only the cute Easter cooking utensils and adorable teacups, but where my brother and I actually joined the end of the line, which I'm pretty sure was halfway down Lt Bourke Street. Below is a very badly drawn and probably incorrect idea of what I remember the line being like. 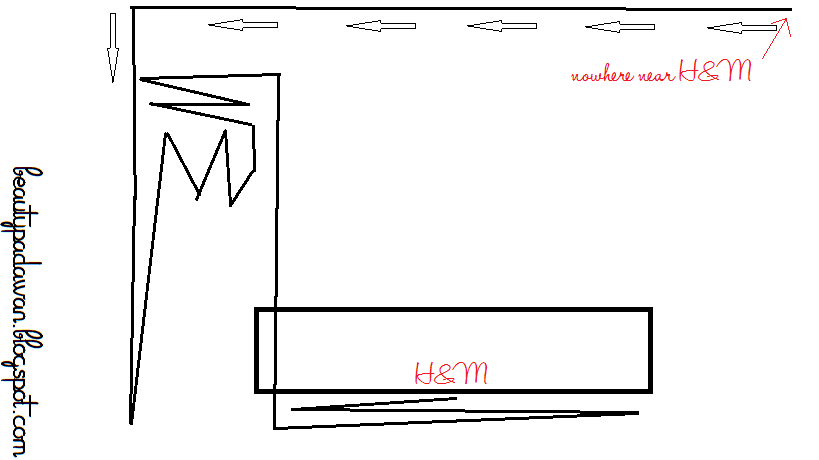 See? It was just all kinds of crazy.
However, despite it being as long as a piece of string, the line moved very quickly. I think total my brother and I waited for a little over an hour and a half, but it really didn't feel that long. It was very organised, there was no confusion.﻿ 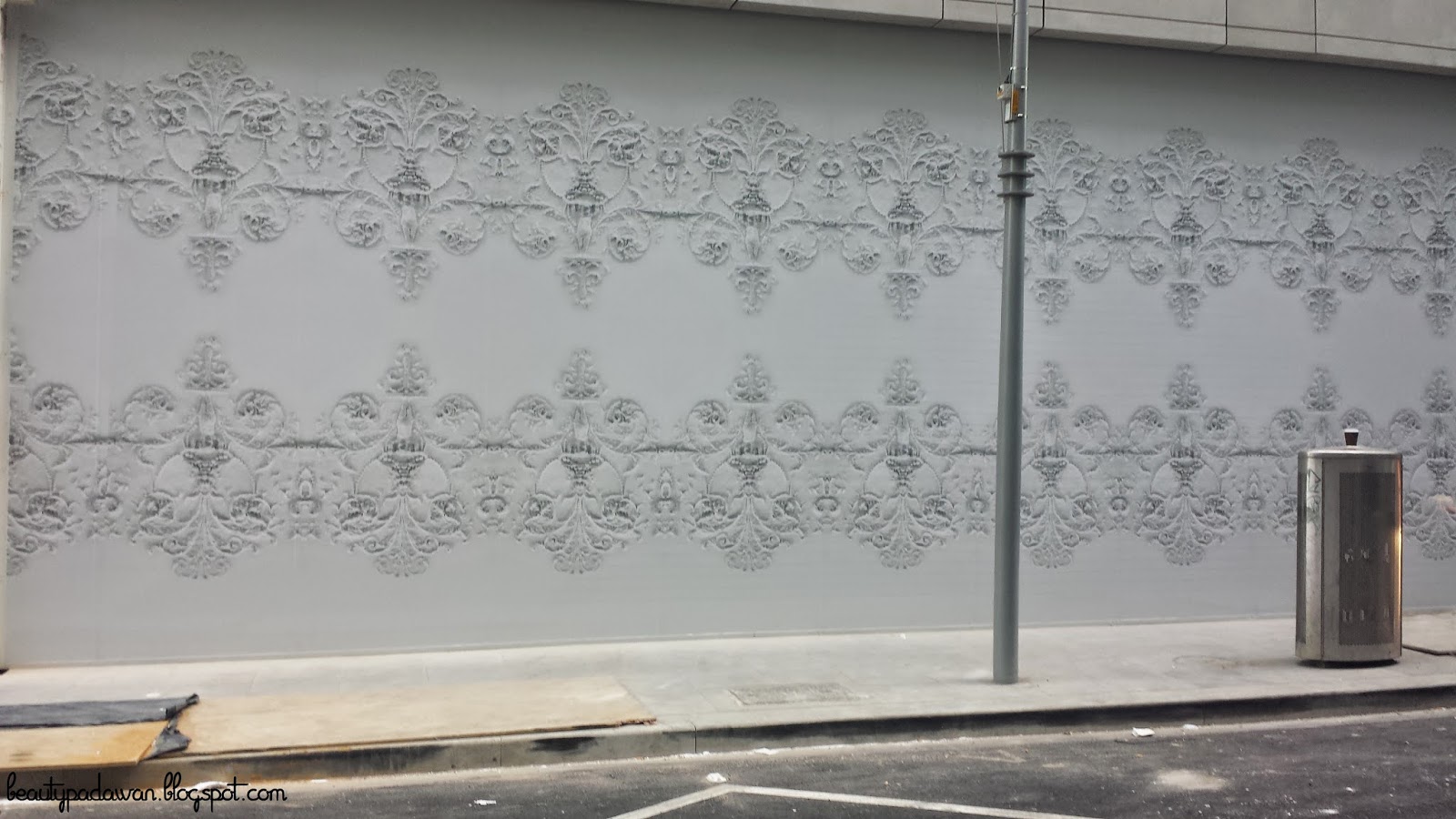 This was a very pretty wall, somewhere near David Jones, I think. I just had to take a picture of it. 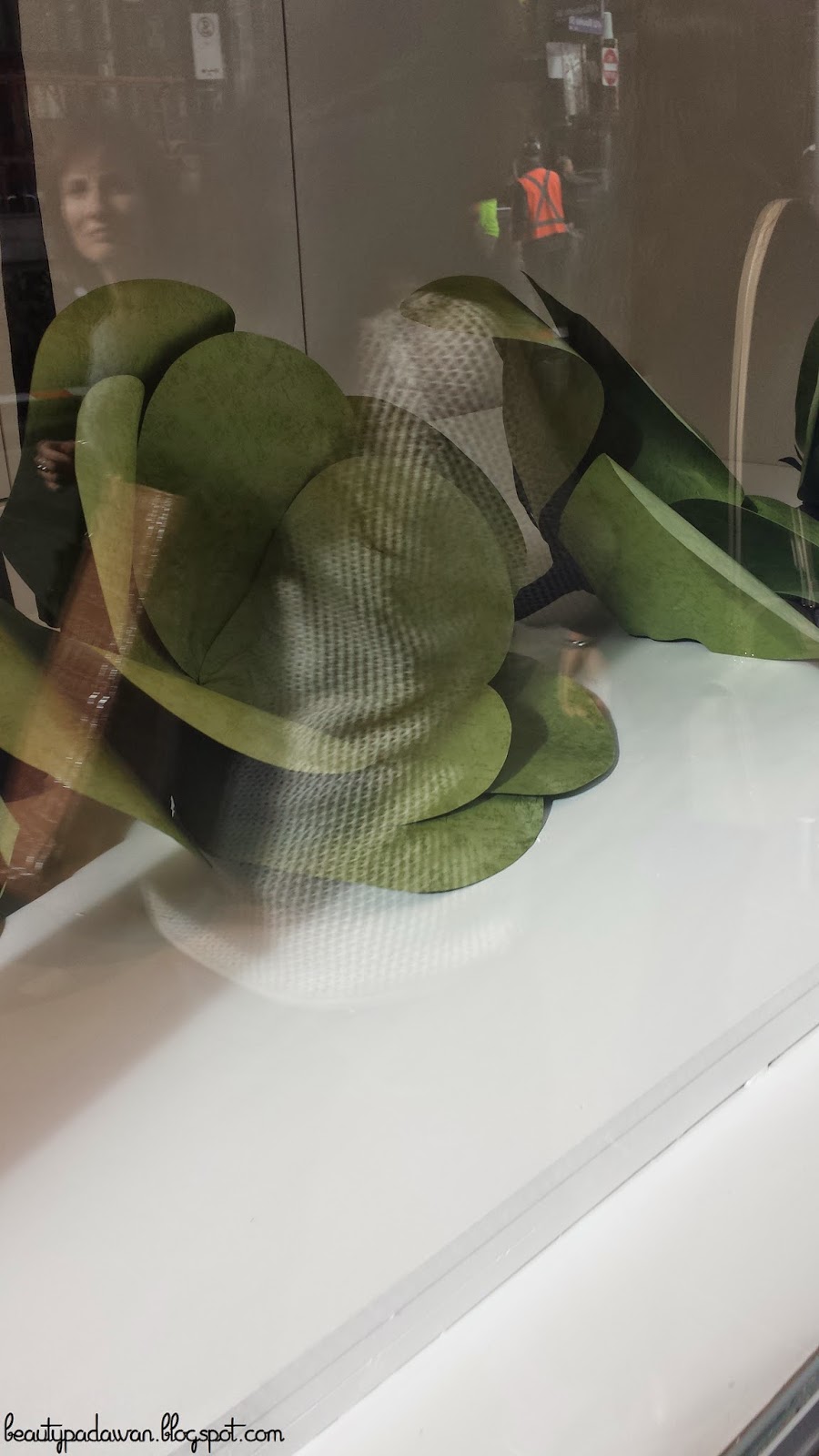 When we started reaching the H&M display windows, you saw a lot of these weird green flower/lilypad things. I thought they were kind of intriguing, although I'm not sure what the whole point of them was. Probably decorational, I'm guessing. I tried to take some photos of the clothes in the shop windows, although the reflective surface of the glass often meant that it looked like I was taking a photo of a building five blocks away.﻿ 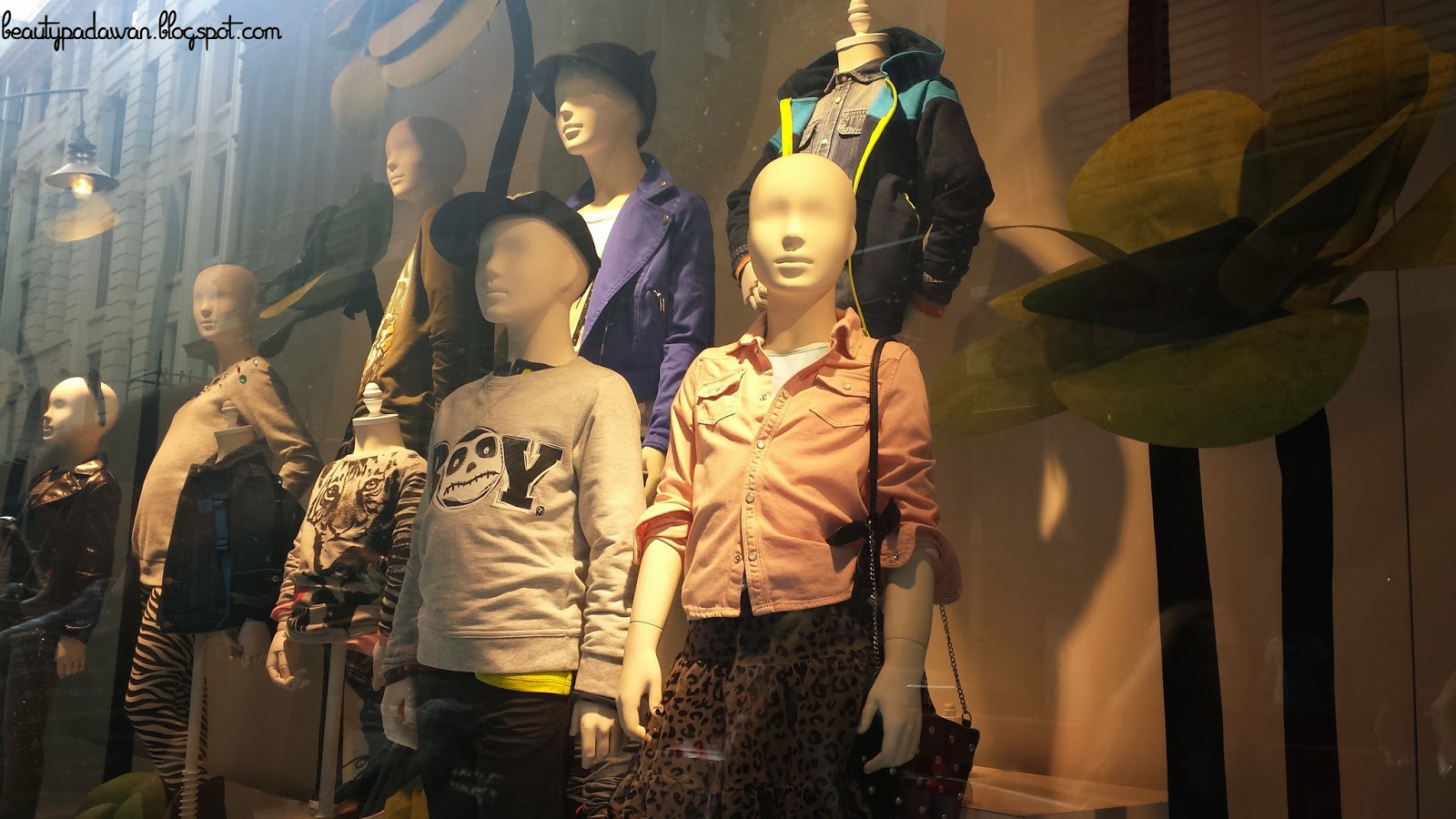 Children's clothes. Nice to see that they looked normal. 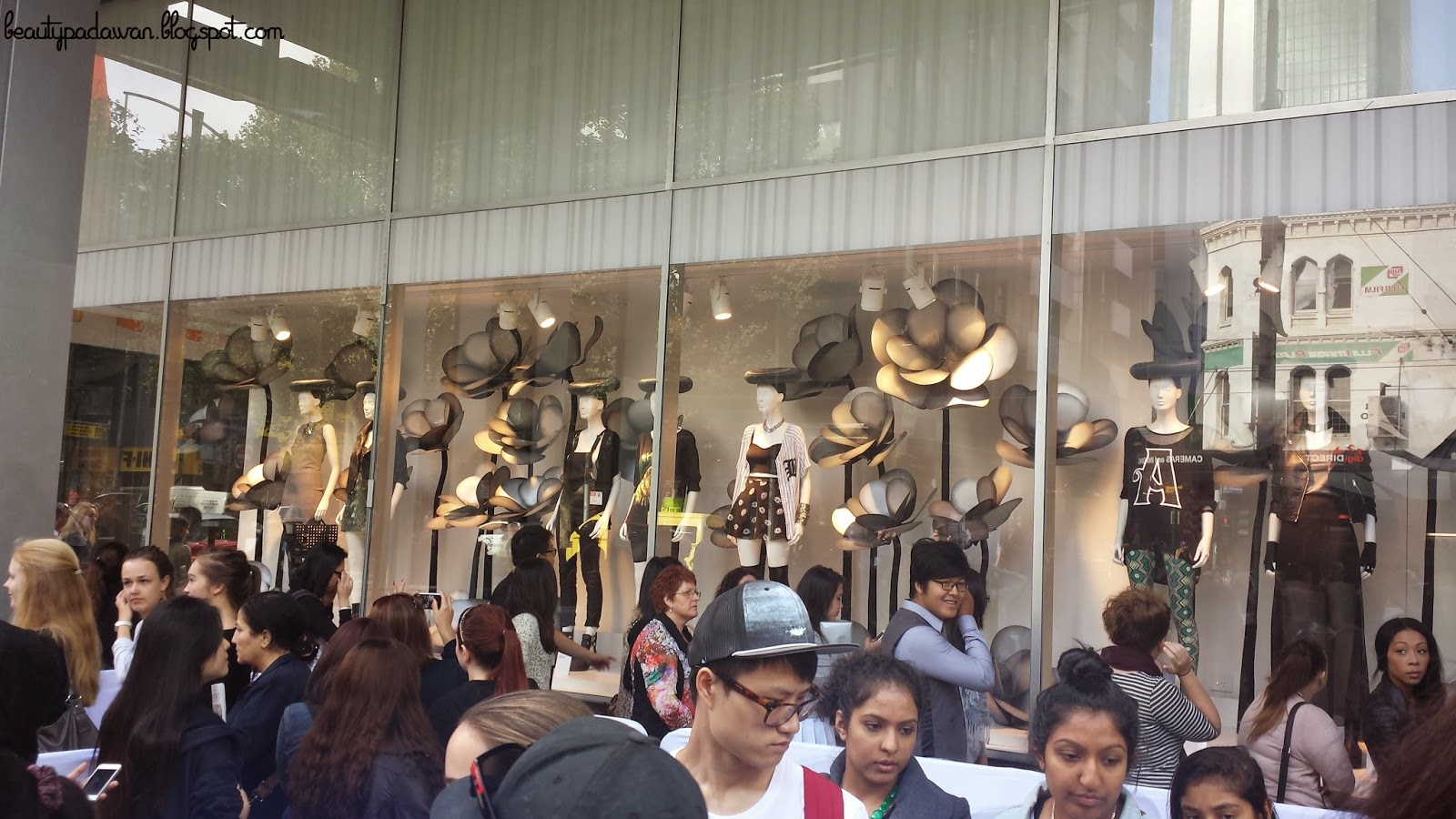 Regular clothes. Not really my style, personally, and I have no idea what's up with the hair thing. 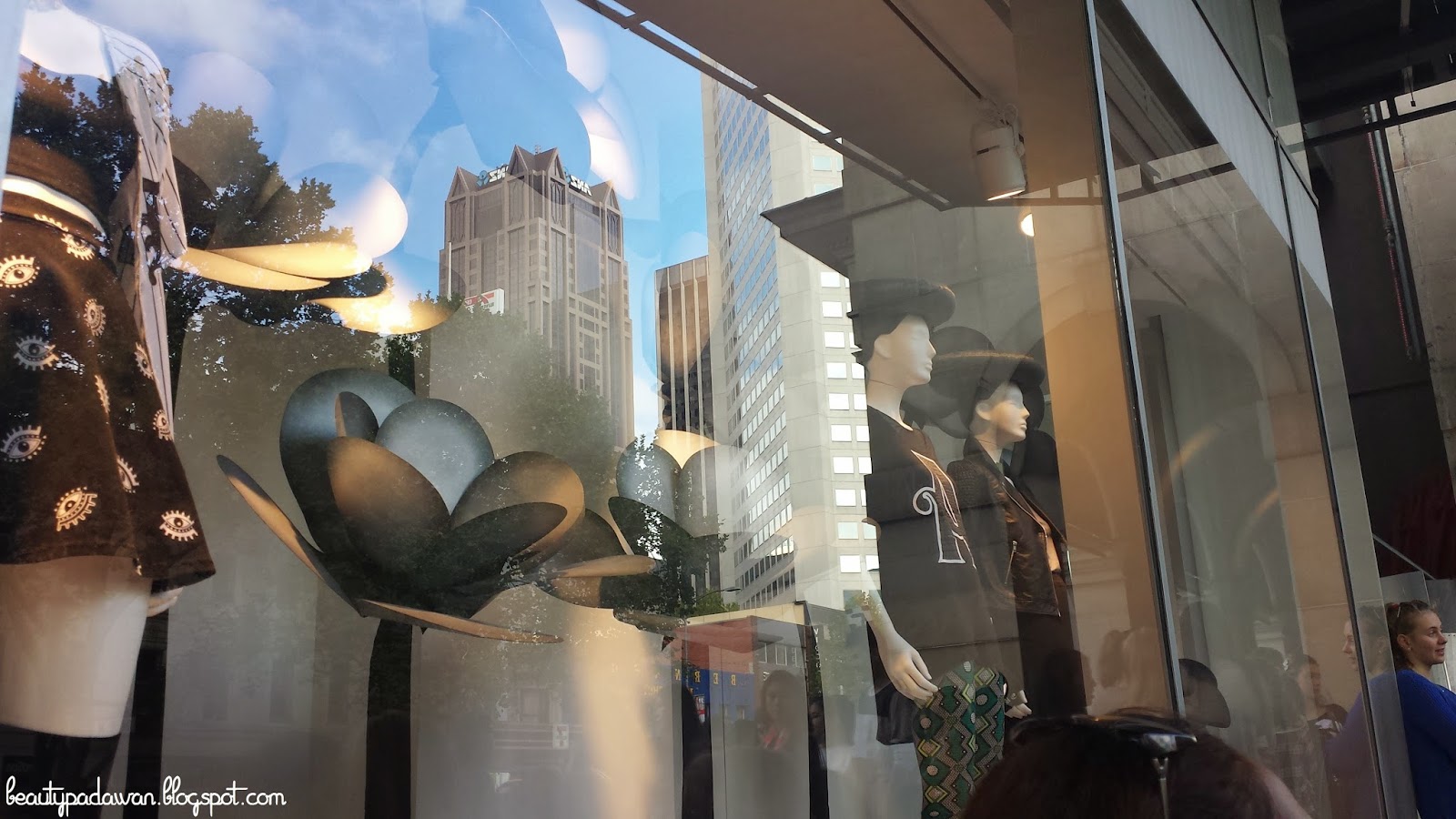 And this is a very lovely photo of the ANZ building. 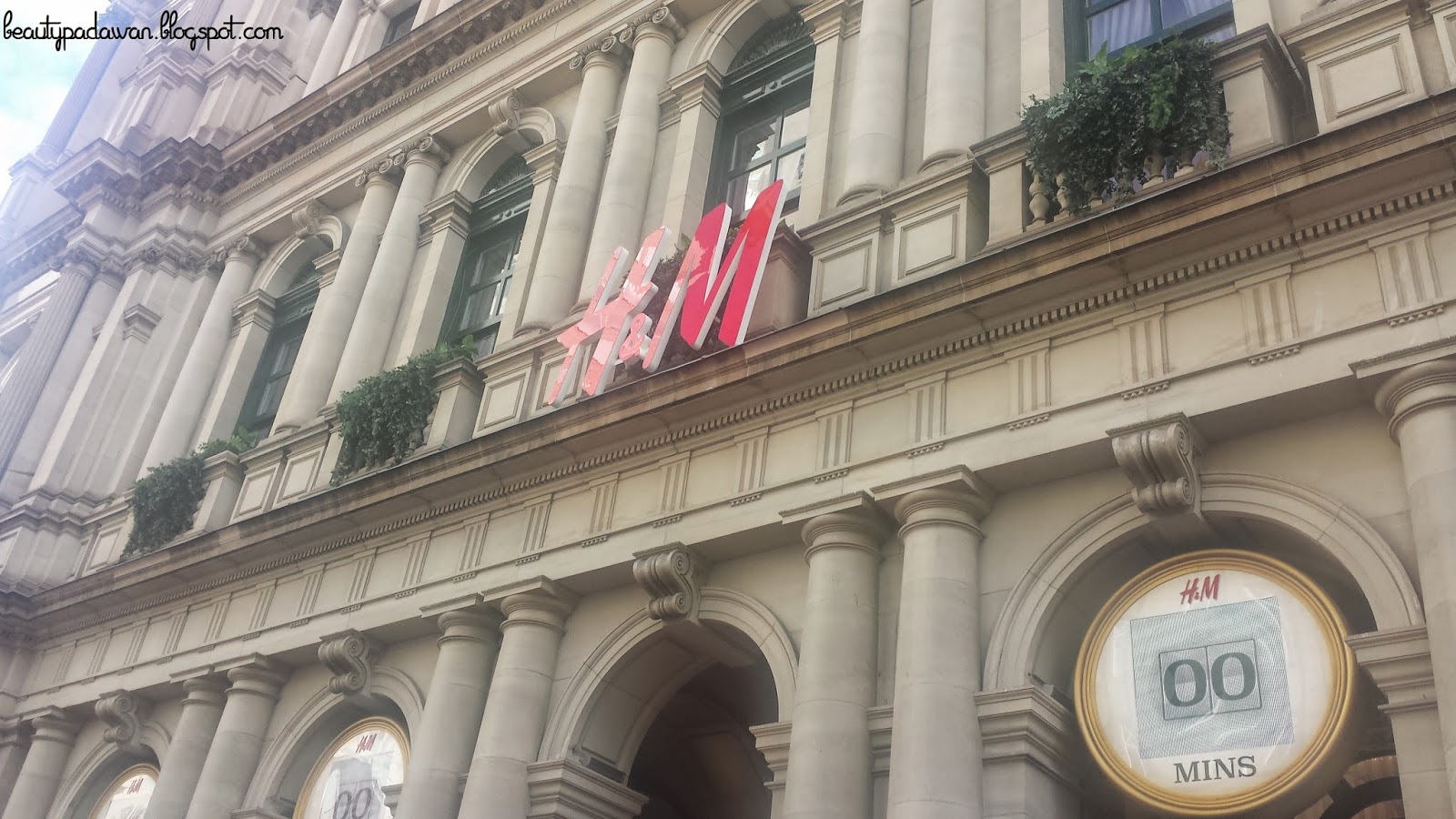 At this point, we were getting closer to the front! 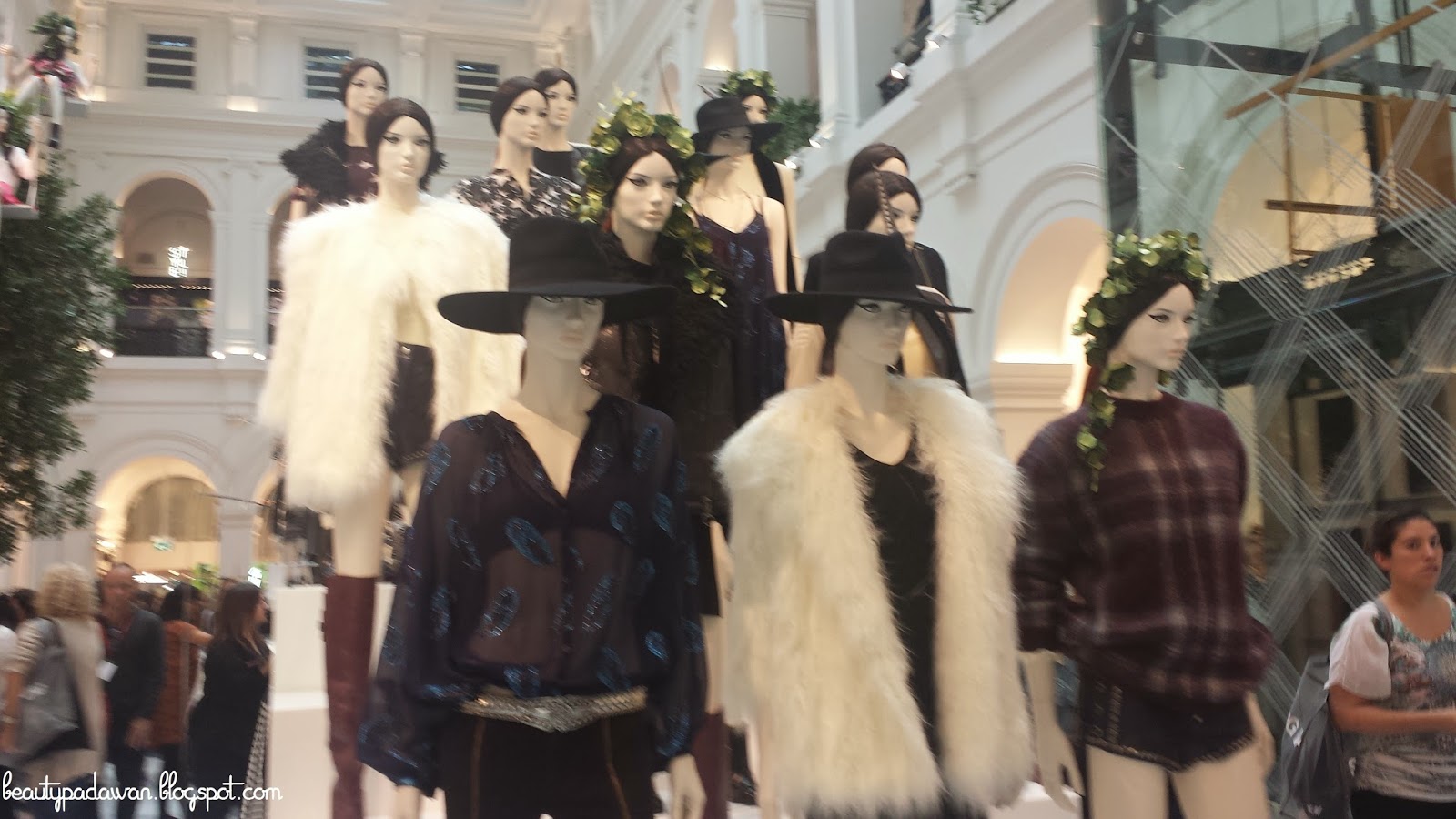 AND WE'RE IN! These clothes looked absolutely gorgeous.
I honestly didn't think that I would be as impressed as I was by H&M. I figured that it might be something along the lines of Zara -- you know, stuff off the runway that didn't really suit my figure or my style or my bank account -- but I was very glad to see that I was﻿ wrong. Some of the basic clothing, such as singlets etc., were $7 -- the same price as Kmart or Big W! You had other items of clothing on the more expensive side (that fluffy white coat, for example, was I think something like $70), but not the three-digit price range I was expecting. The size range was also great, with most items being marked in the style of small, medium, etc.
Shoes and accessories were also very impressive. I remember them having a huge range of flats for $13 (I've bought plainer for more from other stores), which I think is an excellent price. The only downside is that they're marked only with European shoe sizes, so I would recommend finding out what size you are. However, the shop assistants had a very good idea and were able to help me out.
The staff at H&M were very friendly, and given the amount of people pushing and squishing through the store, they were very helpful and had a lot of patience. Unfortunately, the girl I had at the checkout missed a couple of the security tags when I was at the checkout, which resulted in a lot of hassle when I was trying to leave. I had to check the tagged items myself, find a checkout, line up, get them to untag it, line up again to get out -- just, ugh.
Ain't nobody got time for that.
However, the rest of the day went pretty smoothly. I bought several pairs of shoes, and a lot of clothes (for me, anyway). I didn't take pictures of them because... It didn't even occur to me. (Is that the kind of thing that people want to see?) When lining up, I'd gotten a few coupons for a couple of places, including... Pancake Parlour! So guess where we went for lunch?

The Hot Buttered Walnut for me (left) and the Alice in Wonderland for my brother (right).

This thing was a Chocolate on Chocolate Swiss Malt (I think). It was very pricey but DAMN, it's good!
A day out is never complete for a stationery addict without a visit to Typo, and I was thrilled to finally see some notebooks that I liked! Lately they've been stocking covers that were a little too "hipster﻿" (I think) for my taste, but these were all pretty awesome. 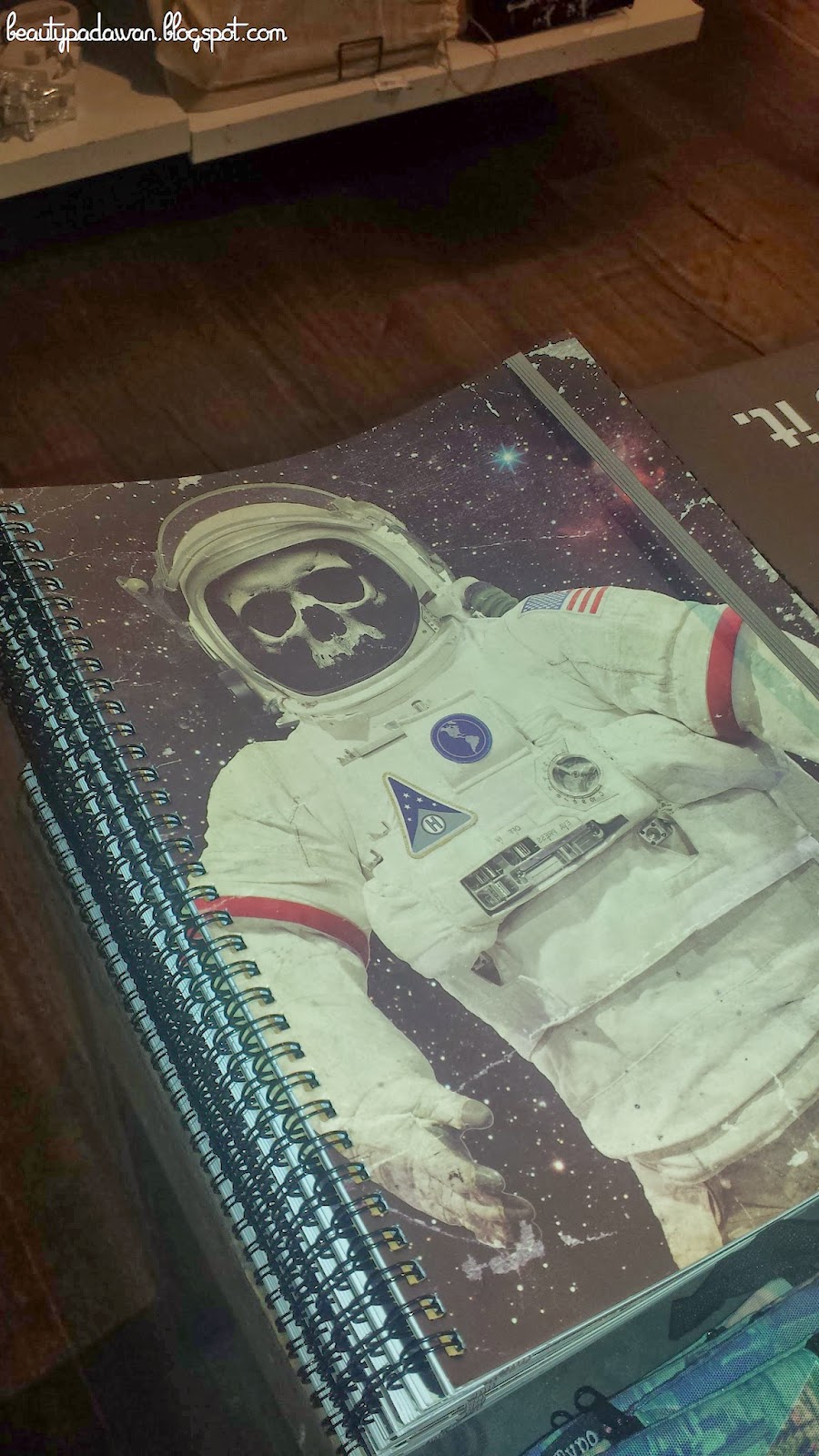 The Vashta Nerada have made it to space! 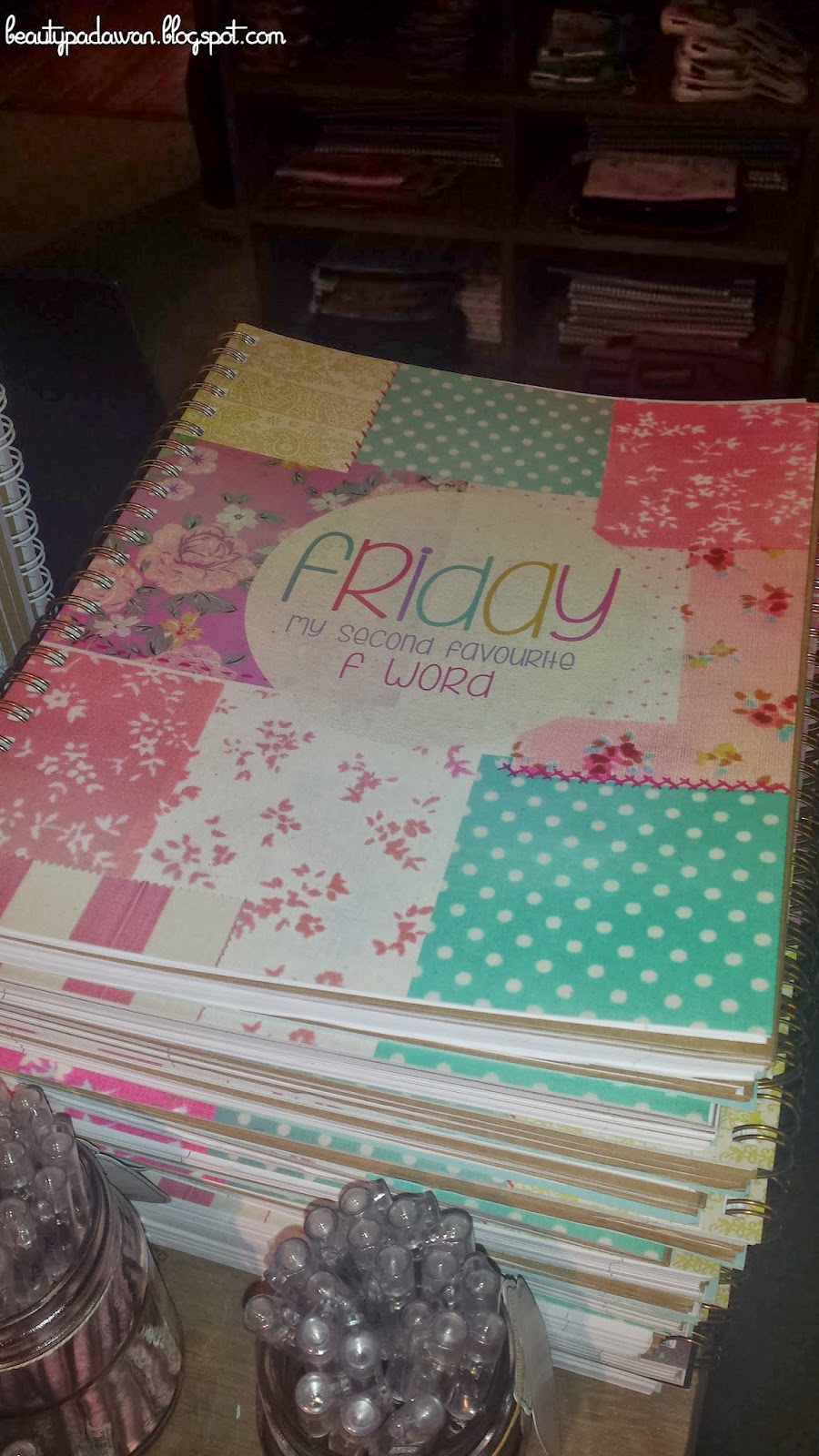 I have a lot of friends who identify with this. 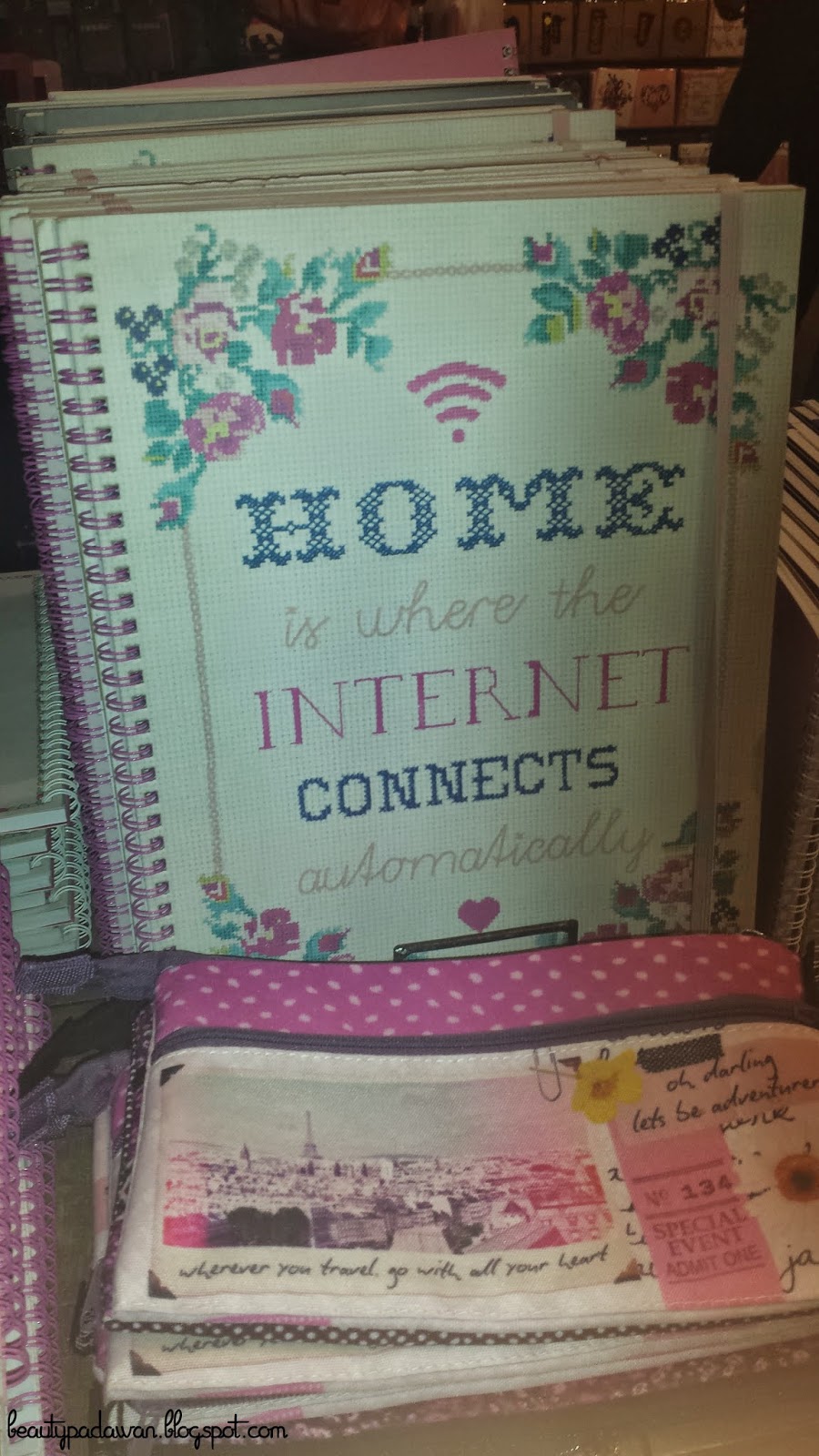 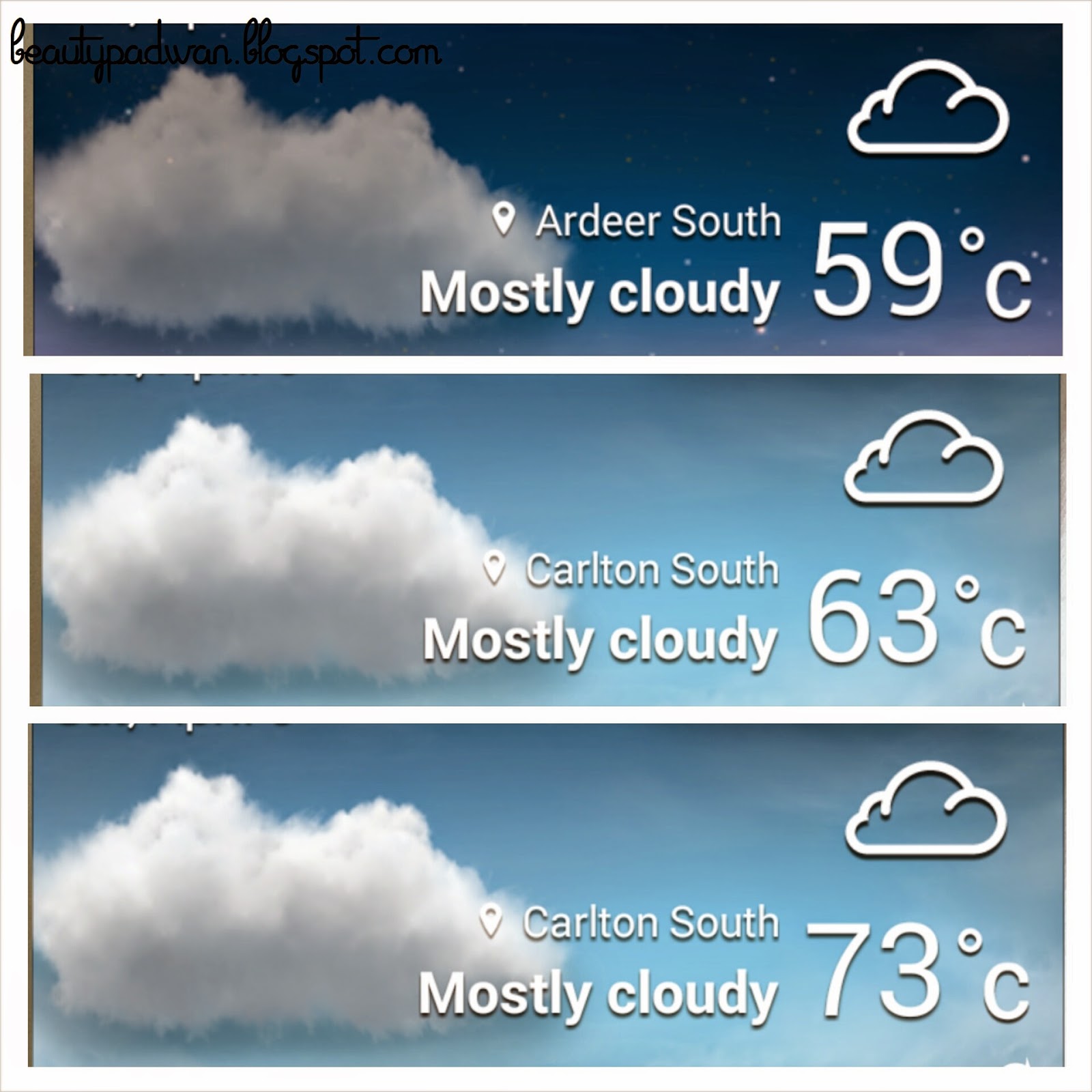 Was there an apocalypse that I didn't know about?

Have you shopped at H&M? Would you be interested in a follow-up post on my purchases? Let me know!