If I were a hip, happening blogger with a smashing following, I would've 1) posted this about two months ago, and 2) not have said "hip and happening", because I'm convinced that nobody really says that anymore. As it is, this little piece of the internet is tiny and rather insignificant compared to many, many others out there -- it's a sprinkle on the donut, a drop of tea in the pot, a crouton in the salad. (I've got loads more where those came from, but I'll stop before I get too carried away). There's also the fact that I'm not the greatest when it comes to putting looks together, and I had to research to find a few products -- which I then had to scrimp and save for (because MAC kept getting in the way with their fancy collections).

Get to the point, Sarah.

Marie Claire's August cover featured Keira Knightley, who, let's face it, is probably the most gorgeous woman in the history of gorgeous women. If it weren't for her, I probably wouldn't be the person I am today -- after all, if 13-year-old Sarah hadn't happened to see her on the movie poster for Pride and Prejudice and thought, 'Hey, this is a boring story [not that I knew the story] but she's really pretty, so I'll go watch it' then Sarah wouldn't have discovered Jane Austen and the pure magic that are her novels. Jane Austen led to other novels that led to history books that led to Shakespeare that have turned me from... well... I have no idea.

As soon as I saw the cover, I thought to myself, 'Hey, this is a look that I think I can actually do!' Since then, I spent numerous hours peering at her skin, at her eyes, wishing my eyes could zoom in and magnify on the details that I hoped my Padawan brain would recognise. My 'interpretation' is called that because I know it's not exact. I tried to get as close as I could using products I already had, although there were one or two items I bought especially (such as the most expensive mascara I've ever seen in my life). 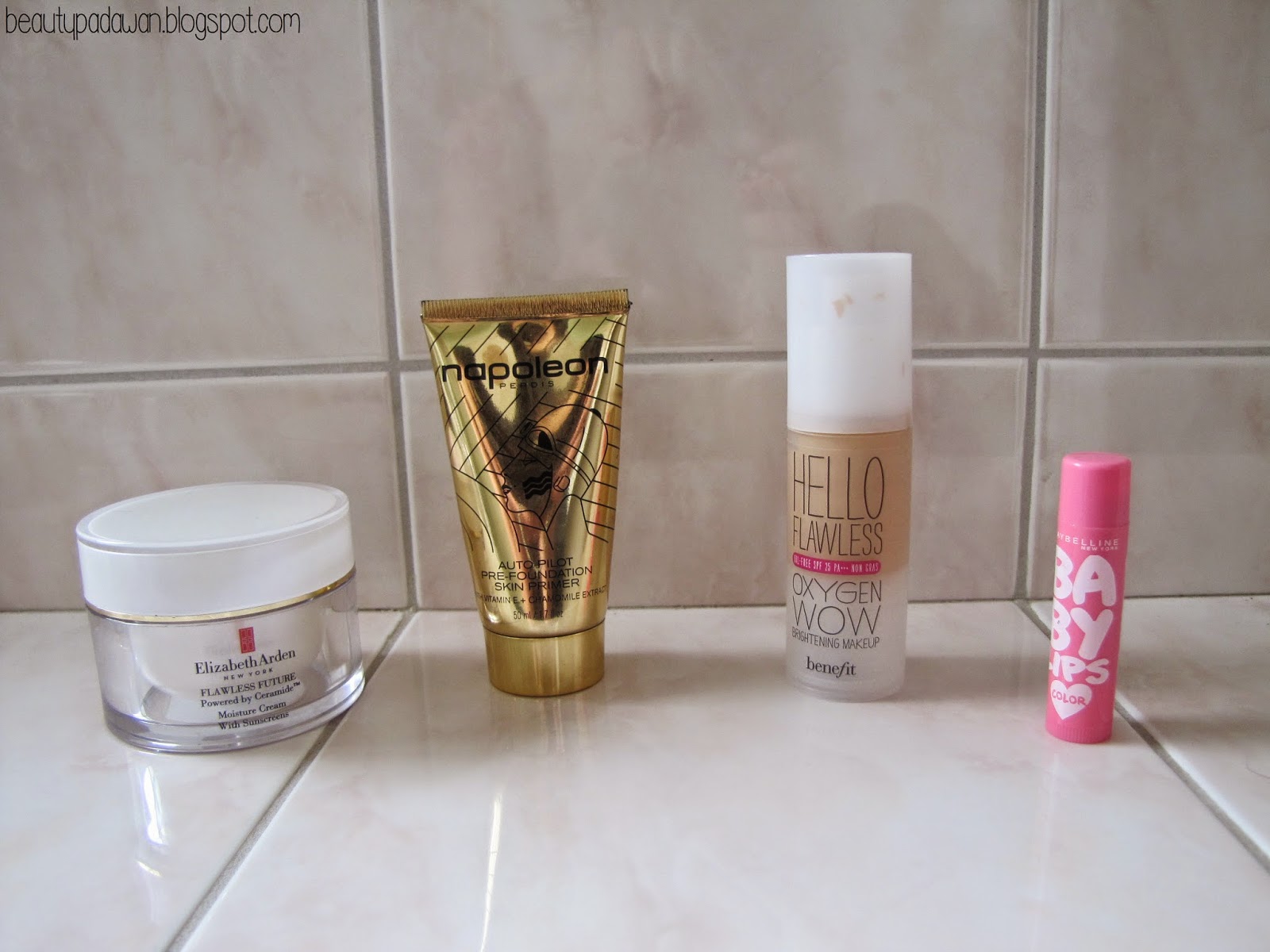 The first thing my brain tried to comprehend was Keira's skin. I didn't think it looked too matte, but with a kind of glow to it. (Said brain cannot believe I just wrote something like that.) I've had a little bit of dryness lately so I started with Elizabeth Arden Flawless Future Moisture Cream, before using the Napoleon Perdis Auto Pilot Pre-Foundation Skin Primer, which is supposed to give a kind of 'lit from within glow'. I know that my MAC foundation can look matte even with such a primer, so instead I used the Benefit Hello Flawless Oxygen WOW Foundation in "Champagne" with the Real Techniques Stippling Brush, to give a more flawless finish (so they say). I don't actually like this foundation very much anymore -- I think it's a bit too dark -- but I've noticed when using it in the past that it gives your skin a more dewy finish (so my brain says), so I thought it would work well for this look.

I wanted to let my foundation set, so I moved onto my eyes -- but before I did that, I prepped my lips with a Maybelline Baby Lips Lip Balm in "Pink Lolita", so that they'd be all nice and smooth by the time I was ready for that final slick of gloss. (Because spoiler alert: I use gloss.) 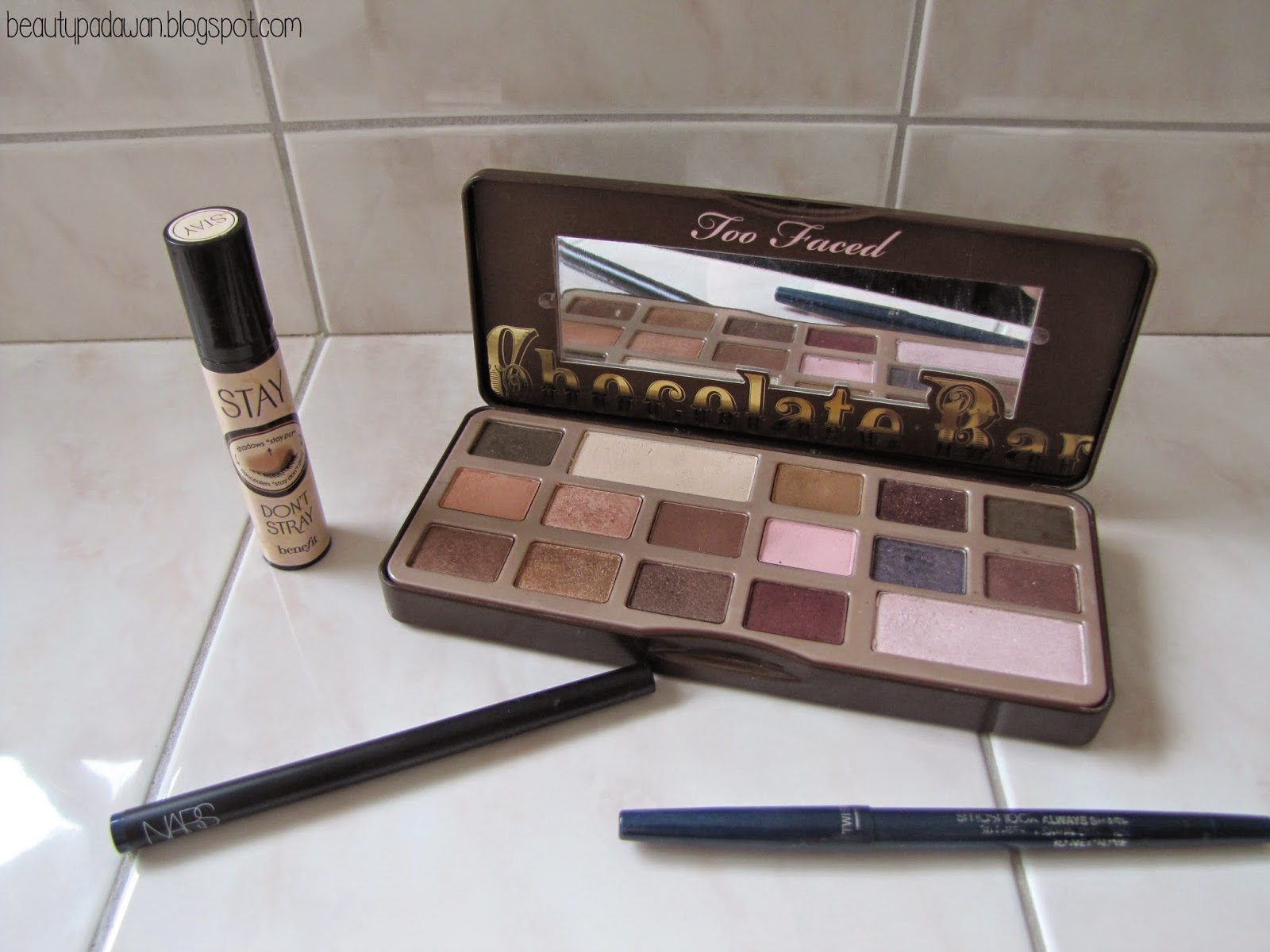 Keira's eye shadow looked mostly brown -- it was a little hard to see given that all of the photos were only side-on. I started off with Benefit Stay Don't Stray eye primer, which I really like because it gives some coverage over my eyelids. My eyelids are really oily and this usually helps with creasing a little better than Shadow Insurance. Then I used one side of a Real Techniques Base Shadow Brush with "White Chocolate" from the Too Face Chocolate Bar Palette and placed it in my inner corner. I'm not quite sure why I did this, it just popped into my head. Then, using the other side of the brush, I put "Black Forest Truffle" over the rest of my eyelid, mixing it with a little "Semi-sweet" to make it a bit more brown. 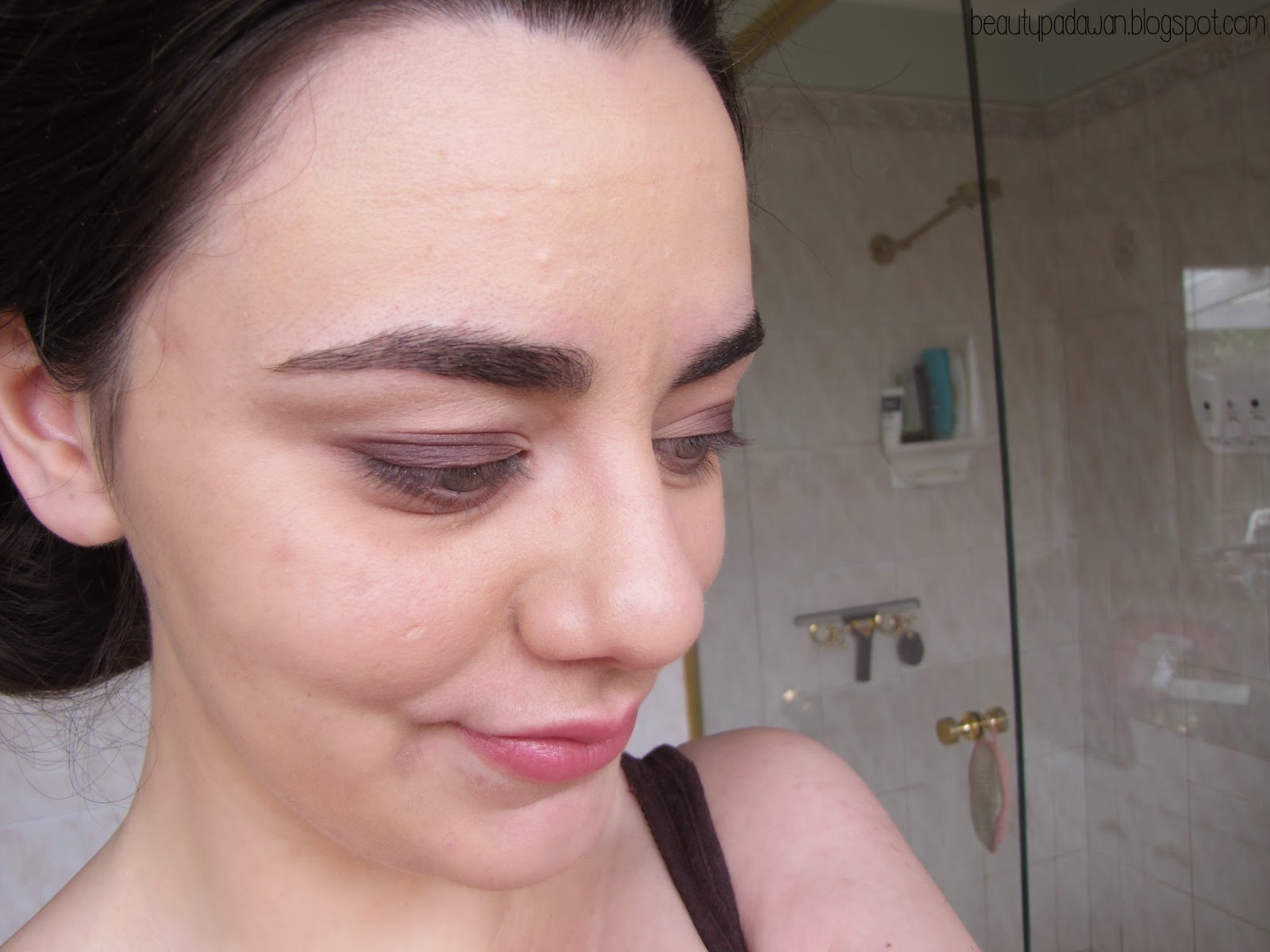 Using a Mecca Cosmetica Domed Eye Blending Brush, I ran "Salted Caramel" into my crease so that the colours would blend together a little better. I patted on the mix of "Black Forest Truffle" and "Semi-sweet" on my lids again if some of the colour disappeared somehow. When I was happy with how it looked, I used a Mecca Cosmetica Eye Contour Brush to put "Triple Fudge" into the outer corner.

What comes next is probably my favourite part. Keira had dark blue liner on -- to me, it had the wet look of a liquid liner, but nowhere I looked seemed to have anything that seemed close. After much deliberating and eventual swatching, I decided that the NARS Eyeliner Stylo in "Atlantic" was my best bet, so I used that to line my upper lashes. I thought that Keira also seemed to have liner on the bottom, so I used the Smashbox Always Sharp 3D Eyeliner in "Neptune" along my lower lashline -- I thought this would fit as the glittery particles would reflect the light in a similar way to a liquid liner. 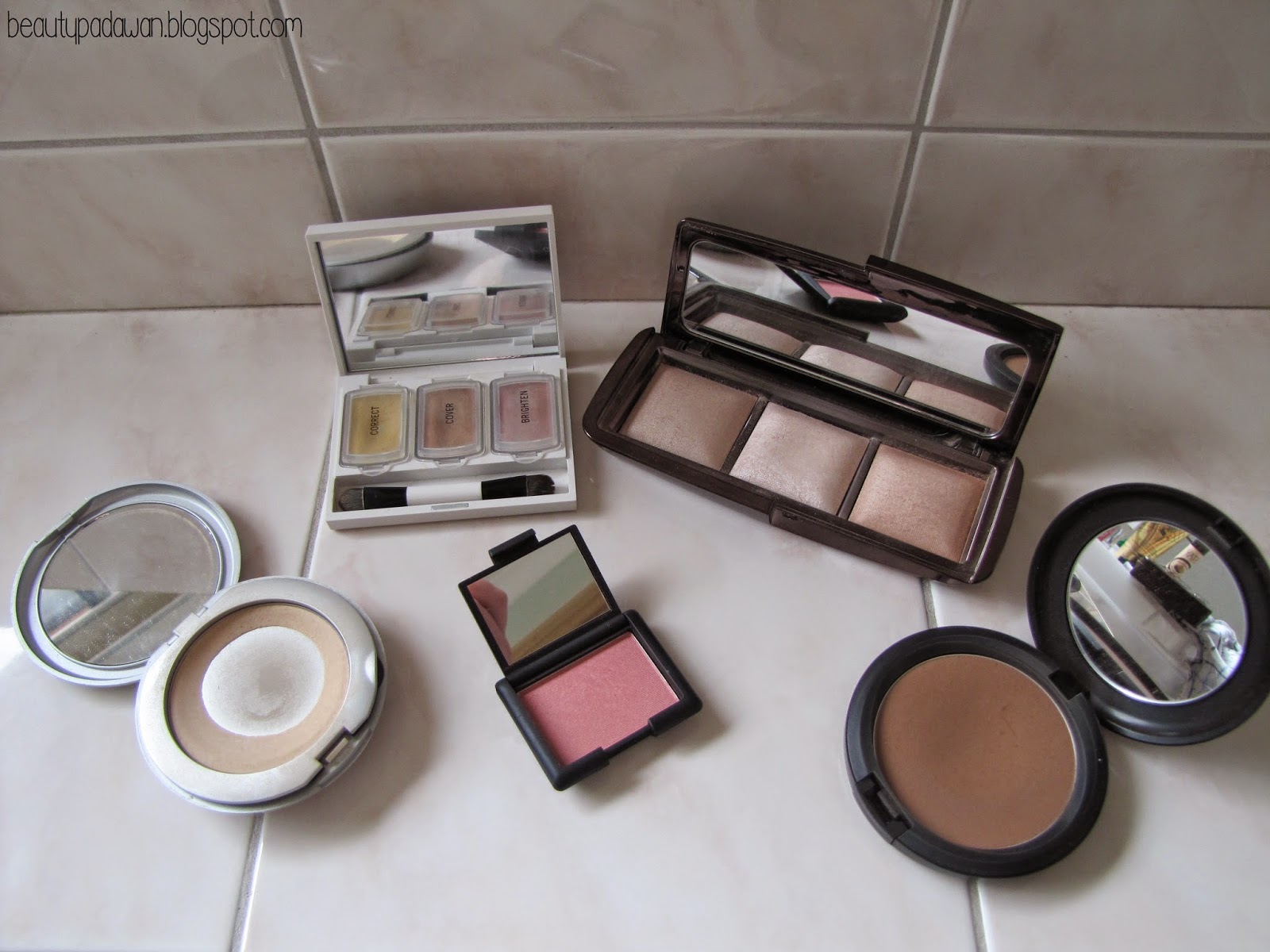 From there, I moved onto the rest of my face. I've been having a weird skin week where something has irritated and dried the skin on the side of my lips (making me look a little like a puppet, to my dismay), so I used the Benefit Perk Up Artist concealer palette to cover up that and all any blemishes. I then took my EcoTools Custom Coverage Buffing Brush and lightly applied Stila Illuminating Powder in "30 Watts" all over my face. At first I didn't think that Keira had much contouring done, as she already has killer cheekbones -- and then I remembered that that was the thought of a Padawan, and that the makeup likely helped those cheekbones. So, I used the powder end of a dual-ended powder blush brush with MAC Bronzing Powder in "Matte Bronze" to try and accentuate what I could of my own cheekbones.

I think Keira has a very light, natural looking blush on her -- if she's got any at all -- so I very lightly used NARS Blush in "Deep Throat" with an angled blush brush along my cheeks; enough to give off a little of the pinky-peach colour. I was a little more confident with the highlighting. When I originally did a test-run on this look, I dotted Benefit High Beam sparsely along my cheeks, then rubbed it in with my fingers. However, I could see the line where the highlighter ended (if that makes any sense), so I took my EcoTools brush and lightly buffed in "Incandescent Light" from the Hourglass Ambient Lighting Palette to blend it together.

Can't lie, I forgot all about High Beam when doing this look properly for the post, so I used "Incandescent Light" on its own -- I applied it to the tops of my cheek bones, the bridge of my nose and my cupid's bow with my Rae Morris #22 Pro Powder Brush. 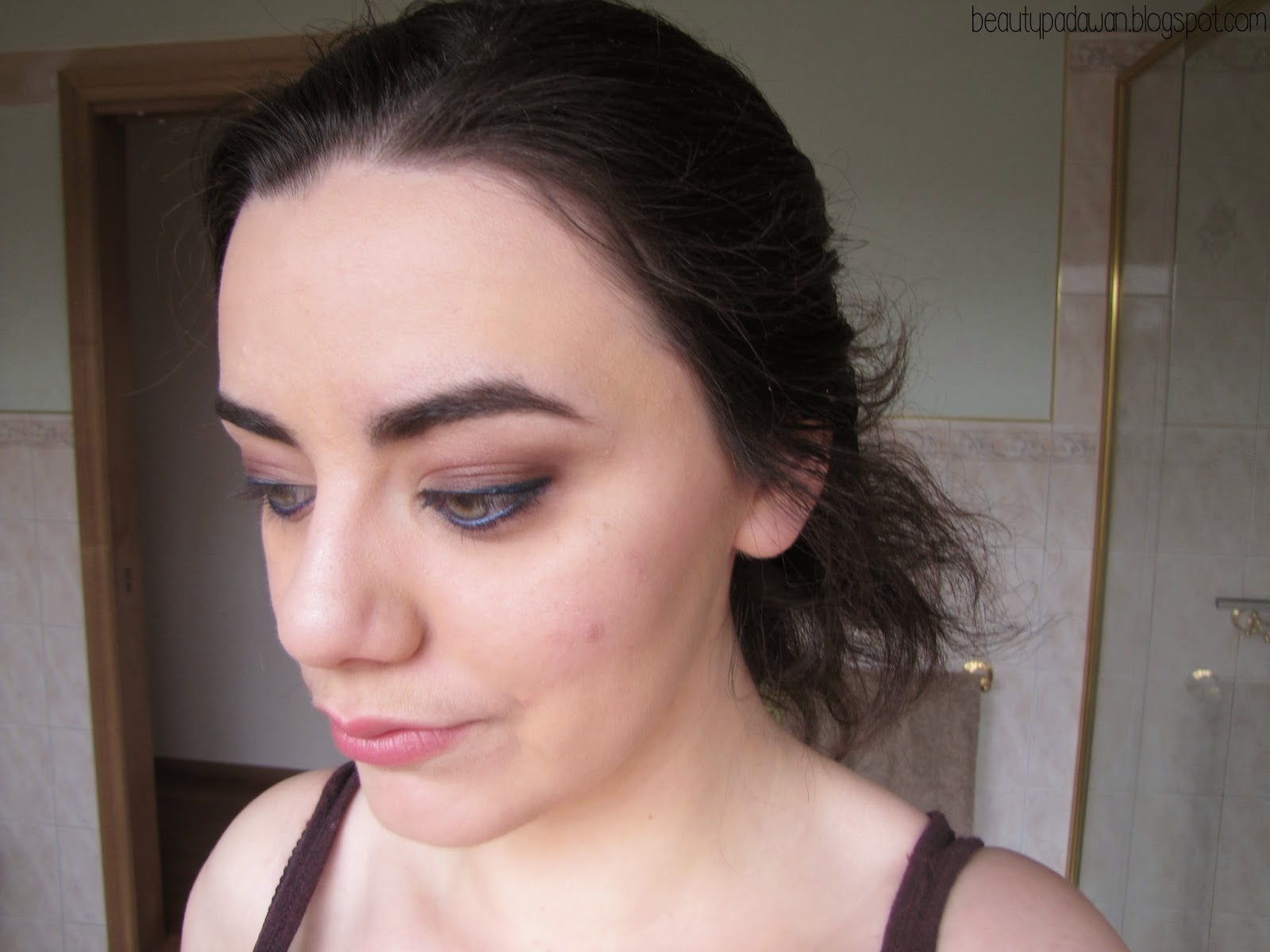 Then for final touches. 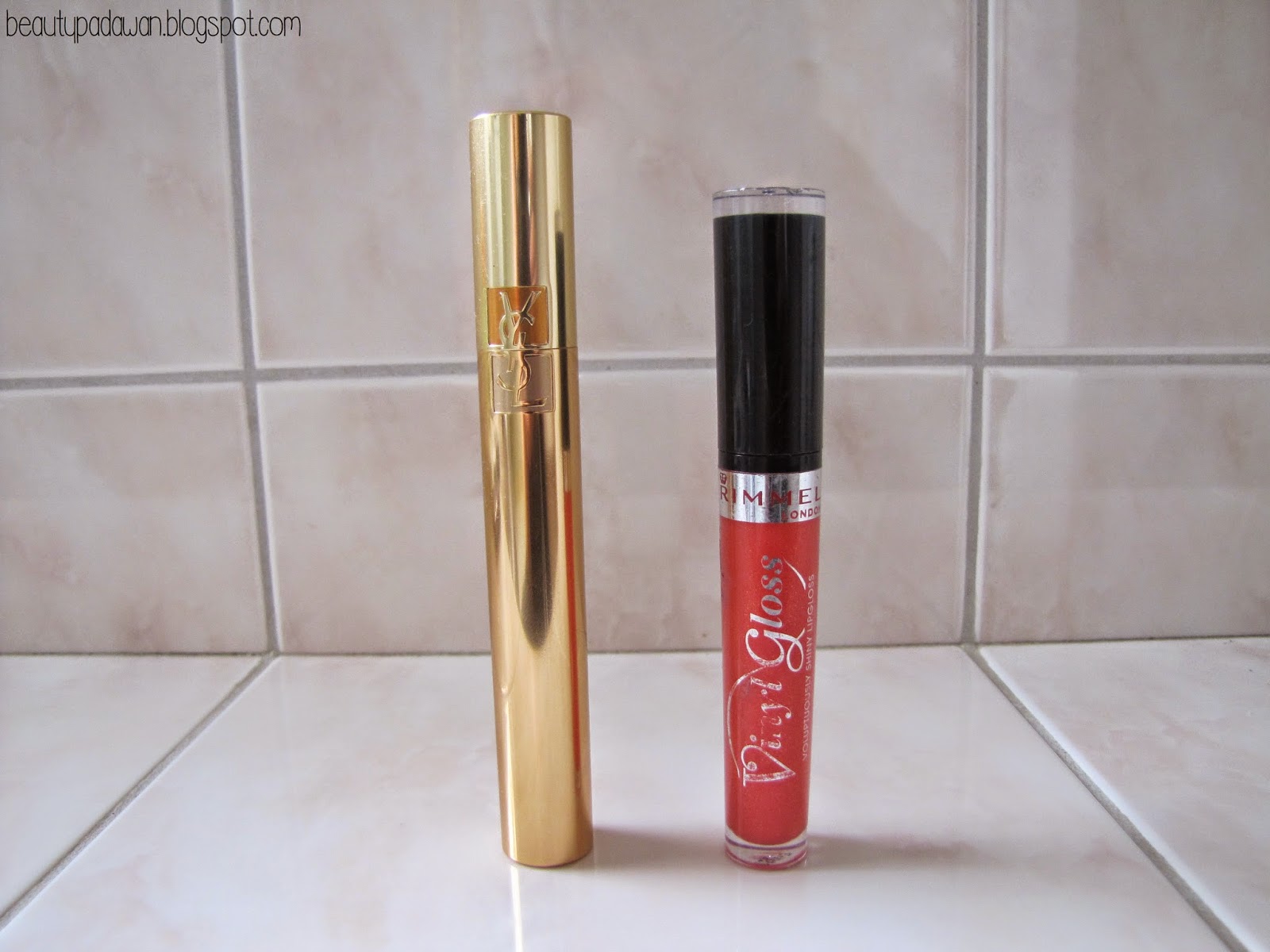 Originally I thought that Keira might have a clear gloss over her lips. Then I remembered that I don't actually know what her natural lip colour looks like, because I've never seen any photos of her without makeup on. Taking this into consideration, I opted for Rimmel Vinyl Gloss -- the peachy pink one without a name on it, because I've owned it for as long as dinosaurs have been extinct.

It was answered with Yves Saint Laurent. (#byemoney) 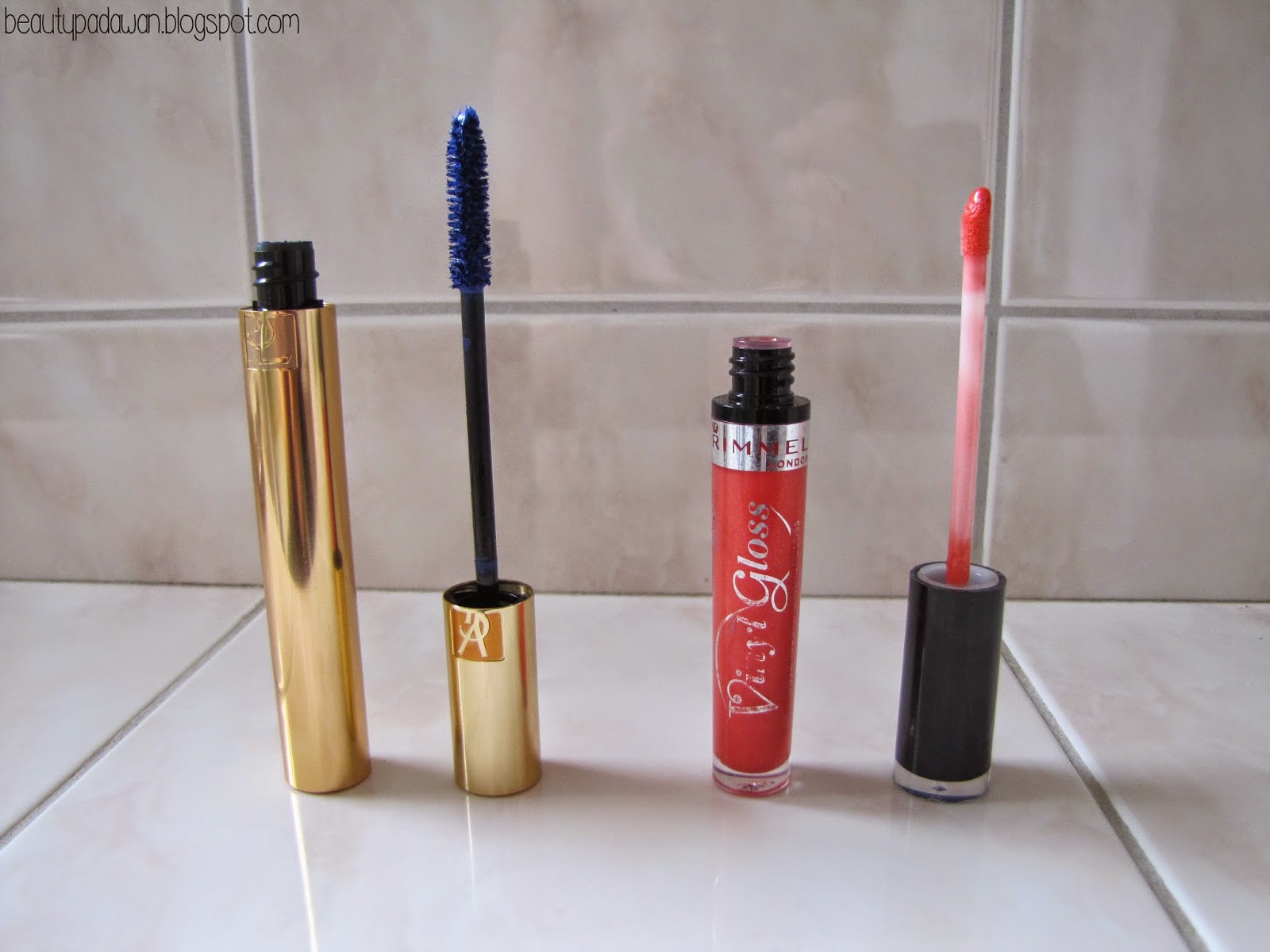 I used the Mascara Volume Effet Faux Cils in "03 Blue". It does look extremely blue on the brush, but I wasn't concerned about the colour being too strong because my lashes are quite dark -- it may show up better on blonde or red-haired beauties.

This was the finished look! Perhaps it's not quite exact as Keira's, but I think it's really nice for both a day trip or a formal event. 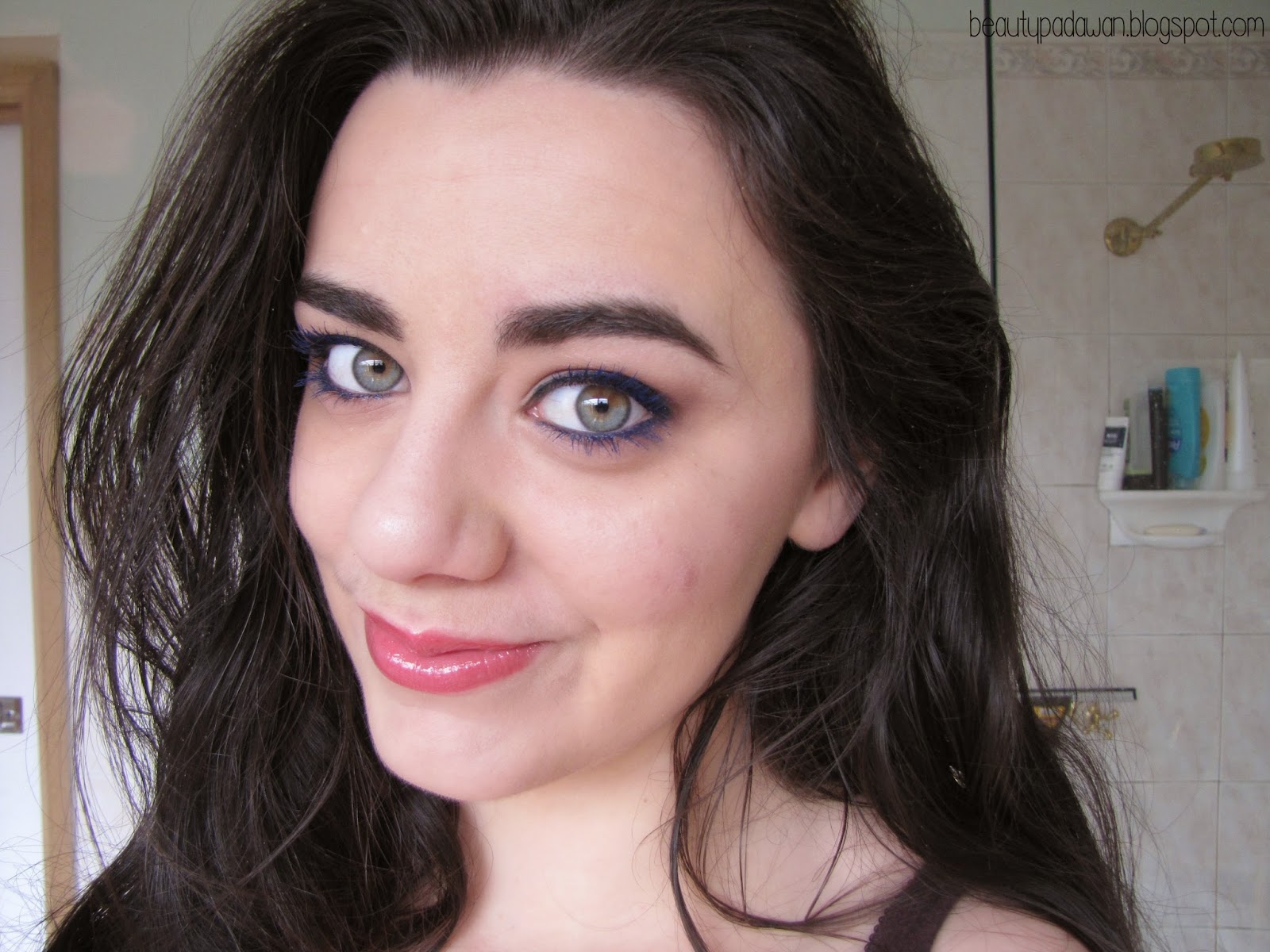 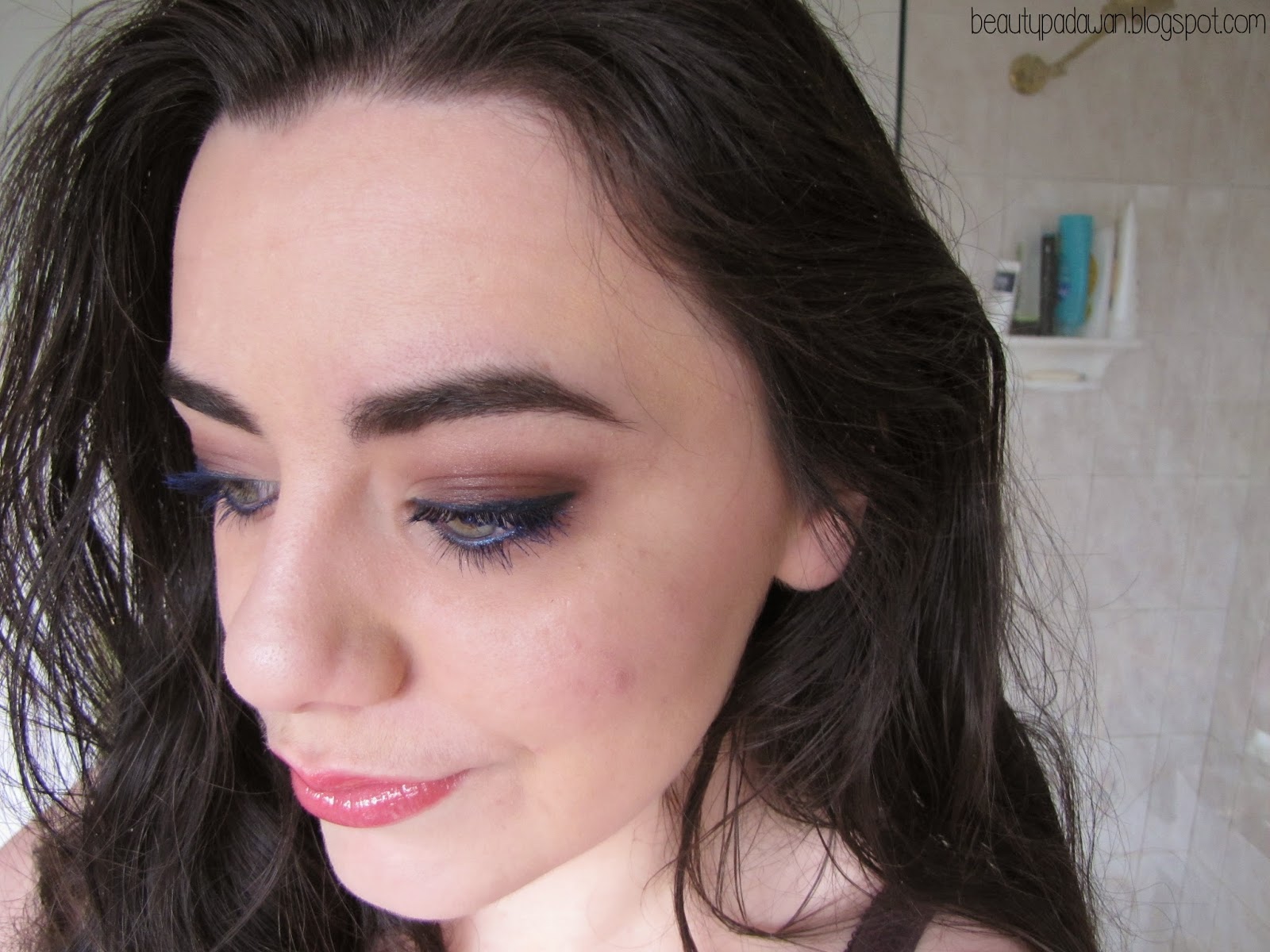 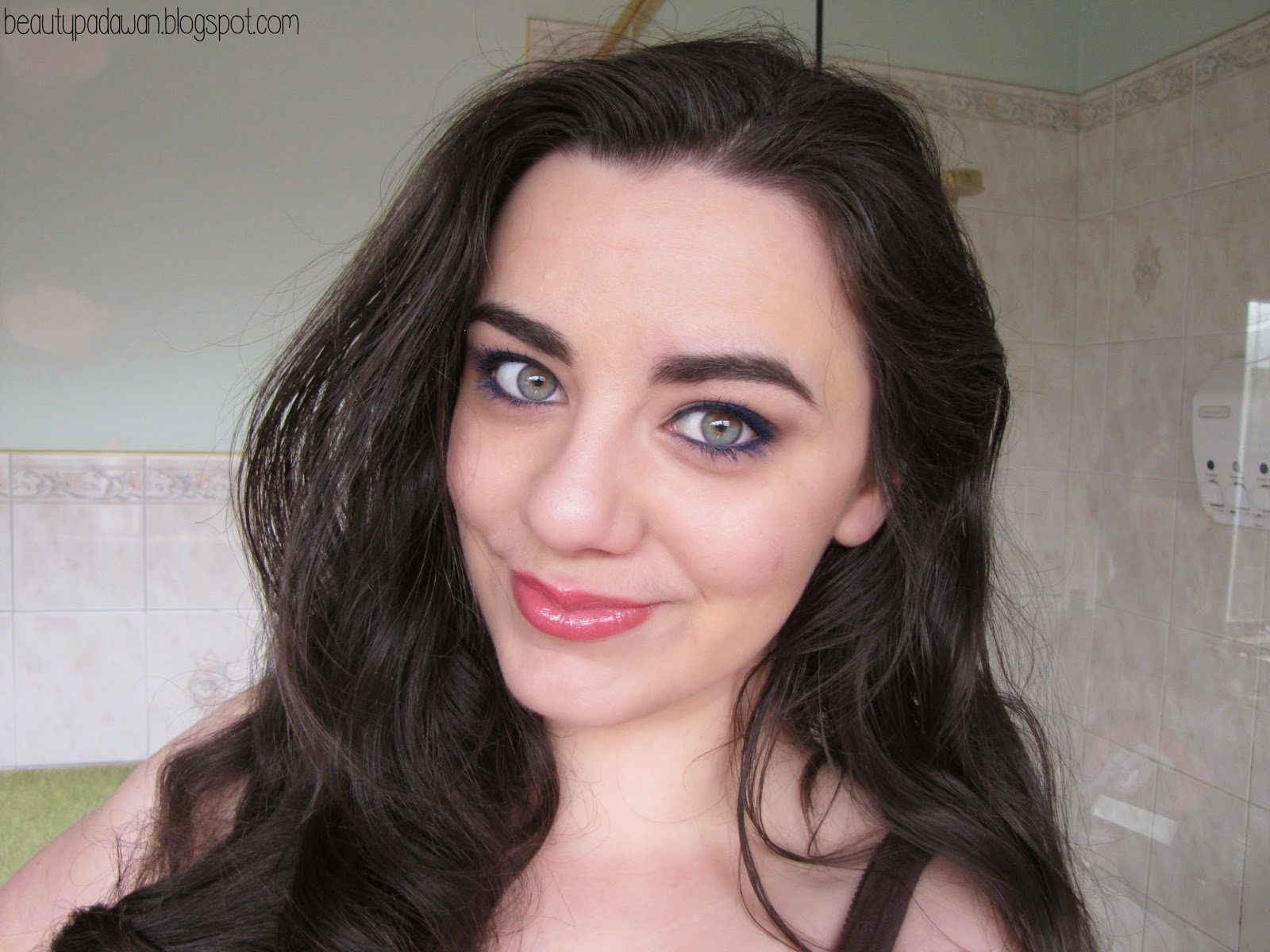 Not into blue mascara? Don't want to splash so much cash around? The look works great with regular mascara as well -- you can see in the picture below, taken when I first tried the look, that I used L'Oreal Paris Butterfly Wings Mascara and it worked a treat!

What do you think of this look? Are you willing to splash on a coloured mascara? Heck, would you buy one at all?

PS. Myer currently has the Benefit Perk Up Artist concealer palette on sale for $24! It's normal retail price is $49, so I would definitely go and pick one up if it's caught your eye!
Posted by Shae Barry at 17:34