The second challenge set by Amy is to...

Day 2: Review a product, service or a brand.

So, to kick it off, I'm going to give a review of Rimmel's Wonder'full Mascara -- and it's relatively long overdue. 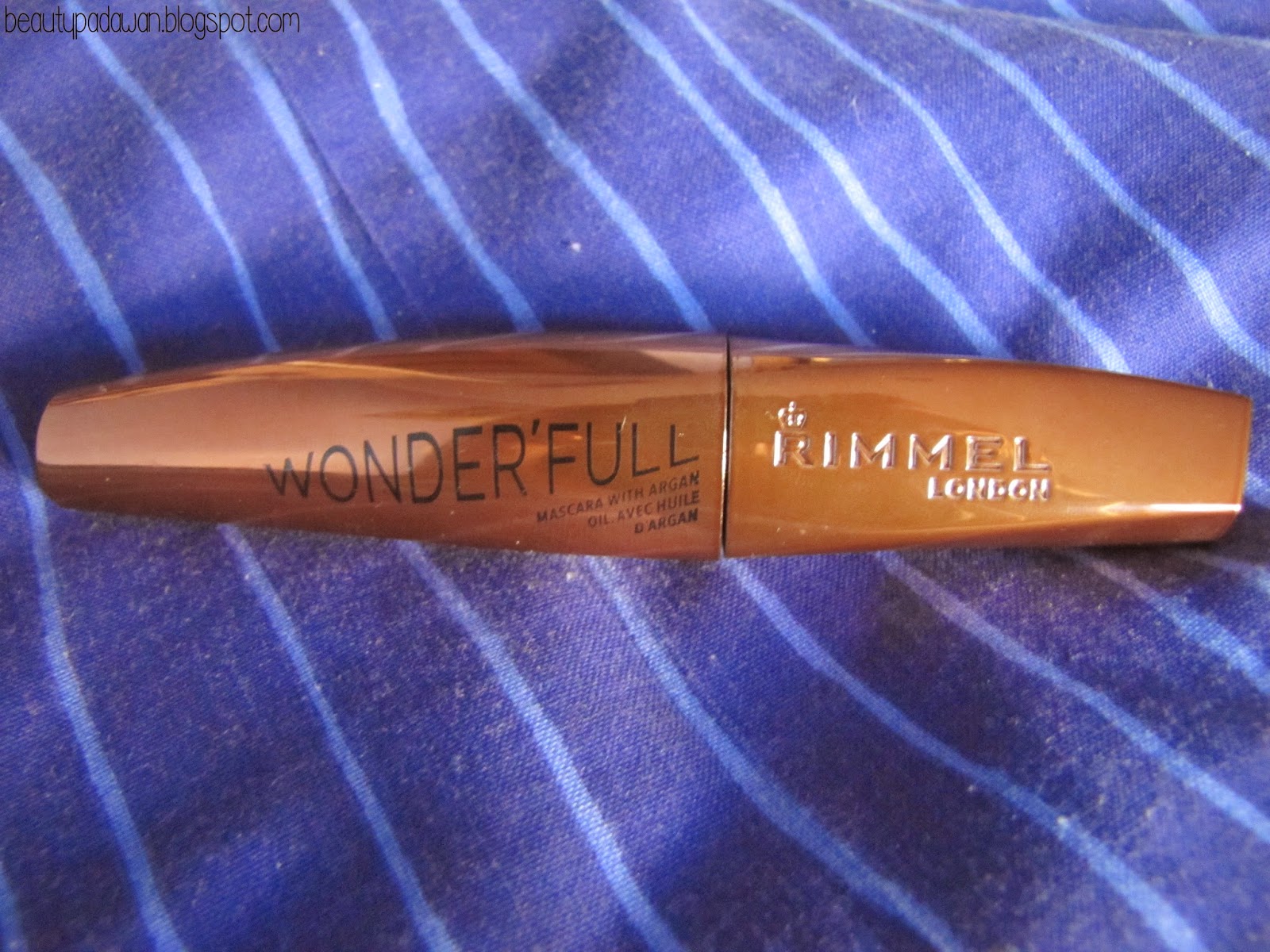 For a long time, I never thought anything would be able to beat L'Oreal's Butterfly Wings mascara when it came to Hulk-smashing volume and length -- until I met Too Faced's Better Than Sex mascara. I've had a dalliance of affairs with the two, and then Rimmel London threw in another player...

The Rimmel Wonder'full mascara is the first drugstore mascara that's impressed me on the first use. It was released in the UK and US relatively recently, and it came out in Australia not long ago either. I got mine on sale for about $12.50 from Woolworths about a month ago or so, but they're currently on sale for about $9! (Which is half price, so WOO!) 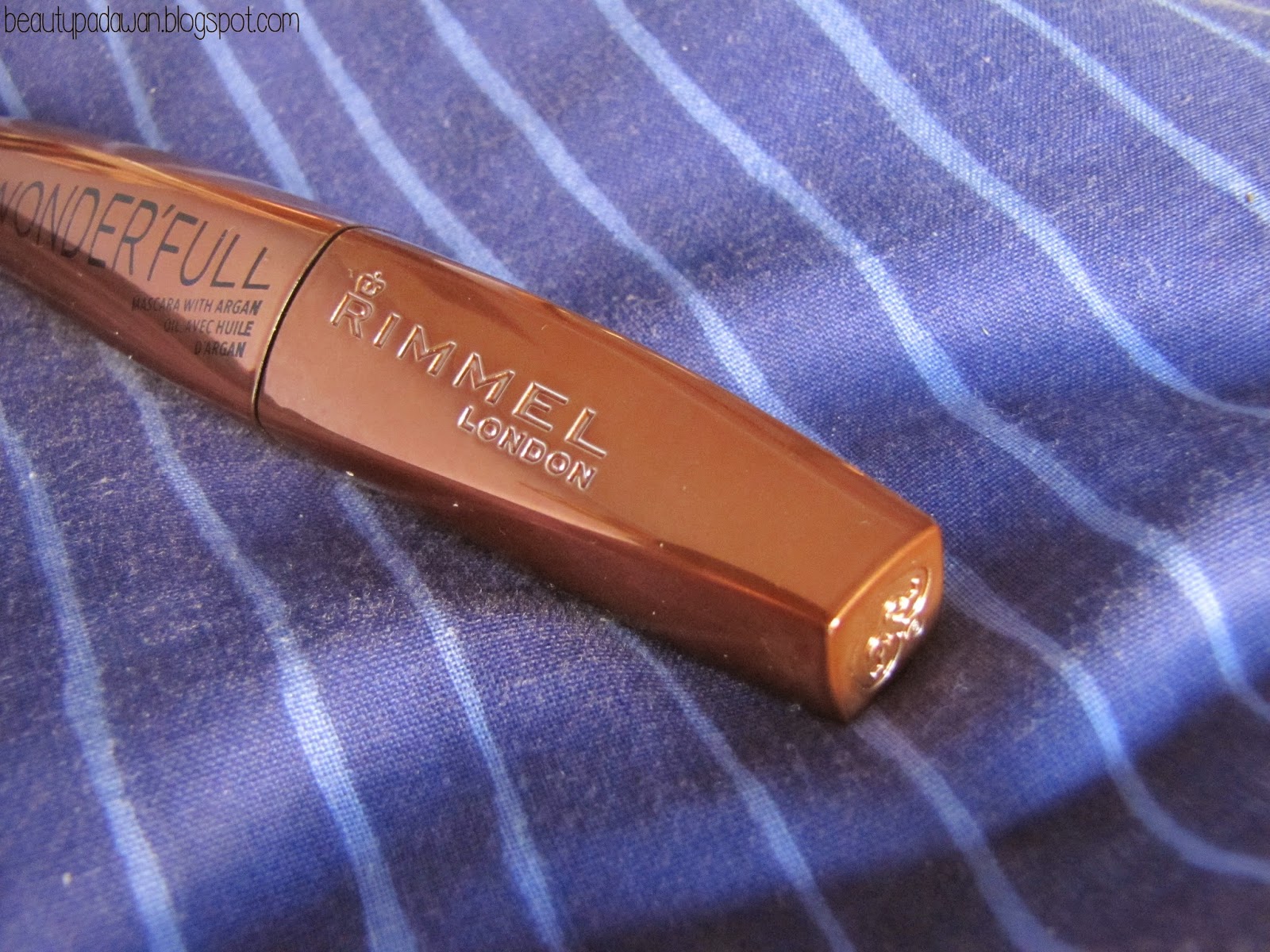 The big selling-point with this mascara is the fact that it contains Argan oil. That itself is not a new product, but the hair and beauty world seems to be obsessed with it -- and this is, to my knowledge, the first drugstore mascara to contain it. So what exactly is it supposed to do?

First of all, let me say that Argan is not to be confused with argon. One is an oil derived from a tree, used mostly to condition and soften hair; the other is a colourless, odourless gas, produced from the radioactive decay of an isotope of potassium. If your mascara contains argon oil instead of Argan oil, I suggest you send it away for scientific analysis then go out and buy a new mascara. 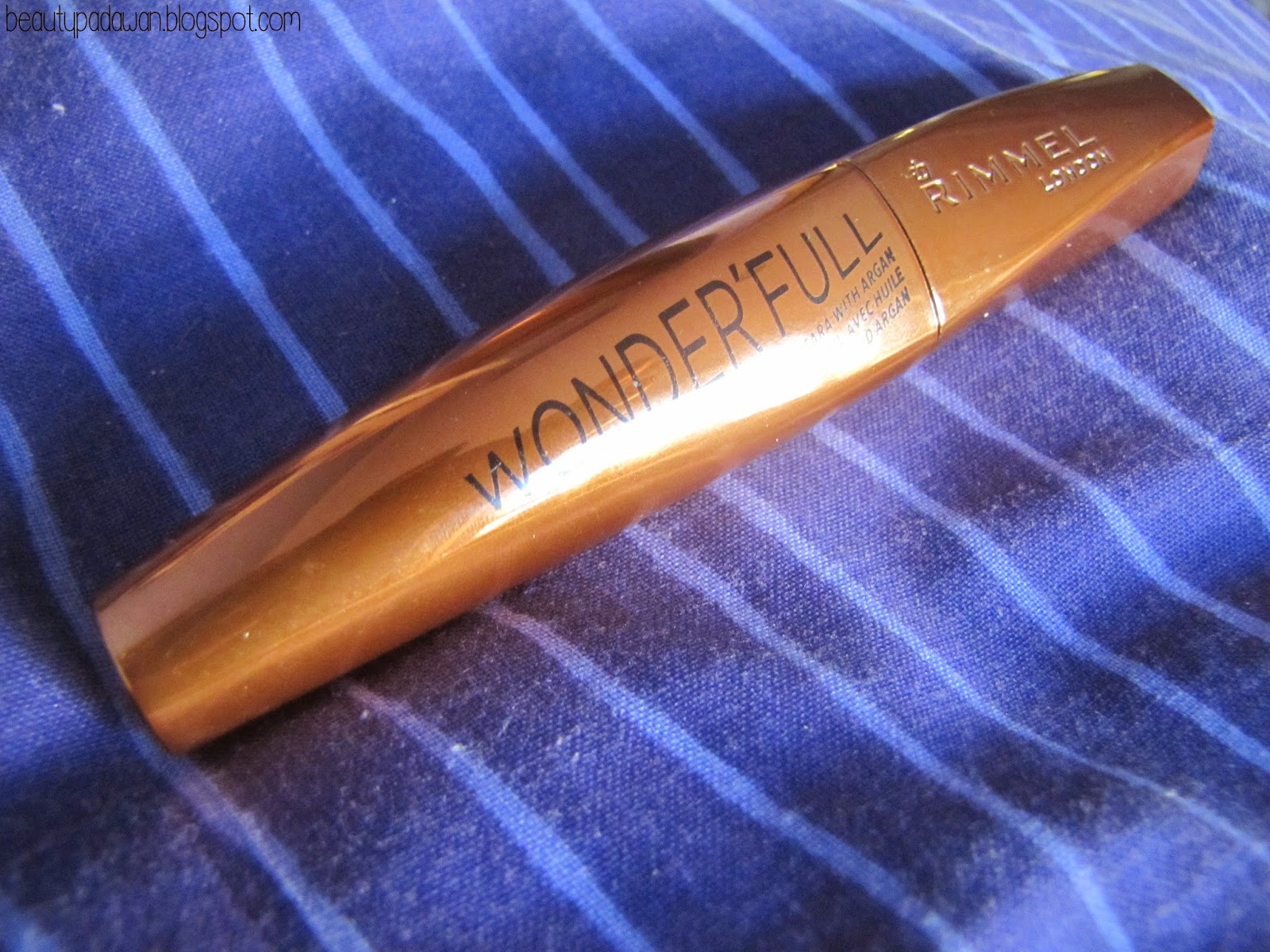 I'm very impressed by the amount of volume that the formula of the mascara gives. The wands itself appears to be relatively cylindrical, with evenly dispersed rows of bristles. I like to use at least two coats to get the amount of volume that I need, although I'm not sure that it will do much in terms of length for those with naturally short lashes. It doesn't flake or feel heavy on my eyes -- which can sometimes happen with the Better Than Sex mascara -- and I also find that I don't usually get it all over my eyelids, which is a relief. Lord knows that it's not a normal day in makeup for me if I don't get mascara on my eyelids.

To be honest, I'm not quite sure how well the Argan oil works. I'm nowhere near an aficionado when it comes to hair, so it would be worth gathering opinions from those who are, but I don't think there is any great benefit to my lashes. When the mascara is applied, the lashes are relatively soft when you consider that you're coating them in magic black stuff -- I've definitely used mascara that makes my eyelashes stiff -- but I haven't noticed any real difference when I've taken the mascara off. If, however, what I've said about relative softness is the effect of the Argan oil, then by all means, it does an alright job. 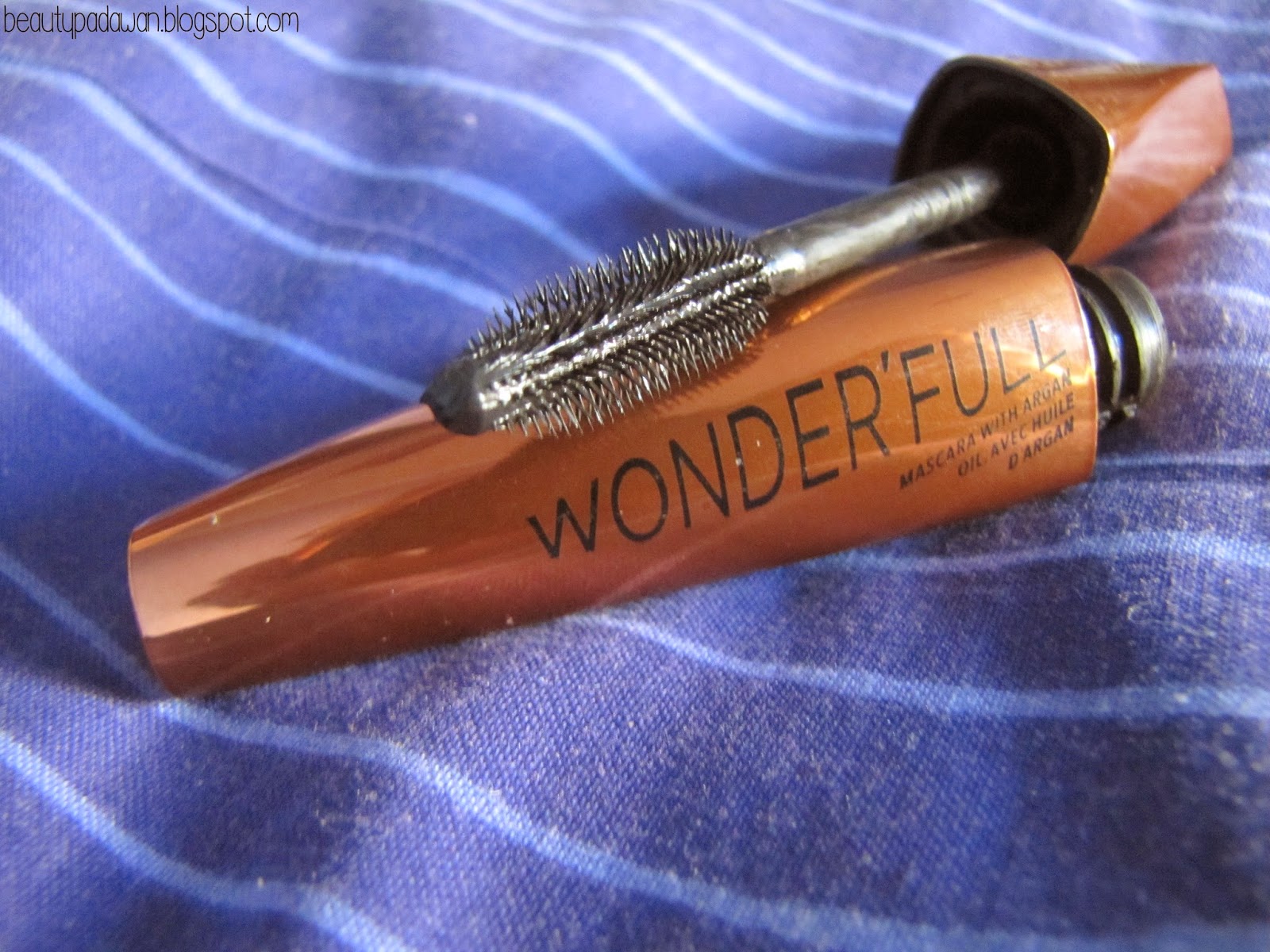 I have also noticed that occasionally the applicator feels a little scratchy when I pull it against my lashes. I do not think that this is a fault of the product, nor that it is caused by the product -- the L'Oreal  Butterfly Wings mascara has done this to me on occasion too, and I think that it's because I probably haven't gotten all of the mascara off the night before -- which basically means I'm trying to apply fresh mascara over remains of dried mascara. Despite this, my lashes don't clump, so it gets a tick from me for that! 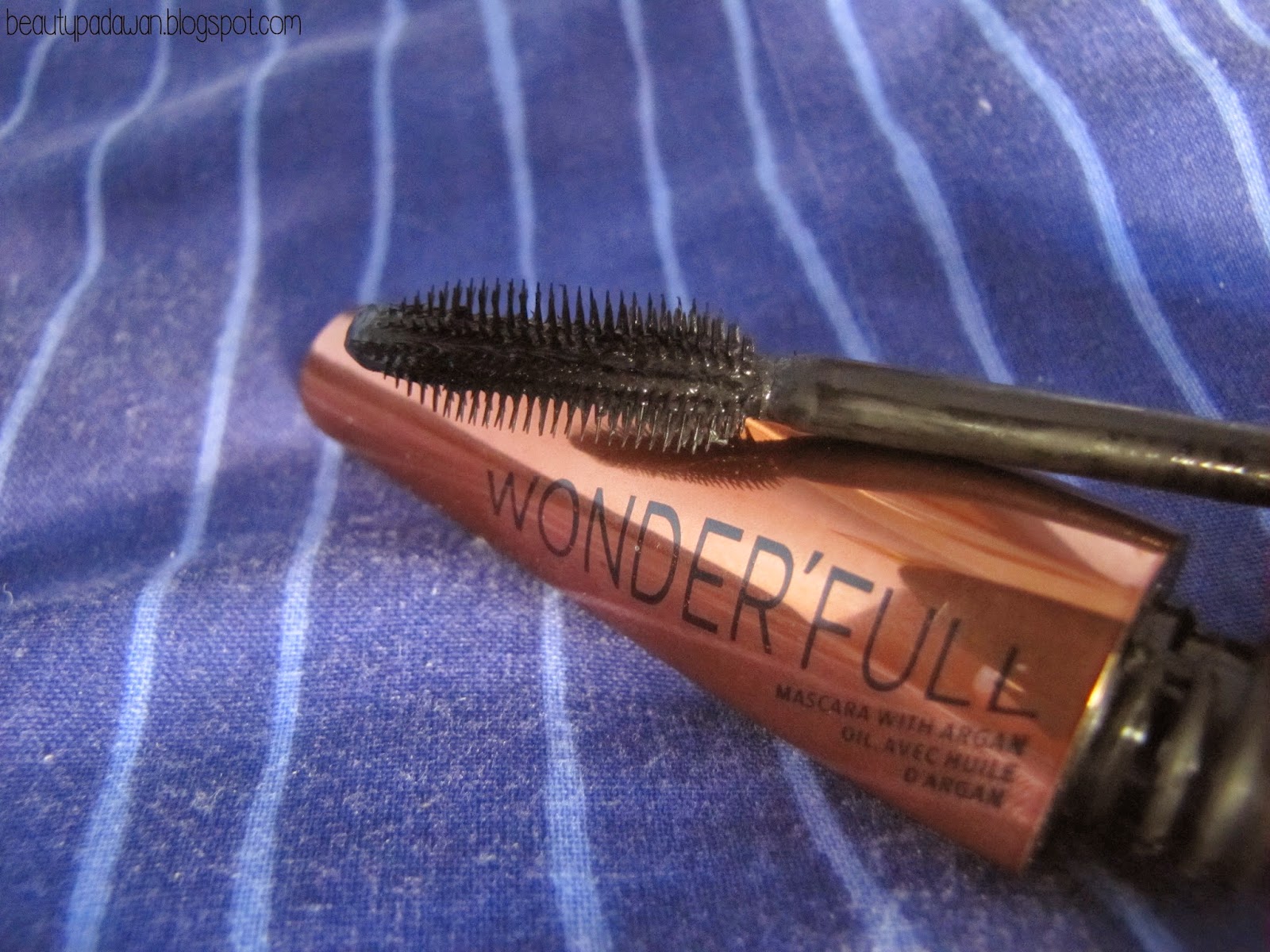 Overall, I say that this is a solid mascara that is definitely worth a place in your collection. If you're looking for a mascara that gives your eyelashes a bit of oomph, but would rather save your dollars then spend them on Too Faced or L'Oreal Paris mascaras (and, perhaps surprisingly, the two are closer in price than you may think), then the Rimmel London Wonder'full Mascara is what you want.

Have you used this mascara before? What are your thoughts on Argan oil?