You're It! The Disney Tag

Ahh Disney. It's a rite of passage as a child to sit through all of the Disney films, old and new, and to have a kindred favourite character, one that just clicks with you and enchants you as soon as you see them. It's an art that's quickly becoming lost -- my cousin, who is 16, made the shocking confession about a year ago that she'd never seen Cinderella. She knew all about it, of course, but she realised suddenly one day that she'd never watched it. Let me tell you, that was rectified quickly.

I have to confess that I haven't seen all of the Disney films either, and many of them I haven't seen in a while. I've never seen Brave -- it hasn't really interested me, to be honest, although I'm sure I'll get around to it eventually. So, to ensure fairness amongst all my answers, you won't be seeing anything from Brave here. 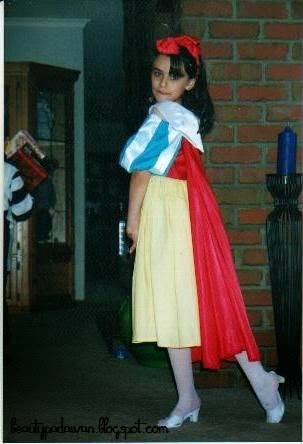 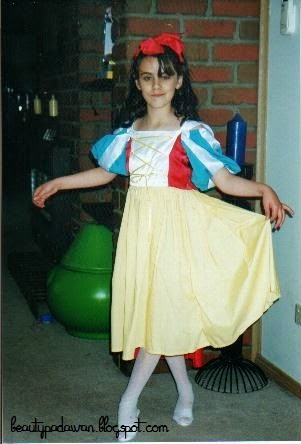 Just when you thought that picture quality couldn't get worse... I give you old scanned photographs of me!

I saw this tag done by Celine on Celine Avenue, and I thought, "Well heck yes, I must do this." Additionally, as this is a Disney tag, not specifically a Disney Princess tag, I might include answers from films that don't have recognised princesses -- or any princesses at all. They're still amazing films that everyone should watch, so why should they be disincluded?

Snow White, and I have no idea why. I used to watch it all the time when I was a little girl, quite literally. I'd worked out along the way that after the video finished, if I waited long enough, the VHS player would stop on its own, rewind itself, and start playing the video again. Thus, Snow White and the Seven Dwarfs was on a constant loop for me.

If we're talking male leads, I'm going with Flynn Rider from Tangled. He was the funniest of the lot for me, and not half as stupid or ridiculous as the other princes. If we're talking proper princes, then Prince Phillip from Sleeping Beauty. "Now, father, you're living in the past. This is the 14th century!"

Anna and Kristoff from Frozen. Can anyone else do cute as much as those two can?

It's either Prince Charming from Cinderella or Prince Eric from The Little Mermaid. Perhaps that grumpy old sour puss from Beauty and the Beast. I don't know, I don't really give a whole lot of thought to the princes. Perhaps I need to have a Disney marathon!

Cinderella and Prince Charming. They're not a problematic couple for me, they're really just my least favourite.

Princess Aurora's dress is absolutely gorgeous. Also, Yzma from The Emperor's New Groove -- have you seen that funky getup?

9. A princess who inspires you.

It was always Snow White for me, although I have no idea why -- she didn't exactly make the best choices, did she? -- but that hasn't stopped me from adoring her, and trying to be as kind (although not as naïve) as she is.

10. Worst decision made by a princess.

It breaks my heart to admit it, but... Snow White, bloody hell! The dwarves freaking told you to not open the door if any strangers came a-knocking! So what do you do? Oooh, let's have a friendly chat to the creepy old crone that knows your name! The ever-friendly birds, who've led you to safety in the past, attack her? Oohhh, let's invite the old bitch witch into the house, give her a glass of water! Why not take the freakin' apple from her, then?! Like, no, I don't care if you're 14 and living in medieval Europe somewhere, if the dwarves tell you not to talk to stranger or let them in the house, don't talk to freaking strangers and don't let them in the bloody house!

11. A villain you feel was justified in their treatment of the princess/prince.

Cruella de Vil, those stupid yappy puppies are -- no, I'm joking, I swear. But Yzma, yeesh! Now that's a different story. Kuzco was a spoilt little brat, he deserved to be turned into a llama -- even if she did mean to, y'know, kill him.

12. A princess you would like to trade places with.

Can I have two options? Okay, sweet.


13. A princess whose life you would hate to have.

Perhaps Mulan's or Pocahontas'. I don't have any of the physical strength or courage that either of those ladies have, I don't think I'd deal well being put in their situation. After them, Snow White. For all her generic idiocy, she was treated very badly by her stepmother.


14. A princess you think is a bad role model for young girls.

I know I said that I wouldn't mention Brave, but didn't the princess in that film run away from her mother and make a deal with a witch so that she didn't have to get married? I know that Snow White gets a lot of rubbish because of her life choices (but I didn't make the best choices at 14 either -- I had a seriously bad haircut at one time), but at least she didn't go and actively make a deal with a witch. Cue disgruntled noise.

I really like Belle's tiara, and Jasmine's after that.

16. Favourite song sung by a princess (can include duets).

"Whistle While You Work" from Snow White and Seven Dwarfs. The song isn't exactly special or groundbreaking, but I've always enjoyed humming it to myself. After that, "Once Upon a Dream" from Sleeping Beauty.

17. Least favourite song sung by a princess (can include duets).

I've never been too huge on any of the songs in Cinderella.

18. The princess with whom you would be best friends.

I'm not too sure, really. Maybe Rapunzel from Tangled or Anna from Frozen. They've got more generally modern attitudes than the other princesses I can think of, in that they're not all perfection and cupcakes. I'm not saying I wouldn't get along with the others, I just think I might get on with those two best.


19. The princess with whom you would be frenemies.

Perhaps Mulan or Pocahontas -- perhaps even Cinderella. Maybe not any of them, but those three could be the ones I'm most likely to make a dig at.

20. The princess you would openly hate and be enemies with.

I don't know I could hate of the princesses -- but then, I haven't met them!

21. The princess you would dress as for a Halloween/costume party.

We don't really do Halloween in Australia, but I have dressed up as Snow White on two occasions -- once when I was 7, for my own dress-up birthday party, and one when I was about 10 or 11 (I think -- the above pictures of me are from then), for a friend's birthday -- which ended up being much less dress-up than she'd said it would be (ugh). Today I think I'd only really be able to pull off Belle.

22. List three admirable qualities about the princess you named on question #4.

Ughhh. Okay, here we go.
And those are the only nice things I can think about Cinderella for now.

23. A princess you feel didn't deserve her happy ending.

24. The happy ending you feel didn't make sense or was too easy.

Cinderella's has always stuck me a little -- not that it's too easy, as I don't have a problem with how any of the stories ended -- but I think that, logically, it's missing a gap. Think about it. She's wearing glass slippers that are a perfect fit for her foot, and yet one of them manages to fall off.
I think I'm starting to overthink things.

I shall explain with a quote:

"Pull the lever, Kronk. WRONG LEVERRRRR! Why do we even HAVE that lever?"

I don't know if I can pick one, to be honest. Maybe, if I really had to choose, it'd be The Emperor's New Groove. I just think it's a lot of fun!

I could talk about Disney princesses like Aurora, Ariel or Jasmine -- and they all have incredible voices in my opinion -- but for me it's going to have to have to be Elsa. There's something about Idina Menzel's voice that send a small shiver down my spine. Perhaps she's hypnotised me into liking her with her singing. Is it possible to do that?

28. Edge of your seat: the moment you find most exciting.

The end of Snow White! Okay, so it's not all dragons like Sleeping Beauty, or a calm and dignified "eff you" like in Cinderella, but when I was little I was always hanging on the edge of my seat when Snow White was on, urging the animals to convince the dwarves to get back to Snow White in time! Finally Sleepy, of all people, got the message and the dwarves were all over that shiz like a fly, and I can remember being so excited that I just couldn't contain it. Then, y'know, they're climbing up the mountain and the Evil Queen is trying to crush them with a boulder (that line "I'll crush your bones!" always gave me chills) but the lightning hits and she falls, presumably to her death given by the descent of two ugly-looking vultures.

29. If you were a Disney princess, what would your story be?

Oh God, who knows? I think it'd be as ordinary as Disney princess stories go. I'd probably have more books and sarcasm than the other princesses -- I might be more aloof than the other princesses -- but then so would most other girls. I just know one thing: my dress and tiara would be bad ass! In fact, my dress would probably be yellow, because I look awesome in yellow. -- Hang on, am I turning into Belle...?

30. What do you want to see from the next Disney princess?

I honestly couldn't say. Perhaps a plus-sized princess. Perhaps an anti-hero princess. Perhaps a princess that starts out as your typical Snow White-type princess but then turns into a sly, cunning madwoman. Perhaps a full-on villain -- now that could be fun. I hold about as much authority on the subject of what a Disney princess out to be as I do on building a rocketship -- so I'll leave the decisions in the hands of the people who know best!

If you've ever wanted to dress up as a Disney character, then I tag you to complete these questions!

Email ThisBlogThis!Share to TwitterShare to FacebookShare to Pinterest
Labels: Celine Avenue, You're It!