Phwoar, that's a long title! While I love some of the creative, over-the-top names that companies come up with, I sometimes wonder if I won't be told by Blogger that my title is too long!

I've noticed a few times that Max Factor and CoverGirl often appear to have very similar products -- a double-ended mascara could be coincidence if there's the right market, but both brands also sport very similar eye shadow products. I've often wondered if Max Factor and CoverGirl are owned by the same parent company -- perhaps they are and it's blindingly obvious, and I just haven't gotten around to realising -- with the first, most notable difference being in price. How do they compare in a road test? That's what I endeavoured to find out. 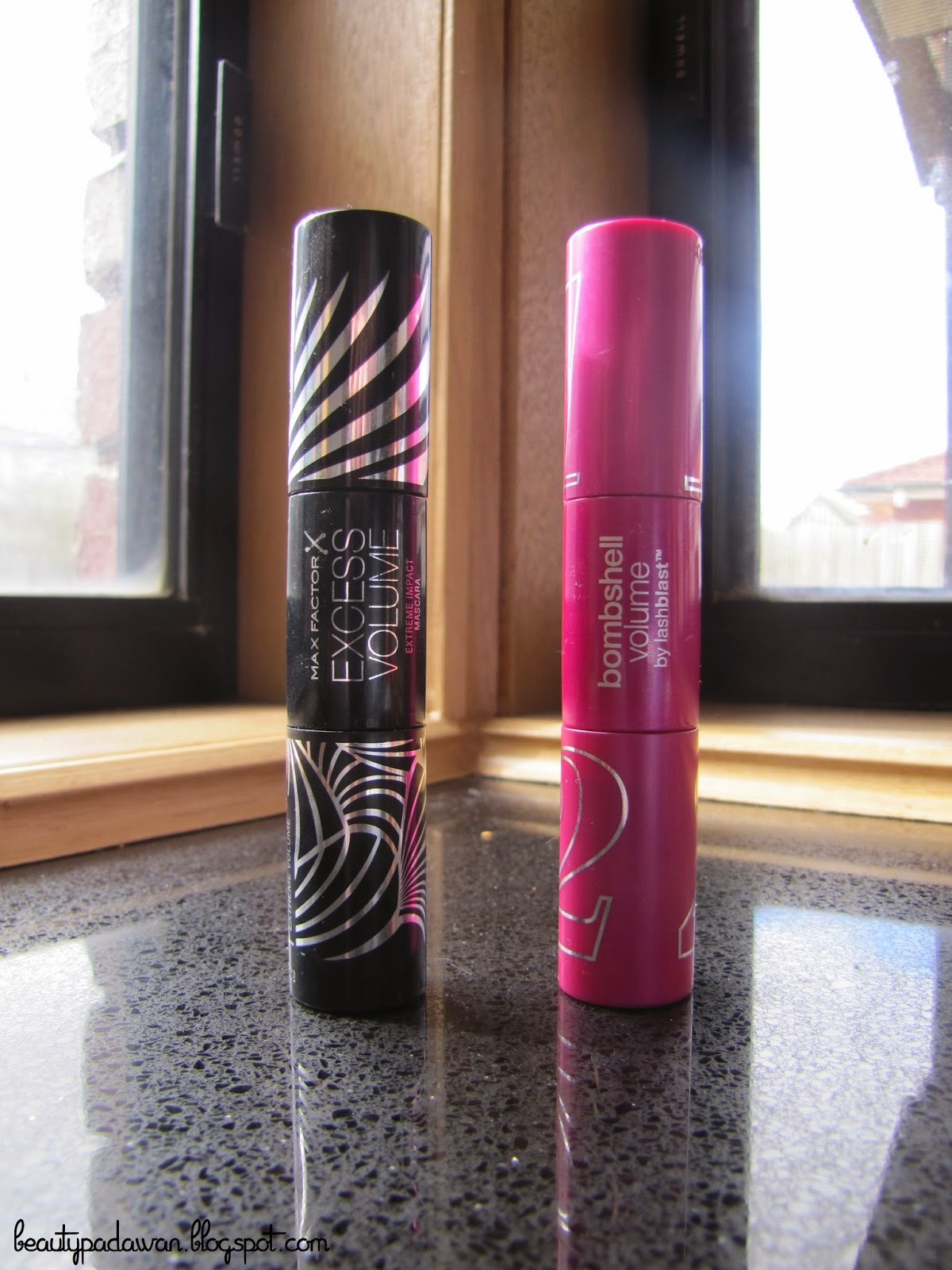 In terms of looks, the two are identical in form. Both are a wide and cylindrical in stature, with two caps on either end. The Max Factor mascara is black in colour, whilst the CoverGirl mascara is hot pink.


The first wand end of the CoverGirl mascara does have a slight "make-up" scent, but it's not noticeable when you apply it. Apart from that, none of the other wands have a detectable scent.


Both mascaras have 20mL of product and the Max Factor variety is the dearer of the two, at $25.95; the CoverGirl mascara is $21.95. In my limited beauty shopping experience, CoverGirl often tends to be on sale more often than Max Factor, so you may be able to purchase the Bombshell mascara cheaper again. I got mine for $10 from Woolworths a few weeks ago, which was a cracking sale.


As I figured that both products might very well end up doing the exact same thing, I decided to take the plunge and wear one type on each eye! If there ended up being a noticeable difference, my plan was to take one of them off and just use the same product -- after all, I didn't want one eye to look lush and full, while the other looked as though it was going to create a Daddy Long Legs spider!
﻿﻿﻿﻿

The dual applicators on both products looked identical. The first, which I think is supposed to be your generic mascara, is the kind of wand that I've seen on the CoverGirl LashBlast Volume mascara -- the first I ever bought and one that's dear to my heart. It's fat at the bottom, generally conical in shape and the spikes range from standard length at the end to teeny-tiny at the top.
﻿﻿﻿

The second applicator is wiry -- not my favourite kind, as it can scratch unpleasantly against your eyelid if you bring it too close, but it's used to apply to "dark lacquer" that's supposed to make the mascara... darker, I guess.

If you can get darker than black.

While neither mascara give the full-on intensity of a high-end mascara such as Better Than Sex by Too Faced (although I loathe to call Max Factor "drugstore" with a price tag like the one it has), they do give some nice volume -- but not an astounding amount of length. It could be my Padawan nature, but I couldn't notice any difference in result. I felt that I needed two coats from the first CoverGirl mascara wand, where I only needed one from the Max Factor mascara, but it ultimately looked the same to me.


In terms of performance, I think that it's an equal tie; however, I will go with CoverGirl's Bombshell Volume by Lashblast -- though it's purely on the price alone. If you're the kind of girl or guy who prefers one brand over the other, you can buy that with the peace of mind that you're not missing out on a superior product. Of course, a mascara connoisseur might pick up on differences that I can't, but these are the results of my own observations!

Have you got either of these mascara? Is there one you prefer?