Hello there, readers of the internet!

In my extra special second post of the day, I bring you... an evening look for the summer! As you'll have read about in my earlier post, this is part of a collaboration with my friend Ms Jess Louise, who has an accompanying fashion video! Inspired by a photo of four dresses, I created a neutral look for the daytime, and this slightly more colourful green look for the evening. 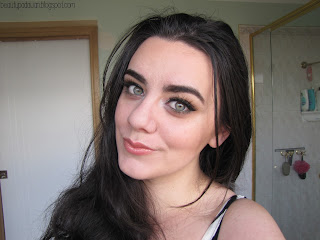 Let me tell you, this was a pain in the ass to figure out.

Inspired by the purple/black dress and the black/green dress shown below (both of which I'm a teensy bit jealous of), I experimented several times with different shadows to give me a full-on smokey look. I played with blacks, blues, purples -- nothing seemed to work out! 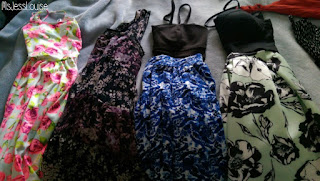 Then, literally two days ago, I had a thought: "Why not go green?" It's a colour of shadow that can be hard to pull off, especially when you have green eyes like Jess and myself, but I really feel that I've made it work. It's not super smokey, it transitions from light to dark -- and, most importantly, it goes with both of the dresses.

Yes, even purple. I stand by purple and green as an acceptable colour combo like Aemon Targaryen stands by Jon Snow. 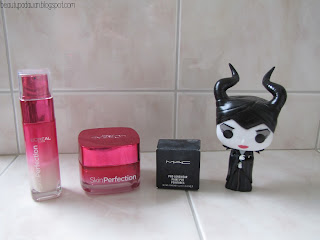 As I'm about as sociable as a cactus, I have no idea what it is that people do at night during the summer if they don't sleep in a vat of ice cream, but I do know that they likely want their face to stay in place. I started with the usual: the L'Oreal Paris Skin Perfection Concentrated Correcting Serum and its accompanying L'Oreal Paris Skin Perfection Correcting Day Moisturiser. After that, I decided to do my eyes first -- the reason for this being that my first lot of failed makeup experiments used shadows with a lot of fallout -- so I primed them with the MAC Pro Longwear Paint Pot in "Soft Ochre". 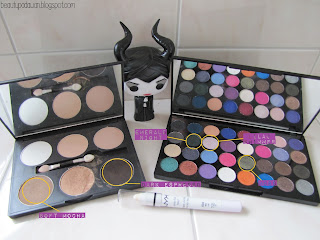 I decided that I wanted to start by defining my crease first. Something that I kept fail-snailing at was taking my eye shadow too high up, so I figured that having some idea of where my transition shade was would help prevent me from doing that. For it, I used the Klara Cosmetics Be nHued Palette and used a blending brush to gently place "Soft Mocha" into the crease. I didn't go too dark, just enough to make sure it was definitely defined. From there, using the NYX Jumbo Eye Pencil in "Milk", I drew on and around my inner corner, before patting on "Lilac Shimmer" from the Makeup Revolution Eyes Like Angels Palette with my finger. You can use a brush if you like, but for me using my finger helped blend and diffuse some of the NYX product as well, which ended up looking a little too stark for me.

With that done, I took a shadow brush and patted the shade "Moss" all over the centre of my eyelid. It's a light shimmery moss shade that will need you to go in a couple of times and pack it on to bring out the colour and the shine. Flipping the brush to the other side, I put "Emerald Night" all over the outer corner of my lid, making sure that I didn't go over the crease colour and making sure that I didn't go nuts with extending it out. Then, using a tiny little shadow brush -- the kind that can only be useful for detailing -- I put "Moss" on the inner and centre section of my lower lashline, and then "Emerald Night" on the outer section, connecting it to the shadow on my lid. 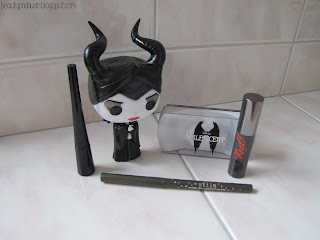 Usually I would reach for my Kat Von D liner, but it gets a little precocious and difficult when I try to use it over Makeup Revolution's gorgeously buttery shadows, so I went for my ever-trusty Maybelline Hyper Glossy Liquid Liner and drew a neat little wing. I didn't want to go too big with it, so I make sure that it did not extend further than the crease colour. I lined my lower waterline with the Stila Smudge Stick Waterproof Eyeliner in "Moray", then used the Benefit They're Real! Mascara on my lashes.

I'm usually not one to bother with lashes, but you've got to have lashes on an evening look, so I decided to go for the most natural ones I had, and used the MAC 36 Lashes (mine is obviously from the Maleficent collection but they're part of the permanent collection -- and I was wearing them, hence why they're not in the packaging). 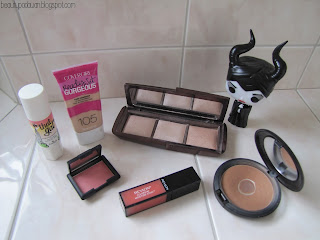 From there, I went onto priming my face, going in with Benefit's That Gal Primer, letting it sink in for a minute; I then chose the CoverGirl Ready Set Gorgeous Foundation in "105" for foundation, because I really like how long it lasts no matter how many high-energy situations you're in. It was at this point that I did my brows, using the shade "Dark Espresso" from the Klara Be nHued palette. After that: contouring. With my MAC Bronzing Powder in "Matte Bronze", I contoured all the usual places: my cheekbones, my temples, and the top of my forehead. I also decided to have a go at contouring under the edge of my jaw, to try and sharpen it up -- that's apparently what you're supposed to do!

Not wanting to go too overboard with colour on the rest of my face, I went for the only natural, peachy blush I have: NARS Blush in "Deep Throat". Highlighting, of course, is a must, so I took the Hourglass Ambient Lighting Palette and used "Incandescent Light" along my cheekbones, the bridge of my nose and my Cupid's bow. I then realised that my face on the whole looked a little too pale -- whether or not it was because it's colder than the Arctic, I'm not sure -- so with a buffing brush, I used "Radiant Light" to bronze up my face further where I'd contoured, before dusting "Dim Light" over my forehead and down the middle of my face.

To finish off the lips, I selected Revlon's ColorStay Moisture Stain in "London Posh" -- it may apply terribly, but once it warms up to your lips, it gives you a really natural, glossy finish that won't demand heaven and earth of your lips.

And then that's the finished look! 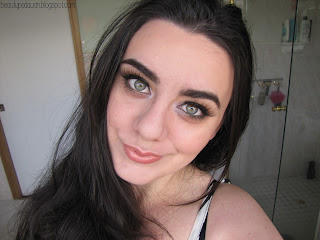 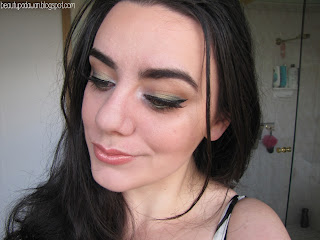 Because the look is meant to be suitable for summer, I put a dress on and snapped some photos outside so that you can get something of a feel about how wearable the look is, rather than taking photos in a hoodie. Despite the sunshine that you can sometimes see, it was absolutely freezing! I can't remember the last time I went outdoors for five minutes and came back chilled to the bone. 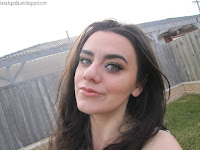 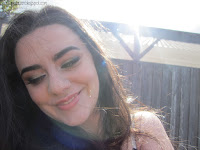 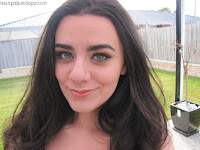 I hope you enjoyed reading about this look as much as I enjoyed pulling it together! Don't forget to watch Jess' video, to see the dresses in action, and let me know which one of them is your favourite.