About 65 million years ago, I started eyeballing the Makeup Revolution site the same way Sméagol eyeballed the Ring -- this is 100% the fault of Jess from Pretty Chit Chat, whose amazing looks with their products caught everyone's eyes. Roughly 20 million years later, my mother said to me, "Hey, I'll buy you some stuff! Here's a budget, see what you can get!" Of course, when I'd mentioned to her that I had my eye on one or two eye shadow palettes, there was no way she could've known that I meant the majority of them. I restrained myself, however, kept myself within the budget -- and my incredibly exciting glut of eye shadow arrived in due time!

Even though I got these about a month ago, it's never too late to do a haul post... right? I'll eventually have individual reviews and swatches for these palettes up as well, so stay tuned for those! 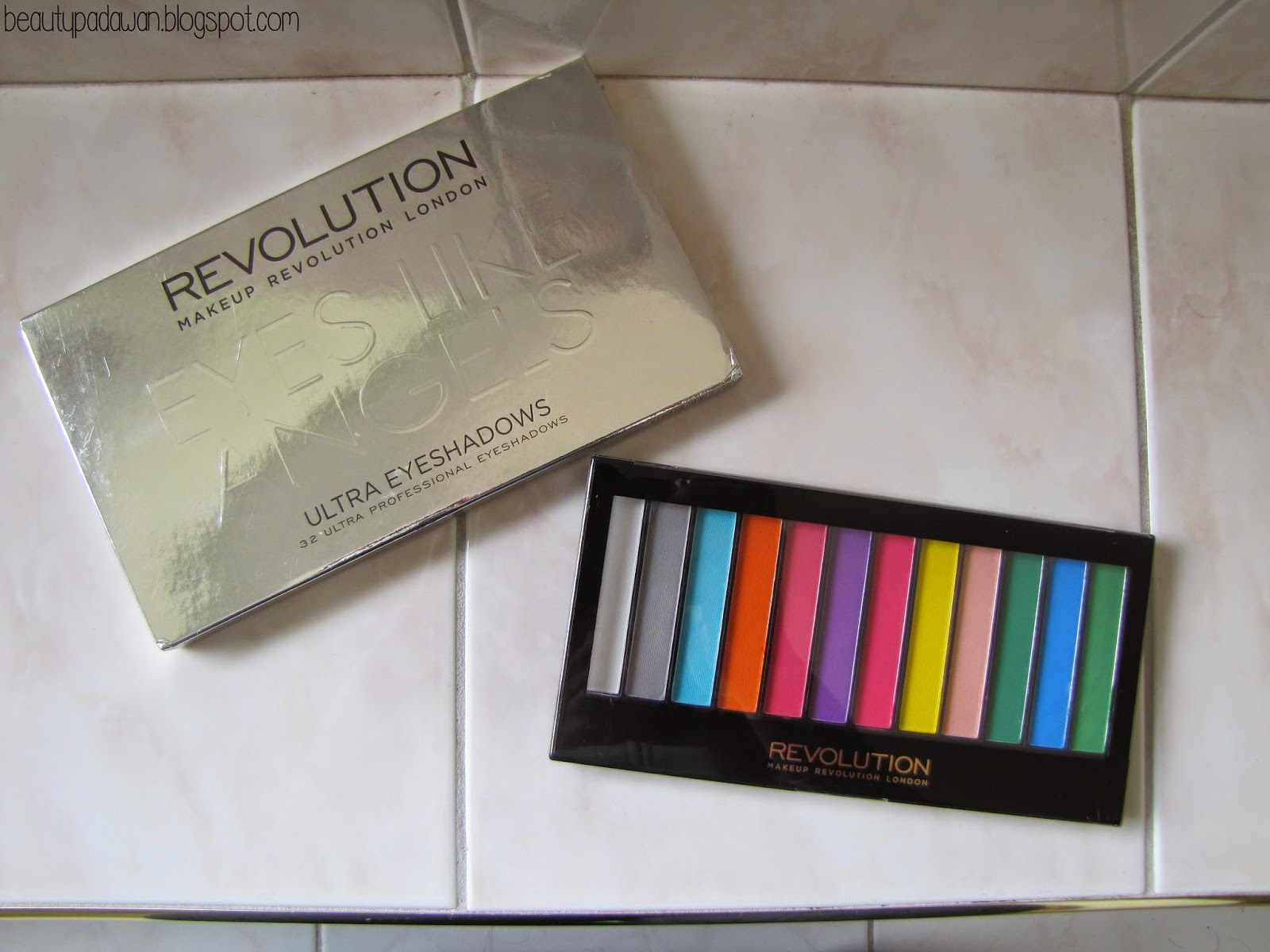 Eyes Like Angels Palette -- $14.47 || This palette has 32 gorgeously colourful shades, ranging from blues to pinks, creams to a magnificent orange. The packaging is made of a sturdy, hard black plastic with an amazing huge mirror and is housed in a shiny silver box. Both the box and the palette were a little difficult to open -- the box isn't necessarily a problem if you don't care for keeping it, but you have to get your fingers underneath the palette clasp if you want to open it: fingernails won't cut it -- in fact, the palette will probably cut your fingernails! For the most part, these eye shadows are metallic and frosty, velvety to the touch. The only downside for me were some of the more matte shades, which could be a touch powdery and didn't swatch quite as well.

Matte Brights Palette -- $7.24 || This palette is a collection of 12 bright matte colours, ranging from white to green. Compared to some of the other matte shadows I've swatched, these were quite nice. As usual, the colours are really bright, which is what tempted me to purchase this palette to begin with. The orange and the yellow in particular were amazing, but the grey and the last green could've been much better. This palette didn't come in any packaging, but the clasp was the easiest to open of the lot. 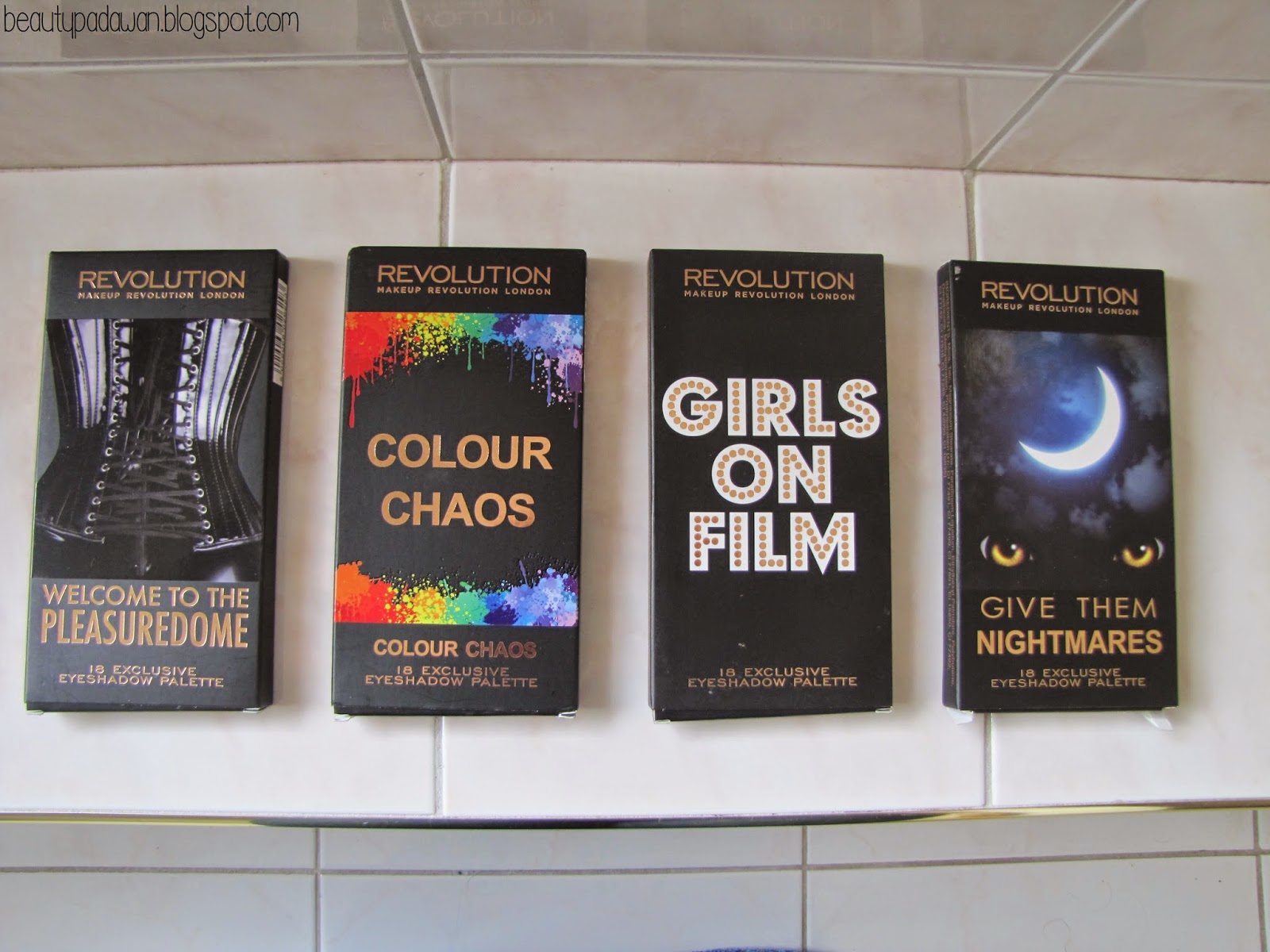 Salvation Palette: Welcome to the Pleasuredome -- $10.86 || It was the blues and greens in this palette that drew me in -- in a crowd of neutrals, they really stand out. The six mattes aren't too bad, they weren't as chalky as some others. The box and the palette itself were very difficult to open, however, and at first I had to commission my brother to do the honours until I worked out the little trick with the fingers.

Salvation Palette: Colour Chaos -- $10.86 || I bought this because, in my mind, it kinda resembled the Urban Decay Electric Palette, but without the roughly $90 price tag that the Electric Palette brings. Now, if you wanted to buy one palette with bright colours, this would be the one to get. The metallic are bold and beautiful, and even the mattes, though not up to par with the metallic formula, amazing to swatch. I, honest to goodness, cannot wait to test-run these shadows.

Salvation Palette: Girls on Film -- $10.86 || This palette is full of absolutely gorgeous neutrals -- with Frenzy All Down Your Spine being my favourite of the lot. The mattes were the best I'd seen in all of the palettes; their formula felt a bit more like that of the metallic. I think you could easily do both day and night looks with this palette, and go from one to the other with ease.

Salvation Palette: Give Them Nightmares -- $10.86 || So this palette... It was this palette that prompted me along to really check out Makeup Revolution in the first place! This super-pigmented palette has some really awesome shades, including hands-down what is the best black shadow I have ever come across. Friday the 13th is supposed to be a shimmer shade, but I can barely detect any shimmer whatsoever -- it's better than the actual matte black shade, Darkness. Although the shades are all really dark, I'd be really interested in trying to come up with an easy, light daytime look. 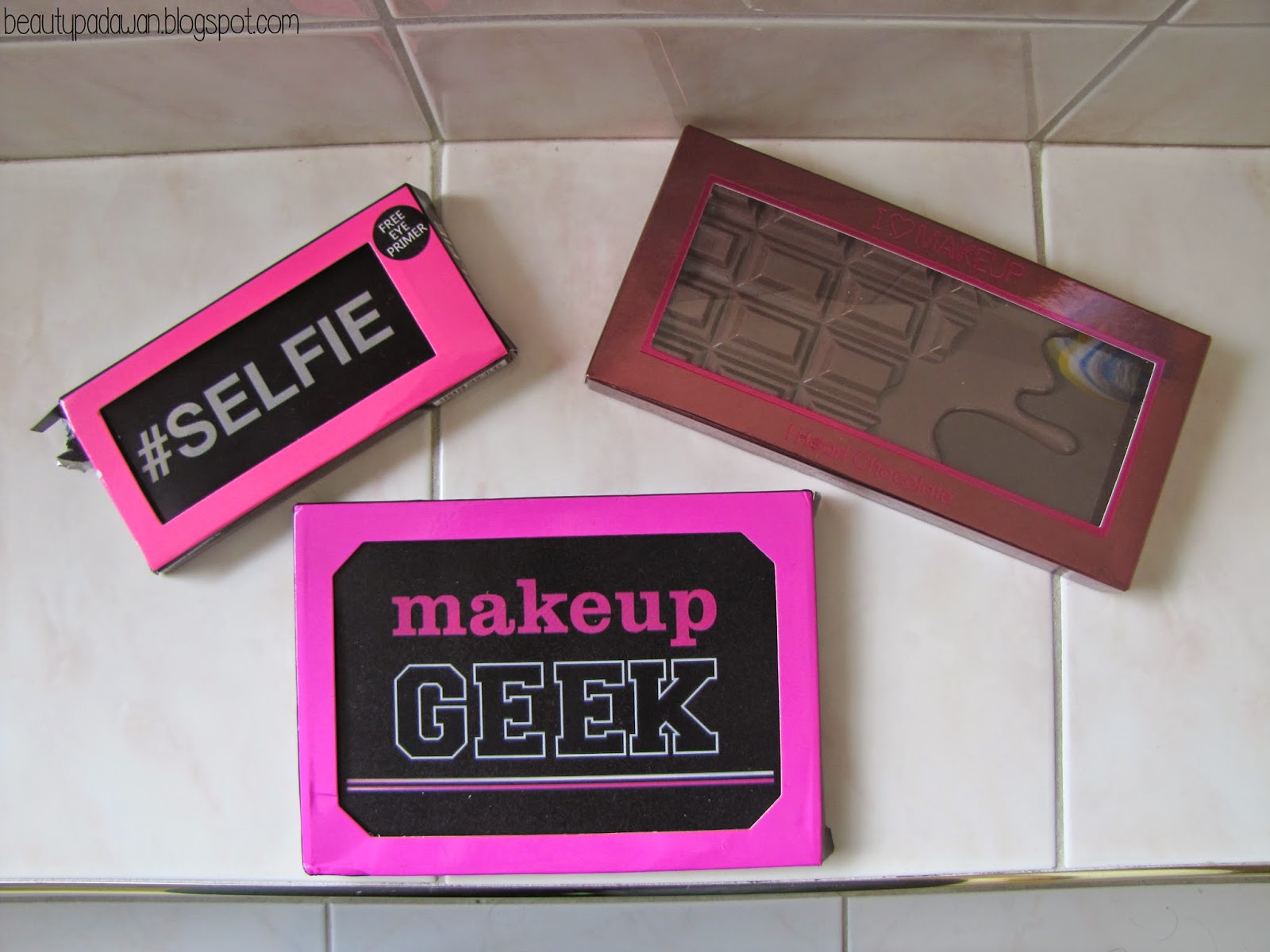 I ♡ Makeup #Selfie Palette -- $9.03 || How could I resist a palette with hashtag selfie written all over it? After enjoying a TV show with the same name, it was inevitable that this would be in my shopping cart. This palette is smaller than my phone -- perhaps about the size of an iPod Touch -- but it contains ten really pigmented shades. From looking at it, it actually reminds me of the Urban Decay Naked palettes, although as I own approximately none of them, I couldn't tell you which one -- perhaps the original one. This palette came with a free mini eye primer, which I think will be exciting to use.

I ♡ Makeup I Heart Chocolate Palette -- $14.46 || This is supposed to be something of a dupe for the Too Faced Chocolate Bar for a fraction of the cost. Just looking at it, I can see all the markers for that: the chocolate bar design, the layout of the palette, even some of the colours. The clasp isn't anywhere near as tough as the other palettes, to the point where I would not be comfortable with keeping it outside of the box. I'll be very interested to do a comparative review with the Chocolate Bar palette later on down the line.

I ♡ Makeup Makeup Geek Palette -- $14.46 || This was a palette that I was very excited to buy and try, but unfortunately it came a little smashed up! Three of the 36 shades were crumbled and broken, and although Makeup Revolution linked me to a customer service page to fix it up when I contacted them, I've heard that you can fix it with rubbing alcohol, so I'll give that a try. There aren't any shade names for this palette, which is quite a shame -- I could understand it for a smaller palette, but it will be hard to keep track of colours for this particular palette.

That's it for my Makeup Revolution haul! As you can see, I got more eye shadow than I will likely ever use up in five lifetimes, but I am going to have a crazy amount of fun playing with all of it! (I may also bribe some cousins of mine to practice on them, too!) Even if I don't use it all up, will I buy from Makeup Revolution in the future? You can bet your bottom dollar I will. The whole process was effortless and painless, and because I spent over a certain amount, I was able to get my inexpensive shipping upgraded to tracked shipping for free! I was able to see where my parcel was at all times -- and that journey is sometimes half the fun of ordering from overseas!

Do you have any of these palettes? How do you like them? What do you think of Makeup Revolution on the whole? Let me know your thoughts!