It's been a few weeks since my last "Wednesday Weekly" post -- and now that uni is finally wrapping up for the semester, I should be able to get back to them regularly! This week I had a shot at Jamie Oliver's mac 'n' cheese with crispy breadcrumbs -- it wasn't something I'd made before, but the recipe was easy and I knew that, if it was anything like other dishes I've made with Jamie's name attached to them, it'd taste great too.

Nutritionally, it's not exactly the greatest dish in the world -- after all, you've got copious amount of pasta, milk and cheese -- but now that we're well into winter, it's definitely the kind of comfort food you'll want to tuck into on a cold night. My favourite part about this dish is that it has ingredients which you'll probably have in your fridge and pantry, but you're able to switch it around and play with it -- whether you use different cheeses or stick with the cheapest kind in the shop, it'll suit all budgets and give you a super tasty dinner. 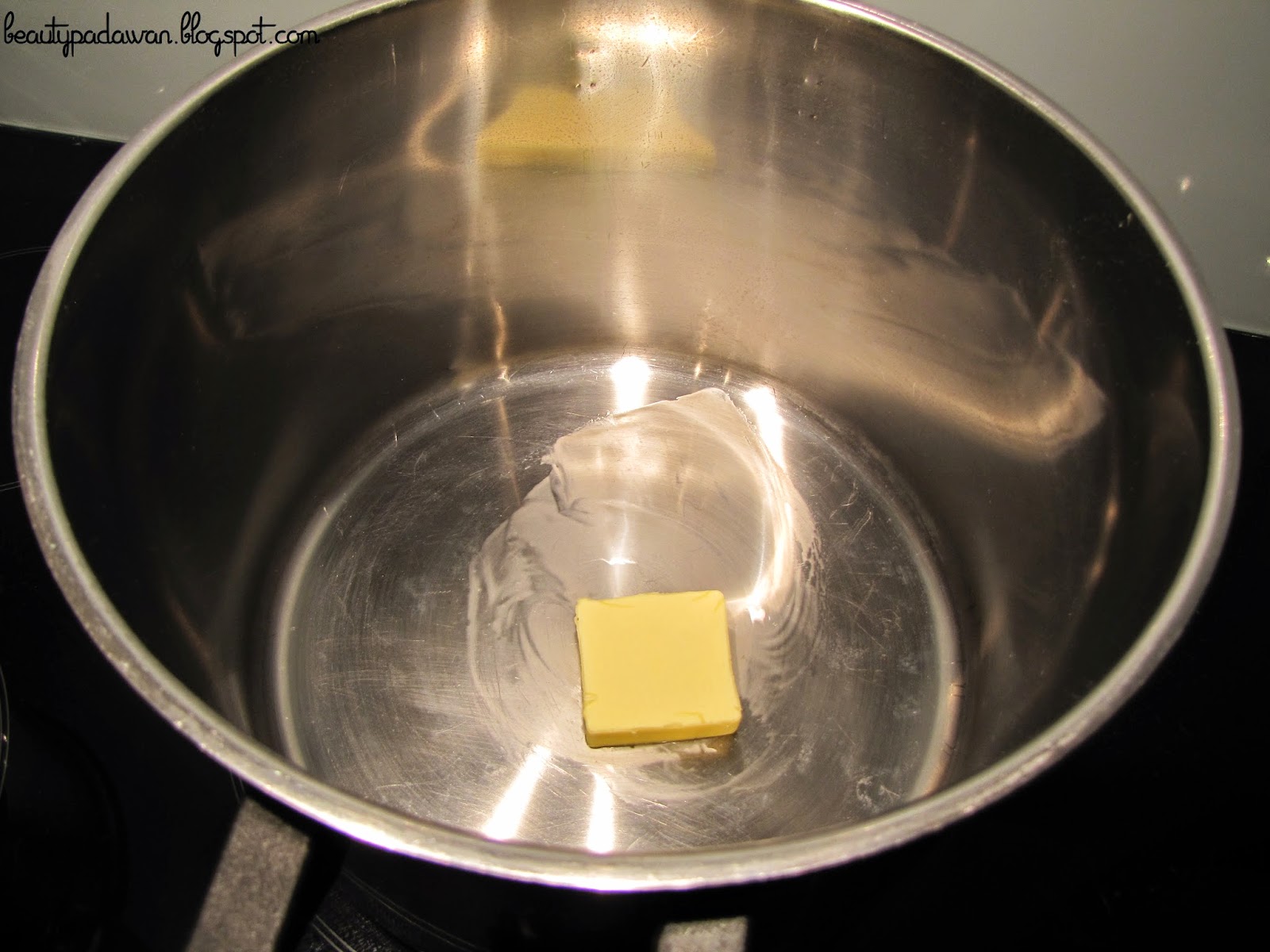 The first thing you need to do is melt the butter in a nice big pot. 45g (about 1.5oz) will do the trick. 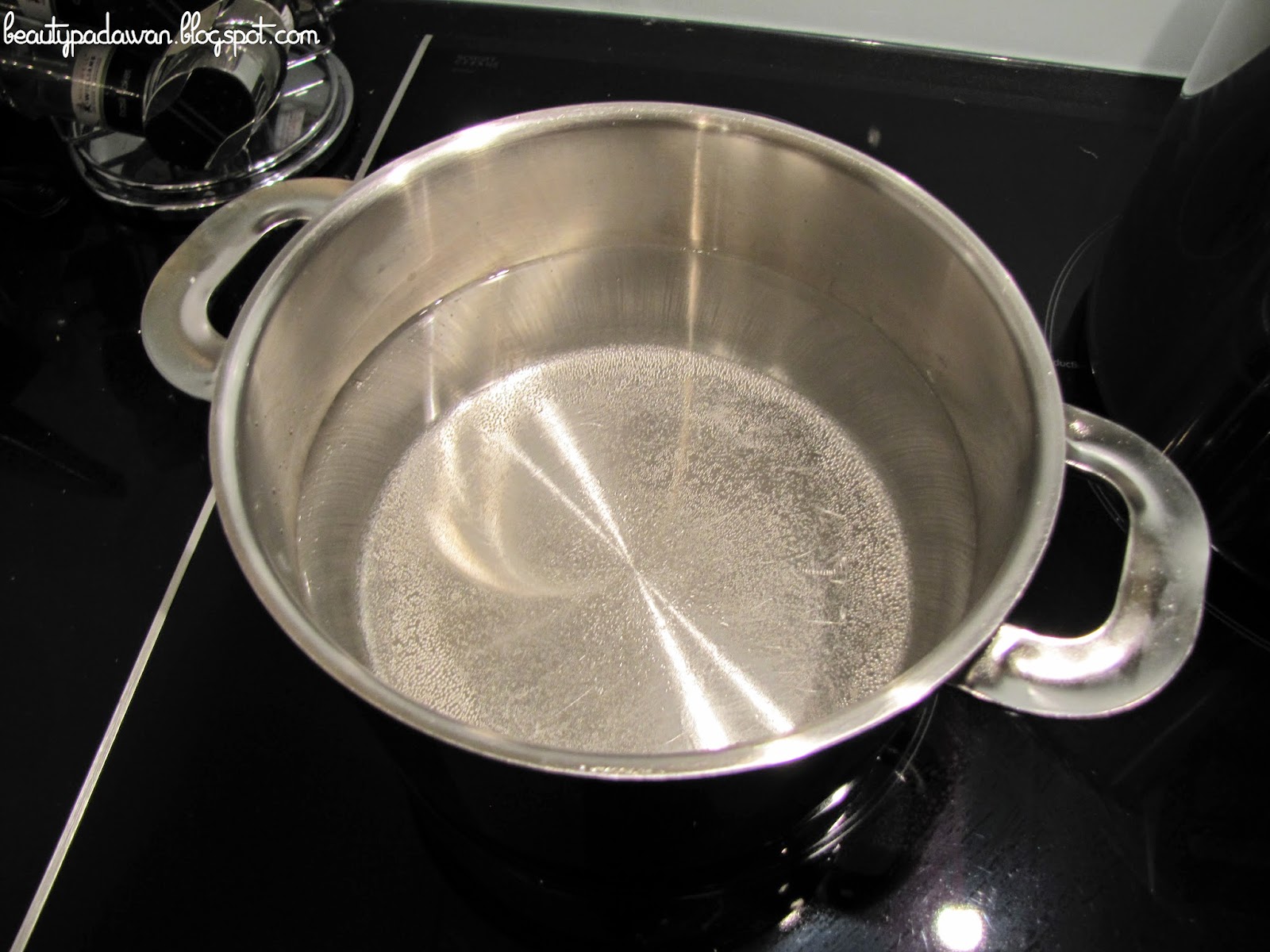 While the butter is melting, get another pot of water onto the boil. Make sure to salt it good! It causes water to either get to the boil quicker or slower -- I think it's the latter, but I can't remember -- but pasta never takes long to cook, so that might just be a good thing. 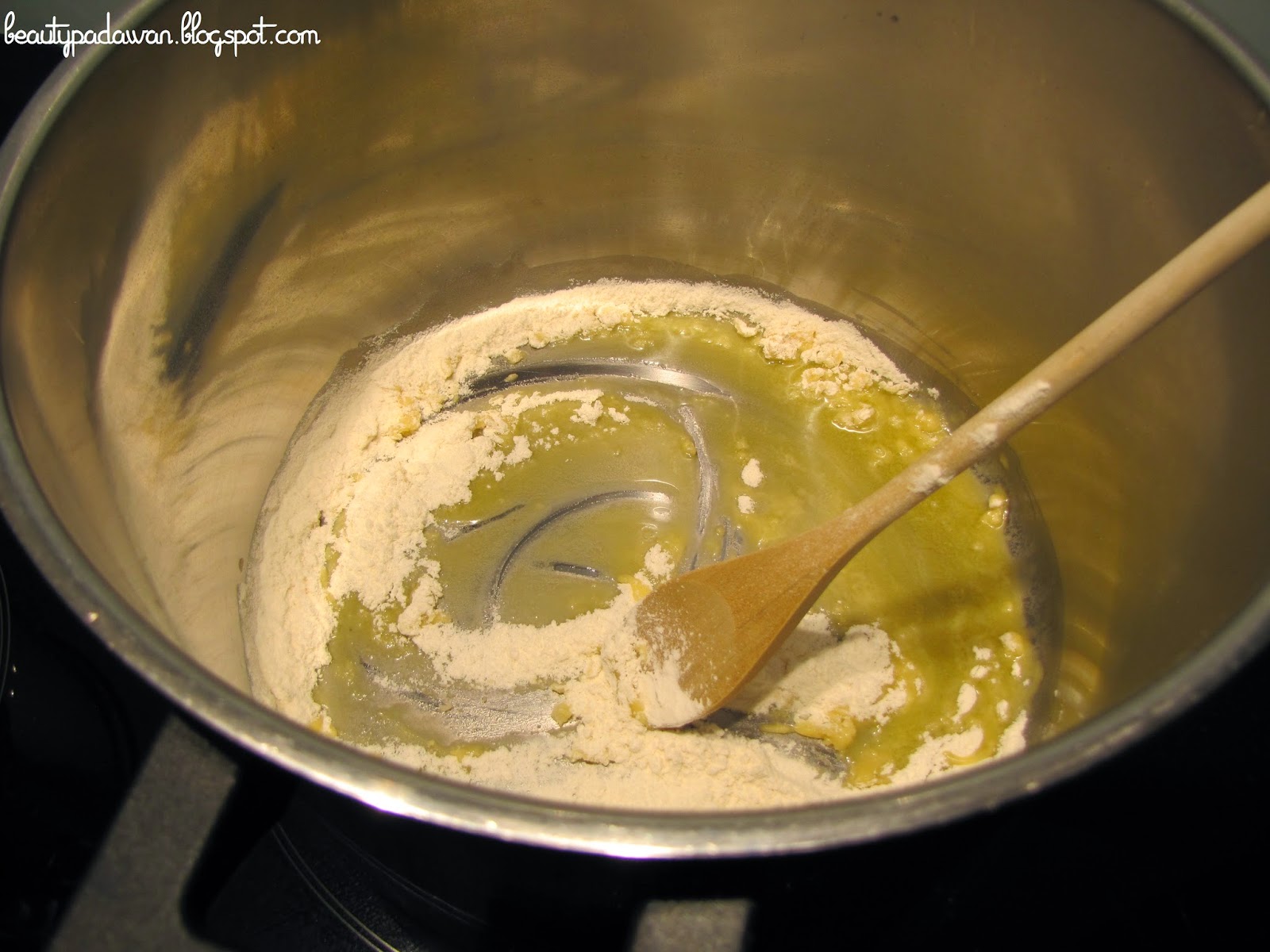 Next up is making your roux. "What in the name of furry yellow peaches is a roux?" I hear you ask. I'm sure proper foodies or budding/pro chefs will have a better explanation, but in this case it means you're dumping in three heaped tablespoons -- yes, heaped, not level -- of plain (all-purpose) flour into the melted butter and mixing it together. 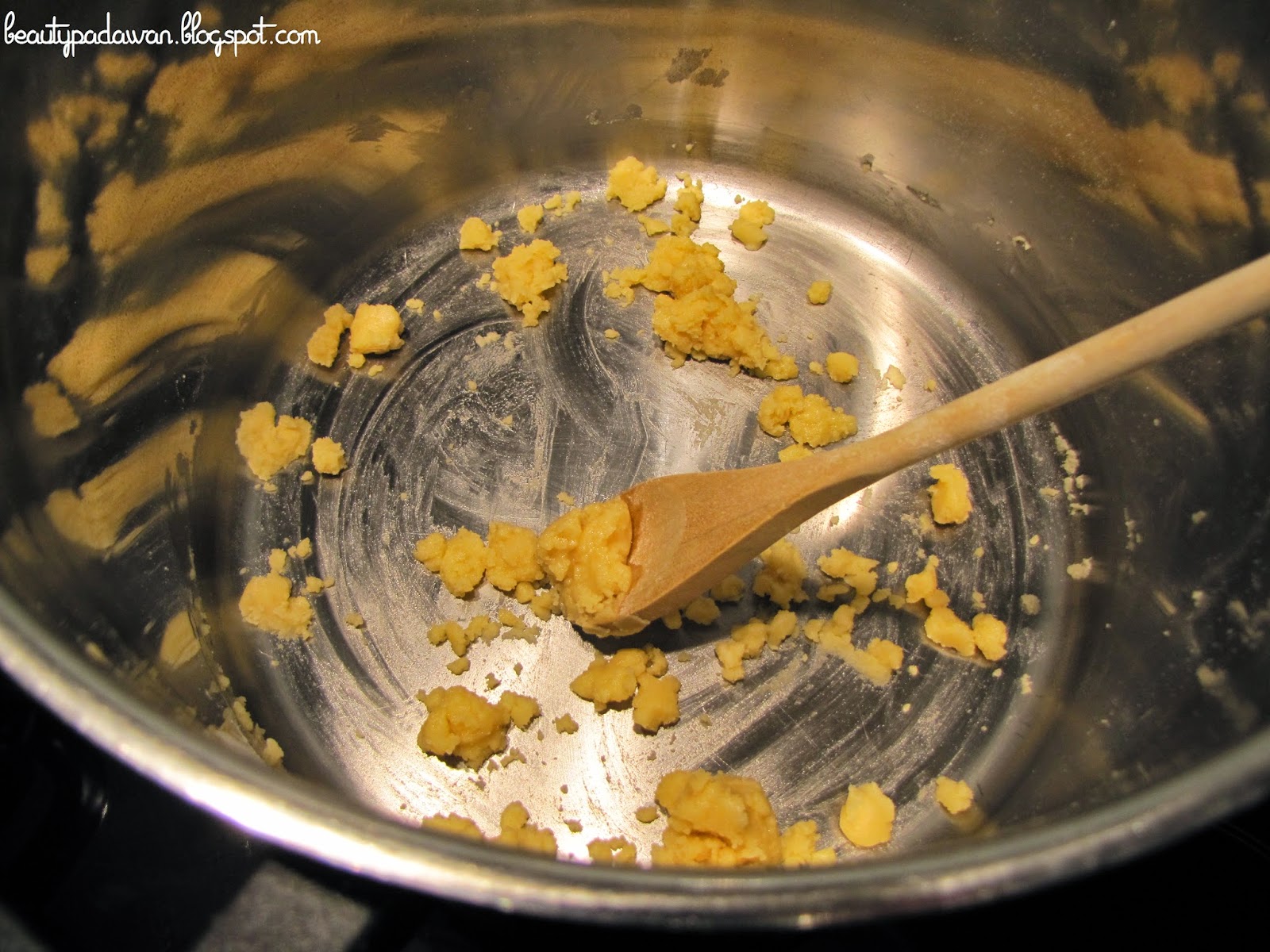 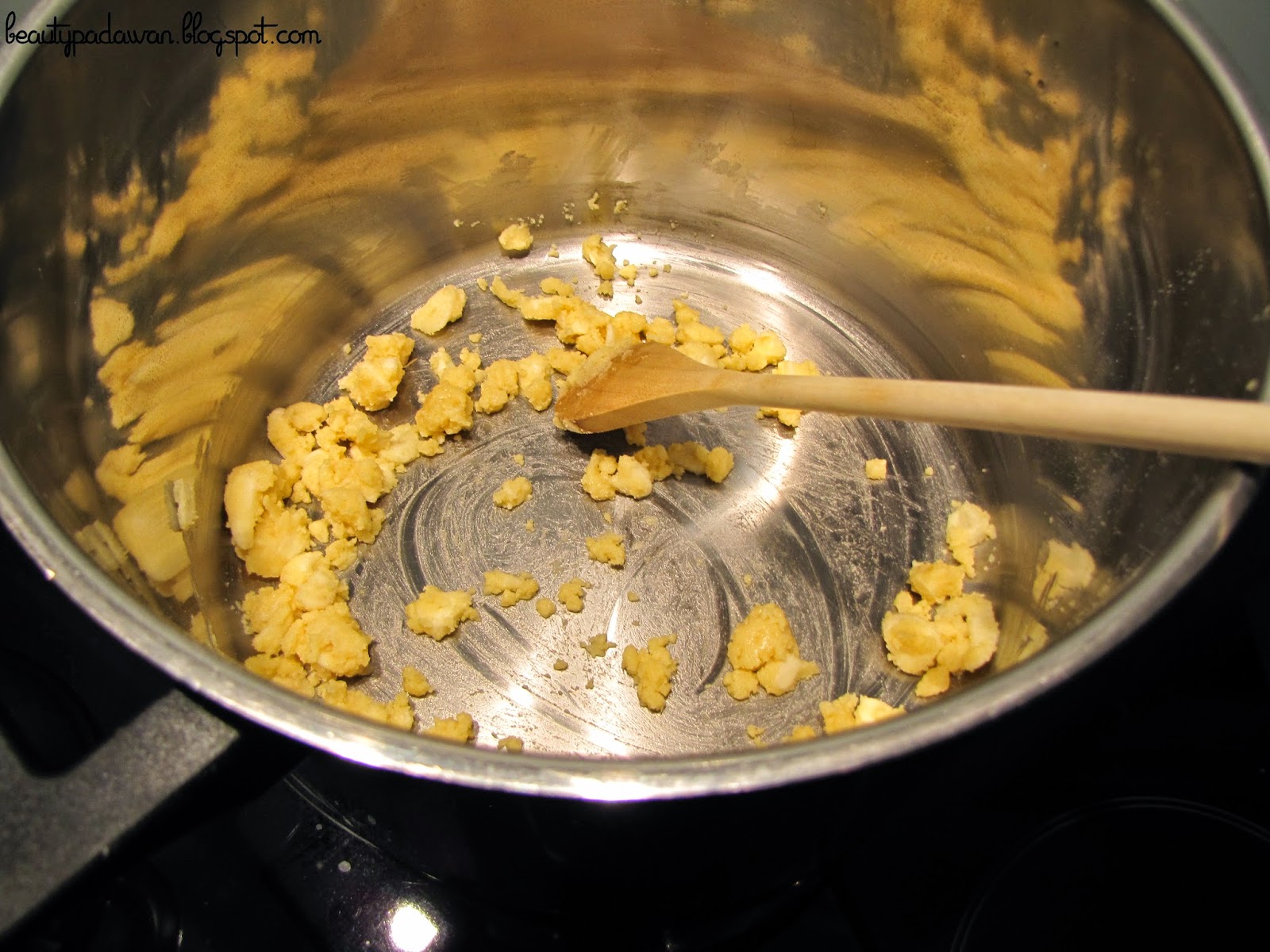 This is the point where you throw in ten sliced cloves of garlic -- yes, ten! My dream! -- in with the roux. You're supposed to keep cooking it until it caramelises and goes golden. I personally didn't notice this happen, but that could be my untrained eye. I just cooked it until it was beautifully fragrant. 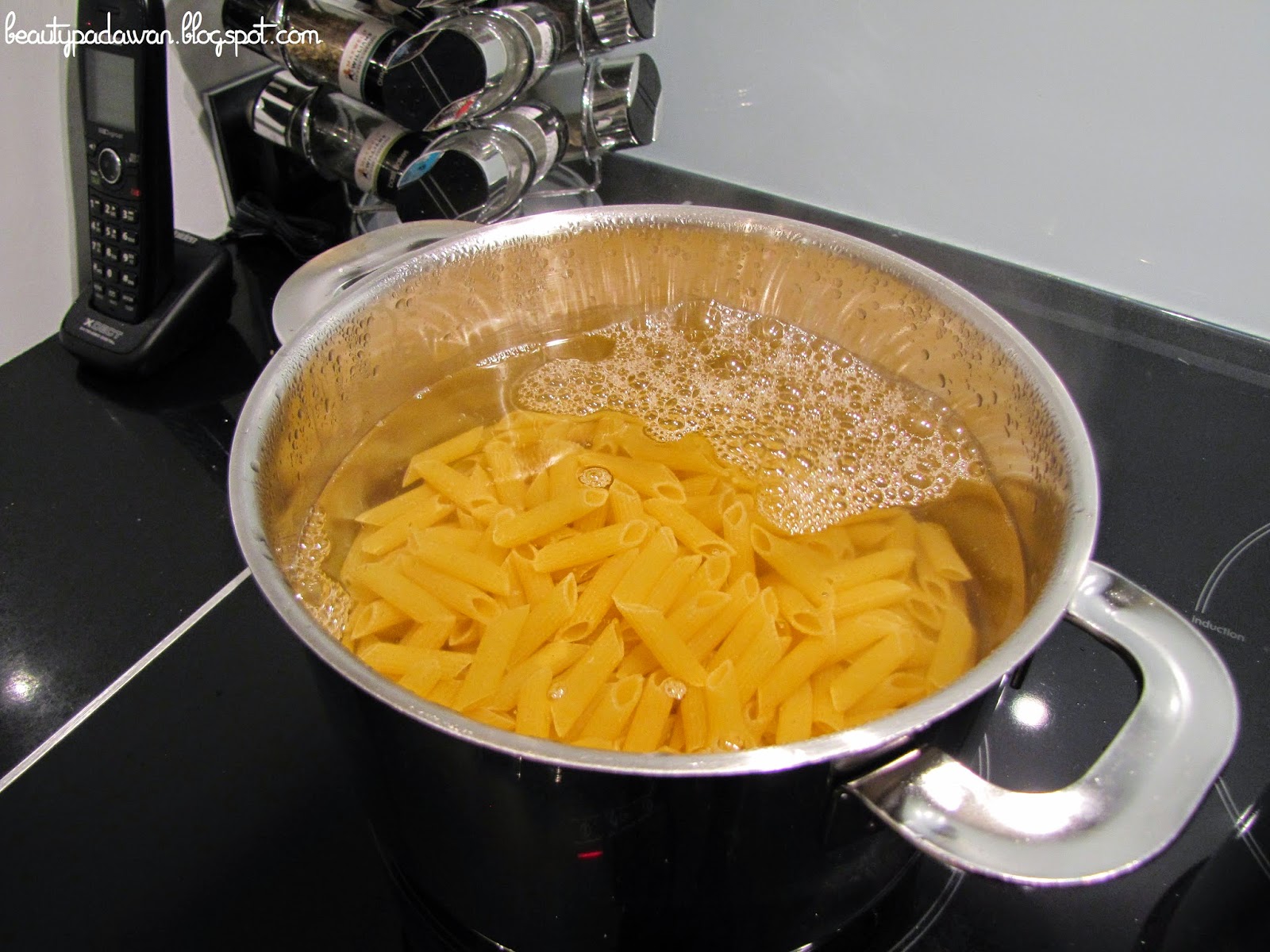 While your garlic has been caramelising/cooking/doing the cha-cha in the pot, you've thrown your pasta into the boiling water. You are supposed to use macaroni, but we didn't have any so I used penne instead. It's all pasta in the end! Cook the pasta per the instructions -- for me, that usually means waiting for the water to come back to the boil, then turning it off and leaving it for ten minutes before draining. You may have a better way to cook pasta. 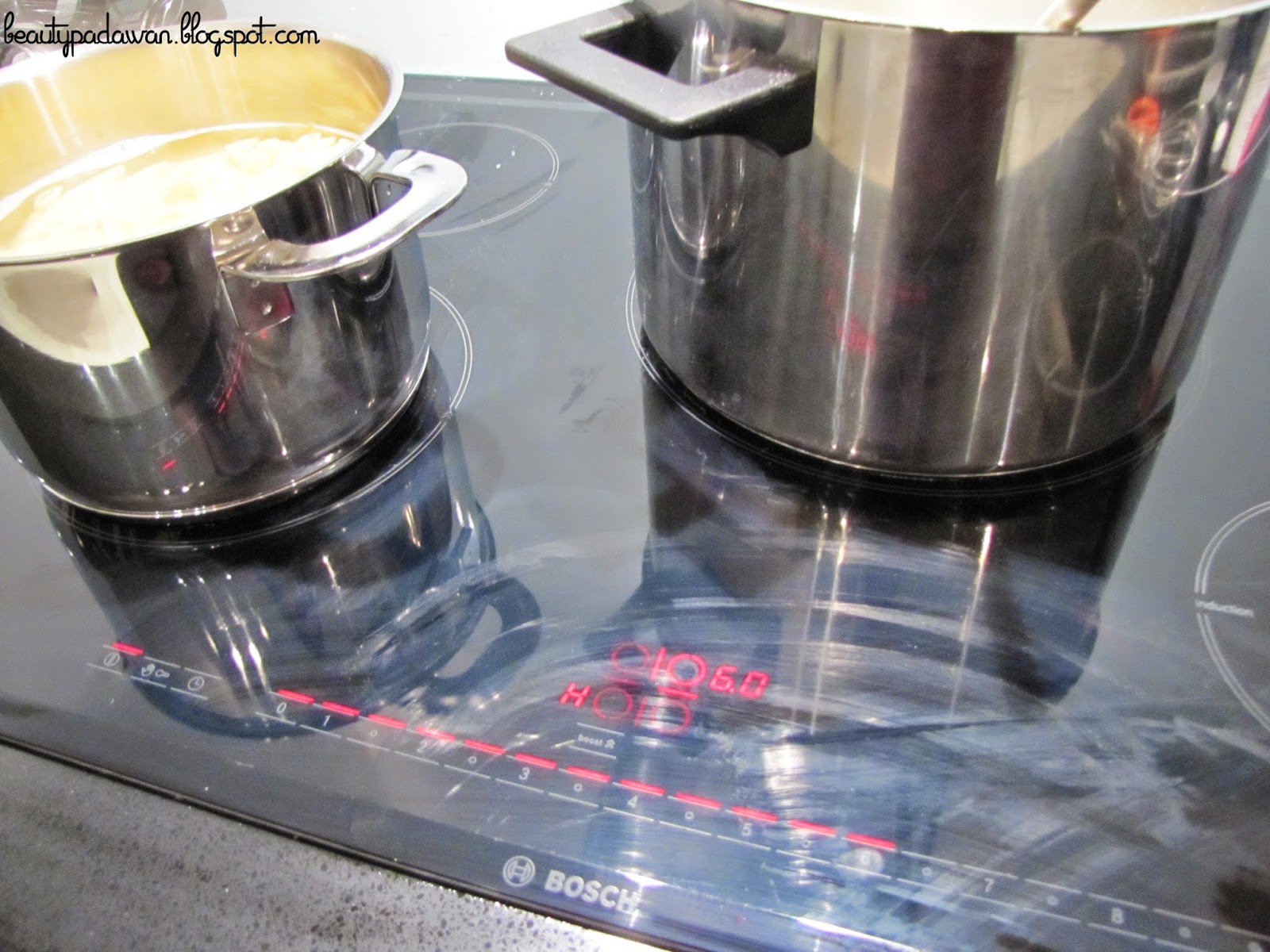 Add this point, you need to add a litre (or 4 cups) of milk to your big pot, a bit at a time. The recipe called for semi-skim (low fat), but I just used regular old skim. Be careful that your pot isn't too hot, because otherwise when you first pour some of the milk in, it'll hiss and bring up a huge cloud of steam -- this might startle you and cause you to spill milk all over your cooktop. Which I totally did not do. The cooktop was dirty from someone else spilling milk all over it. Yes, that's it. 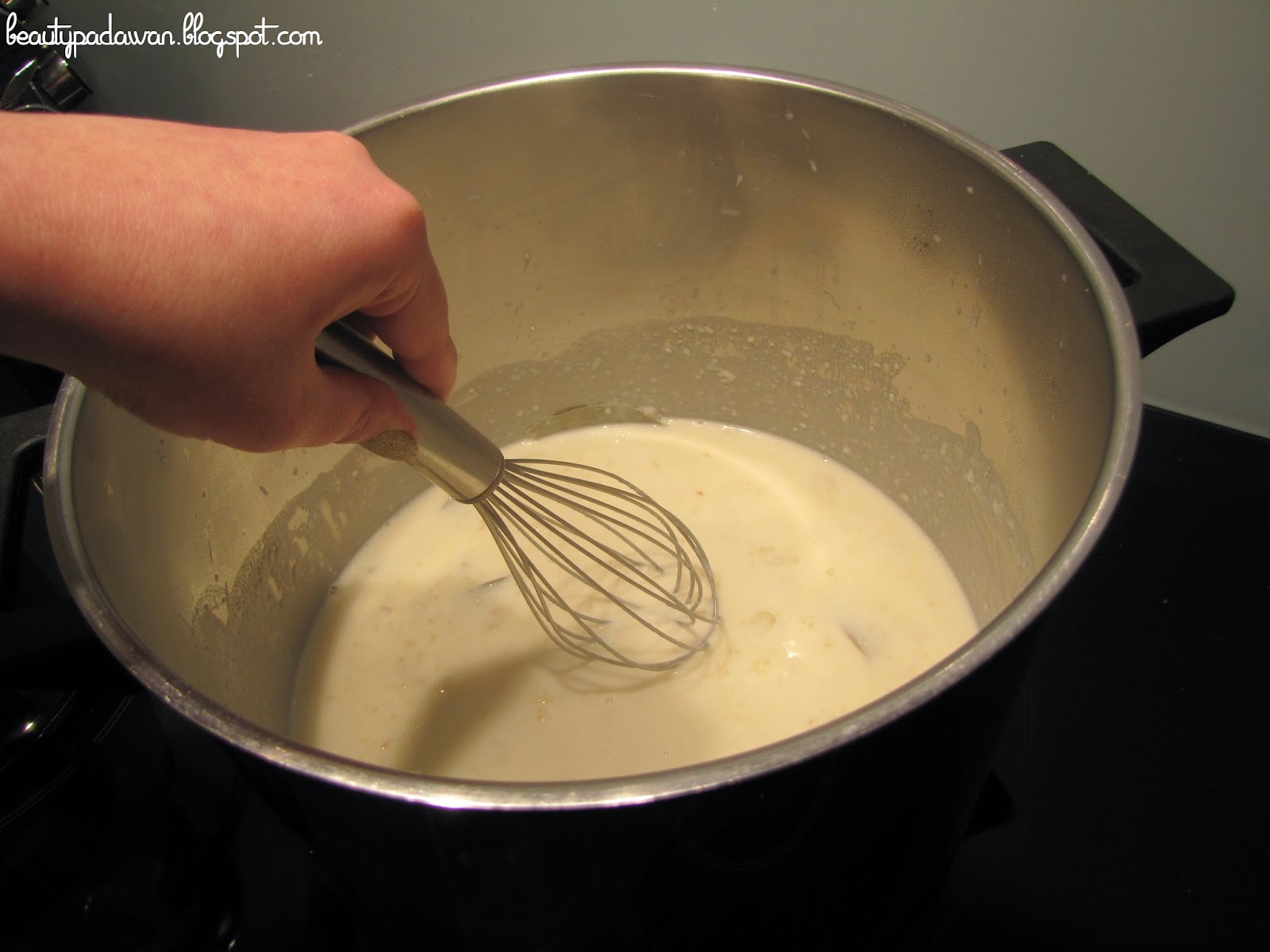 With a whisk -- and hopefully a better one that what I used -- you need to keep whisking together your roux and milk until it gets all nice and smooth. You keep adding more and more milk until there's none left to add. 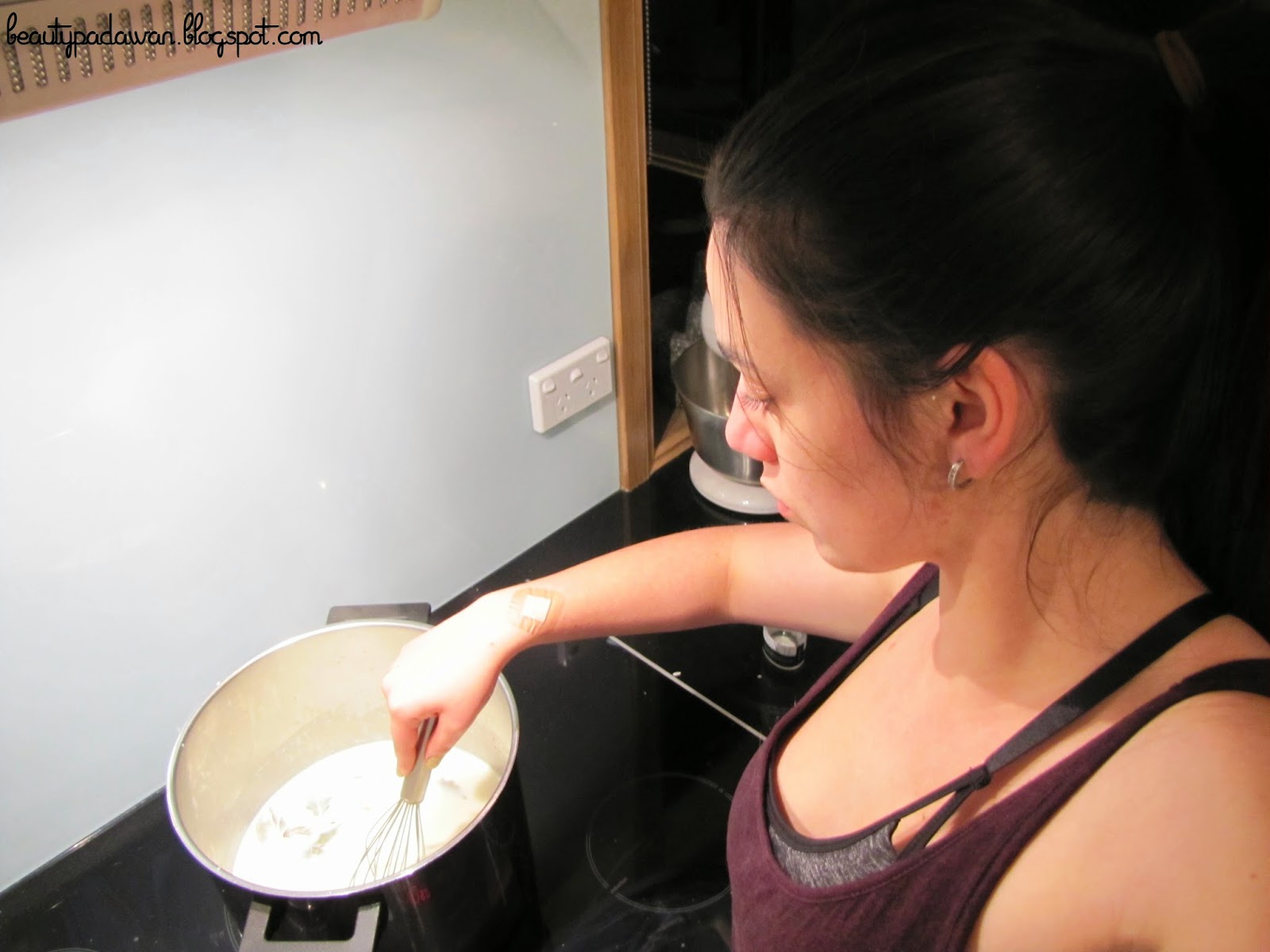 You need to stir constantly. Once it's smooth, you need to bring it to the boil, then lower the heat so that it simmers. 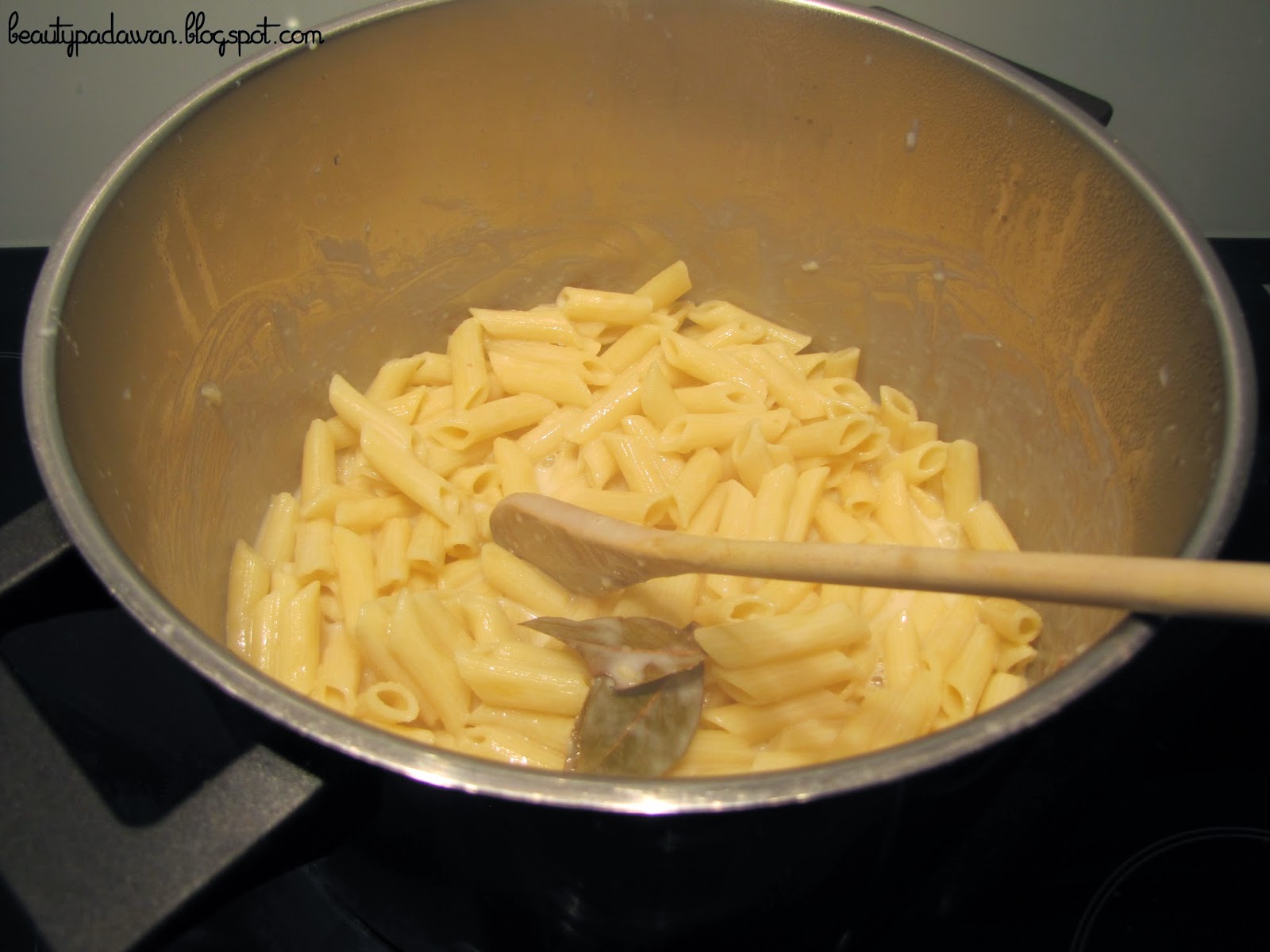 Once your pasta is cooked, drain it and chuck it straight into your big pot! Throw in half a dozen bay leaves and give it a really, really good sprinkling of thyme. The recipe does call for fresh thyme -- I just used what I had. 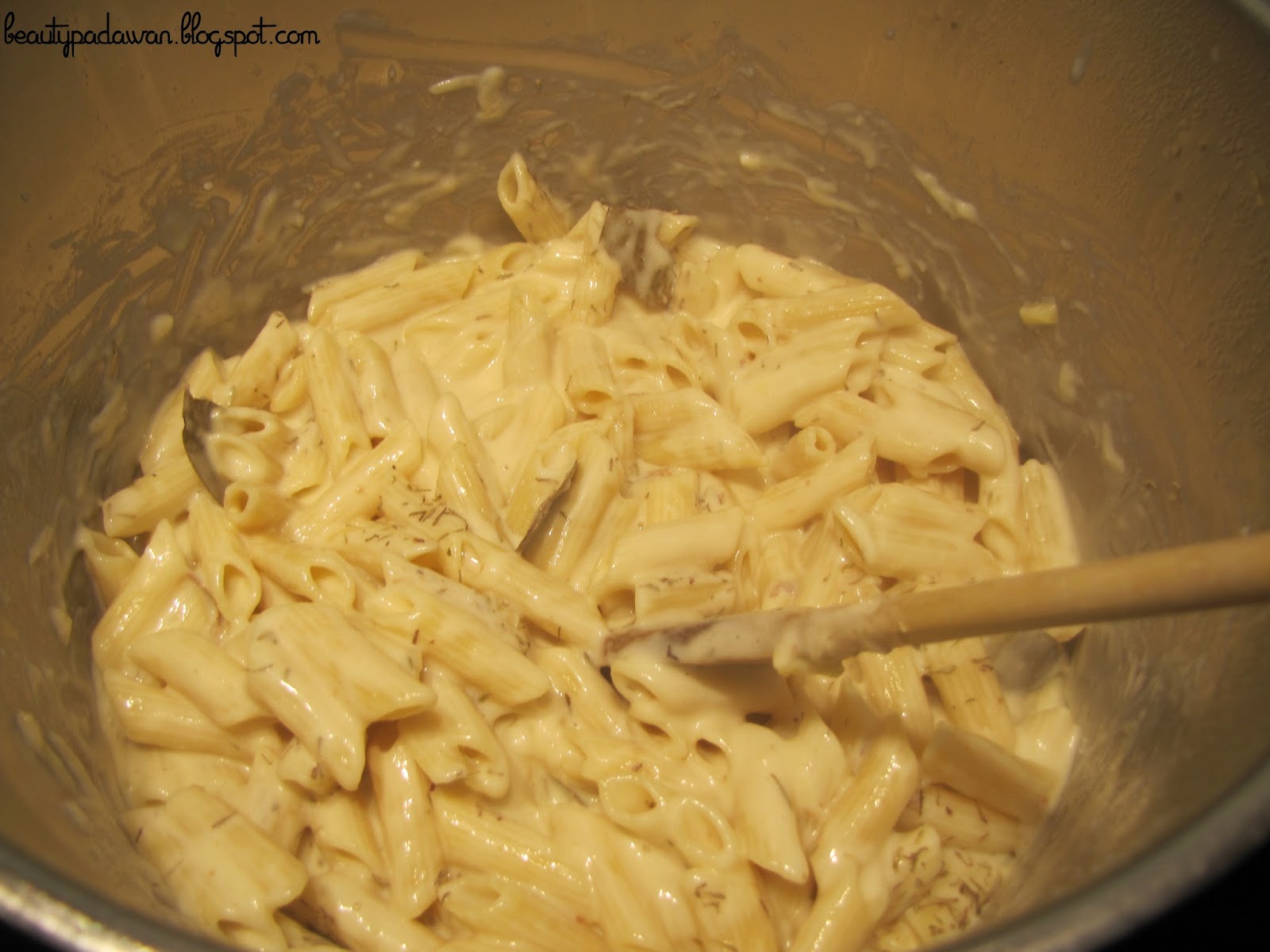 Add the cheese in now. The recipe calls for 150g of cheddar cheese and 100g of parmesan cheese, but I just used a 250g bag of mixed cheese that was supposed to be good for melting. This is a good point for people to experiment a little bit, particularly if they like their cheeses! Give the pasta a really good stir, until the cheese has melted and you can't see it anymore.

At this stage, you may want to add in a good splash of water if you feel like the sauce isn't runny enough -- it is supposed to be slightly runnier (or "wetter") than normal, because that'll cook out in the oven.

You can pick out any bay leaves that are on the top, but otherwise leave your family to their mercy! Make them pick it out themselves! 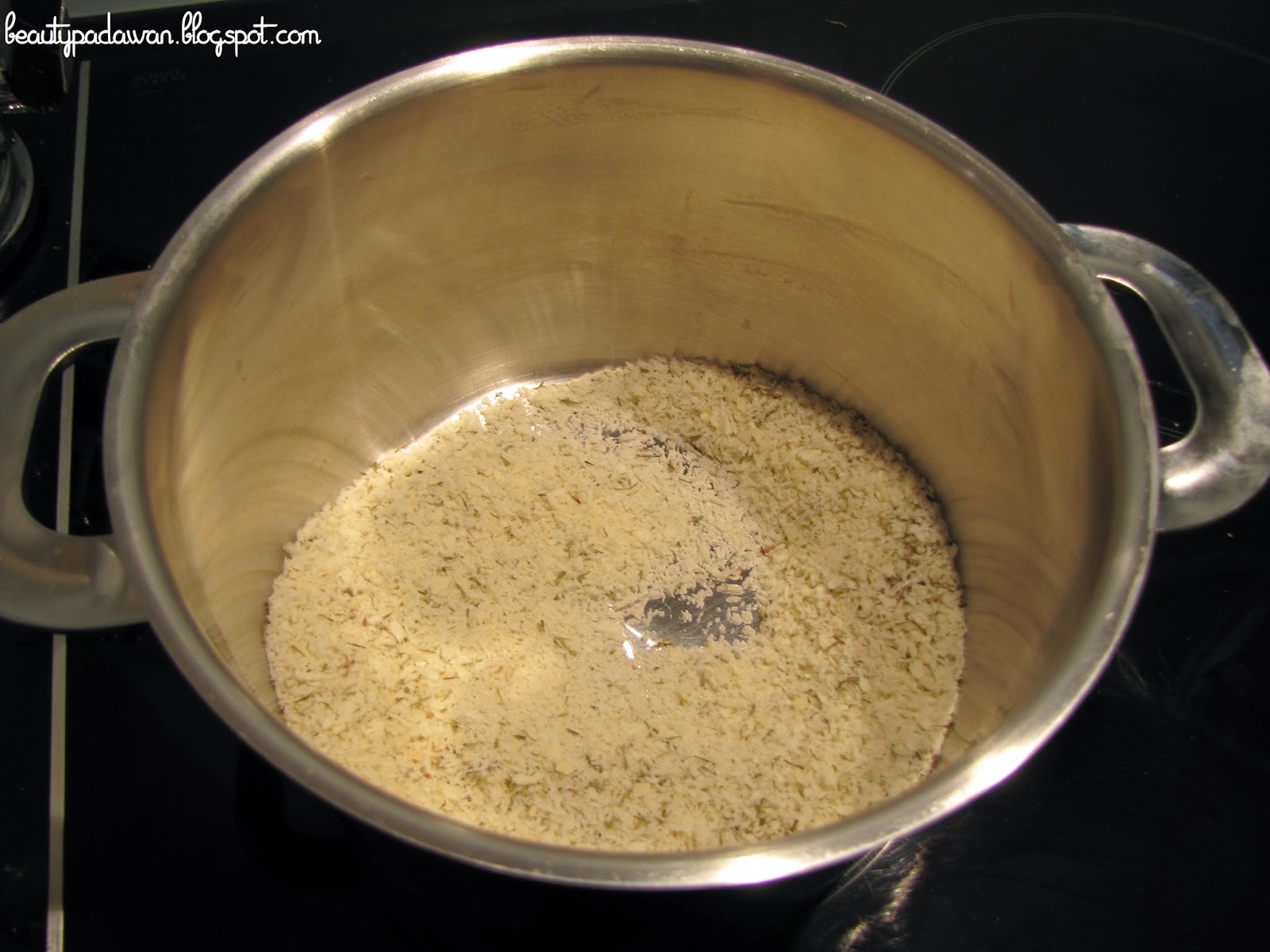 Now's the time to make your crispy breadcrumbs. You need three good handfuls of whichever kind your bountiful pantry holds -- I used panko (Japanese) breadcrumbs for something different -- and you need to throw them into a pot. I just washed the pot I cooked the pasta in and used that -- you can use a smaller one if you want, but you'll need to keep in mind that cooking the breadcrumbs will take longer. Of course, if you're no Jamie or Nigella, you might want to stay away from the largest pot in your collection -- in case you end up burning them. Burnt breadcrumbs are ick.
You need to add some thyme in with them: I just kept shaking and stirring until I had an amount that I liked. If you want measurements, try perhaps two teaspoons, then see how it looks.﻿ 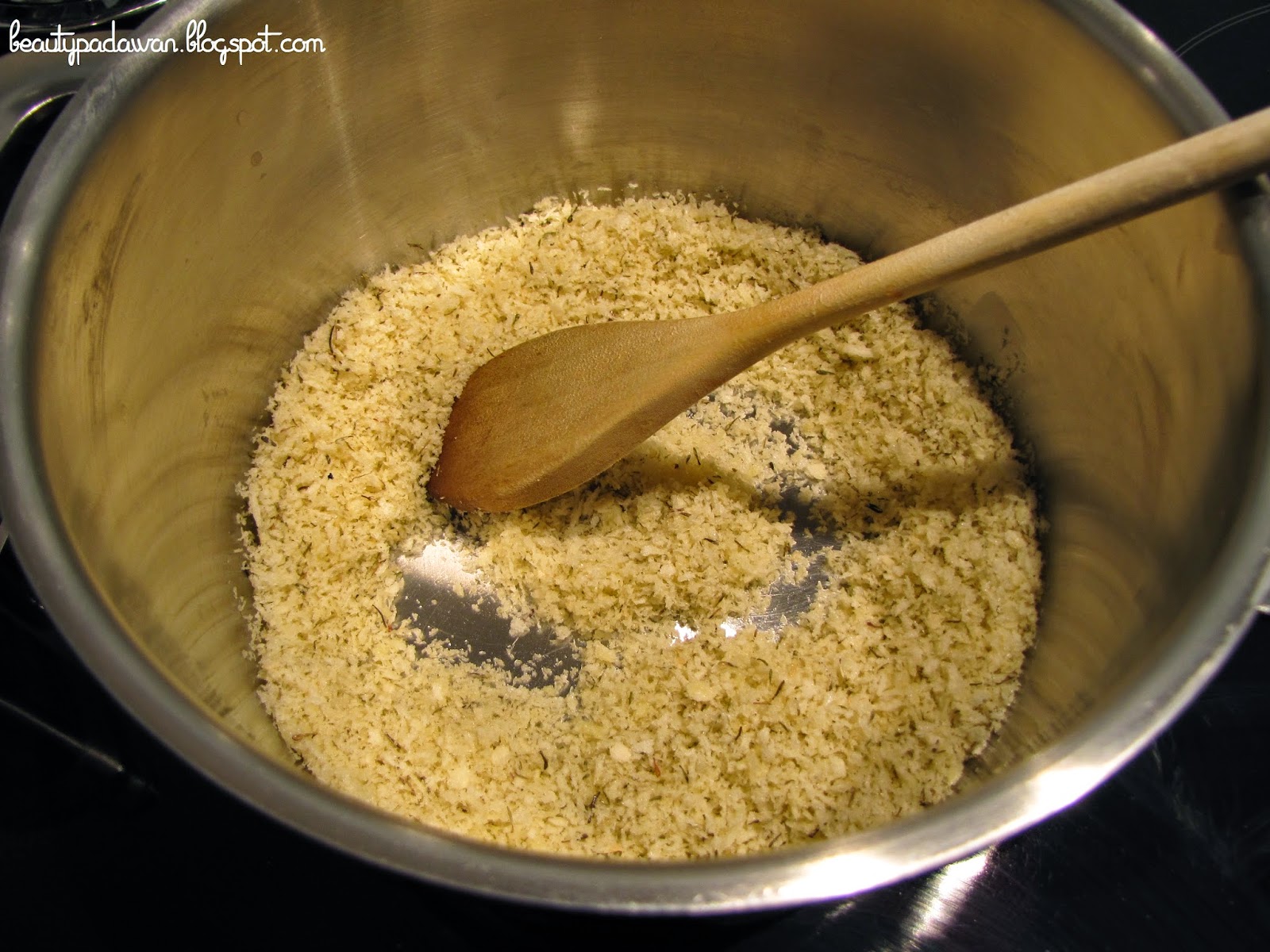 With the﻿ breadcrumbs and the thyme, you'll need a nice splash or three of olive oil. If you're not sure what that really means, it's literally a splash from the bottle. Take it easy if you're worried about adding too much, because you can always add more later. Anyway, crank the heat on your stovetop to about medium and start stirring as your breadcrumbs start to toast. 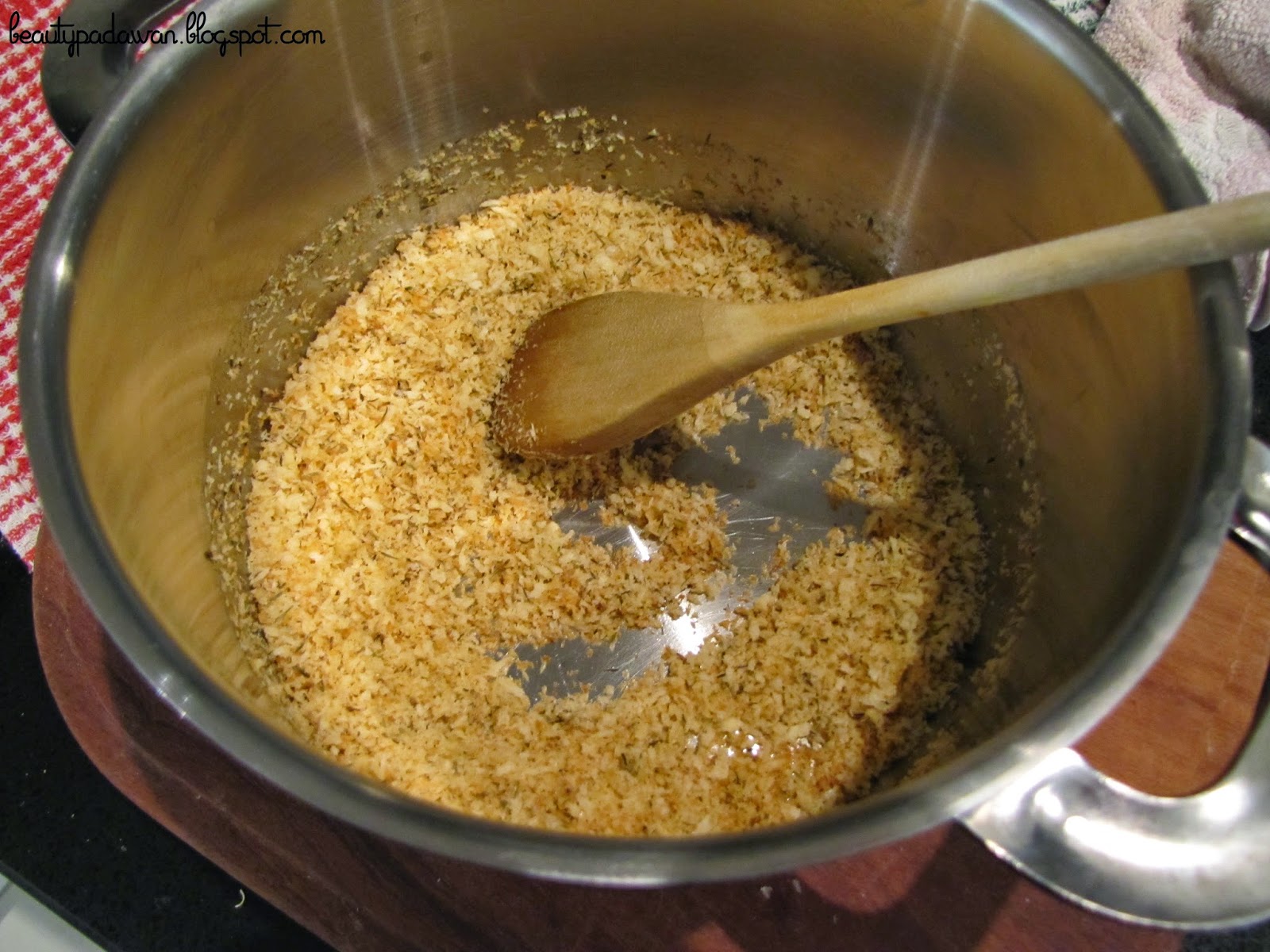 I find that it can be tricky to sometimes be sure about whether or not your breadcrumbs have crisped up, especially if you're using a kind like panko, which is already crispier than your standard breadcrumbs. Be on the lookout for the breadcrumbs to start turning a golden colour -- it might take a few minutes, but it'll definitely happen. Just be careful to not leave the doubt for too long, otherwise you may burn them. 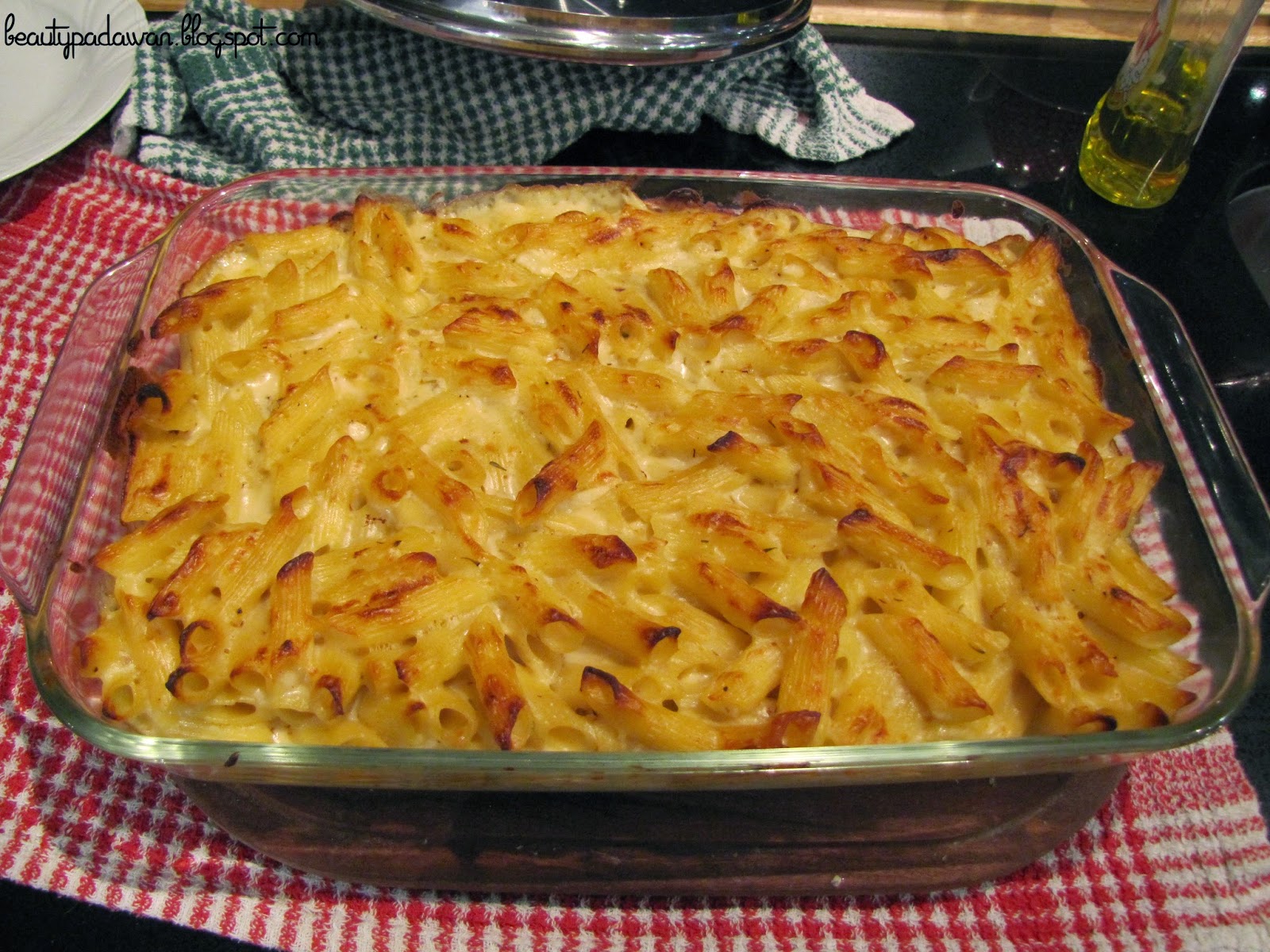 Once half an hour has elapsed in the oven and your timer is begging you to take it out, let it sit for a couple of minutes. Some of my pasta clearly got slightly too toasty for comfort, but the dish itself wasn't burnt.

Dish the mac 'n' cheese into bowl with a spoonful of breadcrumbs and voila! dinner is served! My family and I thought it tasted quite good -- I would say more like a slightly cheesy pasta bake than the mac 'n' cheese you can buy packaged (pretty much the only kind you get in Australia), but that will really come down to the cheeses I used. I think I'll want to play around with it some more until I get a rich flavour combo that hits the spot.

I've mentioned this before, but the original recipe belongs to Jamie Oliver, and he has it on his website here. I did change a few key things (such as leaving out tomatoes, because tomatoes are gross), but otherwise I mostly stuck to it. The recipe can also be found in his published book, "Jamie's America".

Disclaimer: I wasn't sponsored in any way to do this recipe -- my life just simply doesn't work that way.

Let me know your thoughts on this recipe! Would you try it at home?