Blogmas Day 13 | You're It! The Christmas Tag

Given that Christmas is about a week and a half away, it only feels fitting that I write at least one Christmassy-type post before it comes and goes, right? There've been several Christmas tags floating about, but this I got from the daisydaisyxxo -- it was the first one I saw! 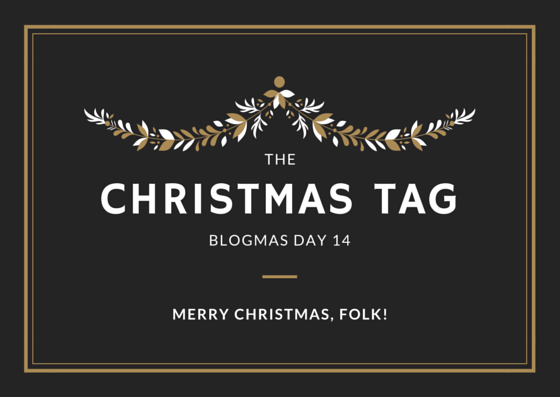 1.  What is your favourite Christmas movie/s?

Maybe I should've gone with Home Alone 2 -- that's totally got Christmas all over it.

2. Do you open your presents on Christmas Eve or Christmas morning?

It's usually Christmas Eve. As kids, we'd open all of our presents then, before getting presents from Santa the next morning. When we got older and "learned the secrets of Santa's workshop" (as I once so cleverly put it when asked why Santa doesn't visit me anymore), we'd have a small additional gift on Christmas Day from our parents. Until a few years ago, I actually thought that everybody did it this way!

3. Do you have a favourite Christmas memory?

I don't think I really have one stand-out memory, as such, it's more how I felt about Christmas as a kid. Seeing mountains of presents under the tree on Christmas Eve to be distributed to my brothers and cousins and other relatives was exciting. I'd go to bed late that night, carefully ensuring that my Santa sack (a giant Christmassy pillow case) was laid out neatly in the lounge room, then wake up the next morning to see that it miraculously full! Christmas was an incredibly thrilling time for me as a child -- my parents went above and beyond to make sure that my brothers and I enjoyed every minute.

I don't know, really... I've had many, many gifts that I've absolutely loved over the years. There was this time where for about six or seven years I was actually able to accurately guess the gifts that people got me. Perhaps some of the things I loved the most were: a Baby Born when I was six, a pair of GHDs (how old was I? Seventeen or so, maybe?), and a Kardashian handbag (around the same time as the GHDs, give or take a year either way). That Kardashian handbag had been one I'd seen and wanted for the longest time.

I don't really have one.

7. Do you have any Christmas Eve traditions?

We alternate Christmas Eve at different houses -- so one year might be at my house, another at my aunt's, and so on. It sounds kinda lame, but it's the only tradition I can think of!

Usually an angel but it's gone AWOL this year!

9. As a kid, what was the one (crazy, wild, extravagant) gift you always asked for but never received?

A million dollars so that I could give it all to my mum for working so hard.

10. What's the best part about Christmas for you?

I think it's giving people their gifts. Christmas has lost a lot of its sparkle for me, this year especially. I've been pretty grouchy about the whole thing, but I look forward to giving people a gift that's really been thought out.

That's it for this little tag post! If you're into Christmas, I tag you to do this -- but make sure to give me a link so that I can read your answers!

Email ThisBlogThis!Share to TwitterShare to FacebookShare to Pinterest
Labels: Blogmas, lifestyle, You're It!