I don't often talk about books on the blog, mainly because I love chattering on too much and my posts would be longer than my thesis. I haven't quite worked out the way in which I want to talk about the books I read or the TV shows I watch -- I'll get there, but I'm not there yet.

That being said, several months ago I was having a great chat with Aoife from Pretty Purple Polka Dots, an Irish book blogger who has no shortage of suggestions should you be looking for something to read. While I can't remember what our chat was about, it led to her asking if I wanted to participate in a book swap with her! And why wouldn't I? It's great to connect with others in the blogging community, and sharing something you love with someone else who you just know will love it too... There's nothing like that.

So we grabbed each other's details, found out about each other's interests and began digging to locate a book that we knew the other one would love. 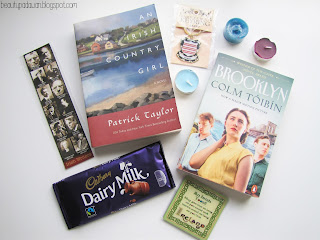 What did I get Aoife? Well, you'll just need to pop over to her blog and have a look. No spoilers from these lips!

Before you do that, however, let's get stuck into what arrived in my mailbox!

An Irish Country Girl by Patrick Taylor || This book appears to be a prequel to other books by Patrick Taylor, about a woman named Kinky Kincaid (given Ireland, this is most probably not pronounced the way it's spelled), whose real name is Maureen O'Hanlon. It seems to be set in the earlier part of the twentieth-century, with supernatural elements that really intrigue me. It makes me wonder if it ties into Irish folklore -- and as someone who loves history, I'm excited to find out!

Brooklyn by Colm Tóibín || I've definitely heard of the movie and the book on which it was based, and I recall there being a great deal of fuss being made, but as I tend to be very lazy when it comes to jumping on bandwagons (both literally and metaphorically), I never really looked into it. This one's about a girl named Eilis Lacey, who emigrates to North America to make a future for herself, only to have to return to Ireland later on. I'm not gonna lie, it's piqued my interest as well!

Aside from these titles (both of which sound really good), Aoife so very kindly sent me some other bits and pieces too! A bookmark featuring Irish writers -- always handy, as I tend to dog-ear my pages (sorry!); a block of Dairy Milk that has long since been demolished; a magnet with an Irish toast on it; a few candles, one of which I know to be a Yankee candle (hallelujah!) and all of which smell incredible; and a keyring.

But not just any keyring -- no, no, this keyring has my surname and my family crest!

Can someone please find me a gif to accurately describe my joy?

I didn't need to read my surname to know what it was when I saw it. While my particular strand of Barry DNA has Cornish origins instead of Irish, I've nevertheless always kind of unofficially adopted this crest as my own. I can't wait to attach it to all of my keys!

That just about sums up my absolutely awesome package from Aoife! Don't forget to check out her blog to see what I sent her -- I know I sure will be (partly because aside from the book I forgot what I sent her).

Have you read these books before? Did you watch the film Brooklyn when it came out? Let me know!