Mascara. Y'all know that I love it. I had eighteen at last count, and that number has continued to grow over the course of the year. Am I obsessed? No. Not at all. I don't know why you might think so.

I wasn't too drawn in by the Lash Sensational mascara initially, not because I thought that it would be rubbish, but because I knew that I definitely had enough as it is -- and I figured I'd be better off staying away from mascara in general until I had an opportunity to go through my stash and throw a few out. That's when More Than Adored happened. You'll remember from this post that Sarah from More Than Adored is one of my favourite bloggers; she's someone whose opinion I trust -- and if she starts raving about a mascara, then I know that I must climb every mountain to get that mascara.
﻿

Despite resisting my urges for a couple of weeks, Woolworths had me give into my urges by putting it on sale for half price -- and the rest is history. I've been trying this mascara for several weeks, as I wanted to see how well it would work over that period of time.

"But why?" I hear you ask. "Surely you can get an idea of how well it works after using it for a week."

This is true. However, the first thing I noticed upon opening the tube was that there seemed to be a lot of product on the wand -- and this is not something I usually notice or care about. More on that later, however.
﻿

The Lash Sensational mascara is housed in a sort of blackened pearly pink tube -- the shape of which is pretty standard. There's nothing about the packaging that especially screams cute or adorable, so if you really do want to stay away, you should be able to prevent yourself from making an impulse purchase on appearance alone.

The wand has bristles that vary in length to form a curved arch. I've heard that it looks just like the Benefit Roller Lash mascara, but as I haven't seen that mascara myself, I can't personally confirm it. The bottom side of the brush has brushes that taper out a little towards the stem -- think the L'Oreal Paris Butterfly Wings mascara, but not as long. These bristles are meant to help reach every lash, thickening and fanning them out. The formula is described as "liquid ink", meant to ensure that it doesn't clump. 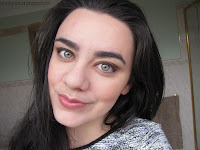 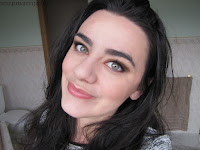 Not wearing the Lash Sensational mascara (left) vs. wearing the Lash Sensational mascara (right)
﻿
Unfortunately, I think it does have the potential to clump. The formula looks very wet, and, as I mentioned before, a lot seems to come out on the applicator, so I find that I need to be very careful when I apply it. It does indeed fan out my lashes, making them long and voluminous, but I have found that if I'm somehow careless when putting it on, or if there appear to be remnants of mascara that I missed getting off the night before, my lashes can sometimes begin to stick together. To be fair, I haven't ever been left with huge, spidery lashes -- I have seen way worse mascara travesties on other people -- but if your lashes tend to clump when using mascara, this might be one to avoid. It's why I've taken several weeks to test it out; to see if the formula applies better as more of it is used or as it dries a little more. I would say that it does, but I'm still careful. 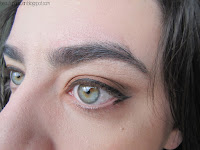 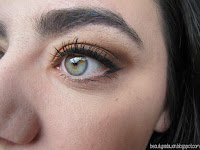 Comparison photos between not wearing the mascara (left) vs. wearing the mascara (right).
Please pardon my eyebrows!
﻿
In terms of general performance, however, it is stellar. There's no fall-out or flaking throughout the day, and it's hardy to the point where it's actually rather tough to get off. An oil cleanser tends to do the trick, of course, but if you're not into such a mascara then, again, you may want to give it a miss. There may have been times in the past where I've been too lazy to properly take it off, and it's still there the next morning -- not in all it's original glory, but there all the same.

Overall, I think it's a mascara that's worth purchasing if you're after something to give you some va-va-voom and don't generally worry about mascara clumping your lashes. That being said, if you're a Beauty Padawan who isn't exactly skilled in the way of mascara -- or if your lashes are prone to clumping -- then you may want to think about giving this one a miss.

Would you buy this mascara?