I don't think I've posted such a large haul in a while, but don't be alarmed -- I didn't splash all this cash at once! It's been collected up over the last few weeks, where I'd go out and buy things, plan a haul post but never get around it. I know, I'm about as organised as Anne Hathaway at the beginning of The Devil Wears Prada.

I feel like I really like this particular haul -- I can't really explain why except that perhaps it's because I've included a couple of new brands into my collection, such as Australis, an Australian drugstore brand that I've previously avoided because... y'know, cheap makeup here usually means dodgy makeup, and I'd rather spend money on a reliable quality product. However, after seeing some of the reviews floating around, I figure I may as well give them a go -- and when they were on sale for 30% off, why not?

So, without much further ado, here is my latest drugstore haul! 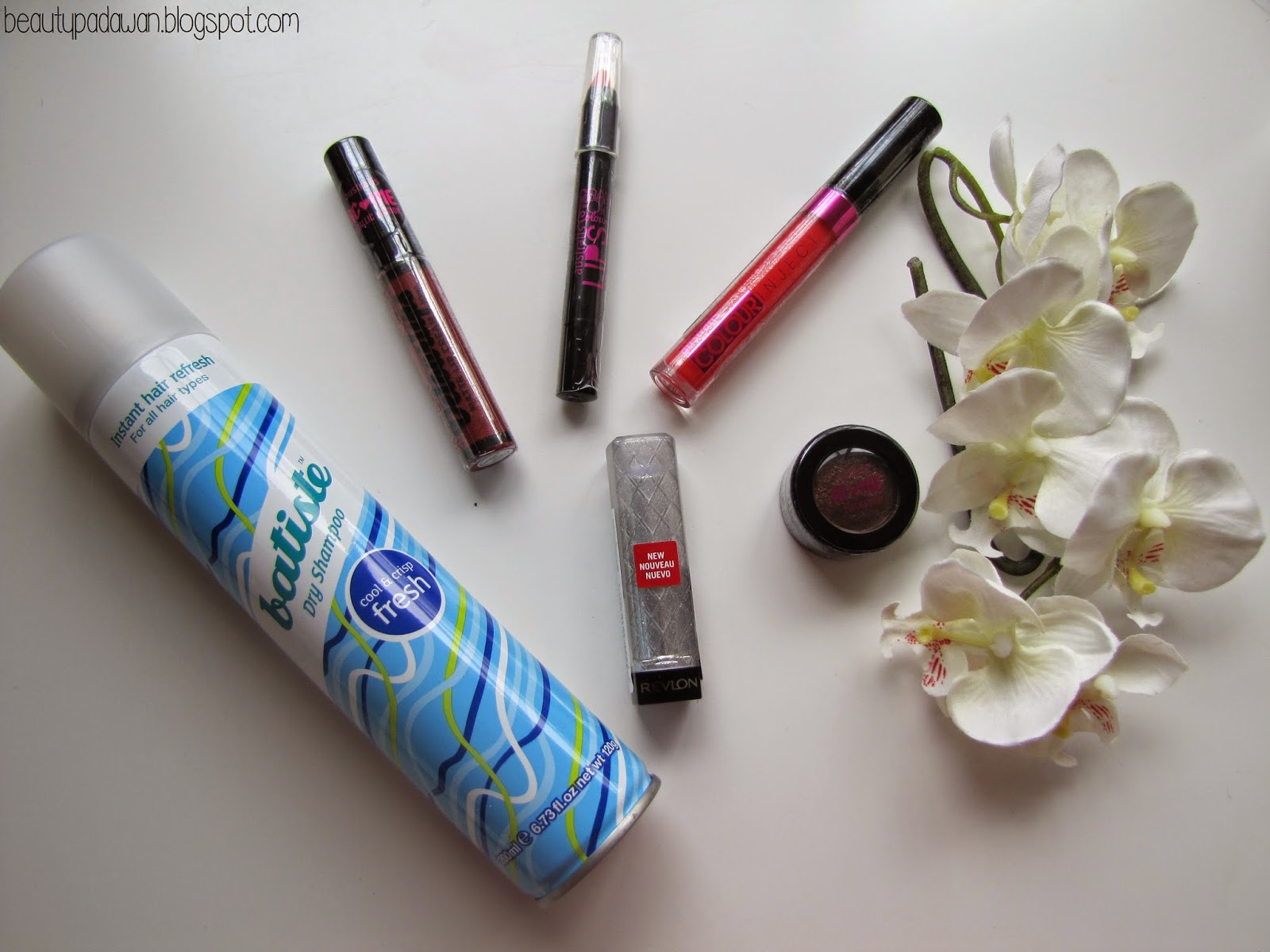 Batiste Dry Shampoo in "Cool & Crisp Fresh" || You may remember from my Empties post that I recently used up a Batiste dry shampoo: meet its replacement. I like this because of the scent -- not that I didn't like Floral & Flirty, but I wanted something different, and everything else was tropical-scented. The only tropical thing I don't abhor is tropical weather.

Australis AC/ME Velourlips Matte Lip Cream in "Grandmaster Pash" || This is from the new AC/ME limited edition line from Australia, which seems to be influenced by musicians -- I can't say I know what Grandmaster Pash comes from, though. This was the nicest of the three new shades: a bit of a deep yet natural red (if such a thing is possible). I haven't tried it out yet; I'm waiting for my lips to be in tip-top condition!

Australis Cray For Colour Lip Gloss in "Twisting Roses" || This basically looks like an orangey-red lip crayon. I'm hoping its opacity is good, considering the name, but time will tell!

Australis Colour Inject Mineral Lip Gloss in "Fandango" || Remember that Rimmel lipgloss I use occasionally (such as here), which I feel bad about using because I don't know the shade name and you can't seem to get it anymore? Well, this looks relatively similar, so I'm hoping it might make a good dupe.

Australis AC/ME Eyeshadow in "Plum Diddy" || This is a cream eye shadow that looks like it has the texture of the Maybelline Color Tattoos, but feels a bit creamier, especially the more you touch it in the pot. I have actually used this once or twice, and so far I like it. I feel that the best application is with the fingers -- I don't know what it is with me and cream products, but I can never get a brush to work as well.

Revlon Lip Butter in "Provocative" || IT'S ANOTHER ONE, GUYS. ANOTHER WEIRD REVLON LIPSTICK. You may remember from this haul that I found an Elsa-freakin'-blue lipstick a while ago, and thought it might've been a one-off freak occurrence, because it was months before I saw it again. When I did, I also noticed this lipstick, which seems to be along a similar vein. It looks to be a very sheer lilac colour, but I want to test it out more thoroughly. Like Elsa-freakin'-blue Invite Only, this doesn't appear on the Lip Butter page. 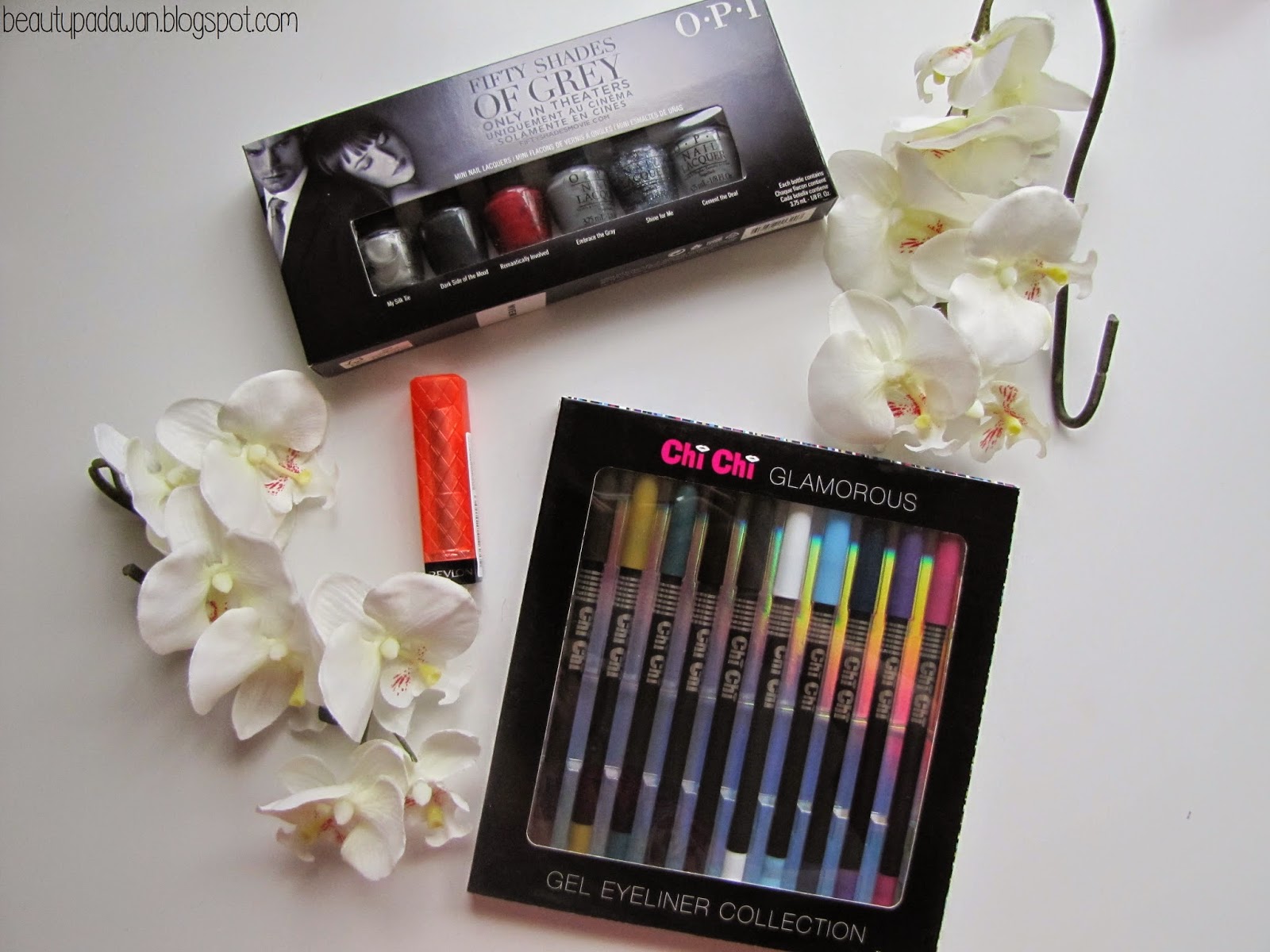 OPI Fifty Shades of Grey Mini Nail Lacquer Set || Let's get real now: I haven't read Fifty Shades of Grey, nor have I seen the movie, but the nail polishes? Heck yeah! I did think about buying full-size ones, but with the $20ea price tag in mind, I didn't really want to spend so much money on polishes that I wasn't totally sure I wanted -- especially when so many of them are grey. This set of mini polishes -- containing all six shades: My Silk Tie, Romantically Involved, Dark Side of the Mood, Shine For Me, Cement the Deal, and Embrace the Gray -- was a perfect idea (and they're so cute!), because I'll get to try them all!

Revlon Lip Butter in "Tutti Frutti" || I found this in the discount section at Myer and thought, "Hey, why not?" It's an orangey colour, which normally wouldn't be my thing because it warms up my skin like it wants to bath it in the sun, but I'm all about trying new colours lately!

Chi Chi Glamorous Gel Eyeliner Collection || I found this at Myer and snapped it up, having wanted to try a heap of Chi Chi's eyeliners for a while. Trouble is, I think they were a Christmas item, because I can't find them on the Chi Chi website -- however it is on the Myer website, so this might your last chance to grab one! This collection features a range of colourful eyeliners that claim to be long-lasting and smudgeproof -- but time will tell! 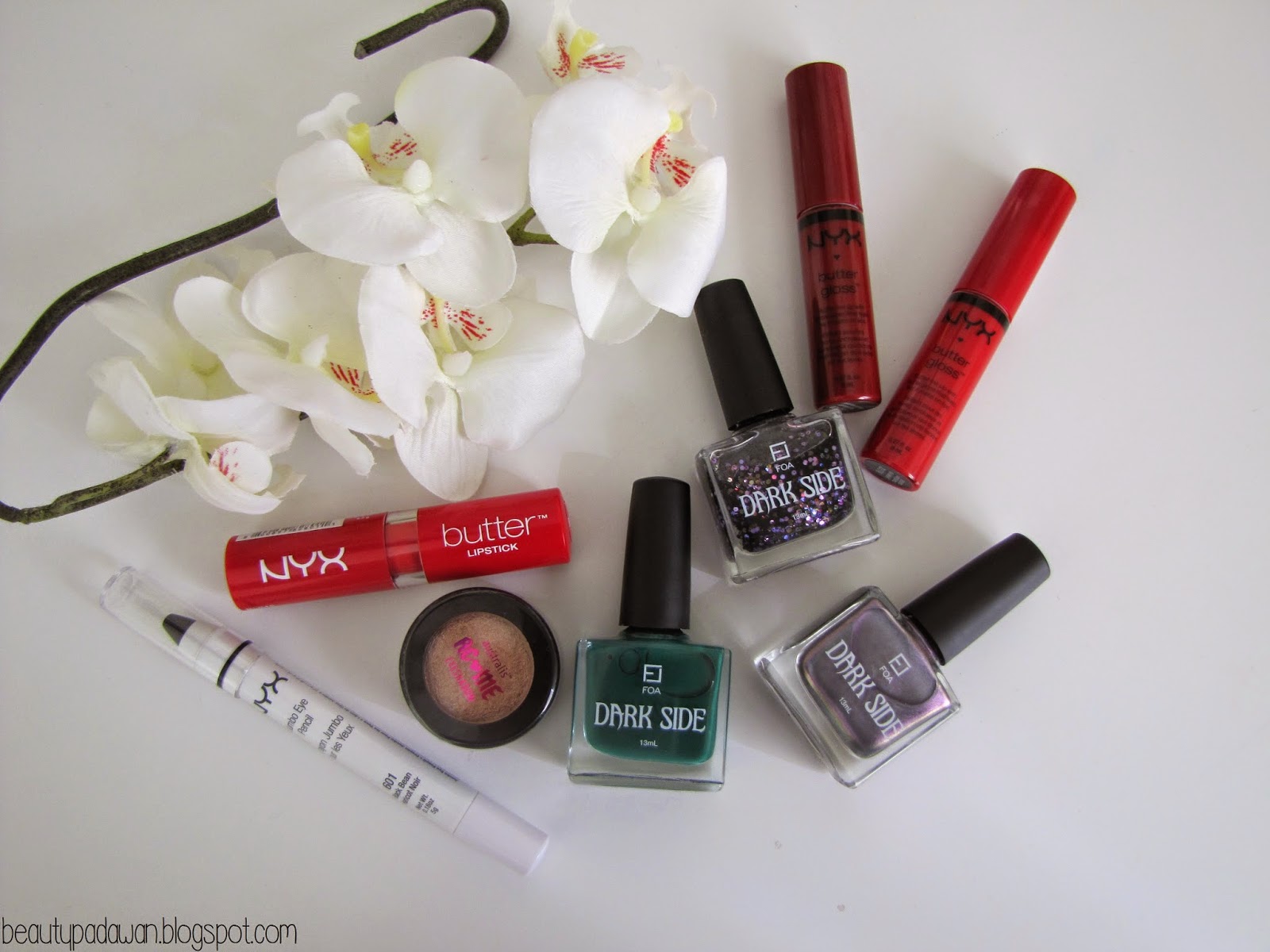 NYX Jumbo Eye Pencil in "Black Bean" || I've seen a few blog posts that have called for a black shadow stick to darken powder shadows, but I never had one (I don't even know what I used instead!). I bought this from Target for that exact reason.

NYX Butter Lipstick in "Juju" || Seeing as Target was having, I think, 40% off NYX I figured I may as well buy myself one of their lipsticks, too. While they stocked a number of ranges, many of the lipsticks were sold out, so it was difficult finding a colour I liked. I eventually settled on Juju, a bright red colour that seems to wear nicely. On first impressions, I don't know that it applies as evenly as other lipsticks, but I need to give it a more thorough testing.

Australis AC/ME Eye Shadow in "Bronzonce" || How does one pronounce the name "Bronzonce"? The girl at the Priceline I found it at said "bron-zons" -- I say "bron-zon-say". After all, I'm pretty sure it's meant to mimic Beyoncé. It's a really nice gold cream shadow that applies really well with your finger (and less well if you're like me and using a brush with the skill of a camel). I need to test it out more thoroughly, but it seems to last pretty well all day.

Face of Australia Dark Side Nail Polish in "Wicked Witch of the West" (discontinued) || I hate posting about things that are discontinued, but I never thought that I'd see these nail polishes again, so I snapped them up! This is from the line Face of Australia had last year about movie villains; I managed to get four of them last year when they started to disappear, but I didn't think I'd ever see these ones again. I was at a random Priceline and saw the girl marking these down to a couple of dollars each, so I jumped at the chance! This is a really nice deep green -- I don't think I'd call it the exact colour of the Wicked Witch, but then it has been a while since I saw The Wizard of Oz.

Face of Australia Dark Side Nail Polish in "Darth Vader" (discontinued) || This best works as a glittery top coat, layered on top of another colour to give it a dark edge.

Face of Australia Dark Side Nail Polish in "Magneto" (discontinued) || This is a kind of grey duo chrome colour (I think) that I'm still trying to work the kinks out of. It doesn't seem to apply as evenly as other polishes from the line, but it's still a pretty neat colour.

NYX Butter Gloss in "Red Velvet" || After Amy brought me back a Butter Gloss from Indonesia, how could I not get a couple more? I was a bit stuck for colours, because there weren't many left, but "Red Velvet" looks like a nice, deep red shade.

NYX Butter Gloss in "Cherry Pie" || By comparison, "Cherry Pie" looks much brighter and cleaner. I can't wait to give these all a proper test drive! 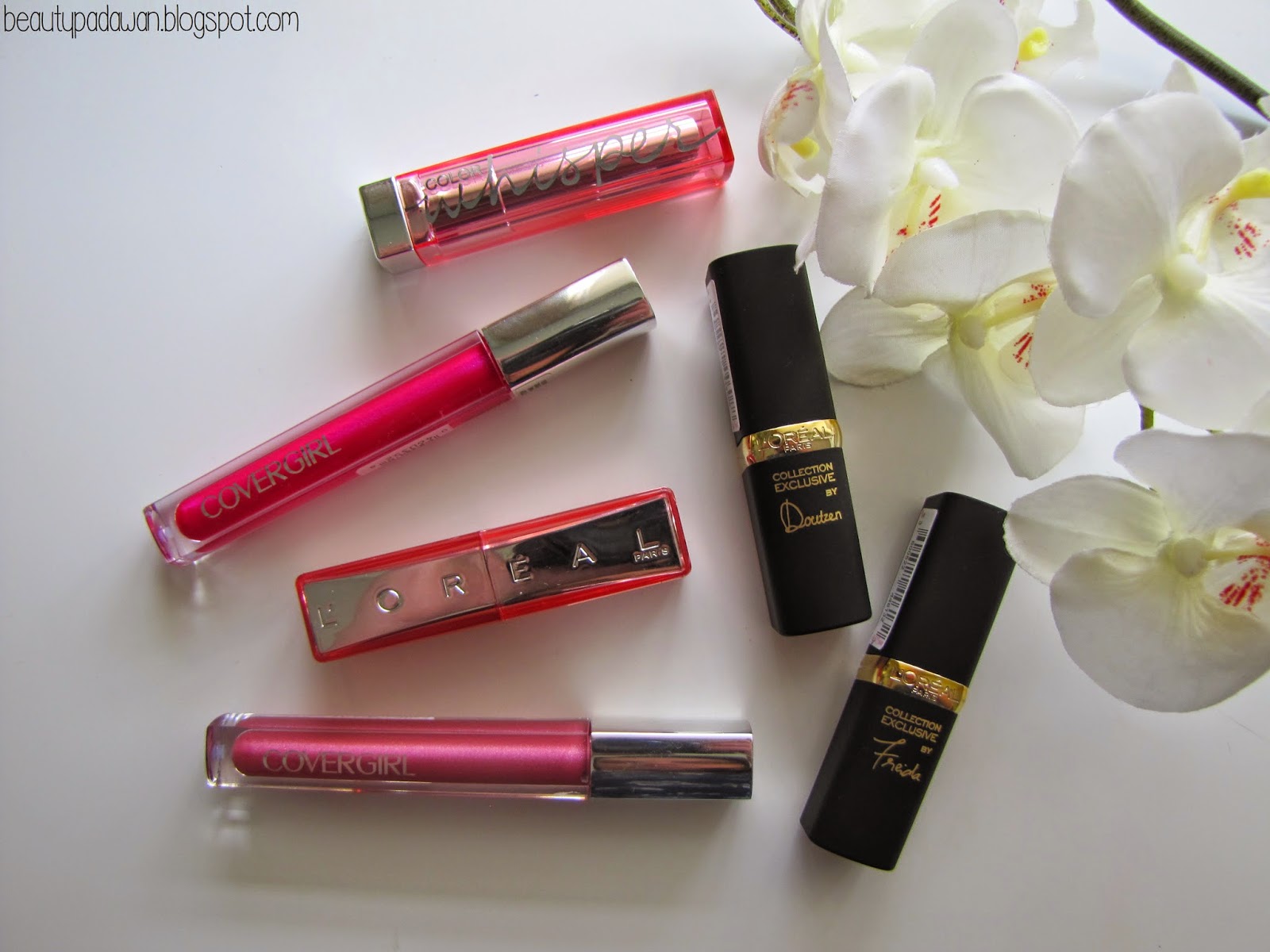 Maybelline Color Whisper in "One Size Fits Pearl" || I found this for an insanely cheap price at Woolworths -- they were getting rid of them, possibly to make way for the new Color Drama lip pencils. This doesn't really seem to have much colour to it, but I've only tried it once so far.

CoverGirl Colorlicious Lipgloss in "Fruitylicious" || Woo hoo, a new lip line from CoverGirl! These lipglosses came out in the last couple of weeks, and Priceline were having a 'Buy 1 Get 1 Free' offer -- so I snapped a couple up! I haven't tried this shade out yet, but I'm really hoping it's a serious hot pink.

L'Oreal Paris NutriShine Lipstick in "Strawberry Juice" || Priceline was also having a 'Buy 1 Get 1 Free' sale on all L'Oreal Paris lipsticks and nail polishes, so while hunting for the new nudes collection, I picked this up! It's a red on the more sheer side (so, great for those who don't think they can pull off the full-on Margot-Robbie-at-the-Oscars look). It lasted for a couple of hours before leaving a pinkish-red stain on my lips.

CoverGirl Colorlicious Lipgloss in "Juicy Fruit" || This colour is a delightfully gorgeous pink nude. I love it.

L'Oreal Paris Collection Exclusive Nudes in "Hint of Pink by Doutzen" || With Priceline having a Buy 1 Get 1 Free sale, this line of lipsticks was first on my mind! I don't care if it's not supposed to suit me, I'LL WEAR IT ANYWAY. I bought this with a lipstick for my mother (because why not?) and it's definitely the lightest pink I've ever gotten. It's going to take a little getting used to but I am going to make it work. Just watch.

L'Oreal Paris Collection Exclusive Nudes in "Mauve Tint by Frieda" || This is the one I bought with the NutriShine lipstick (it was the only one there!) and, to my surprise, it looks really nice! I thought it might look too old on me, but it's sheer enough that it does make it look really natural. I love this lipstick.

That's it for this rather large haul -- I hope that I don't have to post any others for a little while! Do you have any of these products in your collection? What are your thoughts? I'm really excited to play with all of them, so I'll hopefully be able to crack out a couple of extra reviews in March!