"What the eff?" I hear you cry. "It is March 31st, and you've only gotten your February Bellabox now?!" Now watch me laugh with hearty embarrassment as I simultaneously mumble through an explanation about how I put it in a drawer for safekeeping and then promptly forgot about it.

(To be fair, I haven't received my March Bellabox -- although it's on its way -- so I didn't have a new box to remind me about this one.)

I received an email from Bellabox shortly after getting my January box that the February edition was going to be a collaboration with three different magazines, and all subscribers had the opportunity to get one of these boxes! The options were Elle, Cosmopolitan and Harper's Bazaar, and while I don't read any of those magazines, I decided based on the vague descriptions given by each editor that Elle might be the best one for me. 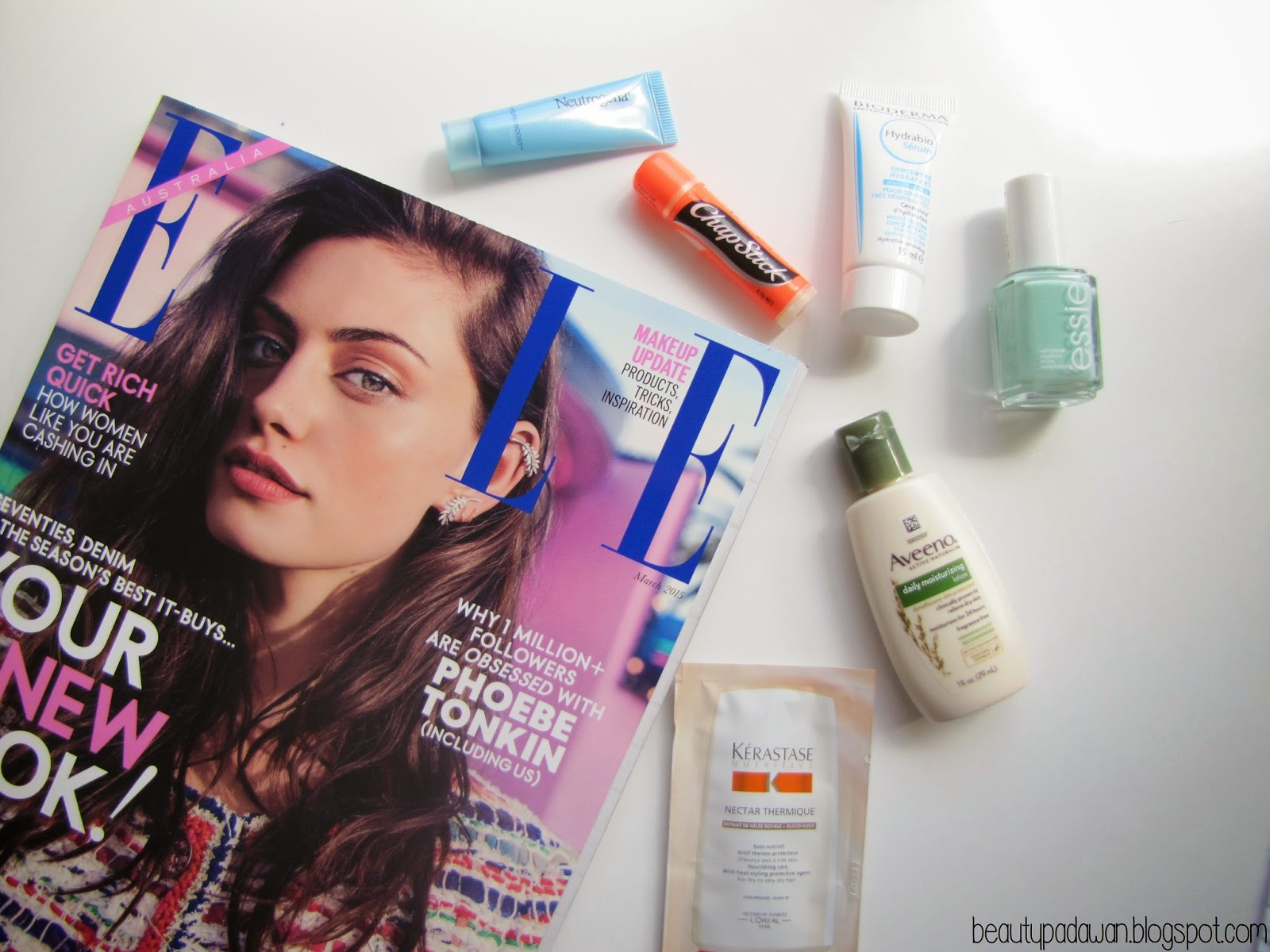 I'm not gonna lie, when I originally opened up this box, I wasn't blown away. I flicked through the magazine, but it really wasn't for me. The nail polish looked kinda neat, and the brand themselves seemed interesting, but one of the reasons why I think I forgot to post about the box was precisely because it didn't excited me.

Then, recently, I was watching some old YouTube videos and one of them was about a winter skincare routine -- and then it hit me: the February Bellabox was actually all about hydration. It wasn't something that especially drew me in, but I think these products will be great for the winter months, especially as the months become colder than the Ice Age.

The boxes were sent out based on when the magazine hit the stands; Elle was one of the last ones to come out, but I still received it about a week before February ended. Let's look at what I received in my box!

Elle Magazine March 2015 || Honestly not my cup of tea. I had a look through but nothing in there really interests me. I'm not really a magazine kind of person, so I'm not too surprised. Elle retails for $8.50.

Neutrogena Hydro Boost Water Gel || I've heard that this is an excellent product for keeping dry skin hydrated. I do not have dry skin. My skin can be oilier than an oil spill in the Atlantic. Even so, I do like how it feels on my skin, especially after I've washed my face. I feel like it's a light moisturiser -- it's not heavy or creamy, and, most importantly, it lets my skin feel like skin. I also kinda like how it smells like my childhood summers, which was basically slip-slop-slapping on sunscreen before jumping into the pool. It is something that I will seriously consider buying in the future, after I finish up the moisturisers I already have. I got a 5g tube of this, and 50g jar is $24.99, making the tube worth $2.49.

Chapstick Natural Papaw Lip Balm || This is a product that I'm disappointed in. If you'd given me this and told me it was a 50c knock-off from the market, I'd believe you. The packaging looks cheap and tacky, plus it neither looks nor smells particularly special. It doesn't necessarily feel bad on my lips, but neither do I think that it does the greatest job at moisturising my lips -- the original Chapstick does a better job, and I still generally prefer Maybelline's Baby Lips. I will continue to use this, but I won't purchase another; then again, I haven't yet seen it for sale online anywhere... This full-size Chapstick is $4.69.

Bioderma Hydrabio Sérum Concentré Hydratant || This product is said to be for "sensitive very dehydrated skin". My skin isn't sensitive but given that I drink almost next to no water, I'm sure it also isn't hydrated. Just a dab of this goes a long way, and it sinks into my skin relatively quickly. I haven't decided yet just how much I like it, but hopefully with regular use I'll be able to tell if it's something worth buying. I got a 15ml tube worth a massive $16.12 (according to my dubious math skills).

Essie Nail Lacquer in "Fashion Playground" || I really like this shade. It's a wintery mint green with a very faint metallic sparkle to it. It can apply unevenly and with some streakiness, but three coats usually gives me complete opaque coverage. I feel like I'll likely bust this out a lot in the winter. Essie nail polishes are $16.95.

Aveeno Daily Moisturising Lotion || I'll just come right out and say this: I'm not a fan. I've tried this on my legs a couple of times, but I don't really feel like it does anything. I don't even know that I'd ever get into the habit of putting anything on my legs (so much work, y'know?), but if I did, I feel like I might want something slightly heavier. I also don't like the feel of it on my legs; I do like my skin to just feel like skin, but I don't really get that from this moisturiser. I got a 29ml tube of this, worth about $1.63 or so.

Kérastase Nutritive Nectar Thermique || This seems like the kind of product you get from a hair salon, because I can't seem to find it online for purchase anywhere. Originally, I was underwhelmed, as moisturising hair products usually turn my hair into a big, fluffy mane -- no thanks. However, this is supposed to be a very good leave-in heat protectant, and that's something I think I might get some use out of, especially as I've started to think about curling my hair again. I got a 10ml sachet of this, but I don't know how much it would be worth. These brands usually run about the $30 mark or so per bottle.

That's what was in my February Bellabox! The March Bellabox hasn't arrived yet, but I received an email from the company a few days ago saying there'd been an unexpected delay. The email also said that we'd get to choose a bonus product for our April box, which I think has the potential to be very interesting if Bellabox plays it right.

Did you receive the February Bellabox? Which of these products are your favourite?