Is it weird that I've blogged for almost a year and yet have never posted an empties post? Maybe it is, maybe it isn't. I have the tendency to throw something away as soon as I've finished it up, however over the last few months I've tried to keep a few things aside to blog about them! It hasn't quite worked -- I managed to save a few things, but twice I've cleaned out my bathroom cupboards and thrown some old stuff away, completely forgetting that I could've held onto them for this post!

Anyway, here are a few things that I've used up over the last few months and have, mostly likely, made repurchases of. 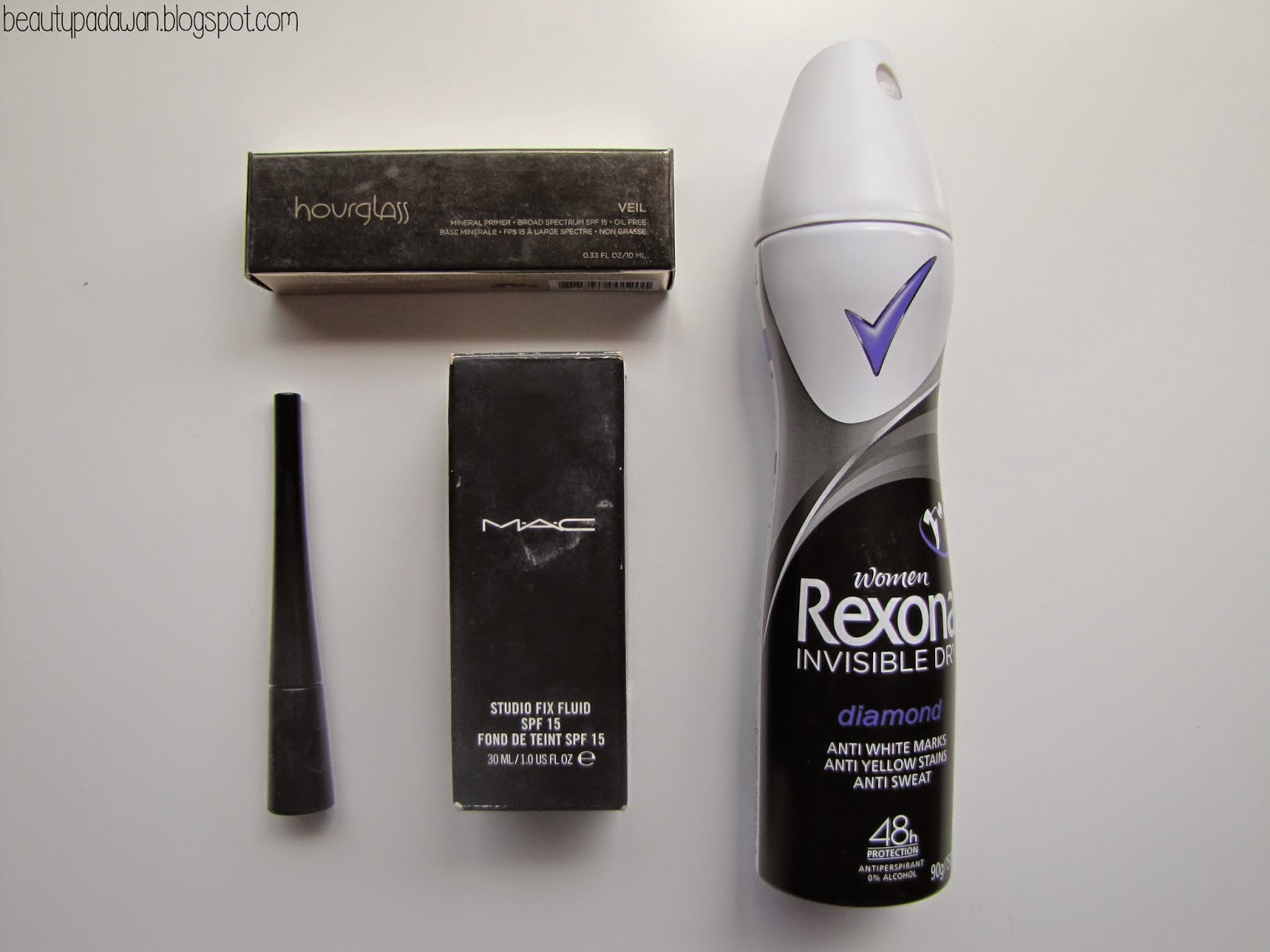 Hourglass Veil Mineral Primer || Oddly enough, I've never been the biggest fan of this primer. A lot of people rave about it, and while I concede it to be good, it's never blown me out of the water. I've bought a replacement of this primer, because it does help my makeup last a bit longer.

Maybelline Hyper Glossy Liquid Liner || My favourite eye liner in the whole world, used up at last! I actually used this up a while ago and bought a replacement immediately. There was a short period of time where I stopped using and went back to gel liner for a bit, but nothing can replace this liner in my collection!

MAC Studio Fix Fluid SPF15 Foundation in "NW20" || I used this one up a while ago too, but I haven't yet bought a replacement. I want to, but 1) MAC foundation isn't cheap, and 2) my nearest MAC counter is in the city -- so, y'know, not easy on my wallet and not in walking distance. I really like this foundation, and I do want to buy another, but sometimes I've been slightly paranoid that it's a little too orange. It's most likely just me, we all know how my mind works.

Rexona Women Invisible Dry Diamond Deodorant || While it's not a bad deodorant, I can't say it's the best I've ever used. It does alright in terms of yellow marks, but white marks on dark clothes can be something of a different matter (ironic, I know). Looks like I need to keep shopping around!

Batiste Dry Shampoo 200ml in "Floral & Flirty" (not pictured) || I'm very fond of this dry shampoo for keeping my roots looking fresh if I'm starting to push it with how long I go without washing my hair. It smells nice and doesn't leave any white marks unless I decide to overload my hair with it -- and I honestly find that I don't need to.

That's it for my first-ever empties post! Let's get real, I probably won't have another one for a while, but I will try to keep a hold on stuff as I finish them. I feel kind of odd to be in this sort of predicament -- I'm usually something of a hoarder!

Tell me all about the things that you have used up recently!