Without a doubt, December has been absolutely the craziest month for blogging I've ever experienced. I made the decision to partake in Blogmas because it sounded like a whole heap of challenging fun -- until I burned through my backlog of posts and was up to 10pm or 11pm each night putting the finishing touches on poems. In hindsight, it really wasn't the wisest decision, but nevertheless I'm glad I did it. Would I do it again? Right now, I'm saying no -- but I have a whole year to forget just how under the pump I was and decide to do it all over again.

I wasn't sure if I ought to do a round-up for the past month, as a lot of other bloggers have simply round-up the whole year; I will have a round-up for 2014 coming, but I'm only going to feature a few posts from each month, so it'll be more concise. 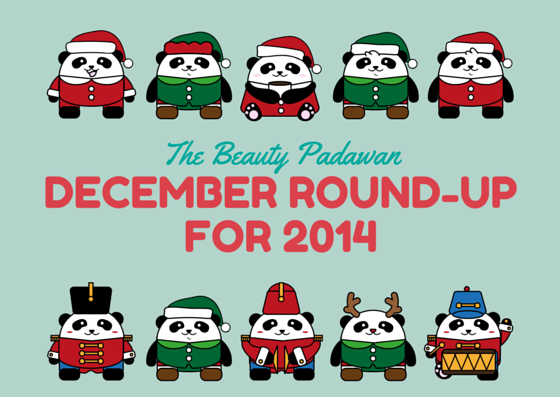 On Diary of a Beauty Padawan, December began with a round-up of November, which was, as most round-ups are, a brief summary of what I'd blogged about the month before.

Then began Blogmas. Day 1 was basically a cheat post, with a brief explanation as to what it was -- back then, I had such high hopes for completing it! Day 2 saw my fifth drugstore haul from Priceline, with several little goodies that I got with a few vouchers. Huzzah for saving money! Day 3 was home to the Me-Time Tag, where I talked a little about what I like to do to relax when I have more time off than I usually do; then was a pink and purple daytime look, which I at first used the Too Faced Chocolate Bar palette to do, but then switched to the I ♡ Makeup I Heart Chocolate palette, which I felt was much better suited.

I followed that "tutorial-ish" with a review of the I Heart Chocolate palette, which really is a great palette to have if you're on a budget and don't want to fork out for a Chocolate Bar -- the shades are comparable but not always identical. For something a little different, I followed it up with a post on my ten favourite Australian productions, with some honourable mentions for those that are popular but haven't made their way onto my laptop screen yet. Onto Day 7, and I posted my third Crave & Covet list, which contains more nail polish, lipstick and eye shadow than my collection really needs.

I followed that up with a review of the #Selfie palette from I ♡ Makeup, a little item that I had to pick up because, like them or not, selfies look like they're here to stay. It also contains ALL the hashtags! On the 9th day of Blogmas, I posted a review of the Mecca Cosmetica Ready Set Quick Dry Nail Mist; it's an interesting little product that promises to give you touchable dry nails in under a minute -- but does it?

This blog wouldn't be this blog if I didn't have an incredibly late post related to something that happened a while ago -- and in this case it was an unboxing of Mecca's Beauty Loop box, a little something that comes out every few months as a way of saying thank you for spending your life savings. As if to make up for the three-month delay, I then posted another unboxing of the summer edition of the Parcel by Marie Claire -- also known as, in my opinion, one of the greatest Australian beauty boxes on our shores, especially if you're the kind who doesn't buy everything the minute it comes out.

On Instagram, I'd been participating in the More Than Adored #mtaphotoaday challenge, and so here I posted about the first ten days of that challenge, which was really quite fun. Of course, where I lapsed in blogging, I also lapsed in the photo challenge -- but at least with that it'll be easy to catch up! Then came one of my favourite kind of posts to do: a tag! I haven't really felt the Christmas spirit this year, but I nevertheless felt myself obliged to do the Christmas tag, which is where you'll want to head if you're interested in knowing some of my family traditions or crazy presents I wanted as a kid.

Have I mentioned that I sometimes post late posts? This was truly the latest of them all -- in August I was nominated for a second Liebster Award by Karin of Karin J R, and on the 14th day of Blogmas, I finally got around to posting it! It's got some fun facts, plus some interesting questions -- and I like to think mine are a little exciting too. I followed that with one of my most frequently viewed posts ever: a comparative post of the Too Faced Chocolate Bar palette and the I ♡ Makeup I Heart Chocolate palette. If you've ever tossed up between the two, I tried my best to take everything into consideration when comparing them, so you can properly choose whichever one you prefer.

I may have mentioned once or twice that I enjoy a good tag post, and that's no different with the Wishes tag, a small one about the past, the present and the future. Arguably the most fun I had with a post ever, I then posted my extensive lipstick collection (which has since grown -- WHY, SARAH?), which has products from MAC, Rimmel, Elizabeth Arden, Maybelline, and many others. Day 18 had a FOTD that I'd had sitting in my drafts folder since the extinction of the pterosaurs, mimicking a really simple look that Jena Malone has in her merchandise photos for The Shoe.

My penultimate post was another one that I enjoyed writing -- all about my mascara collection! I think I have something of an addiction to mascara, even if it doesn't look that way when put next to my lipstick collection. To make sorting them all easier, I categorised them all into groups such as Angelina Jolie, Rosamund Pike, and Rubbish. Last, but not least, was a quick list of my favourite "Christmas" films, by which I mean films that aren't about Christmas but are somehow considered Christmas films anyway. To even it out, I also listed my Top 3 favourite films that are actually about Christmas.

That's it for the round-up of December; keep an eye out for my 2014 round-up, which will be a selection of my favourite posts throughout the year!

What did you get up to in December?

Email ThisBlogThis!Share to TwitterShare to FacebookShare to Pinterest
Labels: about the blog, beauty, Blogmas, Compare the Pair, fotd, haul, lifestyle, tutorial-ish, unboxing, You're It!