A little while ago, I was approached by Carlie from Maskd and was asked if I'd like to try out The Green Mask. Although it's not a regular feature of my already questionable skincare routine, I do enjoy busting out a mask every now and again, especially if my skin is experiencing some turbulence. The Green Mask is currently the only product available by Maskd, but I have heard (see also: I asked like a nosy parker) that they're working on some new products with a tentative launch date of 2016.

I feel that the main selling point for this product is that it is made entirely of natural Australian ingredients. I'm not talking about things like "unsanctified woodbark from a 5000-year-old didgeridoo" or "extract of Victoria Bitter" (which, by the way, would be terrible), but stuff that wasn't first created in a science lab, such as stearic acid, which is naturally found in sugar cane, and malic acid, which is found in apples and pears. Maskd is clear about what is in The Green Mask, providing a list of ingredients when you scroll down on the home page. It does note, however, that you shouldn't use it if you're allergic to salicylates. 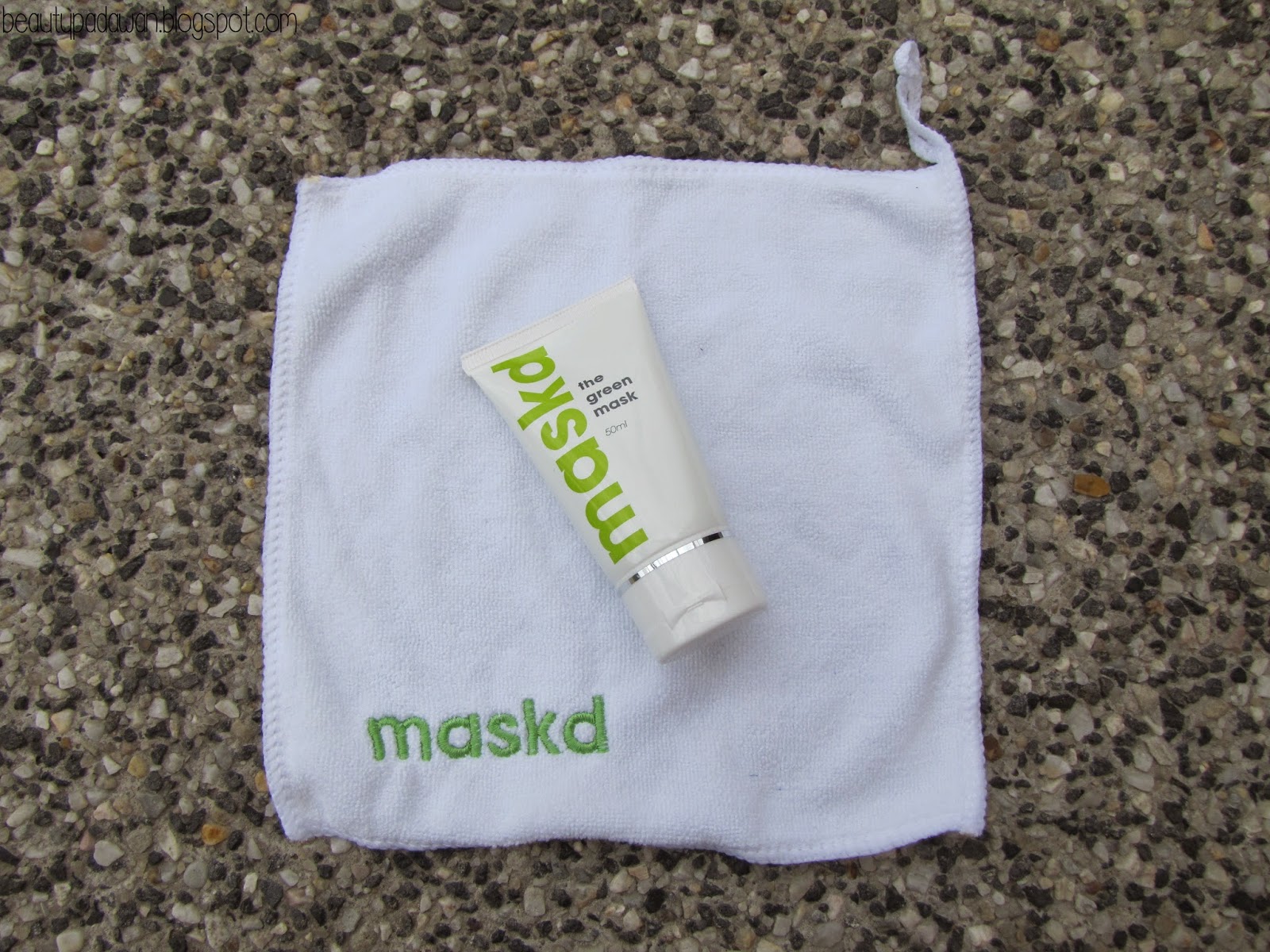 Something that may concern some people is the fact that it contains parabens. A lot of people are anti-paraben because of its purported health risks -- opinions appear to be hotly contested, with many saying that you should avoid parabens altogether, and others saying that the health risks are minimal to the majority of people. Parabens are used as antibacterial preserving agents, so that microbes and other nasty little pests don't start festering in your cosmetics; they are supposedly safer than other antibacterial agents, as they are less likely to cause irritation and don't release formaldehyde. If you're not fussy about parabens, then you won't care at all about anything that I've just written; if, however, you prefer to steer clear, then this product might not be for you. It is worth noting, however, that the parabens in The Green Mask appear at the very bottom of the ingredient list, meaning that it contains a very, very small amount. 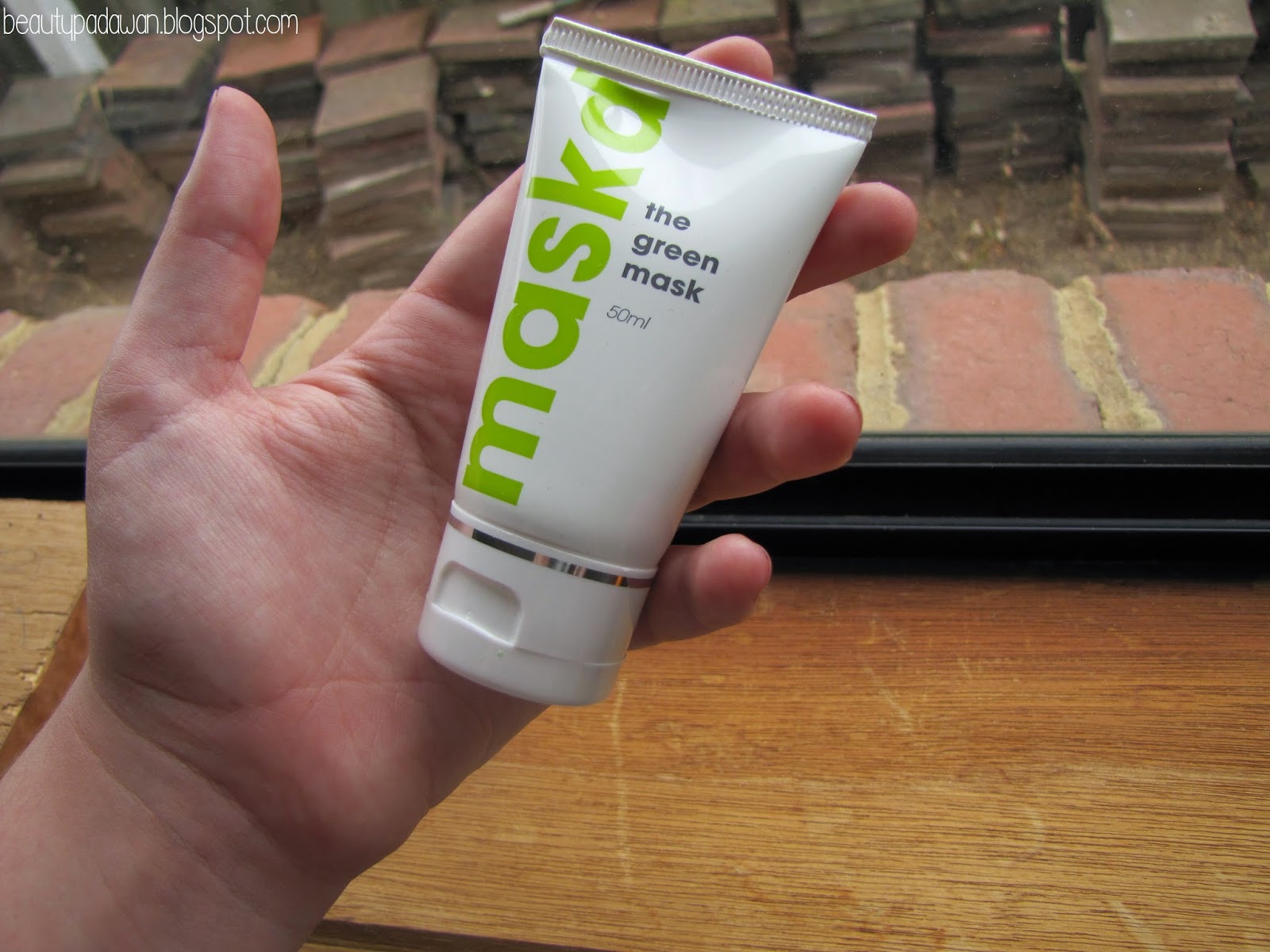 The Green Mask claims to "smooth lines and wrinkles, soothe damaged skin and reduce scarring, permit fresh, glowing skin, allow natural oil flow, moisten dry skin, reduce blemishes, and improve the application of makeup". It also talks about a "sting", which Maskd promotes by asking "Can you handle the sting?" and then stating, for those who might be concerned that they're about to feel the cosmetic equivalent of a bitch slap, that it's actually not that bad. They claim that it varies from person to person and that it lessens each time you use it -- I believe it to be true to an extent, and I'll touch on that a bit later. 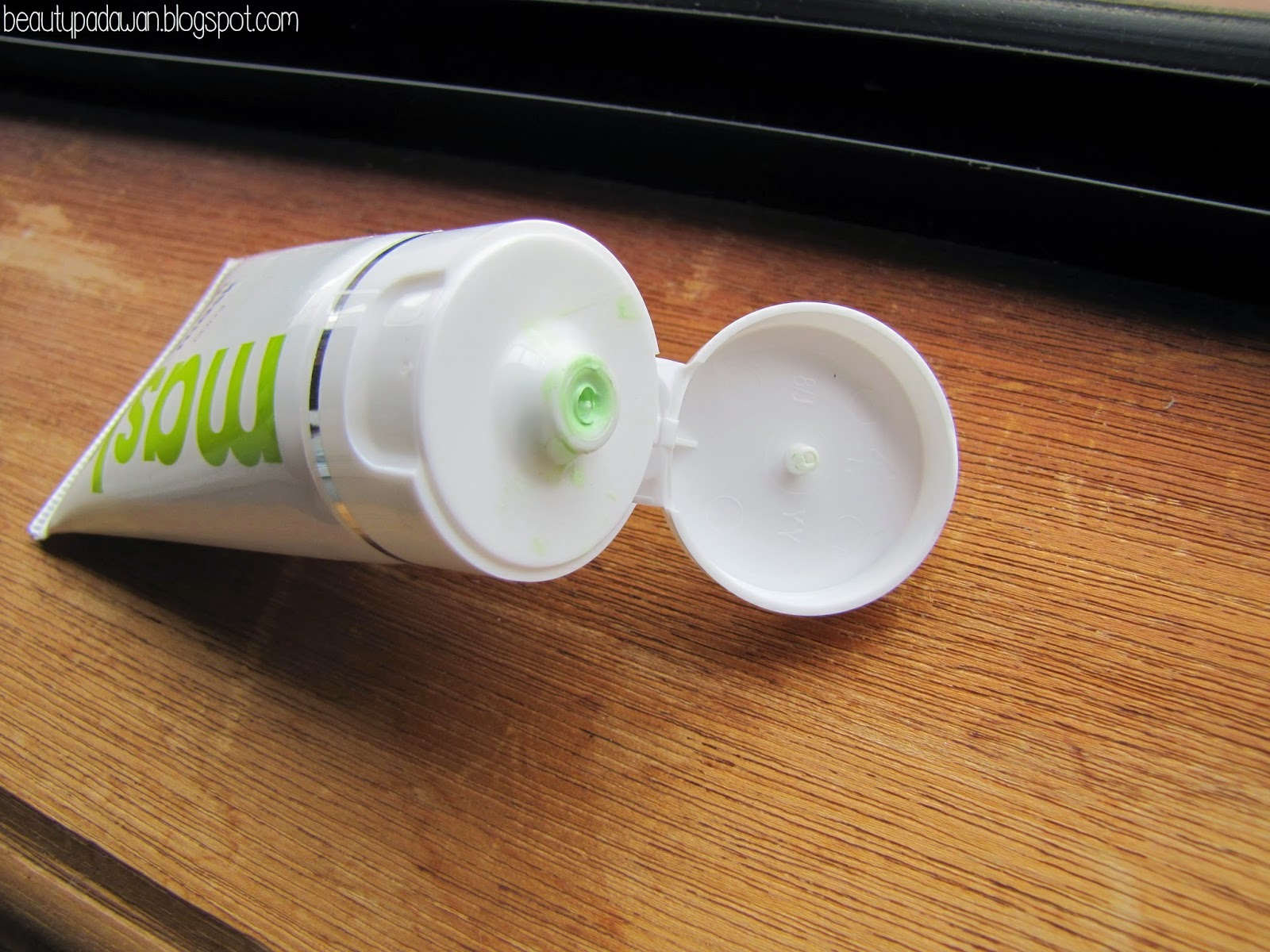 So, using The Green Mask works like this:
As far as application goes, it's obviously very easy. It's not a thick product -- think Glamglow, which is relatively thin, as opposed to Origins, which can be thick and creamy -- so it's easy to spread it thinly across your face, whether you prefer to use your fingers or a flat brush. While the product is definitely green, it doesn't look like you're smooshing an avocado all over your face; it's a pale mint that can sometimes look white, depending on how your lighting is. The scent is similar to menthol or eucalyptus but not quite -- my younger brother and I weren't able to put our fingers on it, and neither was my mum when she tried it.

As far as The Sting goes, the website is more or less dead on. The first time I used it, I felt an almost barely-there burning sensation across my cheeks -- this isn't too surprising, as I can get a bit of congestion there, but it was so light that I was almost disappointed. Where was that sting? To be fair, my skin was in unusually good condition, and my cheeks were better than they had been for a while -- so there wasn't too much for the mask to sting. I tried a thicker layer the second time around, just in case I had been too light, but the result was more or less the same -- a light burning sensation across my cheeks and upper lip. 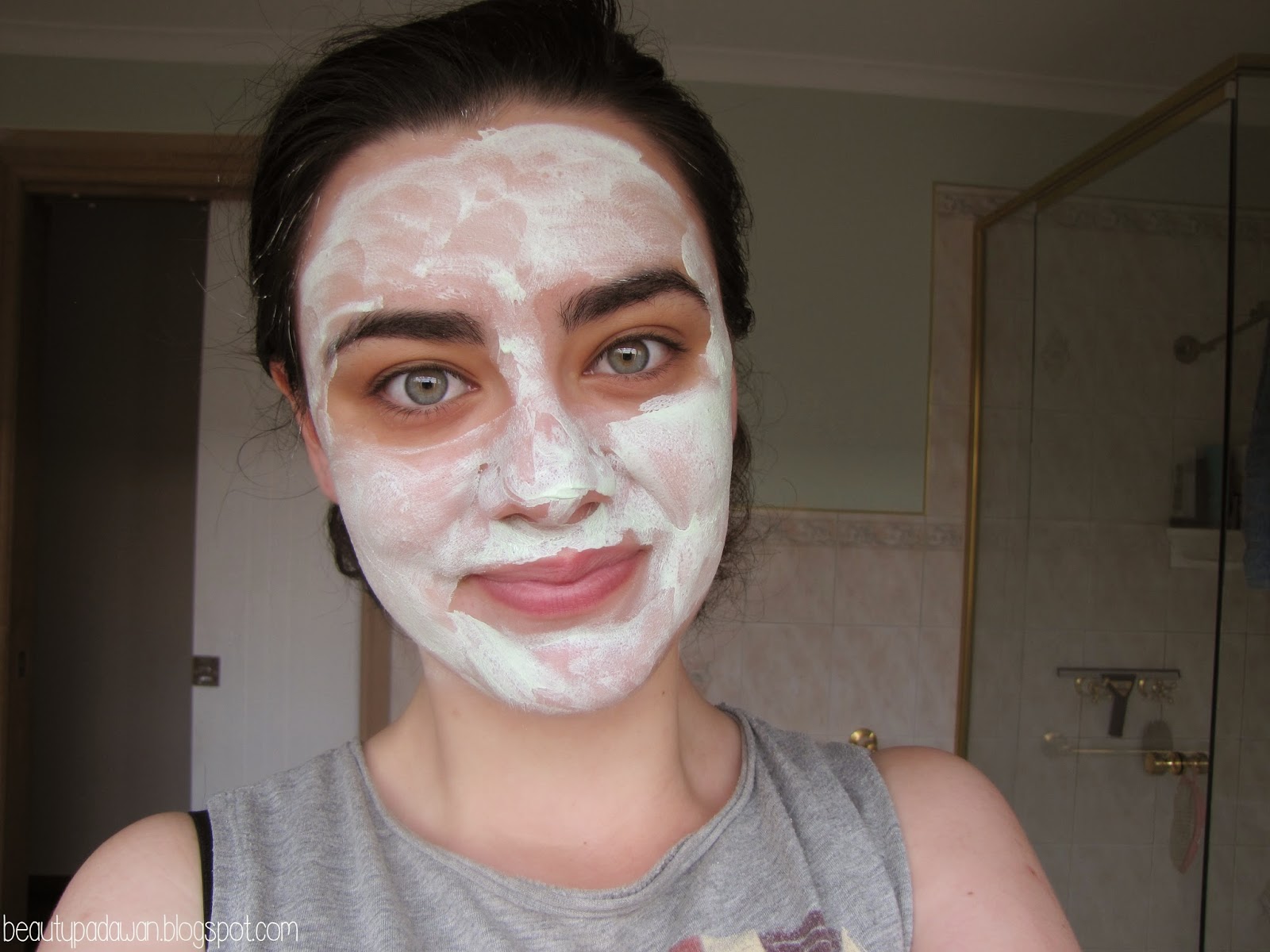 A couple of weeks later, my skin had decided to let a few demons break loose, so I tried it again -- and this time the results were comparatively different. The burning sensation, while not unbearable, was more pronounced and took a little longer to subside than it had the first couple of times. I have to admit, I was quite pleased! There's nothing I like better than knowing I've got skin problems that are being fixed. To see if it was my skin causing it or a random coincidence, I tried it on my younger brother, whose skin is much more problematic than mine. He remarked on a cooling sensation all over his face rather early on, but didn't feel any burning or tingling until a bit later on; my mother, whose skin is practically perfect, felt no cooling, burning or tingling whatsoever.

The Green Mask comes with a cute white fibrecloth for that very purpose -- you wet the cloth, and wipe away the mask! What I was surprised to notice was how much dirt and makeup came off when I did -- of course, your face is supposed to be clean before hand, and I have used a face wash to do so before using the mask, but the cloth still manages to take off traces that it missed. I haven't noticed this as much with other masks.

The first thing I noticed when taking off this product was that my face appeared much cleaner, and my blemishes were slightly less red. The product claims to promote natural oil flow and moisten dry skin -- as someone with oily skin, this isn't a problem that I have, so I was worried that it might cause my skin to go into an oil-producing frenzy and make my face glisten like an oil slick. This wasn't the case. When I normally take a mask off, my skin feels smooth and polished -- but almost unnaturally so, prompting me to occasionally break my innate skincare laziness and apply some moisturiser to make sure no havoc is wreaked overnight. With The Green Mask, what I instead felt was that my skin was smooth and soft -- even though they say to apply moisturiser afterwards, I honestly didn't feel the need to. I don't think I'd felt so impressed with the finish since I first tried GlamGlow. 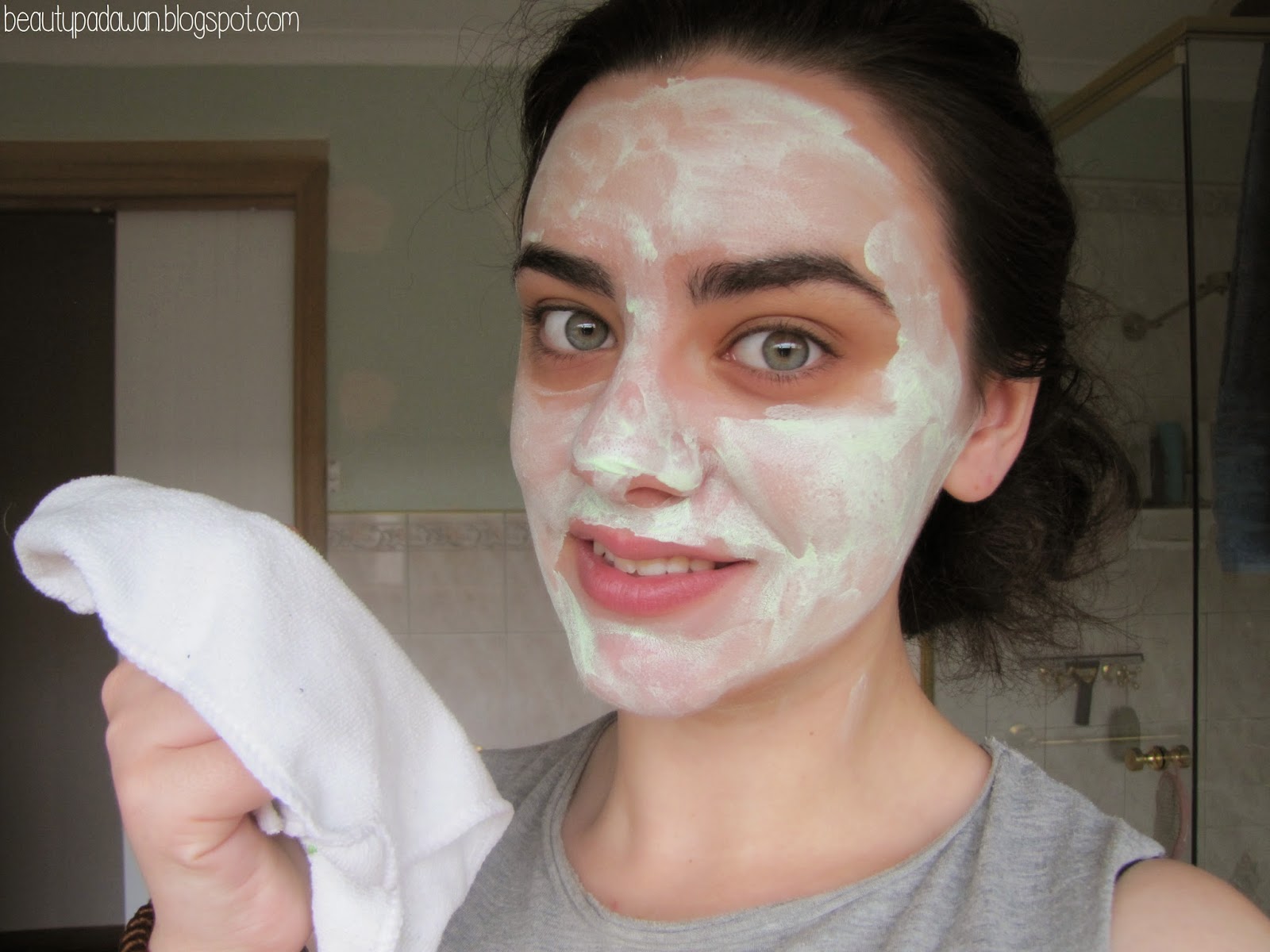 Both my mother and brother remarked that their skin felt smoother, and the reddening on my brother's face had lessened a little. He's not sure that it did too much to improve his skin overall, but sometimes the worst thing about face demons is the redness -- and he's only used it the once. For me, I feel like this is a gentler version of the Origins 10 Minute Mask to Rescue Problem Skin, a product that I love but try not to overuse for fear making my skin dry out. I don't feel like The Green Mask cleared up my blemishes as quickly as the Origins mask, but once it did I did notice that my skin remained clear for longer than normal (#win). My makeup also went on a little easier and lasted a bit longer, something which my mother also experienced after using The Green Mask.

At $49.95 for a 50ml bottle plus $5 flat postage, this product doesn't exactly run cheap -- but then GlamGlow is $75 for a 50g tub (remember when it used to be $95?). I have the Supermud Clearing Treatment, and I feel like The Green Mask is actually a great alternative -- on me, they both achieve the same results. Maskd also hails from Brisbane, so if you're feeling more conscientious about the economy, etc. (of which I personally know very little), you could buy The Green Mask knowing that you're supporting an Australian business. If you're still not sure if you're ready to commit, I do believe you can get a sample sent your way -- Maskd's Facebook page has those details.

I think this is a great product. It'll last me a while, it's Australian made and owned, and it definitely delivers on results. The results will vary from person to person and the sting is subtle enough that I think even those with sensitive skin will be able to handle it like a boss. Would I purchase this for myself? Yeah, I reckon so. I don't usually buy products online because I prefer to protect my bank account go into a store and stare intensely at a product while pestering asking the shop assistant questions, but I think I'd bend my rule here. Sure, it's on the pricey side, but if I'm willing to fork out $60 for a mascara, I'm sure I can save and do the same for a decent face mask such as this.

How much do you enjoy using a mask?

This product was sent to me free of charge for my honest consideration. It's been reviewed in accordance with my Disclaimer Policy, because life's short and I have better things to do with my time than lie.
Posted by Shae Barry at 17:37