What I Got For Christmas: 2016 Edition

I think, for those who celebrate it, Christmas is more or less the same thing: getting together with your family members, eating loads of delicious food, having more fun with everyone than you'd have at any other point in the year, and, at some point, exchanging thoughtful gifts.

Last year I was emanating that Grinch attitude all Christmas season, but this year I really got into the spirit. I found gifts for my family members that I knew they would appreciate, I counted down the days until I could wear a Christmas t-shirt at work, and I eagerly looked forward to piling up my plate with my nanna's roast potatoes and timpana.

Sorry, Mum, but Nanna's timpana really is better than yours. Don't worry, though, because yours is still better than mine.

My family are typically very good at gifting presents, whatever the occasion, and this year was no different. Have a look at what I received, and let me know what you received as well! 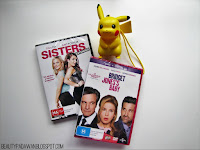 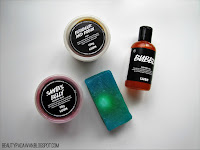 My brothers know how to buy me gifts. It's impossible for them to go wrong with buying me DVDs because they know that it'll be a hit so long as there's at least one actor or actress in it that I like. You'll see Sisters here, starring Amy Poehler and Tina Fey -- I was too busy when it came out to watch it in cinema, so I'm happy to have it on DVD. The same goes for Bridget Jones's Baby -- I was waiting to see it with my best friend, but by the time she was available, it was too late. I love Bridget Jones, and anything with Colin Firth will have me going "YAS!" so it was an easy pick.

You may have noticed an adorable Pikachu chilling nearby. It's actually a portable charger designed to give your phone an additional three hours of battery power with the aid of a couple of AA batteries -- great for if you're in a pinch. It also has a bag strap, so that you can hang it from the zipper of your bag or backpack. I will be absolutely be giving this a try the next time I go Pokémon hunting in the city!

One of my brothers also bought me a Lush gift box! It's hard to go wrong with Lush items for me, because I will use it no matter whether it is for the bath or the shower -- though I tend to bathe more in the wintertime, for my back. This pack with a tub of Reindeer and Robin Fun (whatever "fun" is), Santa's Belly shower jelly (which had unfortunately melted a little!), a bottle of Bubbly shower gel, and a bar of Baked Alaska soap. The soap especially smells amazing for this time of year -- light and citrus-y, it's perfect for the scalding Aussie summertime! 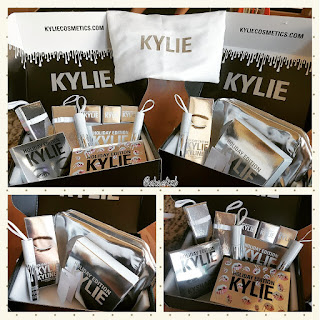 As I opened up the box this was all packed in, I thought my parents had made a relatively large MAC order -- and that in itself would've been huge, because they typically don't like to buy me makeup. When I saw what was inside, I was so surprised that I couldn't breathe for coughing; I needed Ventolin! I was so, so lucky to receive the entire Kylie Cosmetics holiday collection -- I don't have anything from Kylie Cosmetics, so I was beyond thrilled! 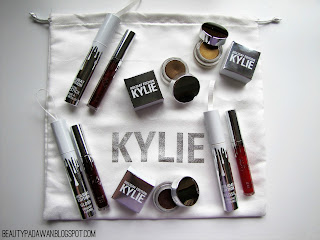 There were three Christmas tree decoration items: a metal liquid lipstick (Dancer), and two glosses (Jolly and Naughty). There were also three crème shadow: Yellow Gold, Camo, and Golden Plum. I haven't tried Dancer or Jolly yet, but Naughty was a really beautiful pink-based red, which faded more into pink as time faded and the gloss wore off. The crème shadows were kind of light and somewhat moussey to the touch -- not super creamy or thick like other crème shadows I've stuck my finger in, and while they're not intensely pigmented to start, you can build them up. 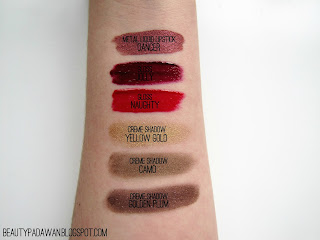 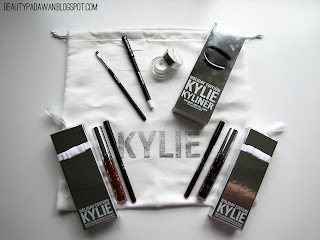 There was a Kyliner kit in the shade Snow, described as a "crisp matte white". I haven't tried the gel liner or the pencil liner yet, but the formula for the latter in particular seems really nice and creamy. There were also two Lip Kits, called Merry and Vixen. I haven't tried either shade yet, but the Vixen lip liner reminds me a little of MAC Currant. 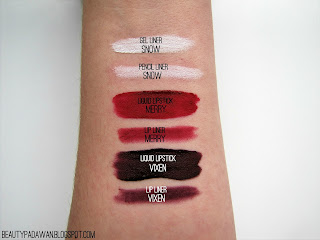 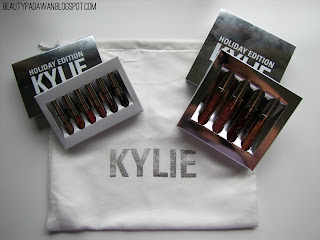 While I haven't yet tried any of the minis, I have worn everything from the four pack excepting Blitzen. Angel is a beautiful nude shade that looked great at work and wore really well throughout my shift, Cupid is a gorgeous pink gloss that really adds something special to the everyday look, and Noël, while looking super gold in the tube, sheers out quite nicely for those who don't want a colour that's "out there". 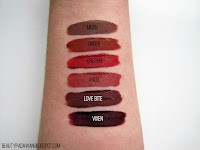 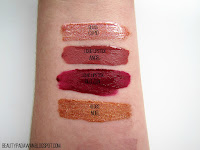 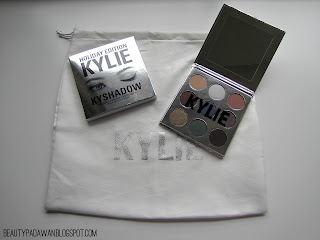 The Holiday Edition Kyshadow palette. I've tested out a few different shades from this so far, and I don't know if all of the Kylie palettes are like this, but... the quality is not great. I expect more from a much hyped brand that chooses to charge almost $50 US for an eyeshadow palette. The swatches might look alright, but Gingerbread -- that nice metallic gold you see -- was the only shade that swatched well on the first swipe. The two mattes in the top row, Sugar Cookie and Chestnut, swatch OK for matte crease shades, but the others were underwhelming.

Even with a primer underneath (at the moment I'm going through MAC Soft Taupe), the application is so-so. The shade Mittens, in particular, was kinda awful. The majority of these shades are definitely helped by the crème shadows, but I feel like it's kind of a cop out to need them when the products are just so expensive. I'm going to keep testing them to see if they work better with different primers, or if they apply better with natural instead of synthetic brushes, but... yeah.

This eyeshadow junkie is kinda disappointed. 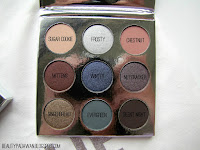 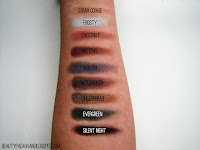 The box also came with a super soft, snow white Kylie sack to pack all your goodies in, as well as a makeup purse with the signature "dripping lips" image. I forgot to take pictures of both!

Lastly, my parents gave me the NYX Liquid Suede Lip Vault -- this one, at least, I knew about, having snapped it up on sale for them. I know, I know, I'm a very considerate daughter.
﻿ This lip vault contains minis of every single shade from NYX's Liquid Suede Cream Lipstick line. As you can see, you've got plenty of safe, traditional shades mixed in with some crazy, crazy colours. From a dusty pink to blinding orange, bright blue to jewel-toned navy -- whatever colour you like, the line has it all!

I'll eventually give every shade a go, but there are a couple there that are either seasonal (that dark, vampy jewel-toned purple ain't no good for this bright, blinding Aussie summer) or just too alternative for me -- I can't see Little Denim Dress being used at all, and I absolutely despise Respect the Pink. 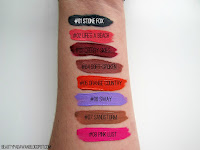 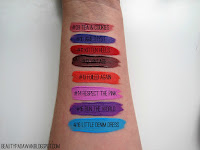 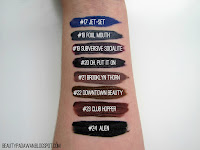 That's it from me for this year! I know I have a couple of other things coming -- one of my brothers bought me all the Sailor Moon POP Vinyls -- because both Sailor Moon and POP Vinyls are LIFE -- but at time of writing they have only just arrived, and I don't want to delay this post any more than it has been delayed already.