A couple of months ago, I went out with some friends to the city for lunch, and when looking for places to go afterwards, I suggested Daiso. Daiso is basically a Japanese $2.80 store -- you can find loads of great things there, from homewares to gardening equipment to makeup.

I didn't have any specific intention of buying anything, particularly as my brother had already been in and I'd asked him to pick me up a couple of things (which, of course, I have included), but it wasn't long before I too was trying to stop myself from piling things into a basket! That's the great/terrible thing about Daiso -- they're such a contrast to the regular $2 shop (which rarely has anything for $2) that once you start seeing things that you like, you just can't rationalise buying nothing at all. 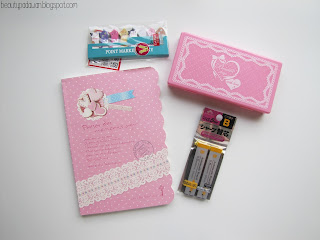 1. Cat Post-It Tabs || Not technically the "Post-It" brand, but that's not important, right? I almost had kittens when I saw these, as they were just the perfect item for a semi-retired cat lady such as myself. They had a nice little variety of animals that you could purchase -- I have a set of frog ones from years ago -- and they're definitely great if you love a little kawaii in your life.

2. Beautiful Days Pink Eyelash Container || This came in a couple of different patterns -- either red or pink, mostly -- but I just love this. It's made of sturdy plastic and opens up to reveal four compartments with removable plastic inserts to put your eyelashes on, as well as a narrow row along the bottom that is great for storing those little bottles of lash glue. I do kind of wish that I'd bought more than one, because I have more than four pairs of lashes (and two are missing, because I never put them away right away) and there was no way of telling from the outside how many would fit. Still, a great storage solution -- just remember to put a little Post-It note under the insert so you know which lashes are which.

3. Pink notebook with French lettering || Okay, this is proof that I have a problem: I do not need any notebooks. I bought three big ones from Typo last year, then cleaned out my room and found a whole drawer full of other notebooks. (I just can't throw notebooks out if there are more than a few empty pages left.) That being said, I have plans to use this while writing my thesis, so it might not be a complete waste.

4. 0.5mm pencil lead || This might seem like such a random thing, but I have this pacer. It's glorious, it's wonderful, it cost me frickin' $4.50 from the university bookshop because I wanted a 50c pencil but it was all they had. Although I've had it for a couple of years now, it needs 0.5mm lead, which appears to be the most difficult lead refills to find. These two packets will keep be supplied for a good while. 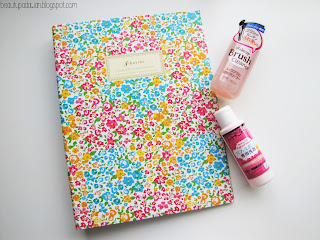 5. Floreine binder || An adorable piece of stationary that I bought for placement! I get given so many documents whilst there that it's easy to become disorganised very quickly. I figured I may as well have an adorable binder to help combat that! Unfortunately, it's only a little larger than A4, so the pocket refills that I put inside kind of... poke out of the front, if that makes any sense. My documents weren't quite as neat and maintained as I'd hoped, so I ended up not using it. Oh well!

6. Daiso Makeup Brush Cleaner || One of the things my brother bought for me! I've heard several good things about this brush cleaner, so I'm really eager to give it a go. It's such a small bottle, though -- 150ml, I think -- that I don't know if it's going to last me very long. That being said, it probably works out to be cheaper than alternative brands.

7. Daiso Detergent for Puff and Sponge || This was what I was after the most, and my brother delivered it to me! I have a Kit Cosmetics blender sphere and it gets filthy so quickly, but I didn't have anything to clean it with -- I was practically looking to just buy a new one to replace it. Holy cow, does this do the job. I do find that I kind of need to put detergent all on the dirty areas, but it practically makes it look brand new again! I can still remember the utter shock I had as I saw the dirty water run from it to reveal a gleaming pink sponge.

8. Cake scraper (not pictured) || I was so excited to use this that I ripped the packaging off as soon as I got home and put it away. I'm not actually sure what a "cake scraper" is meant to be, but I'm not going to use it for whatever the name makes it sound like it's supposed to do. You know how when you chop vegetables and stuff, it gets all over the board and just makes a massive mess when you try to put it into the pan? I use this to kind of gather everything into a heap to dump it in. It just makes everything so much easier. Insert heart eyes all over the place.

That shows all that I've gotten from Daiso. I definitely want to pick up some more detergent in the future (that shiz is the bomb), and if I ever manage to properly organise my current collection, I might look at also purchasing some of the cosmetics!

Have you ever been to Daiso and purchased anything? Do you have any similar stores where you live? Let me know!