If there's one thing I love, it's red lipstick. I have more than I'll use in my life, and yet, like a moth to a flame, I seem to keep gravitating towards them! After hearing about the L'Oreal Paris Collection Exclusive Reds on various parts of the bloggersphere over the last year, I knew that I had to ignore the little voice of reason in my head (the personified version of which I call "Mother") and just go for them.

Yes, all of them. 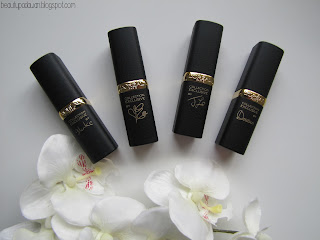 Unfortunately, I didn't have the necessary gold pieces in my purse when they first came out, and, as a result, I could only manage to get four of them. The two most interesting shades to me, Frieda and Laetitia, were both sold out at every Priceline I went to -- and I didn't do any better at Target or Big W, either. 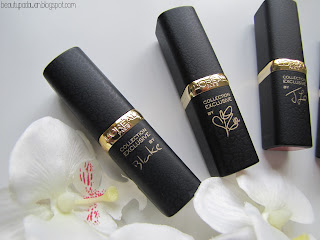 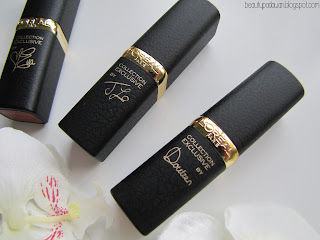 Still, I have picked up four of them, so let's get straight to them!

The packaging is similar to the Nudes collection that was released earlier in the year (you can read my belated review here if you'd like a refresher), with the elegant black packaging, but it differs in that it's embossed with a reptilian scale pattern. Once again, the Colour Riche logo is on the top of the slanted cap, the tube is a yellowy gold, and the lipstick itself is embossed with the brand name. 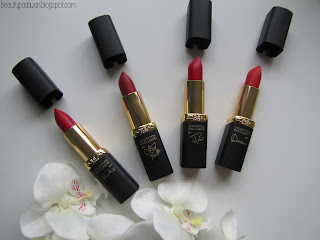 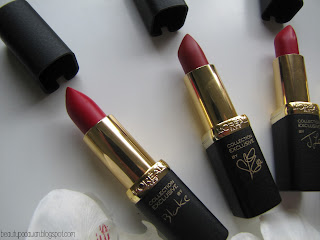 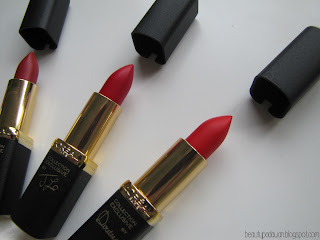 Blake's Red (Pure Ruby) || As if I wasn't going to grab this. It was the only lipstick I saw from the US and UK bloggers, so it was right at the top of my list! It's a gorgeous blue-based raspberry red that covers your lips with one coat. It's wonderfully creamy, drying out after a few hours. It looks very similar to JLo's red (which is also blue-based, but less so), so you don't need to worry if you picked that up but missed out on this.

Eva's Red (Pure Brick) || This is also a really nice red, being more of a sort of classic, rusty, true brick red shade. It doesn't really have too much of a yellow tone that I can pick up until I compare it to Blake's Red and JLo's Red. This also has opaque coverage, doesn't bleed and dries down a bit after a few hours.

JLo's Red (Pure Rouge) || Like I mentioned earlier, if you have Blake's Red, you don't really need this one. They look very, very similar, both when swatched and when worn -- but if you look closely enough then you'll be able to tell that JLo's Red doesn't have as much blue as Blake's does. I think this has the potential to make it a little more wearable to a variety of skin tones, particularly those that don't seem to like cool-toned lipsticks. Like the other lipsticks, this goes really creamy and dries down after a few hours.

Doutzen's Red (Pure Fire) || I only bought this before it was the only one left available after scouring half a dozen different stores, and I must admit, I was worried. It's the most orangey lipstick I own, so it was a rather adventurous purchase, but I was surprised by just how red it looks on my lips! I think the formula for this is slightly different than the previous lipsticks, as it can be worn sheer enough to get more of that orange and it applies a little unevenly when you try to build it up. It is a firey red on the swatch, for sure, but I think of it more as a blood red. Think about a time you've accidentally bitten your lip and a slight blood smear -- that's what this lipstick looks like. That tomato-y blood red that could probably get away with looking like fake blood if used in a film, it's surprisingly more wearable than I thought it would be.

Just don't eat a sandwich while you're wearing it. The lipstick traces might just accidentally fool you into thinking that your mouth is bleeding somehow.

These lipsticks disappeared rather quickly when they came out, but I still think it's worthwhile checking out any local Priceline, Big W or Target stores to see what they have on display -- have a look near the regular Colour Riche section. The Priceline website still has Laetitia's Red and Doutzen's Red available for purchase.

"So why don't you buy Laetitia's Red?" I hear you ask. It's because allowing myself to shop online would be akin to falling into a rabbit hole from which there is no return. I've gotta save money somehow!

I think these are lovely lipsticks overall, and a good way to start building a collection if you're new to red lipsticks. It's not necessary to have them all, and I would think twice about buying them if your red lipstick collection, like mine, is as big as Queensland. That being said, if you adore one of the celebrities featured in the collection, go and see what you can find!

Did you get any of the lipsticks from this collection?