It's like every blogger and her sister do a monthly Instagram post, and after months of wondering whether I should jump on the bandwagon or not, I thought, 'Well, why the hell not?' After all, I've thought about adding the odd lifestyle post here and there, but let's face it, I can chat the hind legs off a donkey when I'm talking about a tube of mascara -- you have no idea how much I love talking about day-to-day happenings!

So here we go: my June adventures (or lack of) on Instagram!

You might want to give the end a miss if spiders make you feel icky. 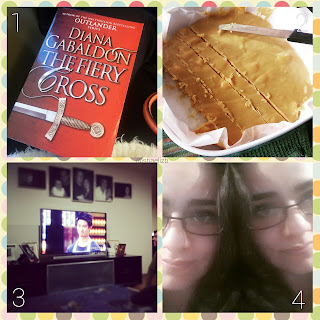 1. It took me between 9 months and a year to find this gem, but now it's all mine! JE SUIS PRET, SASSENACH. #outlander #thefierycross #seriouslyivebeenlookingforages

Seriously, I was looking for The Fiery Cross everywhere and found it nowhere. I had to have a copy sent from the other side of the state to get it but of course, that meant it took a few weeks to arrive, and by the time it did, I was too busy to read it and had to send it back. By a stroke of fate, however, I found a stall at Supanova this year that was selling it so yes! It's all mine!

2. I want to say that Mum made this fudge for me for my birthday, so I will... Even though she didn't.

Mum made a tray of absolutely delicious vanilla white chocolate fudge, and it's safe to say that I probably ate two thirds of it.

If you're not in Australia and can find a way to watch the 2015 season of MasterChef, do it. Seriously. Reynold just has the most adorable face -- I want to squish his cheeks so bad.

I put my face next to a mirror one night and tried really hard to get it to look even. I know which side is real -- can you put your finger on it? 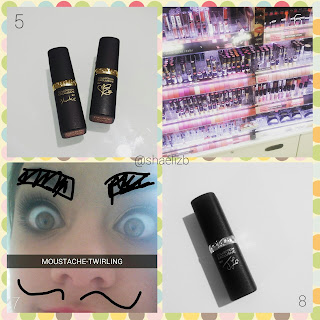 5. Today's new purchases! How many red lipsticks did I have before? Like, 30, but that's irrelevant. #LorealParis #bbloggers #bbloggersau

I picked up the Blake and Eva lipsticks from the newly released limited edition L'Oreal Paris Collection Exclusive Reds line, and I looove them!

6. What happened to all the Lip Butters?! #Priceline #Revlon #bbloggers #bbloggersau

You guys. The Lip Butters have been discontinued, you guys. I was stunned to find this out! Apparently they've been replaced by the Ultra HD lipsticks, but this kind of surprises me given how much of a cult status I believed the Lip Butters had. Perhaps I was wrong? Either way, if they're truly on their way out, it's time to start searching the Myer clearance bins to stock up!

I was having a proper go at Snapchat for a change (I still really have no idea what I'm doing), and decided to send this very glamorous shot to my mother. By text.

8. Bought this today with a @pricelineau voucher that I had! I'll need to do some swatching to be sure, but to me the #LorealParis Collection Exclusive Reds in "JLo's Perfect Red" is VERY comparable to #MAC's Viva Glam Rihanna 1, minus the frosty finish. Loooving it! #bbloggers #bbloggersau

My voucher was for almost $17 and the L'Oreal lipsticks were 30% off, so... Ta-da! I'm actually not certain that it's close to Viva Glam Rihanna 1 anymore, but it gives my lips that same super-full effect -- whatever that means. 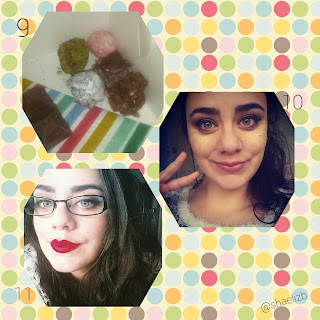 9. My best friend bought me some sweets from a patisserie for my birthday last week! (She also bought me books :D and they are brilliant.) #bestfriend #bestever

I was given some delicious little sweets that came from a local patisserie, and boy were they good! The books, as it happened, were Wolf Hall (which I seriously need to watch because Charity Wakefield) and Year of Wonders, both of which I'm really excited to read!

10. Looking like I have feathered wings on my cheeks. :D #bbloggers #bbloggersau #concealer

I used Rimmel's Wake Me Up concealer to highlight/conceal undereye circles and noticed before I blended it in that I looked as though I'd painted chicken feathers on my face. Hilarious!

I'm pretty sure that I've mentioned Hermione the Hair on this blog in the past, but just in case you were wondering (or maybe just forgot): Hermione the Hair is my hair in its natural, frizzy, fuzzy, curly glory. It's my bed hair, my freshly-washed-and-air-dried hair, my I-just-took-it-out-of-a-hair-do hair, and 80% of the time it tends to look kinda cool as is (yep, even when it's bed hair) so I roll with it. 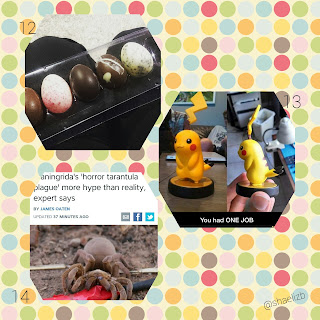 12. Eating my brother's Easter eggs. Sorry, bro, you leave them this long, they become part of the public domain! #muahaha

13. My friend put this on Facebook -- who would DO such a thing?! #Pokémon

One of my brothers pointed out to me that this was actually likely to be a customised Amibo character for those Nintendo games -- apparently it's a thing that people do, just so it looks like they've got a wacky character. In the game, however, it would look normal.

I found out a couple of days ago that news stories have been circulating on the international news that a town in the Northern Territory was suddenly invaded by 24,000 killer tarantulas that could "rip into your skin".

Seriously. Our wildlife does want to kill you, but not that much.