I first skipped over this palette by Makeup Revolution when I was first on the hunt for a heap of eye shadow to buy -- after all, bright vivid colours? What was I going to do with a palette like that? About a week later, I was thinking about the Urban Decay Electric Palette and my increasing desire to play with new and exciting colours. I decided to take another look at the Colour Chaos palette and, sure enough, it suddenly seemed like an exciting prospect. Bright vivid colours? With a $70 price difference, why the hell not? 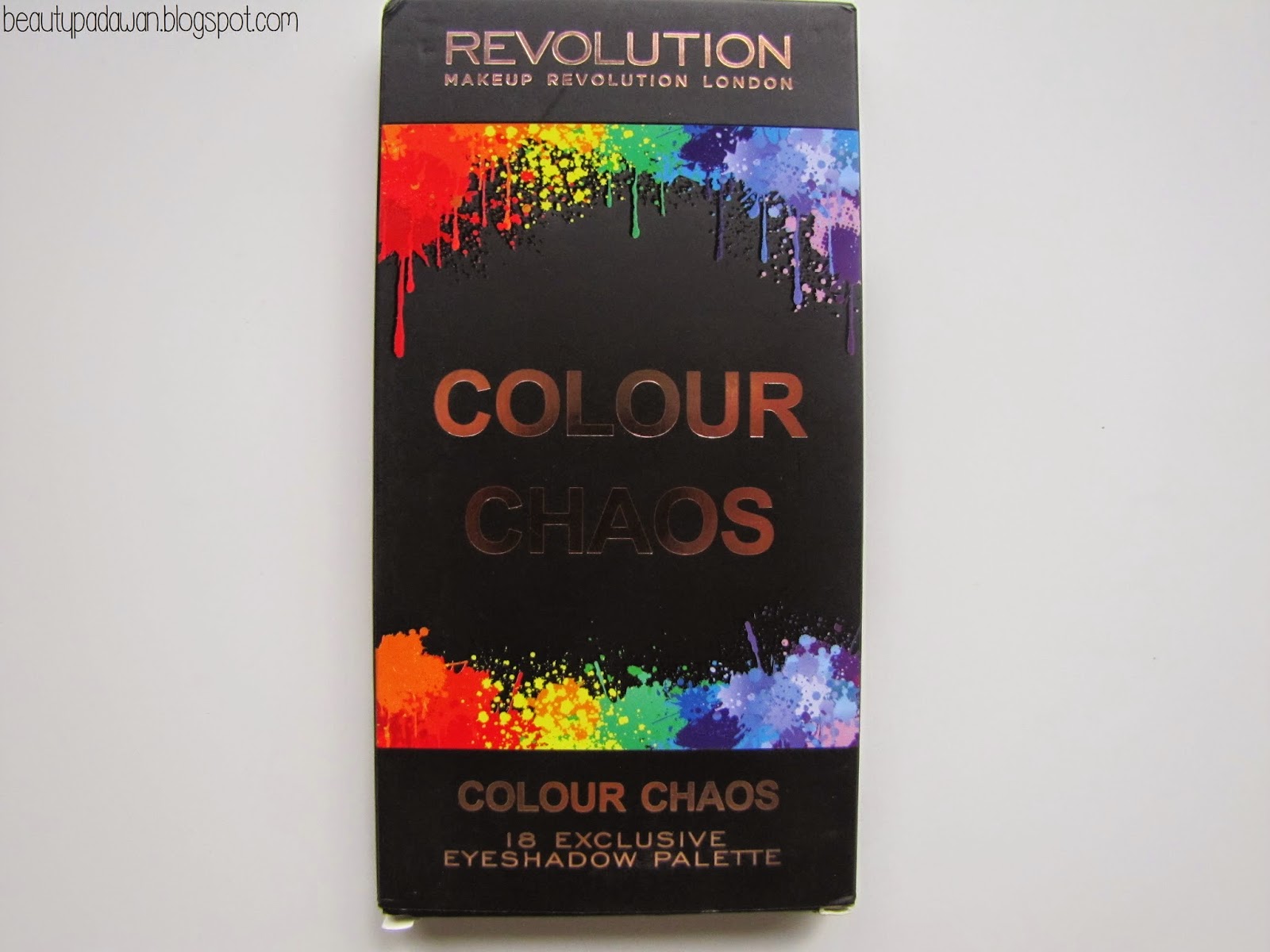 I've had a lot of difficulty with opening the Makeup Revolution palettes, but Colour Chaos was the easiest of the lot by far. The casing is plain and black, the same as all of the Salvation palettes. With only a sticker on the underside indicating which palette you're about to open, it's something of a pity that it's not more exciting -- but then again, it would likely add to the cost of the palette, and Makeup Revolution certainly doesn't need flashy packaging to garner attention. 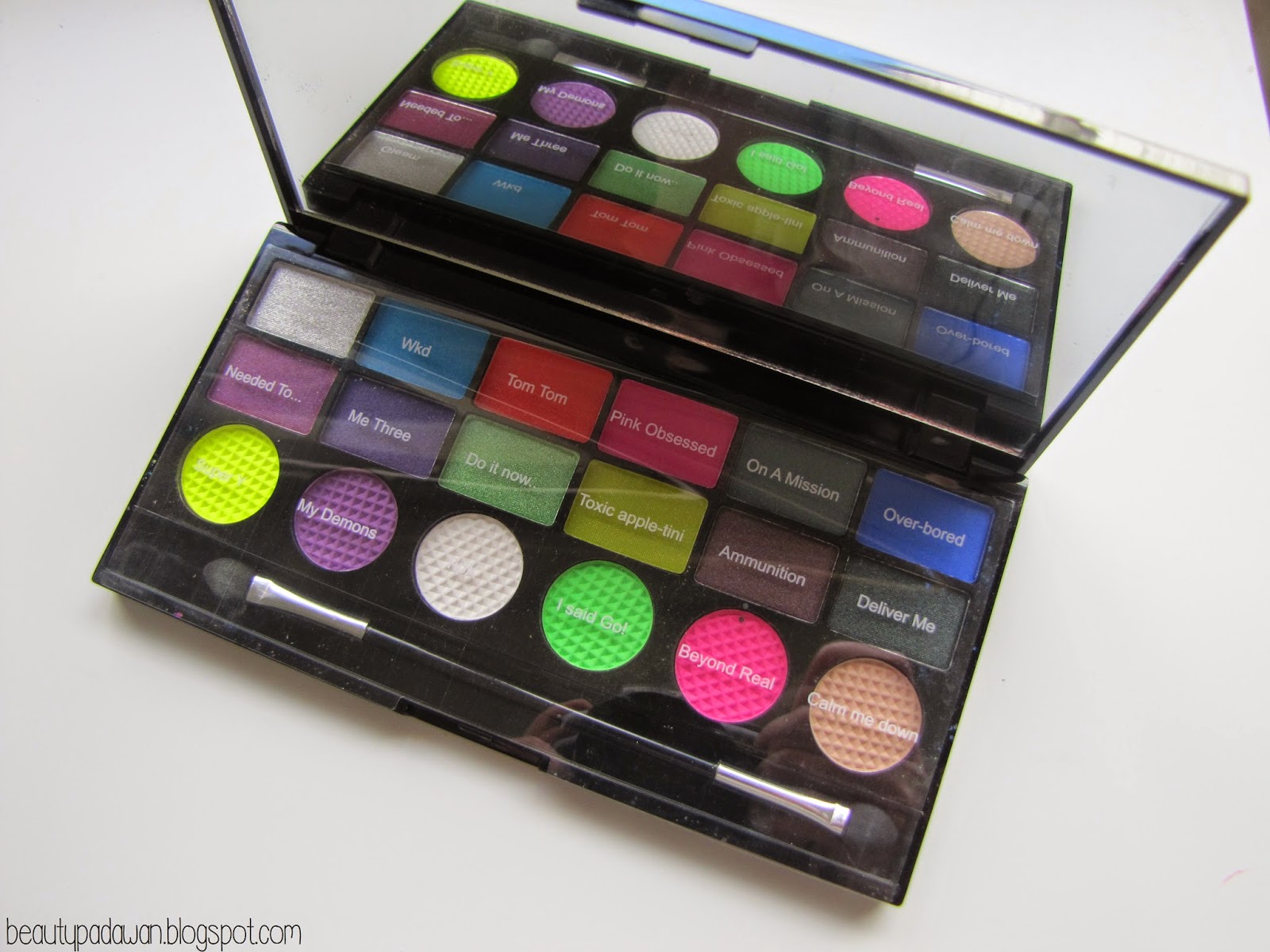 Upon opening the palette, it's so easy to be taken in by the bright array of colours that you might also not notice the incredibly huge mirror -- perfect to see my whole face at once, which is what I like in a mirror. I don't want to have to "zoom out" to see what my face looks like with an eye look, you know?

Then there's the shadow. There are twelve shimmery shades and six matte, but in most cases the shimmer is so faint that I feel like these come off as a matte shade. It's quite interesting, because all of the mattes I've so far used by Makeup Revolution have tended to be powdery rather than creamy -- so I'm not quite why there needs to be such a discrepancy in quality! 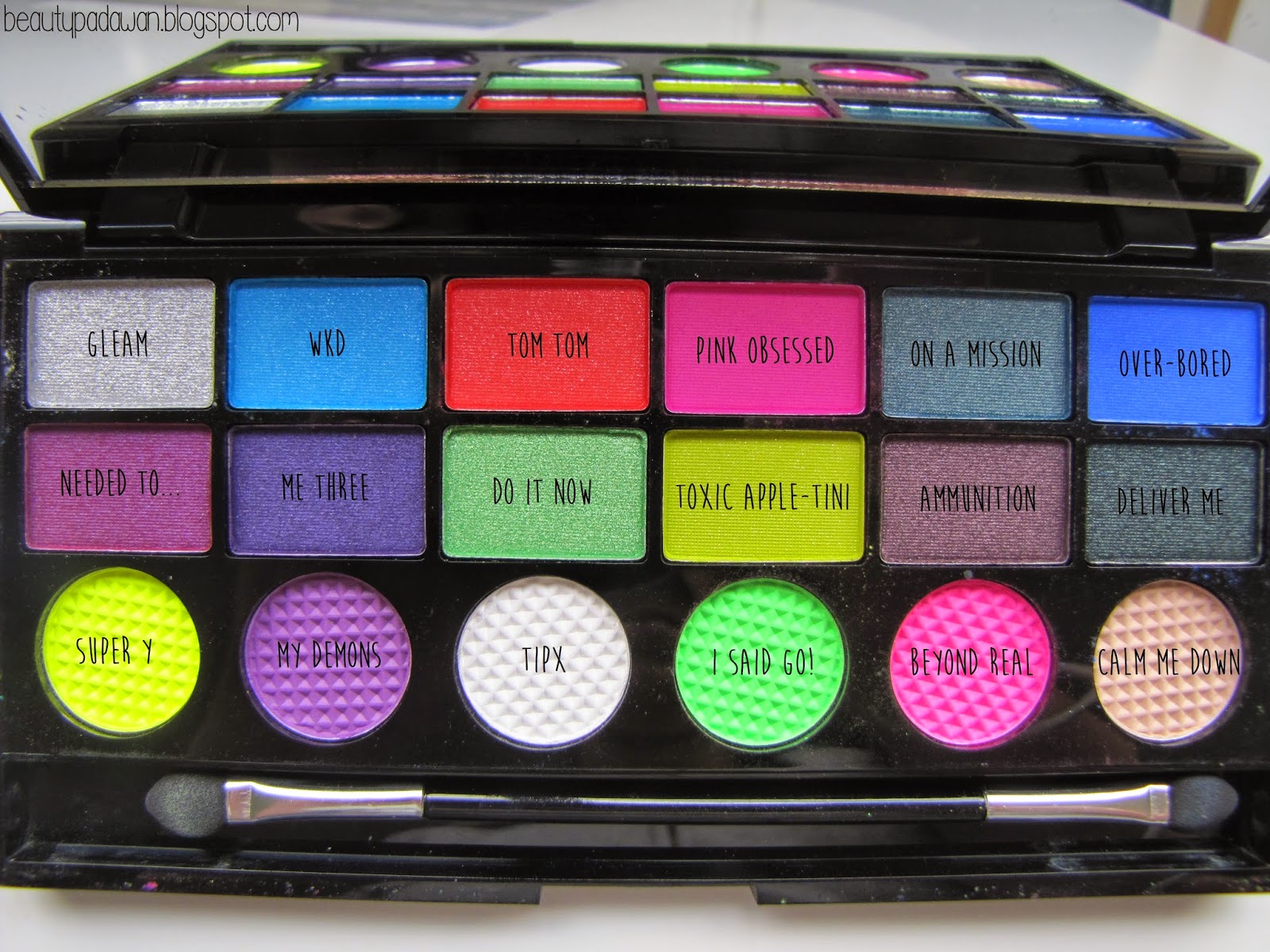 Onto the shades themselves. Although I don't own the Urban Decay Electric Palette, I've done my best to find dupes for each of the shades. 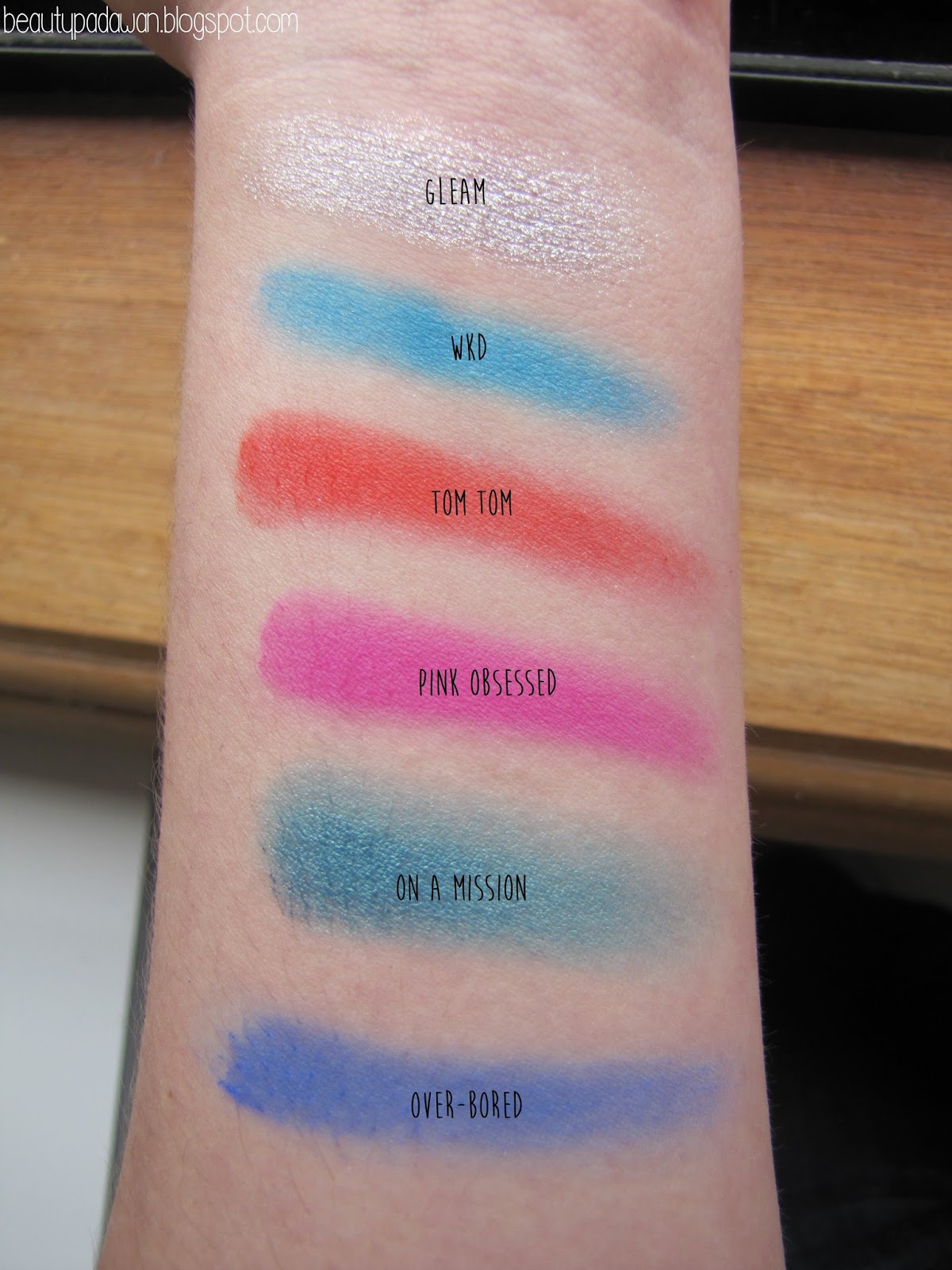 Gleam || This feels like an eye shadow made up entirely of glitter. It's the colour of aluminium foil and although it seems to start off sheer, it builds up evenly and well. It's the most obvious dupe for UD Revolt, but this seems a bit less... silvery -- which makes absolutely no sense, because alo foil is definitely silver.

Wkd || This really does feel like a dupe for UD Gonzo. This shade is velvety, creamy, buttery smooth and it makes my heart sing to swatch it. It's supposed to be a metallic shade, but there's only a very small amount of shimmer in it.

Tom Tom || At first, I thought, "What the hell kind of name is Tom Tom for an eye shadow?" Then I thought about how much it looked like a tomato-y red and the penny dropped. This felt slightly drier to the touch than Wkd, but still not dry, if you get my meaning. It looks like a dupe for UD Slowburn, but perhaps with more of a reddish hue. This does have a tendency to stain slightly.

Pink Obsessed || This has a really velvety texture, similar to Tom Tom and not quite as creamy as Wkd. This seems to be the closest to UD Savage, but I feel like they'd be somewhat different colours if I compared them side-by-side. Like Tom Tom, this did stain my eyelids a little.

On A Mission || I'm not confident that this velvety beauty is an exact dupe for UD Fringe, but it was definitely the closest in the palette. I think this shade is a bit darker, a bit bluer and perhaps less metallic, but it is still incredibly gorgeous.

Over-bored || Over-bored is, unfortunately, not the greatest shade in the palette. It may feel velvety, but it's actually rather chalky; it builds up okay, but not as well as other chalky shades do. Considering that this is supposed to be a metallic shade, it's surprisingly disappointing. This is the closest dupe for UD Chaos in the palette, but it's a much darker blue. 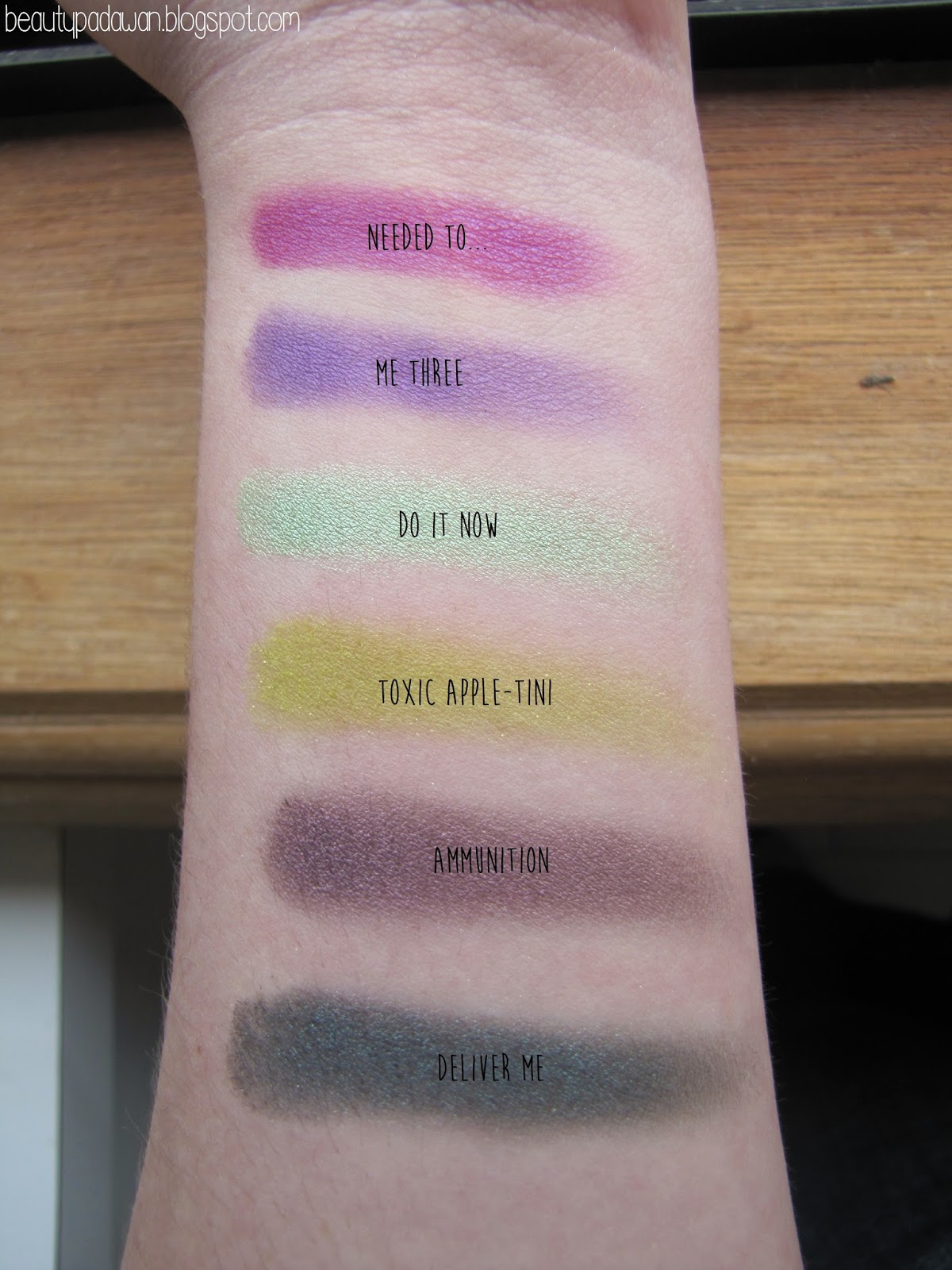 Needed To... || This shadow is a metallic magenta, holding a little shimmer but not really too much. It's comparable to UD Jilted, but it looks more purple to me.

Me Three || This shade is absolutely beautiful. I would say that it definitely seem comparable to UD Urban, but of course without owning the Electric Palette, I can't tell how much. It is definitely a metallic shade, but it's not overly glittery. It feels quite velvety to swatch.

Do It Now... || Do It Now... is a really delightful-looking apple-ish green, with a bit more of a metallic presence that the last few shades. It's dupable for UD Freak, though Freak may be just a little more yellow-toned.

Toxic Apple-tini || There's no shade in the Electric Palette comparable to this. This tennis ball colour -- not quite green, not quite yellow -- could be Makeup Revolution's answer to UD Thrash, but I doubt it. This shade is supposed to be metallic, but it seems a little more glittery than anything else.

Ammunition || This is a kind of grey-toned purple with shimmer running through it, and it's great to balance out all of the bright colours in the palette. It's nice and velvety to swatch and I find that a little can go a long way.

Deliver Me || This dark metallic camo green is on the slightly drier side of velvety when you touch it, and for that reason, a one-swipe swatch will disappoint. However, it really builds up nicely, and you can get some great pigmentation out of it. Like Ammunition, it's great to balance out all of the bright colours. 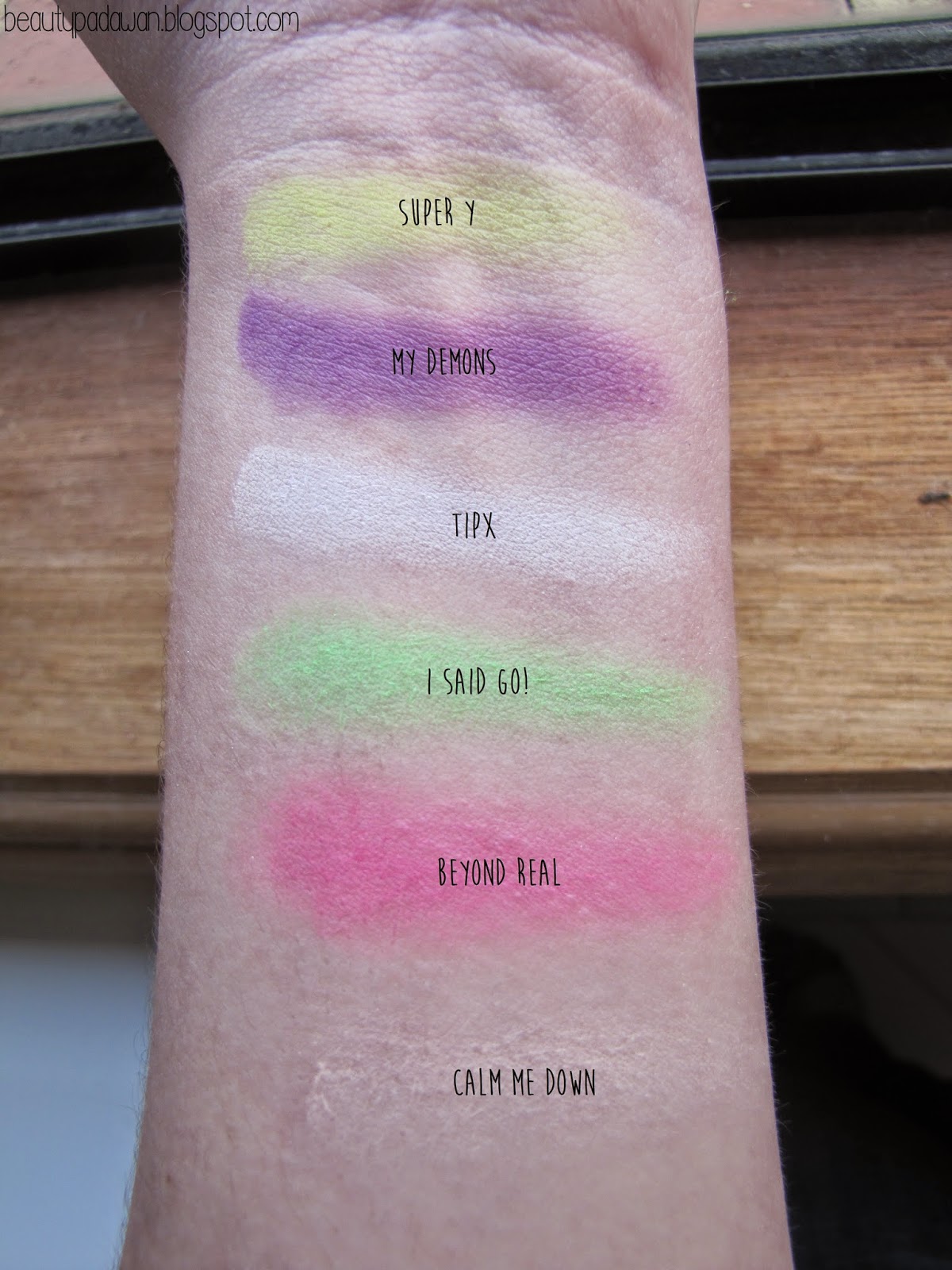 Super Y || This highlighter yellow is, like most other matte shades made by Makeup Revolution, is on the powdery side. I think it builds well, however, and when mixed with Toxic Apple-tini, I think it gives off a colour more similar to UD Thrash.

My Demons || This shade was a little disappointing. It looks like a violet purple but comes off as a cool magenta before building up back to a further purple. It's patchier than Super Y -- it builds OK but doesn't blend as well as I'd like it to.

TipX || This works really well as a light browbone highlighter -- it looks really stark in the pan but its sheer enough that you could use a little of it to define and it wouldn't look too much. It also works relatively well as a base, particularly with Gleam.

I Said Go! || This is actually the best matte shade in the palette. It's a grassy highlighter green that swatches evenly and builds well. Despite how bright it is, I actually think it could work really well for an everyday look if you knew how to use it.

Beyond Real || Also a disappointment in the palette, Beyond Real swatches powdery and uneven, but it builds OK. It doesn't blend too well -- I'd prefer to use Pink Obsessed -- but I think it might be alright as a light transition colour.

Calm Me Down || The perfect name for a nude shade like this, it doesn't show on my skin too well because it almost matches it perfectly. I use it on my browbone to clean it up a little.

All up, this truly is a great palette. If you want the Urban Decay Electric Palette on a much cheaper price, I would definitely recommend this as an alternative -- after all, why pay $82 when you can pay $11? To test it out, I recreated the looks done by Emily from Beauty Broadcast in her Electric Challenge to see if the colours in the Colour Chaos palette would work as well together. They all blended together beautifully and they lasted all day -- despite how much some of them contrast, they do seem like they are made for each other! Like with most other Makeup Revolution shadows, I experienced no creasing whatsoever. In fact, rather than separate, over time the shadows seemed to fuse more and blend with each other -- if that makes sense.

I did notice that Tom Tom and Pink Obsessed stained my skin a little when taking the shadows off, but I don't think it's too bad and it's gone by morning. I know that the UD Electric Palette actually comes with a warning to avoid using Slowburn and Savage on the eyes because the FDA (I think) has approved them as safe for use; there's no such warning on the Colour Chaos palette, but the laws in the UK are different and there don't appear to be any such scruples. If you were concerned about using Slowburn and Savage on your eyes, it suffices to say that you may want to avoid using Tom Tom and Pink Obsessed as well.

This was probably one of the best purchases I made from Makeup Revolution, and I can't wait to start properly playing and coming up with new ways to use these colours!

Have you used the Colour Chaos palette from Makeup Revolution? What are your thoughts?