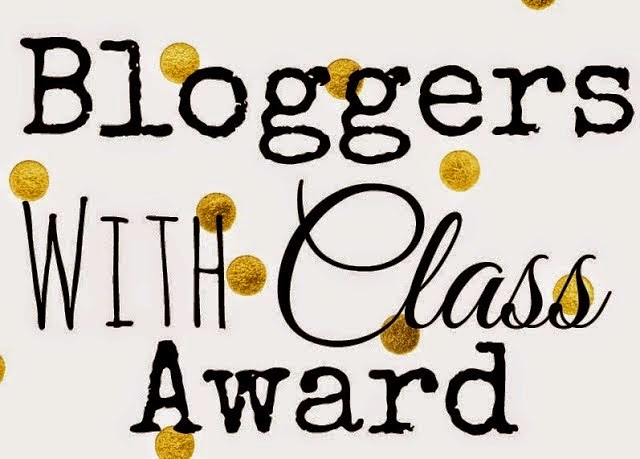 I was surprised when I was nominated for a Liebster Award. I was very surprised when I was nominated for a second (which I'll put up when I find more bloggers to nominate). I don't think that I can accurately describe the amount of surprise that I felt when Amy from Style Storms nominated me for the Bloggers With Class Award (created by Classy Cathleen). After all, with all my truncations and pop culture references, I wouldn't have thought my little forkful of the Internet pie to be good enough! Really, this means a lot Amy, so thank you!

I met Amy through Twitter -- it's how I'm meeting most bloggers at the moment -- and we hit it off with discussions about Katherine Pierce and trips to Malta as lengthy as 140 characters will allow. Amy's often putting together inspired makeup and fashion looks together on her blog that often give me something to think about, so it's definitely worth checking out!

These are the rules for the Bloggers With Class Award:
And without further ado, here are my answers to the questions!

What do you think it means to be classy?

To me, it's about your attitude. You need to hold yourself at a level that clearly distinguishes you, in a positive light, as being above the riff-raff. You need honesty, kindness, tact -- just a good spirit in general -- and luckily I think a lot of people are like that. It's not always about the money you have or the clothes you wear -- you can put anybody in Jimmy Choos, but some of them are still going to act like trash.

Who are some of your role models?

This is a really difficult questions to answer. There are many men and women that I like, but they're not necessarily fitting to be a role model -- after all, I'm a big fan of Lady Jane Grey, but how will she, a 16-year-old girl who was beheaded because of politics after being Queen for nine days, help me?

I think, for me, the big role model has to be Jena Malone. It's hard to describe because I feel like words won't do it justice, no matter what I say. She's such a free spirit -- she seems to see the soul and beauty in everything in the world, and I can't help but want to be like that too. No matter her ups and downs, she's able to draw inspiration from somewhere and put a positive spin on it. She's a little weird, a bit out there, and she's constantly encouraging self-appreciation and loving the skin you're in -- it's precisely because of Jena that I've been able to push out a lot of the negativity that was within me and empower myself to reach out for what I know I deserve.

On a kind of strange, similar, smaller scale is this actress, Chelsea Fitzgerald. She's really not well known, by any means, I can't lie there, but I came across her showreel ages ago whilst stalking the depths of YouTube for footage of Catherine Steadman (another actress for another time), then somehow found her on Twitter. I've been following her for a while -- I've watched her on Plastic Gangsters, which was pretty funny -- and, I don't know, it's weird but for as much I don't know about her and for the little I do, I've looked up to her in the strangest moments. Here she is, working hard in one of the toughest industries there is -- and she's making some headway, bit by bit -- so whenever I feel like my own, more modest dreams are unreachable, I think, "She can find the courage and determination to live her dream, so can I too."

I know, it's weird, right? God knows how my brain works, because I sure don't.

Who are some of your style icons?

Jena Malone, again, for one of them. We have very different body shapes, so I can't pull off the clothes that she can, but I still appreciate it all nonetheless.

Another is Perdita Weeks, a small-time British actress who's popped up in a few well-known projects. She looks effortlessly chic in whatever she wears, even when it looks like she's wearing minimal makeup. Something I've particularly noticed over the last eighteen months or so is that Perdita also recycles parts of her wardrobe -- there have been a few times where she's worn the same coat or purse or necklace as she has for an earlier event. (Wait, does that make me a stalker?) I wish I knew where she got her clutches from, I adore them.

Third is Charity Wakefield. She's -- you've probably guessed it -- a small-time British actress who's also, thankfully, starting to get noticed. She's big on vintage fashion, particularly from the 50s and 60s, which I adore, so I'm constantly pulling inspiration from what she wears.

I think I should say now -- I like small-time British actresses. You should probably thank Jane Austen dramas for that.

Oh, goodness! I honestly don't think I'd look that good in either, but... I'll go with bows. I could make bows work more than I could pearls.

This is an oddly similar question to the earlier ones about role models and style icons. Here, though, I think I could add people who aren't "role models" in the same sense, but like my role models, they do fill me with some form of positivity and inspiration. There's Danielle, of course, Karen from Makeup and Beauty Blog and Chloe Morello -- you can look at my Makeup Inspiration page, pretty much, and gleam my beauty inspiration from there.

Is it troubling that I don't seem to take much inspiration from men? I know that inspirational men are out there, their names are floating around the deep space area of my head, but I just can't call their names to mind at the moment. Celebrity crushes don't count, after all.

What is your favourite colour?

Green. Particularly light greens, which could lean towards pastels or Granny Smith apples.

Do you like the classy style? What are some of your favourite pieces/trends of the fashion style?

I do like the classy style -- or the sound of it, at any rate -- but I confess to not knowing too much about what that is. I tend to think of it as looking neat and polished, not necessarily a particular kind  of garment, but how one wears them. I'd like to own classier clothing, but I really just love hassle-free jeans and t-shirts, so clothes aren't much of a priority. I have to confess, though, white blazers with a three-quarter sleeve have caught my eye lately, as have leather ankle boots. Are they still called ankle boots these days?

What are some of your favourite quotes?

Let me take a second to have a gander at my Facebook page...

"What ever you need to do to find your own voice, do it. Then use it, and do not feel bad about it." --Jena Malone

"I've really learned you don't have to fit in. No matter where you go, you're always going to be you and if they don't like you for who you are, then what's the point of being someone else?" --Jena Malone

"Well done on having a cat face for literally every emotion." --My best friend.

Why is it important to have class?

This is a difficult question to answer. It's so that you can be the best version of you possible -- if you have class, that's who you are. I guess that's what I mean about class being in the attitude rather than the looks. It's hard to find a despicable person doing despicable things with class, isn't it? When you fuse a twisted idea of "class" with negativity, it isn't class anymore, it becomes something else.

When/Why did you start your blog?

I started my blog in March this year, and I started it because I made a pad thai that was so gross that I felt compelled to tell people not to follow the recipe! There was also the added factor that I was fresh on the beauty scene (and, really, I still kinda am) and this blog was meant to kind of document my successes and failures -- and there have been surprisingly few of the latter.

Alrighty then, that brings an end to the questions! The next five bloggers that I would like to nominate are:

You five ladies are some of the classiest bloggers I can think of, so don't forget to join the Bloggers With Class Community -- and then link me back to your post, I really can't wait to see your answers! If you're by chance already part of it, I'll edit the original post and nominate an extra person to make sure I can get the full five fresh 'uns. (That's not breaking the rules, right?)