Life Through A Filter | November 2015

I knew that November was going to be a hellish month -- I didn't realise just how hellish. Being on placement throughout October meant that all of the assignments due then had to be pushed back until November, and it was no easy feat to get them all done. I officially averaged less than twenty-four hours of sleep a week, and I'm still playing catch up with my work.

When does this madness end?!

I know the answer, and it's July: when my course finishes.

Cue gifs of tears rolling down my face.

I still managed to snap a few pictures last month, however, and, as usual, I have collated them all for you here! 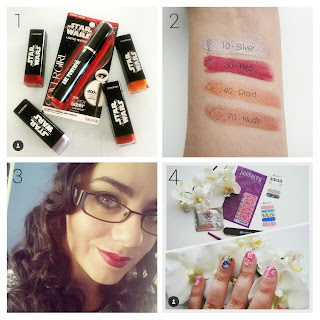 1. Went to the shops on a mission, and picked up every available piece of the CoverGirl Star Wars collection! We only get four lipsticks and five of the ten mascaras, but just as well -- this obsession ain't cheap!

I found out the release dates for the Star Wars collection at different stores -- it was meant to be at Coles and Target first, then Big W and Woolworths, then Priceline. So I marched on over to Coles: nothing. Then to Target: also nothing. I was about to leave the shopping centre when I decided to check Big W on a whim, even though it wasn't meant to be released there for another week -- and bingo was his name-o!

2. If you've eyeballed the CoverGirl Star Wars collection that released two days ago, I've swatched the lipsticks for you! They all seem to have some degree of frost to them, but time will tell! Note that Australia is NOT getting the lilac or Stormtrooper shades, nor are we getting the waterproof mascaras.

We didn't get the nail polishes either, but I'd forgotten about those at that point.

3. Today's forecast is curly hair and red lipstick. This is the red CoverGirl Star Wars lipstick (No. 30). The colour is true, even with the filter. Totally wearable, slightly frosty, and actually really nice for Christmas.

If you were going to pick up one shade from the collection, this would be it!

4. Pardon my ugly paws, but I have a brand new post up! Today I've reviewed Jamberry's nail wraps, which launched in Australia in October! Check it out, let me know what you think.

If you're interested in reading my thorough, in-depth review, you can clicklity-click here. 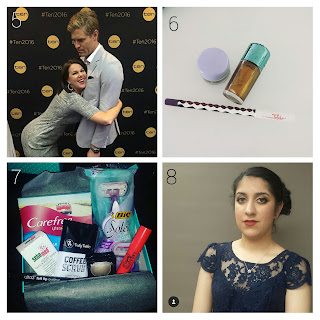 If there was ever one show to watch this year, it was definitely Australia's inaugural version of "I'm a Celebrity, Get Me Out of Here!". It was hosted by Julia Morris and Dr. Chris Brown, the former of which aggressively hit on the latter -- and it was hilarious. I cannot wait for the next season, it's going to be great!

6. Went to an event today that sold old discounted stock from brands owned by Estee Lauder! Picked up a MAC Cinderella Fluidline in "Little Black Bow", a MAC Alluring Aquatic Varnish in "Neptune", and a MAC Toledo Pearlglide Intense Eye Liner in "Designer Purple". Loving them!

I was so excited to go to this event! It had a $15 entry fee that went to Ronald McDonald House Charity, and everything inside was about 40% off! I had a budget, and amazingly, I stuck to it!

7. So much win in this month's Bellabox!

I cannot wait to try out eveything in the box, especially that coffee scrub: get on mah face!

8. Did my cousin's makeup for her graduation tonight! She is not one for makeup, so this was certainly a rare occasion. This look was inspired by a tutorial created by Teni Panosian (who, btw, is just amazing).

This was so much fun to do, and such an honest-to-goodness honour. My cousin isn't a tomboy, per se, but she is definitely not interested in the girlier things in life. She told me that everyone kept telling her how her liner was "on point", which is honestly the best compliment one can hope to achieve! 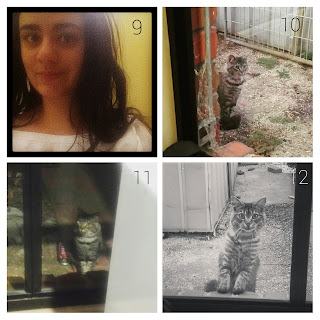 9. Side effects of being a postgrad student. #healthissuesalldayerrday

Who has two thumbs and had to get an MRI? This girl! I've been inundated with health problems lately.

10. This cat has been using my backyard as a thoroughfare lately -- and we haven't had that happen since long before I got Claflin. If I see it one more time, I won't care that it has a collar, I will assume honorary ownership, I will give it a name and I will name it Boudica.

We have staring contests frequently, y'know? (And if you're new and want to know who Claflin was, check out here and there).

11. I came back from the bathroom and el neko was staring at me (with a random Coke can?). So that's it. I've warned the world. Meet Boudica.

Boudica was a British queen during the Roman occupation of Britain, and by most accounts she was pretty fearless!

All in all, November was a packed and very stressful month, and I'm hoping that December is going to be something of the opposite -- one can only hope, right?

What did you get up to last month? Tell me all about your own adventures!

Email ThisBlogThis!Share to TwitterShare to FacebookShare to Pinterest
Labels: Life Through a Filter, lifestyle