Life Through A Filter | September & October 2015

September was an Instagram-busy month for me, and October was busy for an entirely different reason: I was on placement! The last time I'd been placed, I still had some time to post, but this one was entirely different; I spent every ounce of free time working!

Thus, things were slow over the last month on the Instagram side, but I still managed to have a couple of adventures -- so let's get to them! 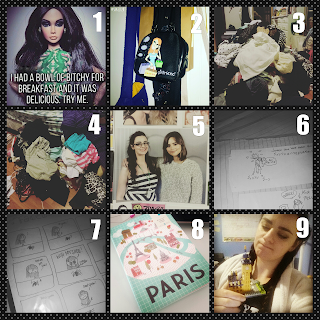 You know those days where you wake up in a bad mood, and everything you look at just seems to make it worse? Yeah.

2. I'm decluttering my wardrobe and so torn about whether to throw this out! It was the first #handbag I ever had -- my mother bought one for a friend for her 11th birthday (@sarah_bluebird do you remember this? Were we 11?) and I loved it so much that I begged her to buy me one too. 12 years later and it's in impeccable condition. #declutter #girlfriendmagazine

I ended up keeping it!

3. And seriously, when I say decluttering, this is what I'm going through.

I couldn't really show how big the pile was in the photo -- it just wouldn't fit!

All of that clothing (plus the several pairs of shoes I tossed as well) filled up eight plastic bags! It all went to my cousins to sort through and keep or toss as they chose.

5. While there's still 15min left, my #wcw this week is @Jenna_Coleman_. I got a chance to meet her and chat to her last October. Poor woman must've been so tired and jetlagged and overwhelmed by zealous fans, but she was still really lovely to talk to and remembered my face when I saw her the day after. Also we're the same height, so that's cool. #shesalsofriendswithperditaweeks #perditaweeksismyultimatewcw #seriouslyidontshutupabouther #lookatthathermionethehair #refusestobetamed #jennacoleman

How can anyone not love her?

6. #fbf to when @jpantsfoshizzle was a stick figure and Jenson came home earlier than usual. #yr11japcomics #LOLZsorrymrjean

I used to draw a lot of little comics like this when I was in Year 11. I would flip through my Japanese dictionary, pick out a phrase and then substitute a couple of words to make it sound funny or weird!

7. #fbf to my days as an artist. I was inspired by the simplicity of stick figures and the way in which they could be manipulated to display complex emotions -- plus they were easy and I could quickly draw loads of them. Pretty sure I drew this in Year 12, either in RE (most likely), Chemistry or History. #sorrylouis #aintnobodygonnavetothis

I also drew a lot of little comic strips as well! I remember that there was a funny Facebook status going around at the time about a spider, and so I drew a comic strip based on it.

8. Found out that my mother bought my this notebook yesterday. It's so adorable, I love it. #stationeryfiend

I haven't yet found a use for this notebook. I want to make sure it's not wasted!

9. Sundays are about working all day, studying all night, and procrastinating by way of examining a miniature Big Ben. #postgradlife

It's amazing how much time you can waste by staring at tiny little blocks. 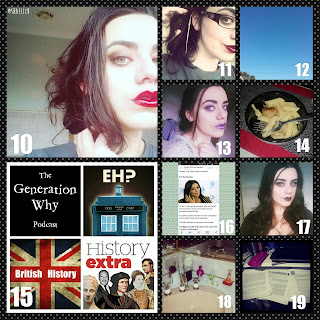 The inspiration for this was that I was trying to recreate a look inspired by Cruella de Vil, but it didn't exactly work out in time! All of the red eye shadows that I have are too orange-y.

11. Aahhh, I love @mariablackjewellery!! I'm always window shopping on their website, their jewellery is so beautiful to look at. I bought two of their ear cuffs (Nena and Roxy) last year and I love them. I long for the day when I can add more to my collection.

I love this set of ear cuffs so much, but I don't wear them very often because I am super paranoid that I'll lose them. If you're into minimalist jewellery (or what I think is minimalist), then Maria Black is well worth checking out.

12. This gorgeous blue sky (without filter) courtesy of Melbourne.

September is usually a really crappy month where the weather is concerned, but we had an absolutely stellar day!

13. When playing around with makeup takes HOURS and this is the end result. #donefortheday

I decided to have a real play around with makeup, and I was obsessed with getting the look I wanted just right. Does it always take so long when experimenting?

It's true, I'm a tough critic when it comes to food -- I'm no fancy cook, either, don't get me wrong -- but I don't say that a meal is good unless I think it's good. Pasta with chicken meatballs is a staple recipe in my brother's repertoire, and usually it's okay; he played around with the spices this particular time, and created something really, really good.

15. Podcasts have really taken off in the last 12 months, and today on the blog I have shared my favourites! Amongst them are these extra-special four: 1. Generation Why. True crime, mysteries and conspiracies. An all-time fave. 2. The Eleventh Hour. Doctor Who. Hilarious. The first one I ever listened to. 3. British History. They had me at British. 4. History Extra. Who doesn't love MORE history? The link is in my bio. Let me know which podcasts are YOUR favourite!

I am absolutely crazy for podcasts -- and you see all of my favourites here!

16. Just casually reading the odds about who's tipped the next #DoctorWho companion... Someone has tipped @kimkardashian at 500/1! I mean, it makes sense, right? She's taken over the world, naturally the universe is the next step. #strangerthingshavehappened

I find it hilarious that anyone tipped a Kardashian to be the Doctor's next companion -- but now I am absolutely convinced that a Kardashian reference is going to make its way into the next series.

17. Ahhhh, I can't wait until I can write the post that goes with this look! (I don't even look like me?) It's part of a series that I'm doing -- hopefully!

A series that, sadly, never came to fruition.

18. Somebody rearranged my perfume. I'd be ready to snap "DON'T TOUCH MY STUFF!" if it weren't so pretty.

It did look pretty nice.

19. So much highlighting to do. Where did my life go? #postgradlife

That was my life for the whole of September. Actually, it's been my life all year. 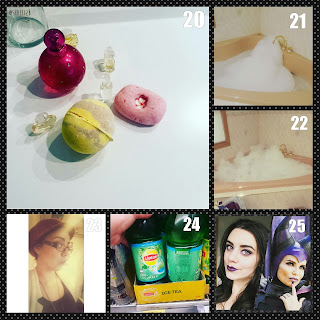 20. The last two weeks have been CRAZY!! I'm on placement, and I'm halfway through, but MAN it's taking up all my time! My poor feet feel like I've walked on a shredder, so I think a bath is in order tonight. The question is: which Lush product to use tonight?

Fast forward now into October, where it took over two weeks before I was able to post anything! This actually marked the start of a fantastic adventure, one that I know I shall never repeat.

21. I PICKED THE BUBBLE BAR AND I WASN'T SURE HOW MUCH TO PUT IN SO I TOSSED IN HALF AND NOW I THINK I MADE A MISTAKE.

I swear, I turned my back for five minutes and the bath water was covered in bubbles! The (arguably) unfortunate thing is that I take baths for my upper back and neck, so I need a lot of water -- and it was maybe three quarters where I needed it to be!

It wasn't even the flimsy airy bubbles that make up the bubble baths of childhood memories. It was like sinking into a sea of marshmallow foam.

23. It was raining this morning so I stole my mother's hat! Bye, Mum!

Usually I use a scarf to protect my hair, but I couldn't find it so I tuck it all into my mother's hat instead.

24. Um, excuse me, Lipton, we have beef. Wtf is this? Why is gross cucumber suddenly in tea form? AND WHERE IS MY DELICIOUS, DELICIOUS DAIQUIRI TEA?!

I mean, I know that it *said* 'limited edition' but it's been on the shelves for a couple of years at least! It was the most delicious tea! Cucumbers are not delicious. Cucumbers should not be in tea.

25. "See, I'm just trying to teach you the thing that really counts: how to be me." If you're looking for some last-minute inspiration for Halloween, I created a look inspired by Kristin Chenoweth as Maleficent in Disney's Descendants! It was time-consuming for me (#thosepadawanskillz) but simple in technique! #probablytoolastminuteforaustraliasorry

I worked so hard to try and get this look together, but wow, what a time-consumer for me! It needed so much layering, but I feel that doing more research and finding different products would help cut down the time.

And just like that, that's all that I've been up to over the last two months on Instagram! I'm looking forward to hopefully going to squeeze in a few extra blog posts, but it's going to be a mad month: I've just submitted one assignment, and I have another eight to do!

Email ThisBlogThis!Share to TwitterShare to FacebookShare to Pinterest
Labels: Life Through a Filter, lifestyle