I think Bellabox are undergoing some troubles at the moment. Late March rolled around and the March box still hadn't arrived on anybody's doorstep. I hadn't been particularly concerned, but then I'd forgotten that it was something that was supposed to arrive (the Padawan Curse strikes again). My personal theory is that perhaps Bellabox were having issues with companies to supply samples of products; I can't think of any other reason why a) the box would be so late, and b) the box would still have such a relatively small value. I'm not saying that I need all high end all the time, but previous boxes have been worth around the $50 mark, and mine was worth half that -- others, even less.

The theme of March's box was #Selfie -- something that I can always get behind, given that it's something that nearly every blogger does. I think all of the products in the box were selected with the idea of achieving the 'perfect Selfie', and a lot of fuss was made about two particular brands: Stabilo and Colour Theory.

Let's take a peek inside the box, shall we? 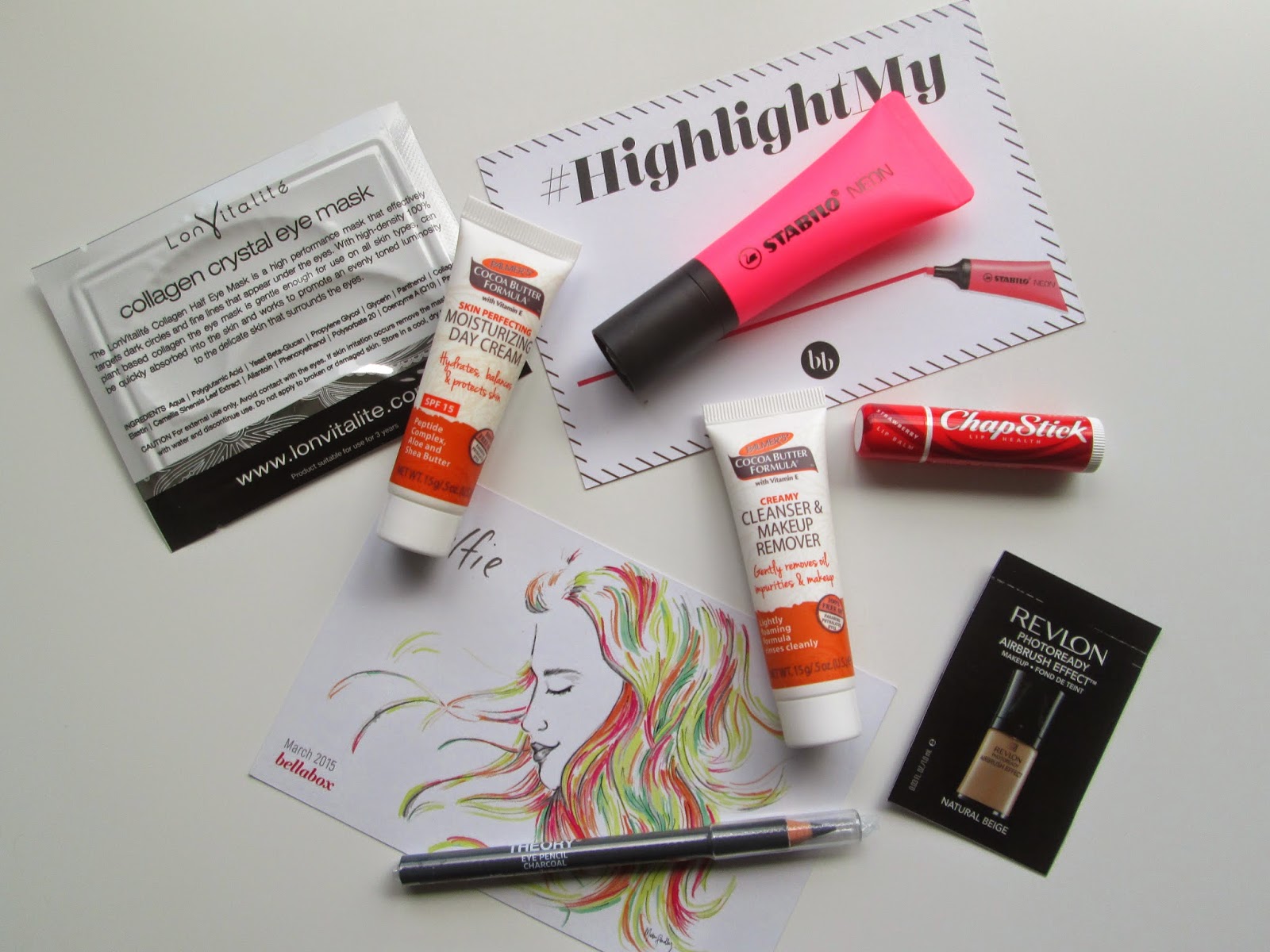 Lonvitalité Collagen Crystal Eye Mask || The most expensive item in the box, this product is an eye mask that is meant to target dark circles and fine lines. While I'm glad that Bellabox gave me an item from a brand I hadn't heard of before, this isn't a product that I really need, so I'll be passing it onto my mother. A six-pack of these costs $32, and I got a packet of two worth $10.67.

Palmer's Cocoa Butter Formula Moisturizing Day Cream || I feel as thought Palmer's is a brand that gets featured quite often, but that could be my imagination. I don't usually get excited by any of their products, but I have been using day creams more and more frequently, so I'll be sure to give this a go. I'm not sure if it's going to beat the incredible Neutrogena moisturiser that I got in February's box, but hey, you never know! A 75g tube retails at Priceline for $14.99 and I received a 15g tube worth approximately $3.

Stabilo Neon Highlighter - Pink || I could hear all the question marks in the air when I earlier mentioned Stabilo as a brand name that got a lot of attention. I think many people were confused about the inclusion of a highlighter in a beauty box, but Stabilo were sponsoring a competition run by Bellabox, so... y'know, I guess having a product in the box was to be expected. I personally don't mind, because I use highlighters all the time (although, I can't lie, I was kinda hoping I'd get a yellow one!). I think I actually prefer this design to the original, too, because I remember that the old ones used to occasional hurt or cramp my hands if I was highlighting  documents for a long period of time; this new one seems for ergonomically friendly. These highlighters apparently retail for $1.60 each, but I can't seem to find them for sale anywhere.

Palmer's Cocoa Butter Formula Creamy Cleanser & Makeup Remover || This is something that I will definitely use, especially as my favourite cleanser has run out and I'm trying to get through my samples before I buy anything else. I find that these products don't always remove all of my makeup, however, so it'll be interested to see how well this one measures up against the rest.  A 150g tube retails for $9.99, and I received a 15g tube worth around $1.

Chapstick Strawberry Lip Balm || Are Chapsticks a regular occurrence in beauty boxes, or is it just me? I have enough of these to last me a lifetime -- I bought a 3-pack tin the other week, erroneously thinking they were Lip Smackers (Shae, you moron) -- so I'll be passing this onto one of my brothers. I received a full size product worth $3.99.

Colour Theory Eye Pencil - "Charcoal" || This brand got pushed a little bit in emails from Bellabox, and I'd been slightly underwhelmed when I took my eye pencil out of the box; I'd been hoping for one of the more exciting colours in the line. Still, Charcoal is a really soft light pencil grey -- not the black that I'd thought it was -- and it takes a little bit working with for the colour to show on my lower lashline. These are worth $4 exclusively from Amcal pharmacies, and I got a full-sized product.

Revlon PhotoReady Airbrush Effect Makeup - Natural Beige || This was a little bonus sample, which might be a nice way to try new foundations, but I think that the colour might be a little dark for me. I won't know until I try! A 30ml bottle is $35.95, and my sample had 1ml that was worth $1.23.

Overall, this box was more underwhelming than disappointing. The value of previous boxes has been almost double this, and I know that other people have received more samples in their box, but have had a lesser overall value. Bellabox have also started to charge an additional $2.95 for shipping (it was previously free), which I know will be a turn-off for some people -- but I'm hoping to see some kind of qualitative increase because of it.

Or, at the very least, no Chapsticks for a while.

How did you go in this month's Bellabox? Have you tried any of these products?

PS. Don't forget that there are still a few days left to enter my giveaway, but hurry -- time's running out!
Posted by Shae Barry at 20:42