Finally, back to a semi-normal schedule! I tried out something new this week, although when I thought about it, I wondered why I really needed a recipe after all. Beef & Cheddar Pastries. It sounds easy enough -- and it is. I did my usual thing where I doubled the quantity to make a double batch, but I don't think anyone was feeling particularly hungry because we ended up having leftovers! Delicious, delicious leftovers... Excuse me while I go and heat up my lunch.

The great thing about this recipe is that it includes three kinds of vegetables that children tend to hate -- carrots, eggplant and zucchini -- but they won't be able to tell. At the moment my house is going through a "culinary phase" where we try to finish off everything in the freezer/fridge/pantry and buy as little as possible -- this meant that we had neither eggplant or zucchini, so it's not in the version that I made. Either way, eggplant in my opinion is rather like mushroom -- there's no discernable taste -- and I imagine zucchini to be much the same way.


I will definitely make this recipe again, as it's very easy and not hugely time consuming, but there are a couple of things I might change. This is essentially just a beef sauce with cheese on top, so I think it's quite versatile in how you present it -- personally, I think I'd like to try it as a pie. 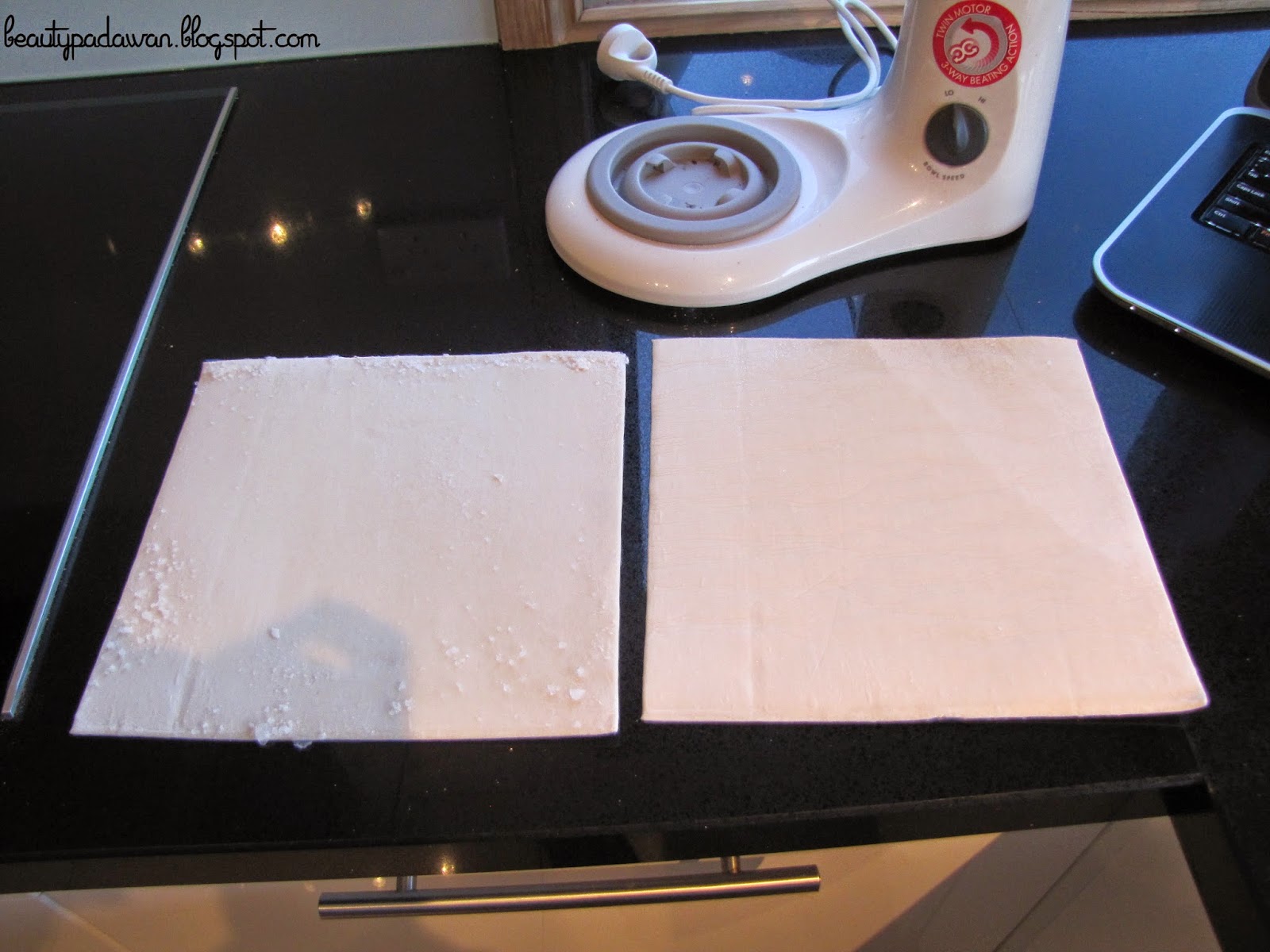 The first thing you need to do is take your puff pastry out of the freezer. I doubled the original recipe, so I took out two, but in hindsight I probably could've used another. You need to let the pastry defrost, but it doesn't take long.﻿ 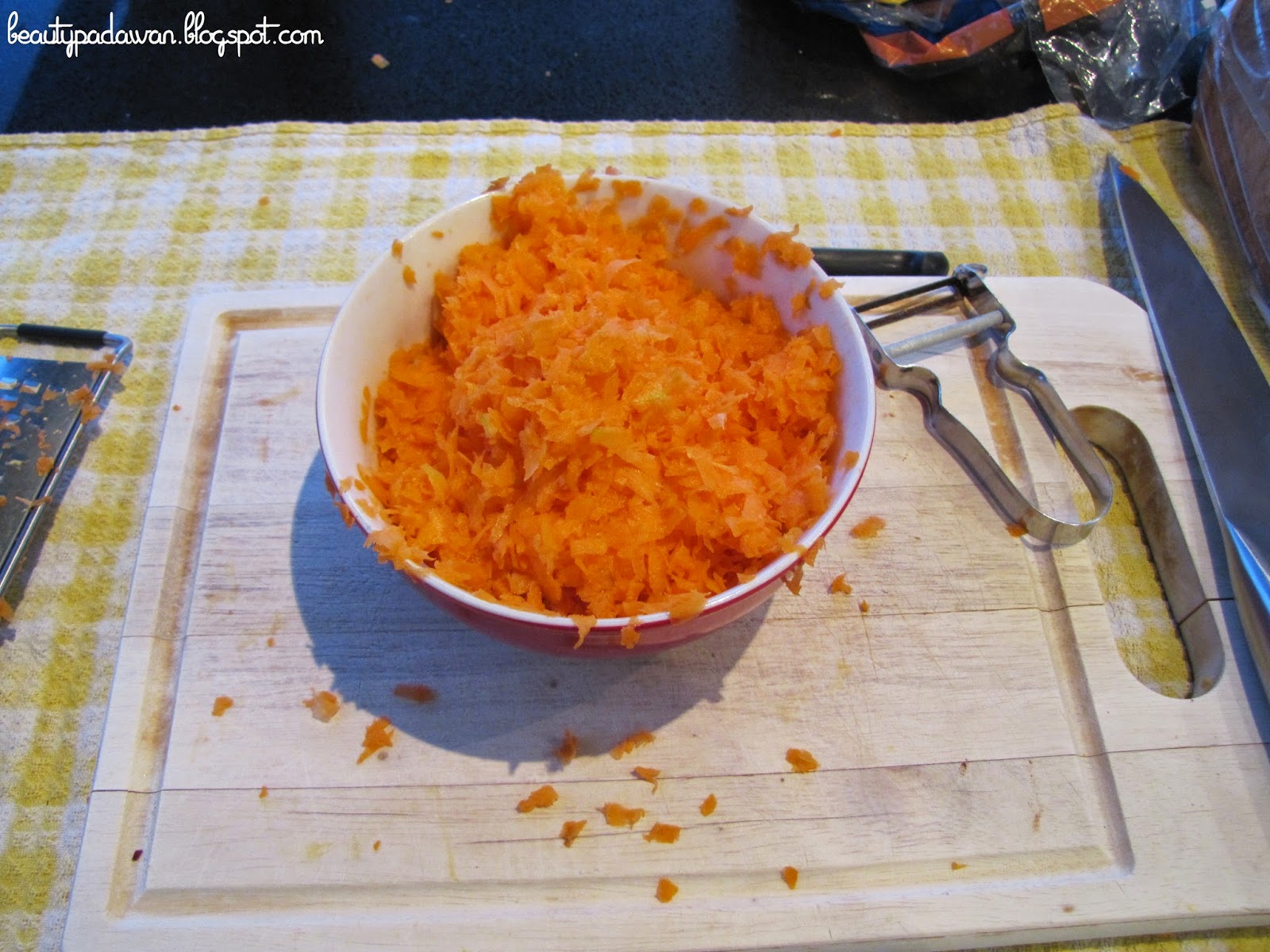 While you're waiting, preheat your oven to 200 C/390 F, then grate your carrots -- two of them. Don't forget to get little annoying bits of carrot all over your chopping board! Now is also the time to grate up your zucchini and chop up the eggplant, if you're using it. Make sure you use a fine grater: this is the key to not letting your little ones catch on about the fact they're eating vegetables. 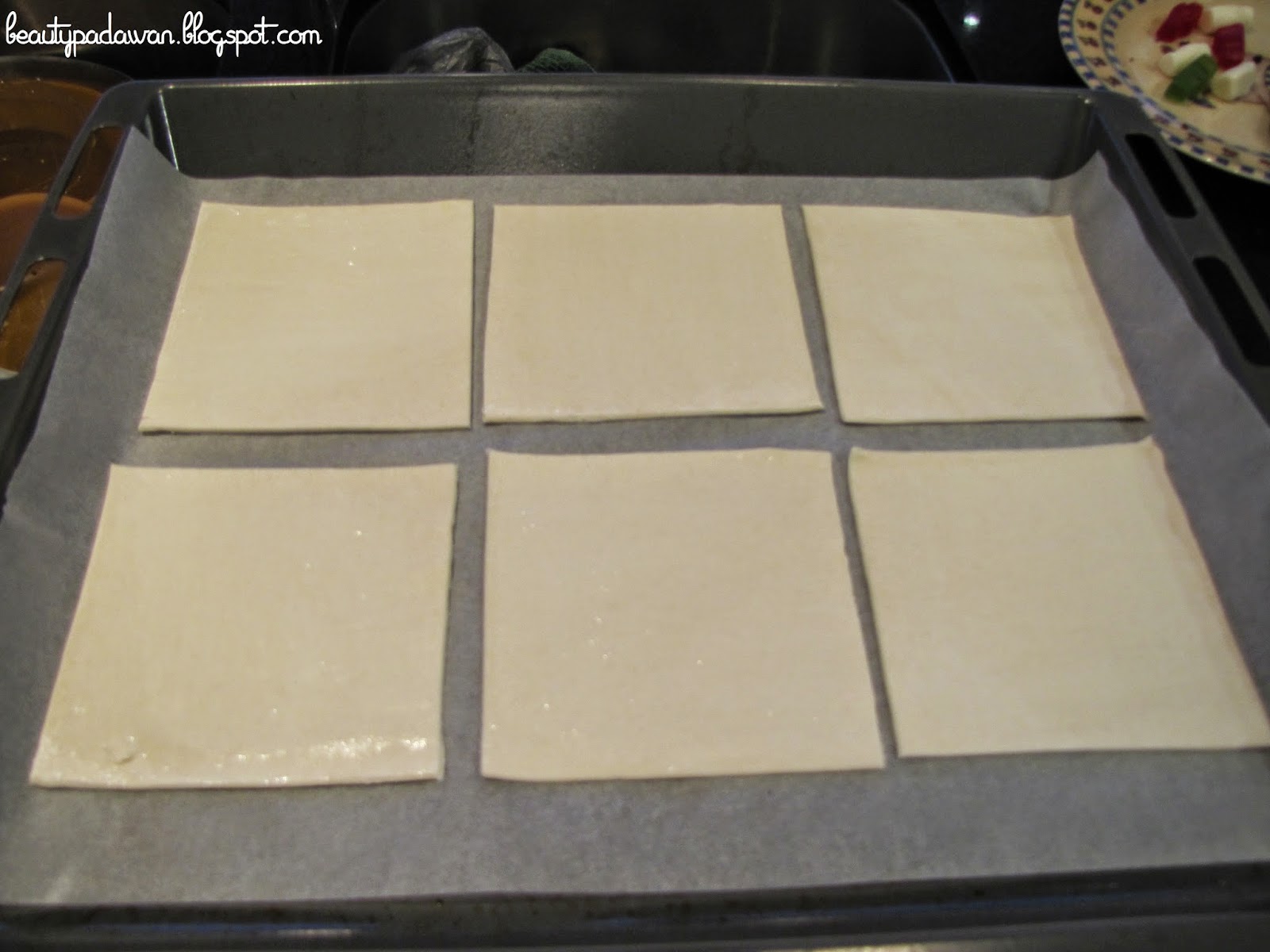 By the time you've finished the veggies, your pastry will have defrosted. Cut them into four squares, then lay them out on an oven tray with baking paper on it. Pop it into the oven for 15 minutes -- do one tray at a time if you're working with more than one. 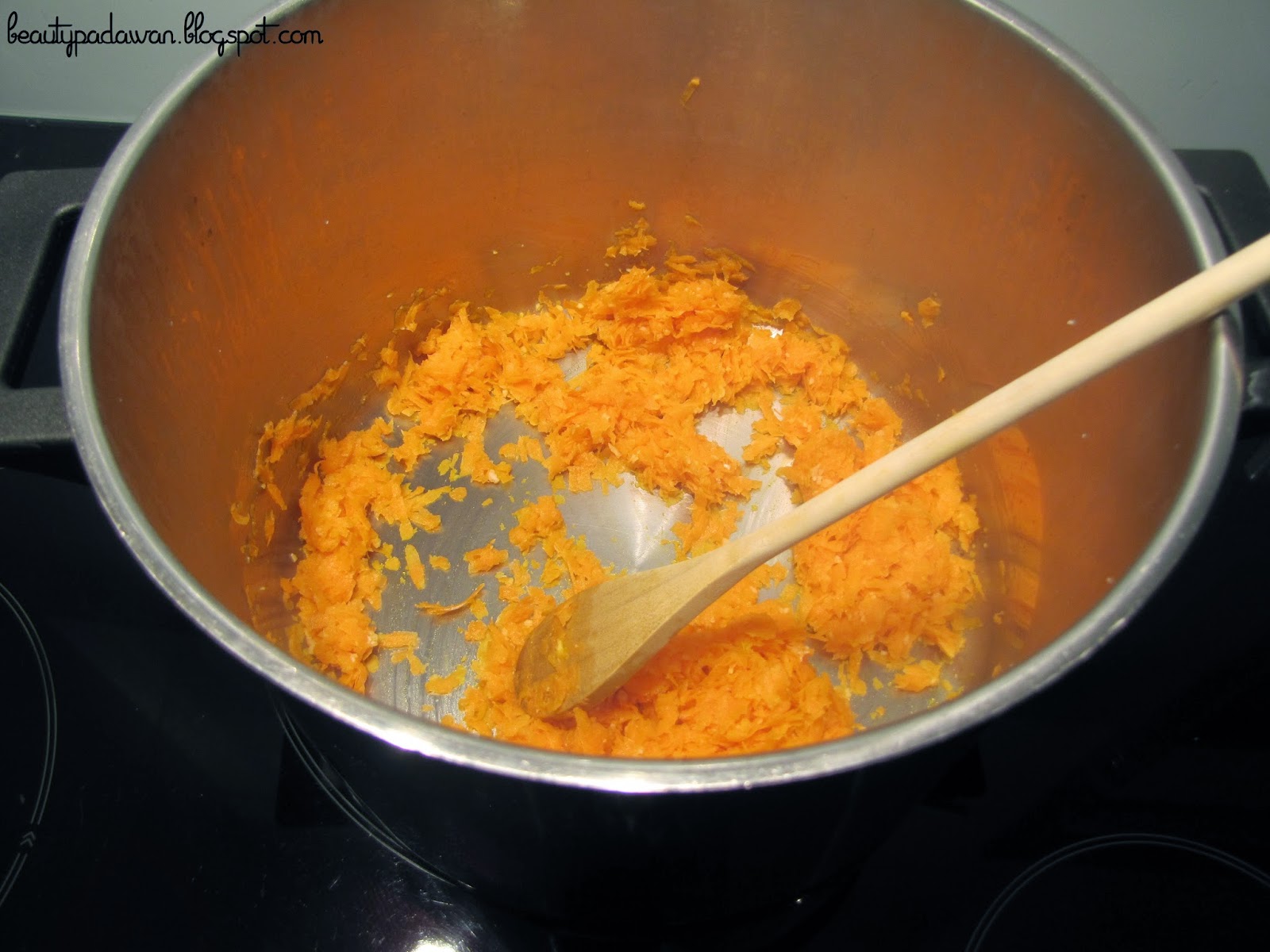 While your pastry is puffing to perfection, give a large pot a nice splash of olive oil, chuck in your vegetables and a couple of teaspoons of minced garlic. If it smells weird, yes, it is supposed to do that. That's the smell of carrot frying and I've decided that I don't like it! 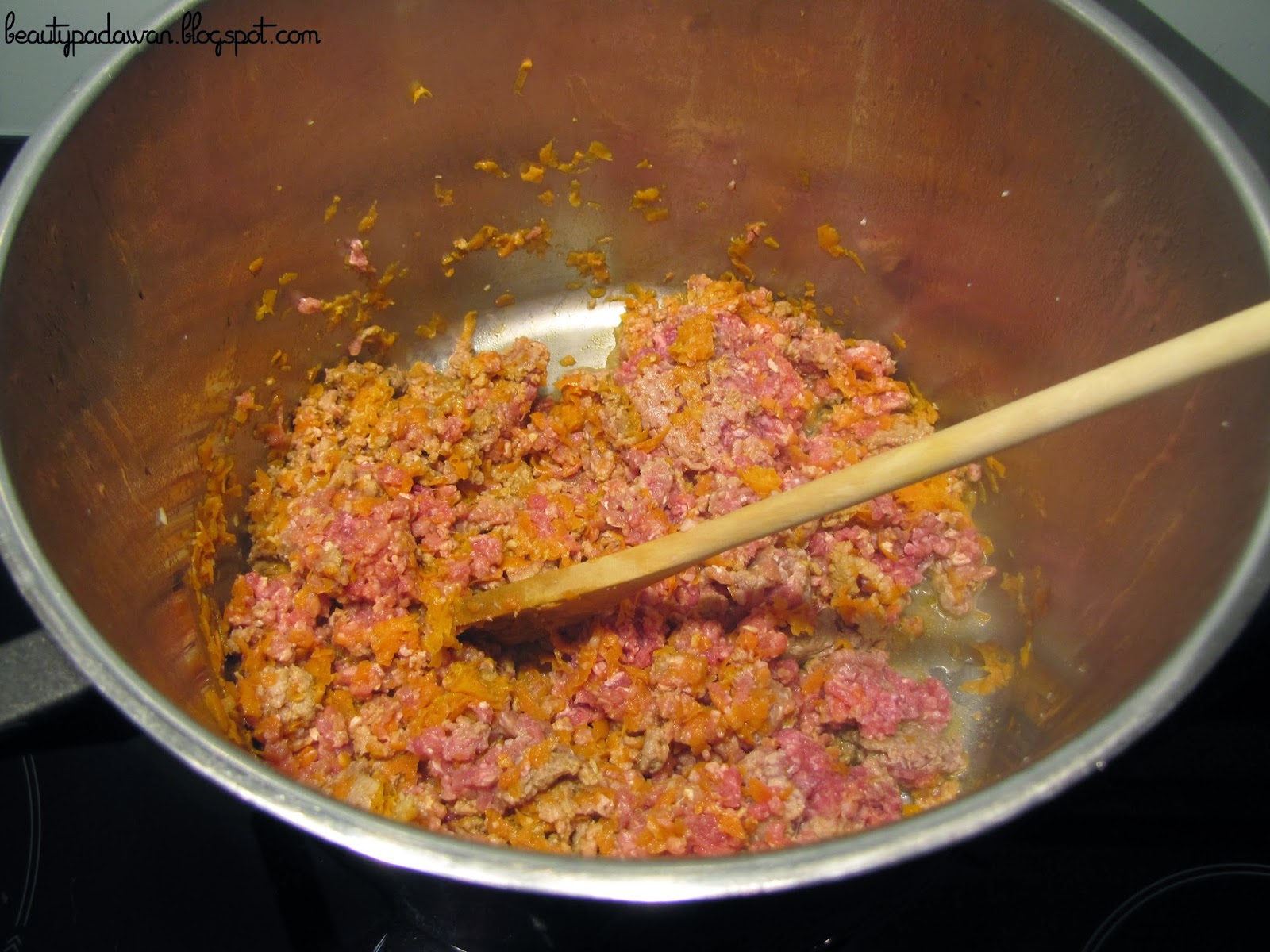 Throw in your beef -- I used a kilo -- and cook it with the veggies. The carrot will turn it slightly orange in the process, because that's what carrot does best, but it means that the carrot will be harder to spot later on. 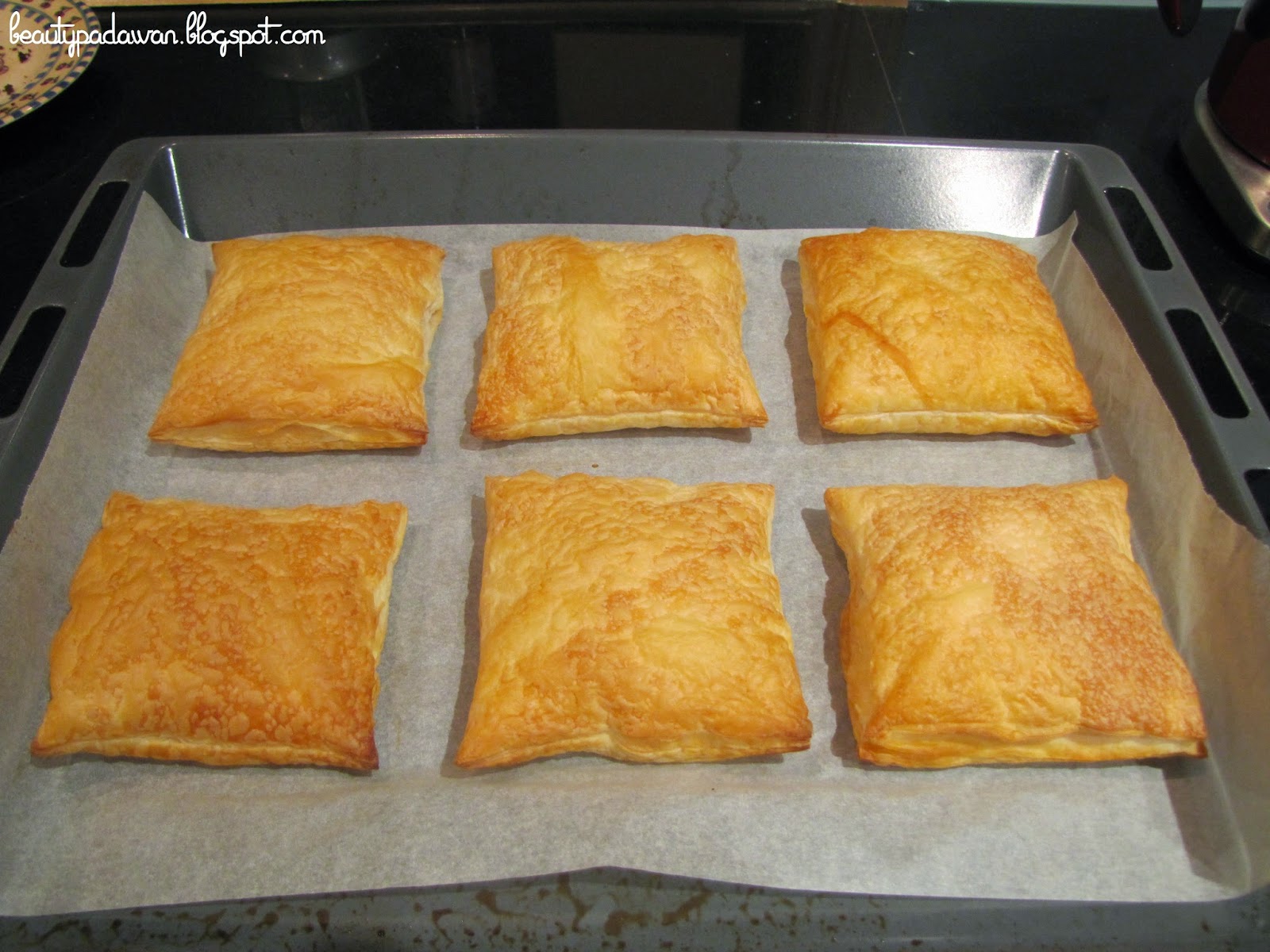 Meanwhile, your completed puff pastry squares will look like something out of a high-end restaurant... 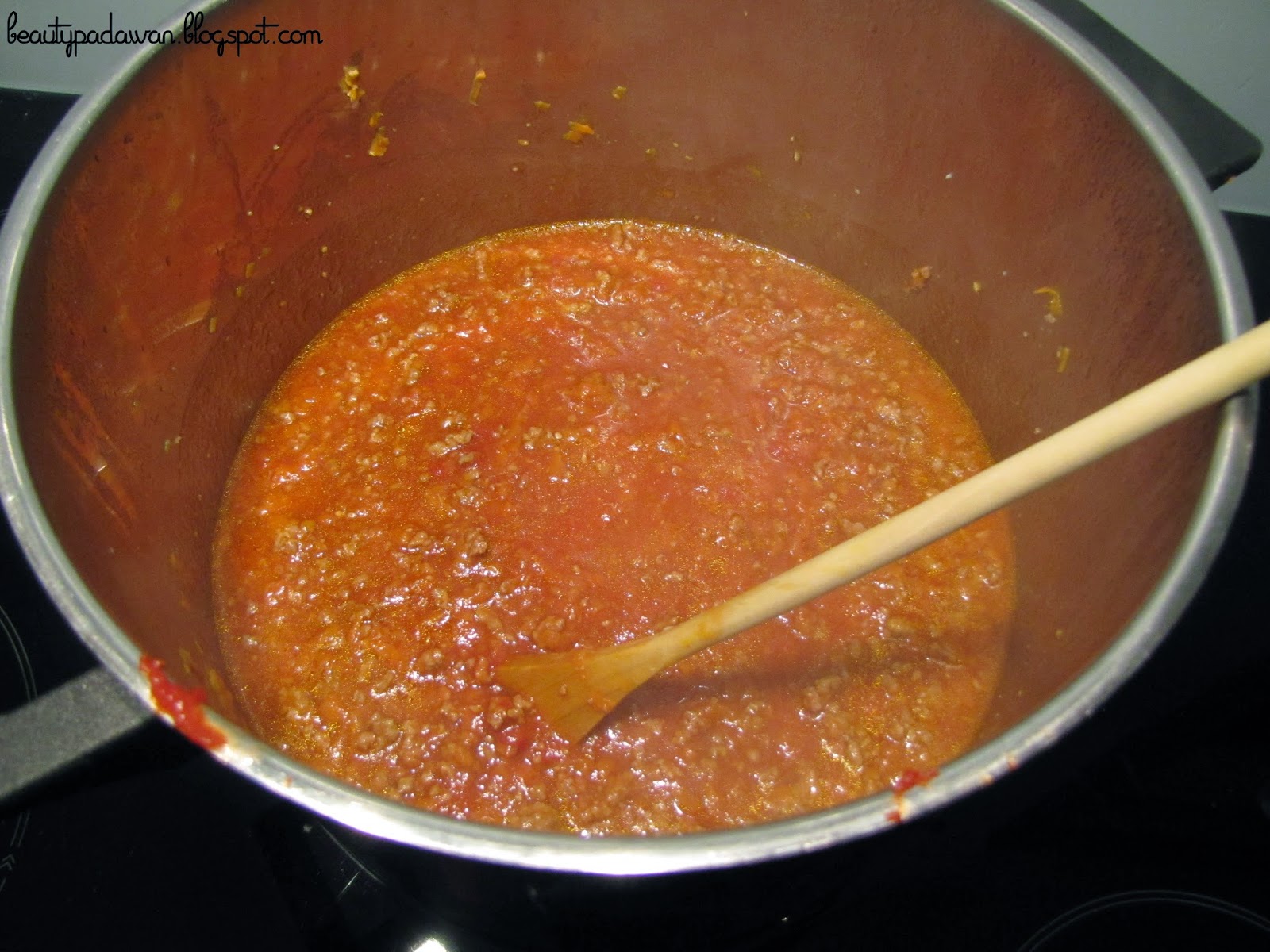 ...and then you can get back to the sauce. The recipe calls for diced tomatoes, but we don't eat tomatoes, so I used passata instead. In doubling it, I would have needed over 800g, but a standard bottle holds less than 700g. I debated about whether or not I should use two, but then that was significantly more than what I needed. In the end, I decided to use one jar, fill it about halfway with water and add that in, then throw in a whole can of tomato paste. It will be very watery, but don't worry about that -- it will reduce down. So, you'll need to adjust the heat on your stove to High, bring it to the boil, then turn the heat down and let it simmer.
I let the sauce boil for several minutes before I turned the heat down, because there was so much water. Occasionally I'd give it a good stir to make sure that nothing got stuck to the bottom. 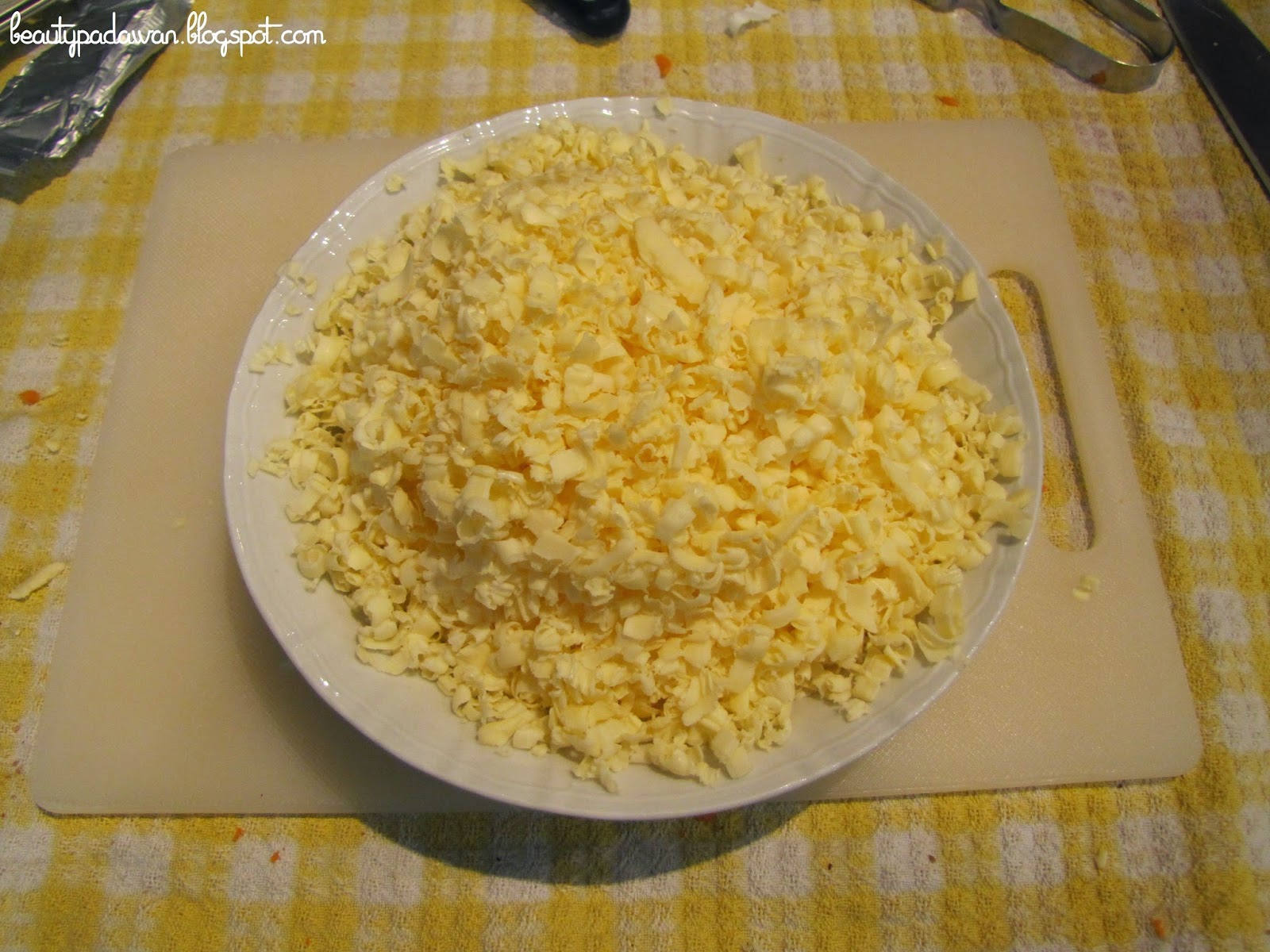 Cheese. One of the two most important ingredients. I used a fine grater for this as well, but you're able to use whichever kind you like -- heck, buy a different cheese, already grated. Cheddar can sometimes be on the pricier side, so there's no reason why you shouldn't use something else if it suits your budget. 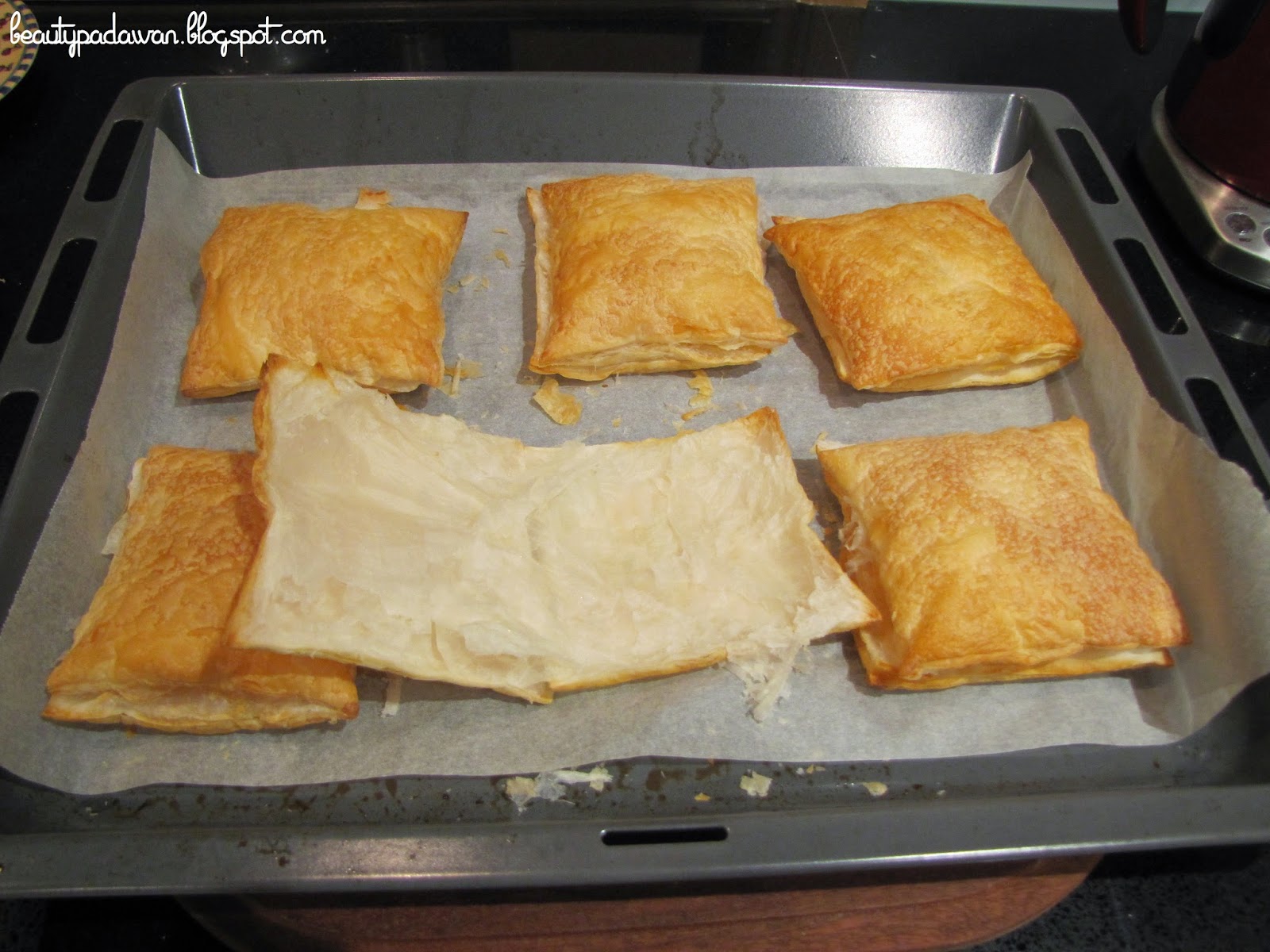 When I was first reading this recipe and it said "split the pastry", I was really confused. I had no idea what they were going on about! It obviously became much clearer once the pastries were cooked that I needed to cut it like a roll, so I did just that, with a serrated bread knife. You probably don't need a bread knife for pastry, but I love any excuse to use it. 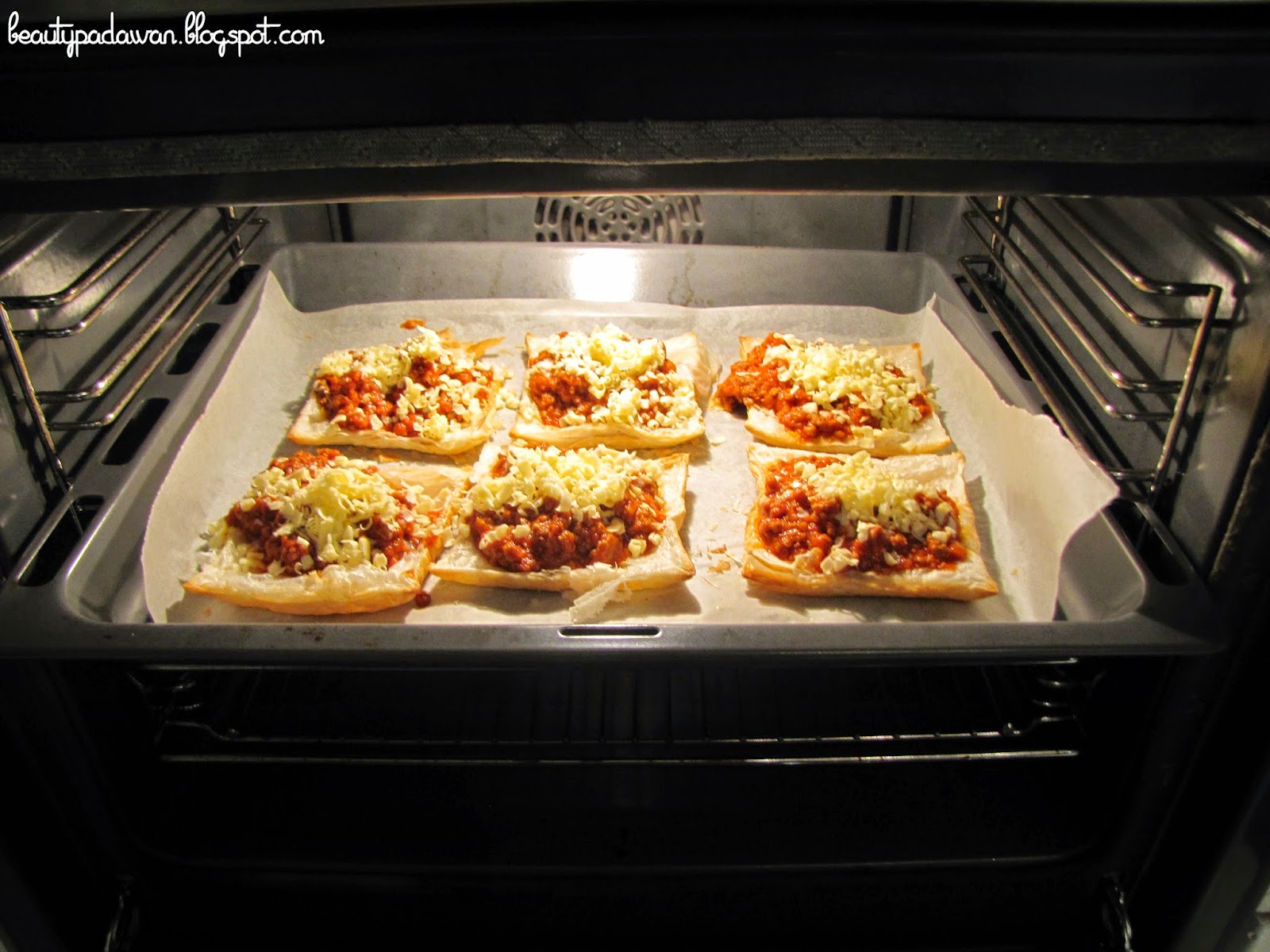 Ladle some of that delicious sauce onto the bottom half of the pastry, then put a nice dollop of cheese on top. They need to go back into the oven, but the recipe doesn't state how long for -- so I kept the temperature at 200 C/390 F and kept an eye on it to make sure it didn't burn. Three or four minutes seemed to do the trick, just until the cheese melts.
Place the tops of the pastry squares on it and dish it up. Voila, a messy dinner is served! The meat sauce was surprisingly tasty, given the lack of herbs in it (I do love to herb it up) and the cheese was delicious and soft. The pastry at the bottom did go a little soggy, but I'm not surprised -- a) it's puff pastry, and b) I'm no MasterChef!
If you don't have pastry in your freezer -- or if working with it scares the bejeezus out of you -- this would go nicely on toast, or in a huge pillow-soft roll. I want to experiment with it and turn it into a shortcrust pie, because I think it would be a huge success -- but obviously with more cheese!
This recipe came from the November 2009 issue of Australian Good Taste magazine, but you can look at it online. I have included the original recipe below.

And that's it for these delicious pastries! Would you try these out?
Sarah xo
﻿
Posted by Shae Barry at 13:18