I seem to set myself a new record for publishing these posts late, but it's that time of year where studying has to trump all hobbies! My schedule is chock-a-block for the next month, so, sadly, late posts may continue for a little while.

I was supposed to make corn fritter patties or something along those lines, but in the spirit of not having enough time, I instead reached for good old pasta. This sauce can be used in a number of ways: stir-through, lasagne, cannelloni -- if your pasta needs a tomato sauce, this is the recipe I go to. It's kind of my own concoction: lasagne is one of the food groups in my family, so I've played around with it until I got it to where I liked it.

It's great for students and families alike -- you can add whatever you like to it, be it meat or vegies or cheese, or you can keep it plain! This is a basic staple recipe which I think everyone should know, and it may seem a little silly to the cooking aficionados (after all, what's wrong with a jar of Dolmio's?) but with this you know exactly what's in your food, and you'd be surprised just how few people know how to make a basic sauce. Unfortunately, I cook this "the wog way", meaning that I don't really have many measured ingredients -- I kind of just chuck it in!

This should be enough sauce for a family-sized lasagne. I used ravioli for this (over 1kg of it) and it was the perfect amount. I'd say it makes about eight (8) serves, but it's easy to halve as you need. This sauce is also freezer-safe. 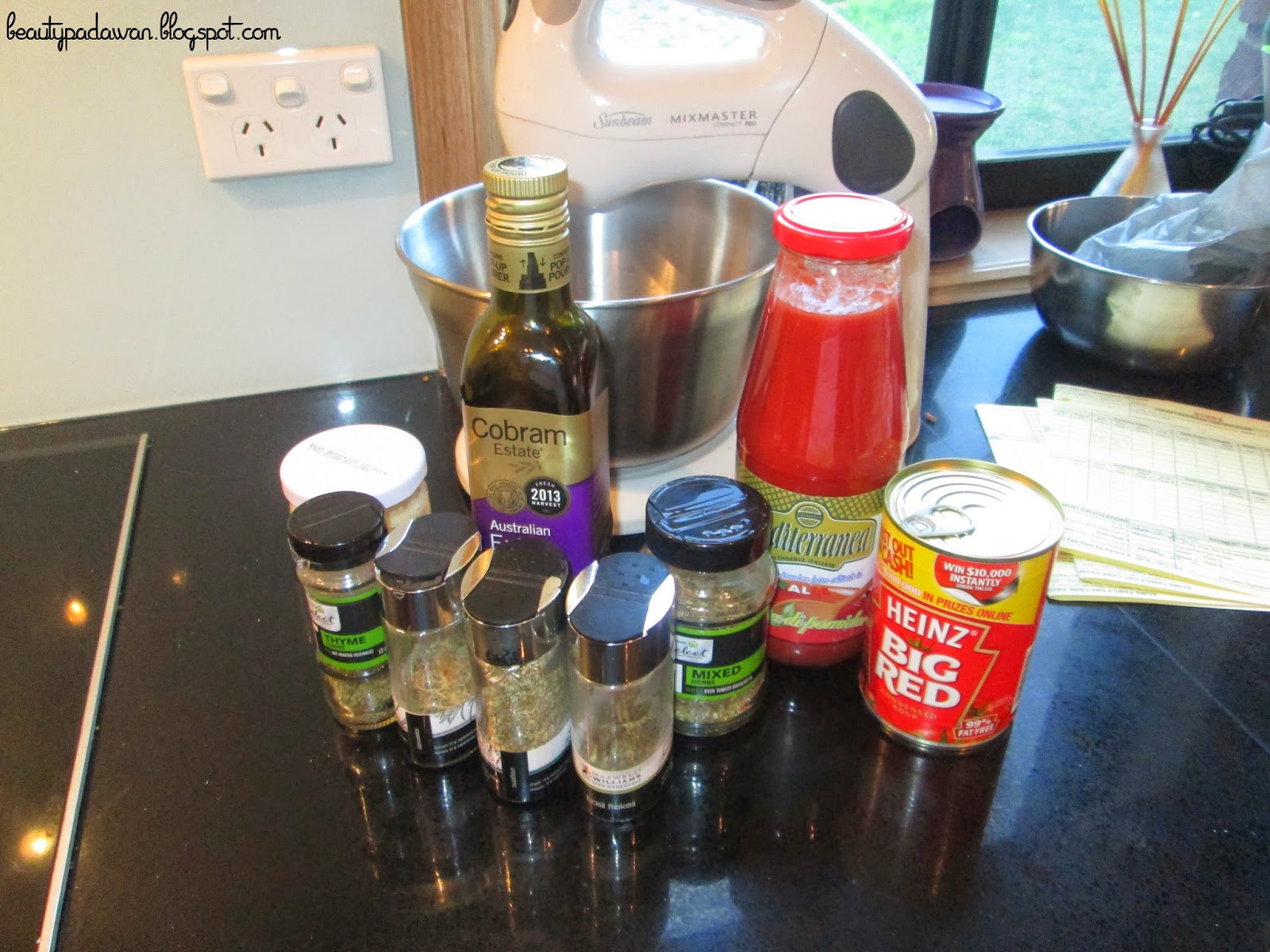 This is more or less what you're going to need. It's not exactly everything that I would use, but don't worry, the recipe I'll put up is what I would normally do. I would normally have two jars of passata, but there was only one in the pantry so I added a can of tomato soup (gross, but, y'know, whatever, it gets the job done). I would recommend using a passata (or soup) that has low sugar, as the sauce has more of a rich, tomato flavour. I don't like it to be too sweet, which I find can happen sometimes.

You can see my secret ingredients right there: herbs. I use thyme, oregano, basil flake, rosemary and parsley (or any combination that's available). If you want to use fresh herbs, definitely reach for fresh rosemary -- I find that it's flavour is more potent when it's just been stripped right off the stem. If you only have mixed herbs, that's also fine!

Also: garlic. You can never have too much minced garlic. 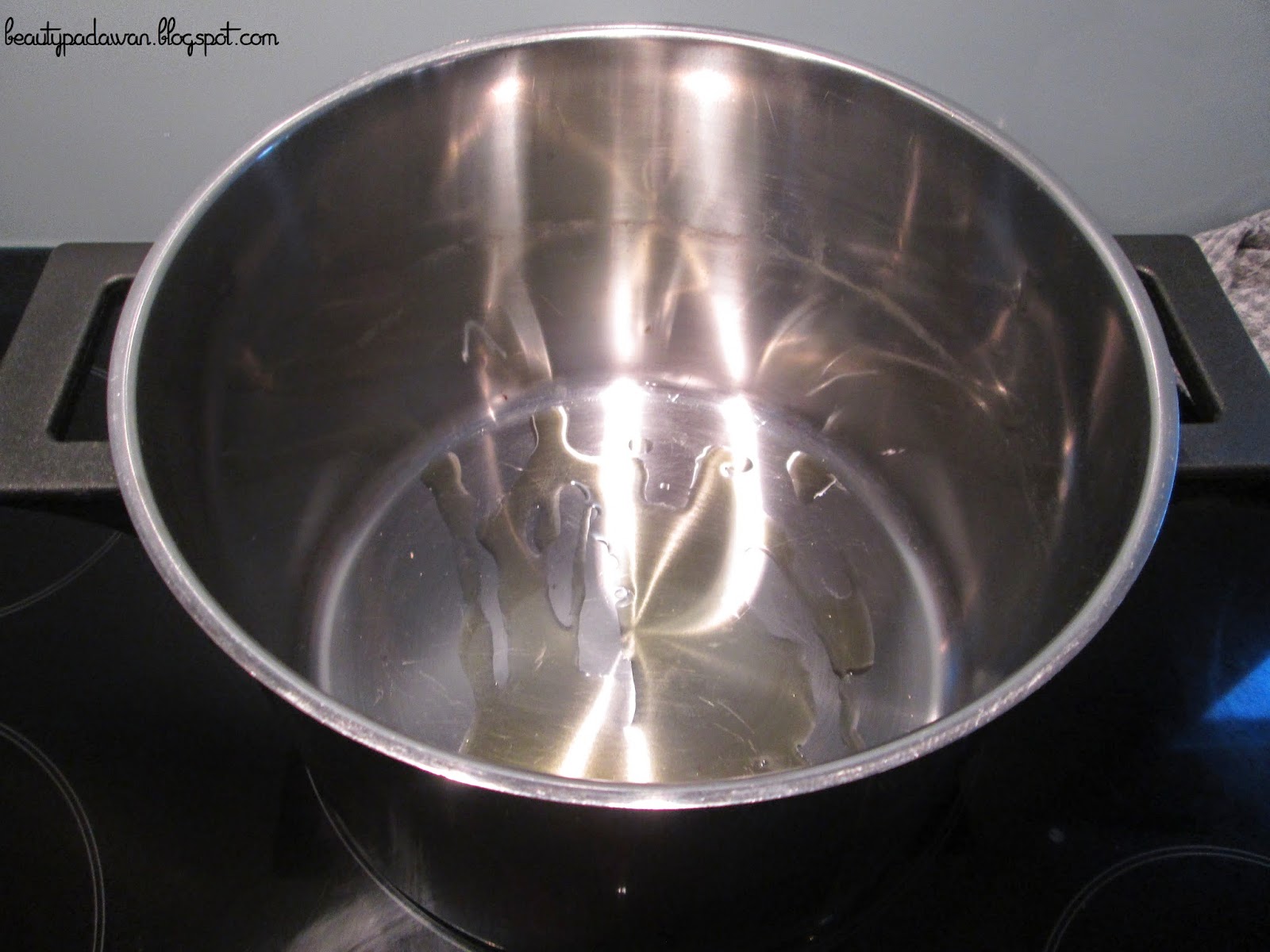 If you're going to add minced meat to this, now's the time to cook it. Give your pot a really good splash of olive oil, throw your meat in and cook it until it's browned. Vegetarian alternative: quorn mince and/or onions. I've never cooked with quorn myself, but I've heard you cook it the same way as you do mince. If you're going with onions, sauté them -- that is, cook them until they're clear and soft, but not brown. Throw in a teaspoon of minced garlic if you're feeling keen. 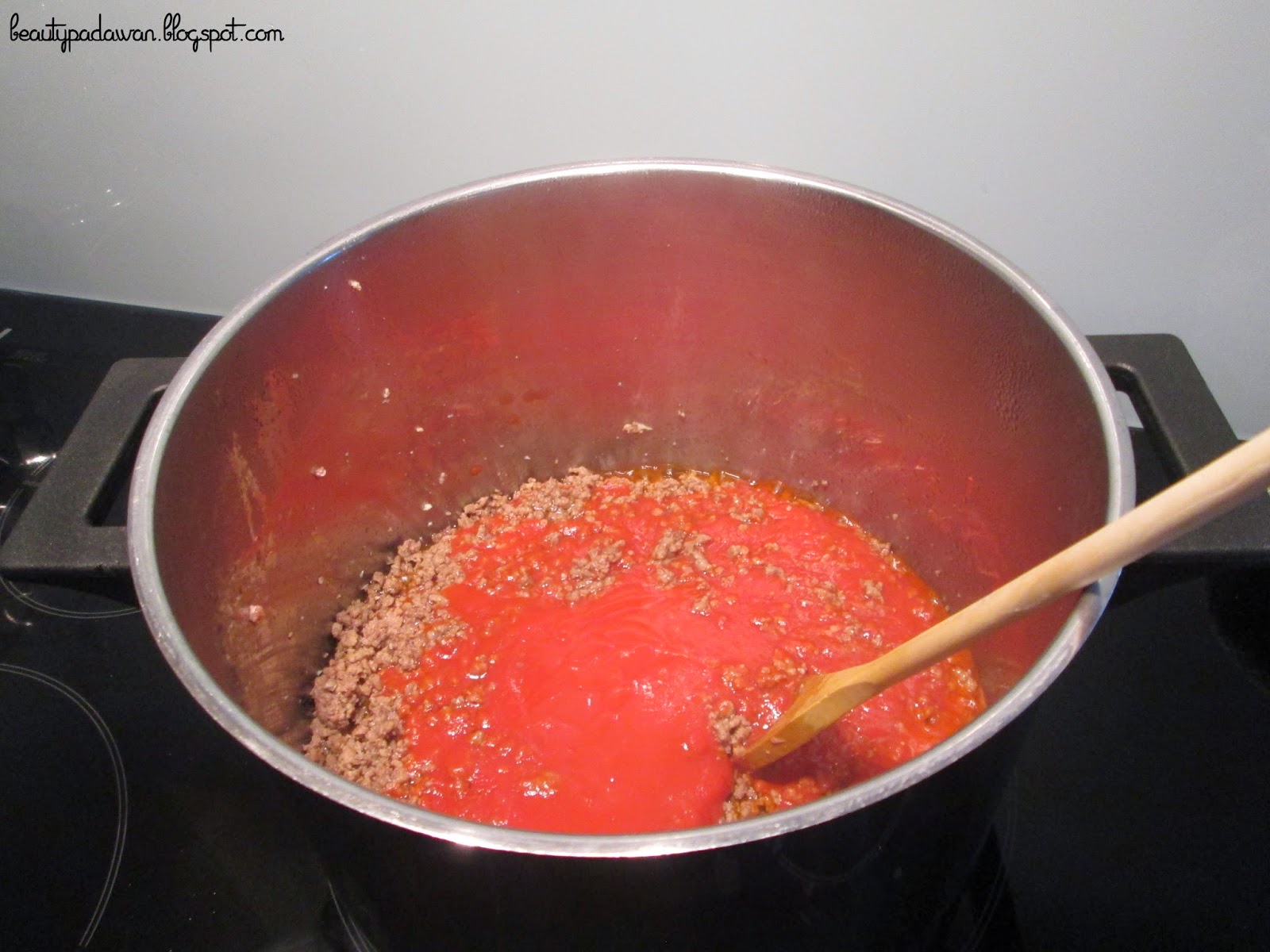 This is the part where you throw in your passata. Make sure to get the most out of every jar: fill it 1/4 to 1/3 of the way with water, give it a shake, and pour it into the pot. If you're using meat, quorn or onion, give it a good stir to make sure that it's evenly distributed through the sauce. If you're not, give it a good stir anyway, and exercise your arm! Then crank the heat up -- we wanna bring this baby to the boil. 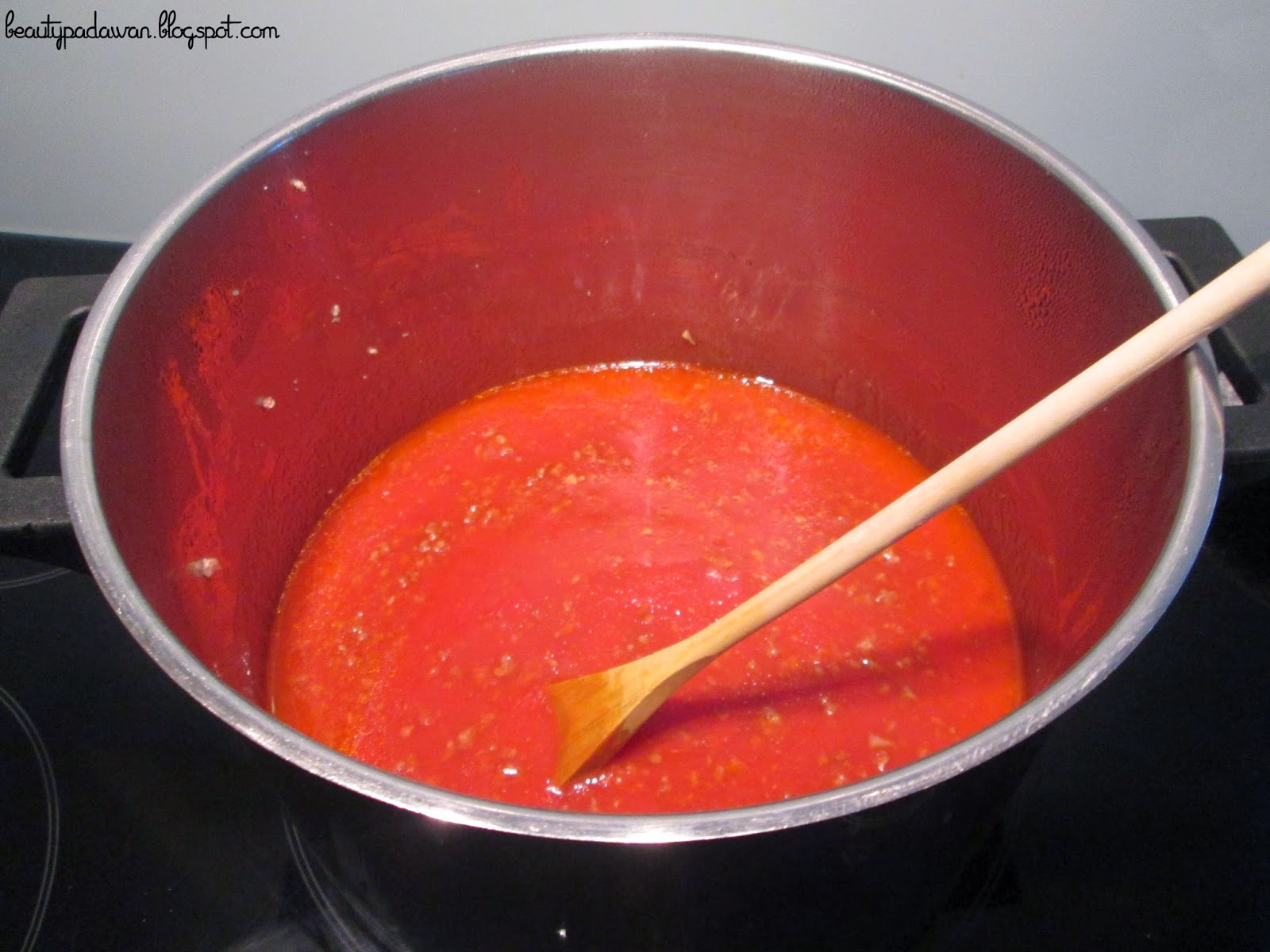 This part is my personal favourite: minced garlic. I lied, you can have too much garlic -- just not in this case. I like to throw in three or four teaspoons (sometimes a fifth for good luck) and then I keep stirring the pot. Of course, you don't need to add so much if you don't like it but with winter around the corner, you'll want to keep in mind that this helps keep colds at bay!

Tip: If you're not sure about how much is enough, go slowly with it. Add a teaspoon or two, then smell -- but don't simply stick your nose over the pot and sniff. Engage what I call "The Science Method": waft the steam from your tea towards your nose and you'll get a far better idea about how strong it is. Then, if you want more garlic, add more; if not, leave it. 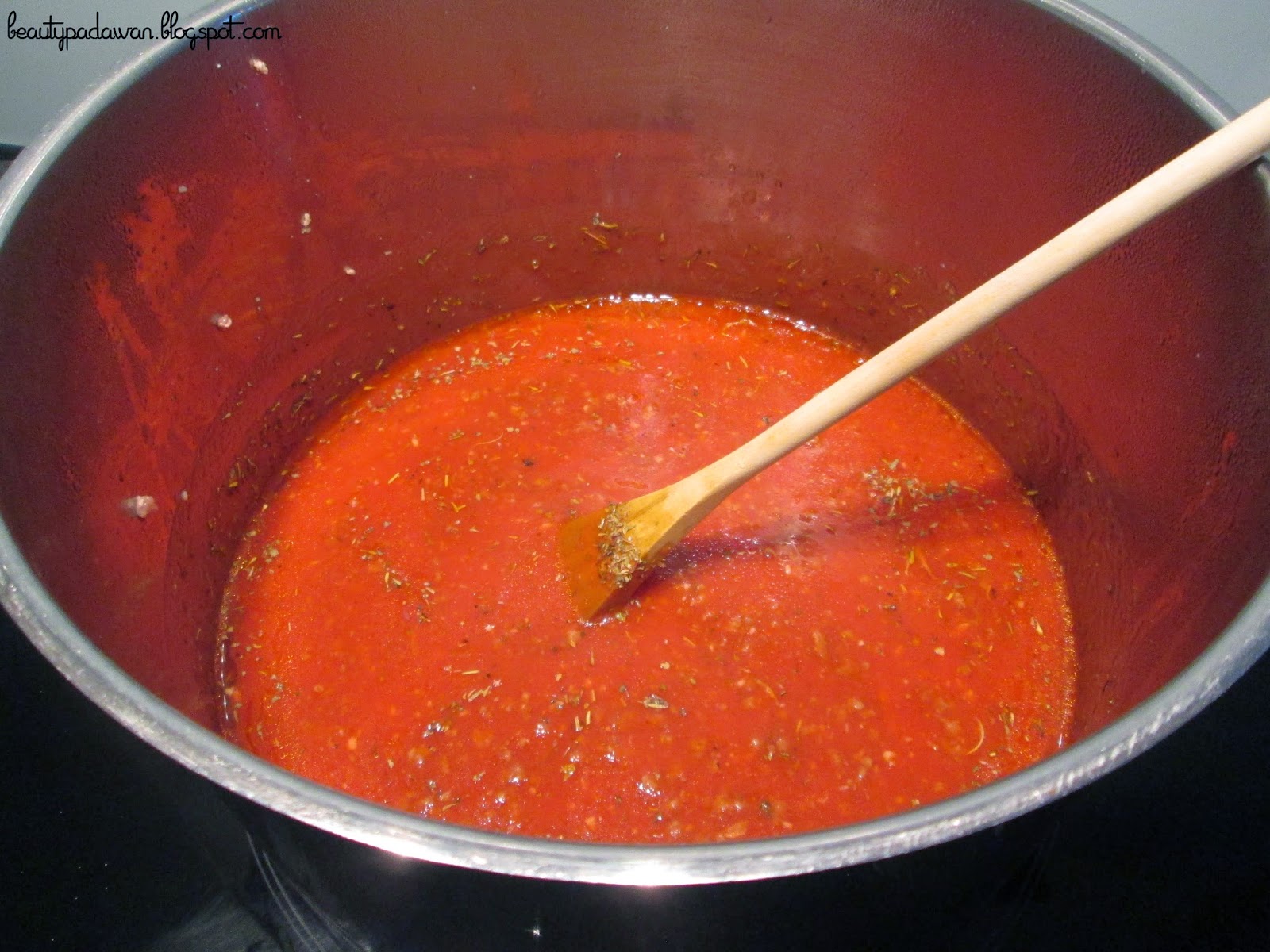 Now to herb it up! As I said earlier, I don't use any standard measurements. You've got two shakers on a herb jar: the sprinkle side and the danger side (called so because you can easily add waaay too much if you're unfamiliar with it and have a shaky hand). Of course, I like to use the danger side. Give it a nice shake, but, again, you don't want to be too heavy with your hand -- you can always add more later. Give the sauce a really good stir -- you want to be able to see the herbs. If it looks a little sparse, add a little more. Keep engaging The Science Method to moderate scent and taste. 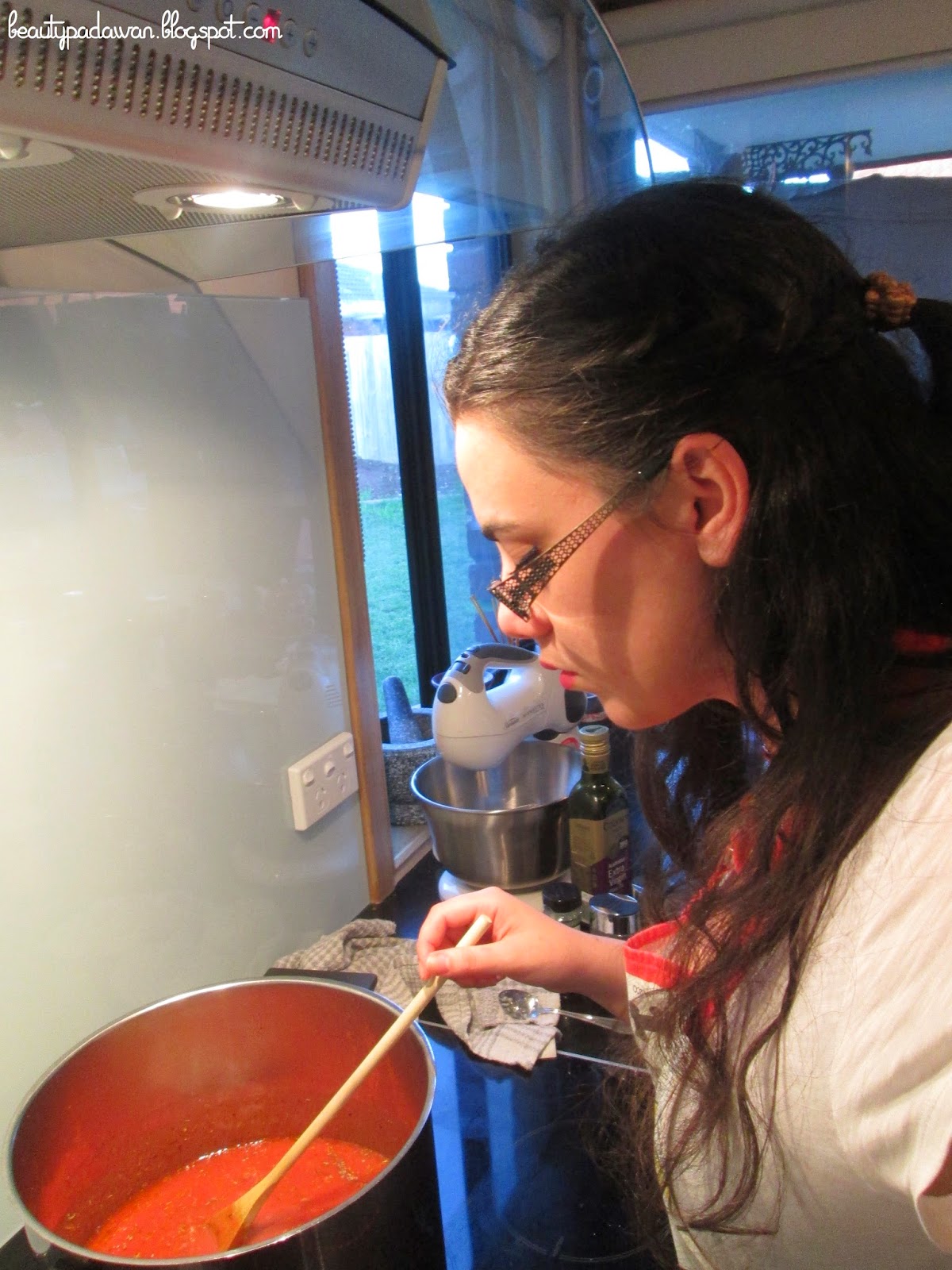 By now your sauce should have been brought to the boil. Once it has, turn it down to a simmer and leave it alone for 30 - 45 minutes, stirring occasionally to make sure nothing has burned. You can add some grated cheese at this stage, if you'd like! Just a little to start, wait for it to melt through the sauce, then taste. If you want to add some frozen veg to bulk it up, now's the time for that too. You'll definitely want to taste, to make sure that they cook through. 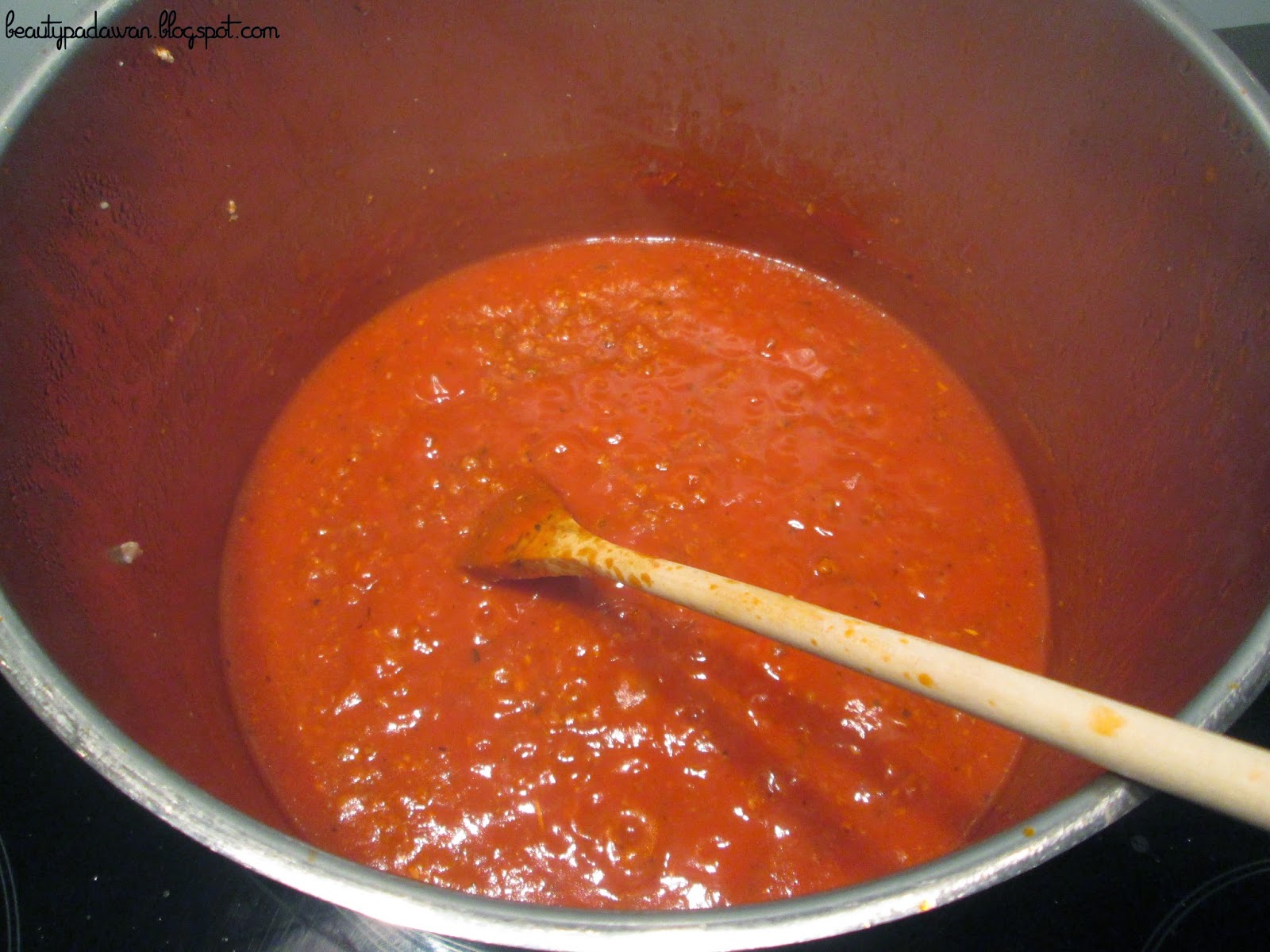 Eventually you want your sauce to look like a more attractive version of this. By simmering it, you're reducing the sauce and intensifying the flavour, and you want to keep doing so until (if you're using meat) it looks like a proper meaty sauce, or (if you're not using meat) the sauce looks deliciously rich and thick.

Is it too think? That's perfectly alright, you can just add some water (a little at time, in between stirs) until you get the rich consistency.

Of course, unless you're making lasagne, you'll have gotten your pasta cooking while your sauce was simmering away. I went for ravioli, which, like an idiot, I chose to cook in a pot that was too small.

And in true Sarah-style, I didn't end up taking a picture of my end dish -- I was so focused on trying to get dinner done so that I could get back to cramming that it completely slipped my mind!

Serves 8 (or enough for a family-sized lasagne)

What would you add to this sauce?