This review has arguably been a long-time coming -- the purchase of this palette, even longer. ﻿I've had the photos on my computer for a little while now, and this is by no means a new product from Too Faced. As far as I can tell, it was released over 18 months ago, so it's likely already a part of many makeup collections. It's heavy on the glitter, so it's not going to be everyone's cup of tea -- in fact, the reason why it took me so long to buy the palette is because I wasn't sure that I needed to have so many shimmery shades. 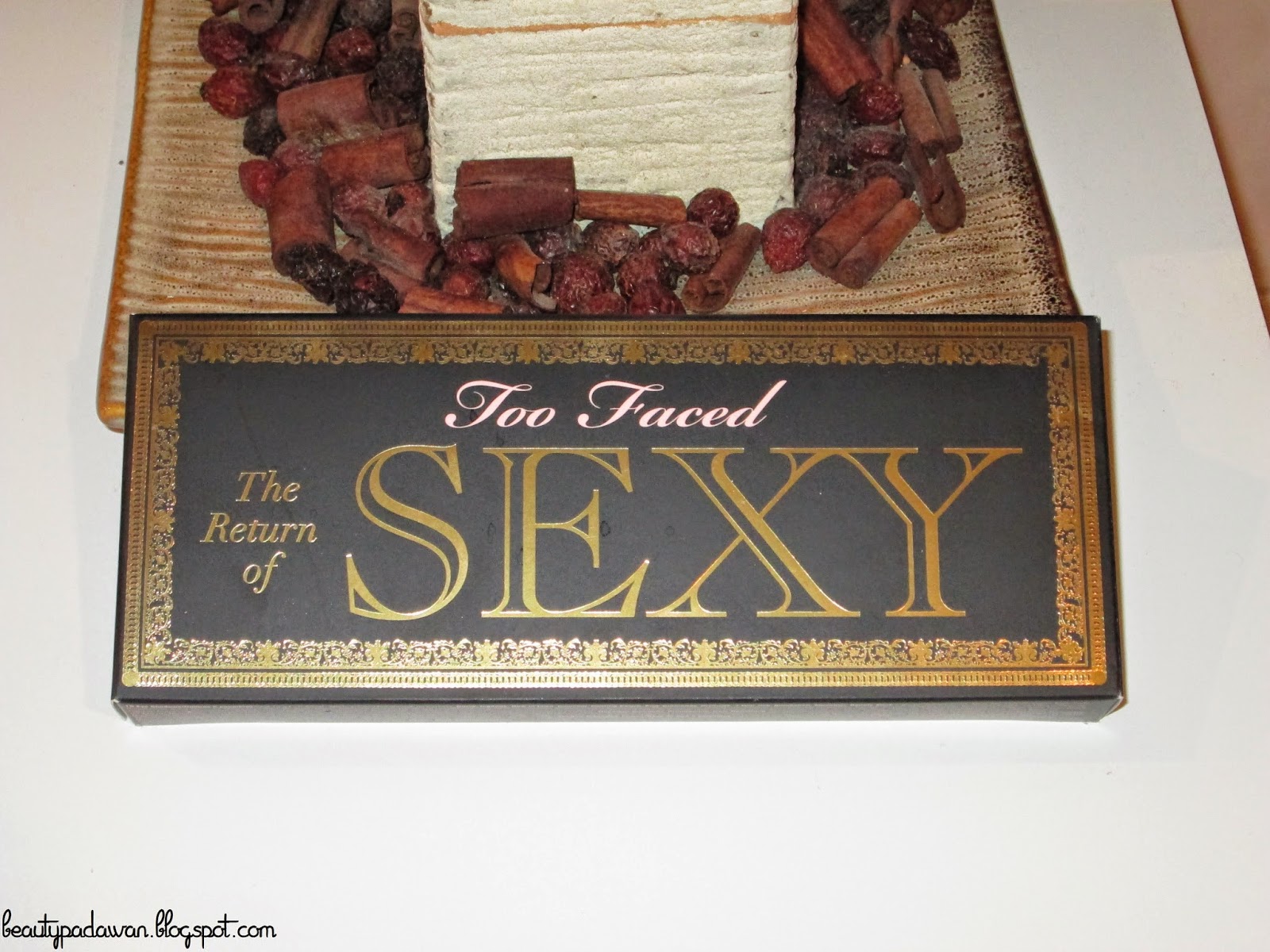 So this is the packaging of the eye shadow palette. As you can see, it's a matte black background with gold lettering and lacy trim embossed on it. Having the word 'Sexy' in such a large font really grabs the eye, suggesting the potential for bold, gorgeous, dramatic looks. 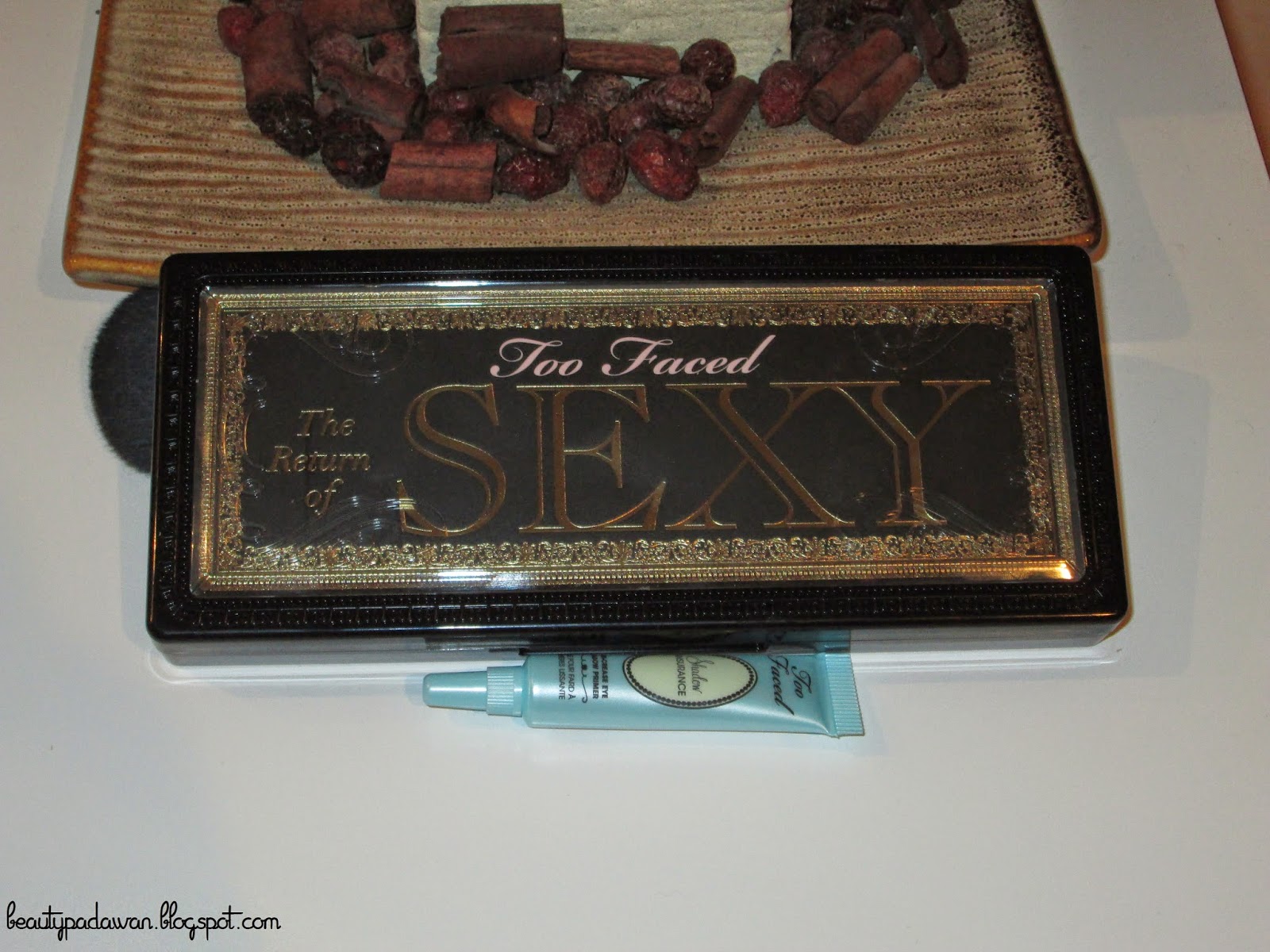 Taking the palette out of the packaging, I was surprised to find that there was a mini Shadow Insurance eye primer inside with it! I know that this is supposed to be a common occurrence with palettes coming from other high end brands, such as Urban Decay, but the Too Faced Chocolate Bar palette did not come with one, so this was like an exciting little freebie to me!
The palette casing looks the same as the box, except that it's made with a shiny plastic. The product name looks to be set behind a piece of embossed clear plastic -- I personally find this to be a little strange and jarring with my sense of aesthetics, but it's cute nonetheless. The clasp of the palette is more the traditional kind of clicky-clasp (Padawan term), as opposed to the magnetic kind on some of Too Faced's more recent palettes -- this will add some appeal for those who aren't sold on the security of the latter. 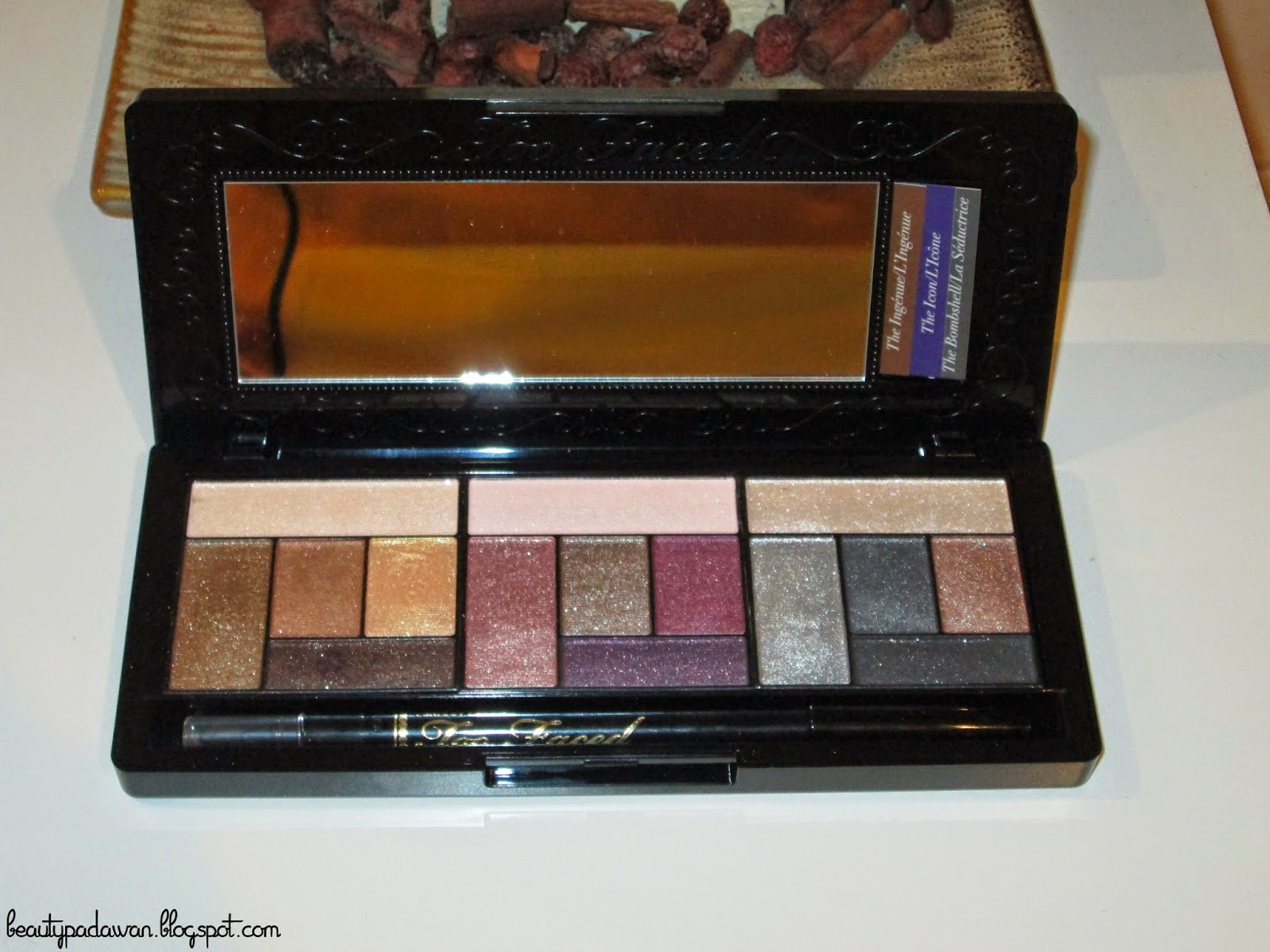 The inside of the palette shows three highlight shades and 12 eye shadows arranged into three kind of "mini-palettes". Notice that none of the shades are matte -- they all have some form of shimmer or glitter in them. A creamy crayon-like pencil eyeliner sits beneath the shadows, with a weird smudgy thing at one end. There are also three concept cards -- one for each mini-palette -- that slot into place behind the mirror, with a day and night look for each one. These cards are of slightly different lengths, so you never have to worry about them getting lost behind the mirror, or having them in the wrong order. 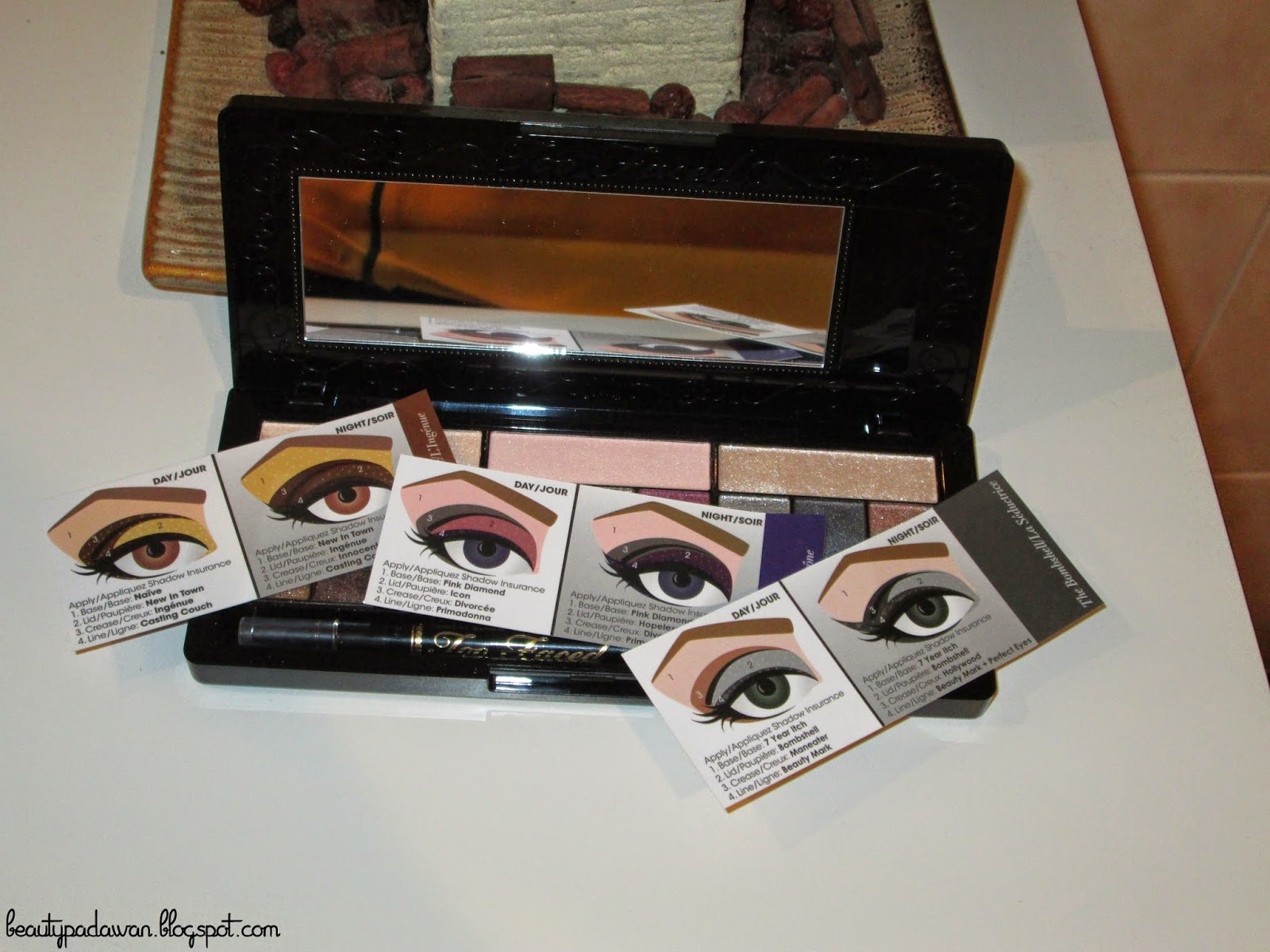 Here you can get a better look at the concept cards, titled "The Ingénue", "The Icon" and "The Bombshell" respectively. These looks range from everyday glam to more sultry, darker ideas. In the swatches, I'll compare them to the shades from the Too Faced Chocolate Bar Palette.
The first block of shadows, corresponding to "The Ingénue" eye looks, are:

This eyeliner came in the palette and has two ends to it. One is, I'm pretty sure, a pencil -- but it's the creamiest pencil I've ever worked with. It glides on smoothly and for the couple of times I've used it, I haven't had to go over it. So far, the wear-time seems to be pretty good as well. The other end is, I think, a smudge tool to create a strong smokey effect with the pencil. Unlike other smudgey things (Padawan term) that I've seen, this isn't rounded but tapered with two flat sides that come together. You'll get a better idea of what I'm talking about in the picture below.

Another one of the reasons why it took me so long to get this review up was that I wanted to try out some of the daytime looks, but I was sick for a little bit and so it took me a while to get the chance! I thought about doing the night looks, but I didn't have any plans to go out and I try to give my skin a break on days when I don't have to leave the house.

This is the daytime look for "The Ingénue" and it is my favourite so far. The primer that I use is by Too Faced, and I feel like I need to add a little bit more in order for "New In Town" to show. I also think it's important to pat on the base colour, rather than sweep it across the lid, because otherwise you'll get a sheer colour that looks kinda bland. I found that the shades on "The Ingénue" shadow set tended to have a bit of glittery fallout, so I would definitely recommend doing your foundations afterwards.

I liked this look too, because purple normally goes well with my eye colour, however I feel like I can get a better purple look from the Chocolate Bar palette. I'd forgotten about the fallout from the previous shadow set until I was halfway through my foundation, but to my surprise this one didn't have that problem. I got a huge kick out of using "Hopeless Romantic" -- it's just soooo pretty! -- so I think I'll tweak the daytime card look until I get something that's a bit more suited to my tastes.

I'm clearly no Marilyn Monroe (nor an Ava Gardner) but this shadow set was the one I was the most excited to try out on the whole -- after all, blacks and greys can make for a really awesome smokey eye. Unfortunately, I was largely disappointed with how this turned out. The day look was more brown than I'd hoped, but the night look just felt like way too much for something that I might wear to work (which is usually where I give new looks a test run!). There was a little bit of fallout, but not as much as with "The Ingénue". I don't think I'll be in a hurry to re-do this one -- I'm more like to follow my own yellow brick road.

Overall, I quite like this palette. I sometimes wish that the colours had a little more pigment, but they're relatively easy to build -- this way, I supposed you can easily go for a dramatic look if that's what you're into. I can think of a variety of different things that I could do with any of the colours, and I think that I'll very soon start mixing colours to see if my Padawan skills have improved at all!

So, do you own this palette? What do you like to do with it?