A couple of months ago, I was contacted by the lovely Adriana from Irresistible Me, who asked me if I would be interested in giving their Sapphire 8-in-1 Hair Curling Wand* for a spin. I had a hair curler already that was pretty wizard, but how on earth could I say no to something with eight different attachments?

This wand was shipped to me straight from the US -- this is not a brand based in Australia. Irresistible Me does offer international shipping, but it is worth noting that you will need an adaptor for your power outlet. They're usually readily available from supermarkets or department stores, and they're not too expensive. It took me a couple of weeks to source mine, but I was looking for a universal adaptor and my local Woolworths was often sold out.

The Sapphire 8-in-1 Curling Wand handle and barrel attachments come all packed within a soft, buttoned-up case that unrolls to show all of the attachments stowed away in its own little individual pocket. When you take them out, you'll notice that they're not all lined up in the same way -- some of them have the barrel tip facing the top, the others have the barrel tip facing the bottom -- but I would suggest keeping them that way. Don't do what I did, and make them all face the same way; the case won't roll up in the same nice and neat way.

The handle has a neat little digital screen that displays the temperature in either Celsius or Fahrenheit -- which you can change by holding down one of the two temperature adjustment buttons on either side of the screen. There's also a small heatproof stand that you can rest the wand on while you're not using it, so you don't need to worry about burning your benchtop.

So, from left to right, these are the barrels that came with the handle!

25mm || A wide barrel that allows for a decent curl.

Pearl | With what appears to be a maximum width of 25mm, this wand has those, y'know, knobbly blobs that took the world by storm last year.

19mm | Slimmer than your average barrel (so I hear), this will create tighter, more defined curls.

13/25mm | Clearly the opposite of the 25/13mm, this wand starts out skinny and finishes up wide, for elegant, open-ended curls.

18/9mm | This wand get seriously skinny, making it perfect for some seriously tight curls.

32mm | A nice, fat barrel, this makes those nice wide curls that everybody seems to love.

There's also a nice heat-proof glove, which is great because I never particularly fancy burning myself. 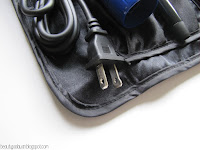 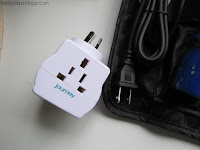 Left: the Sapphire Wand plug; Right: the adaptor I use
﻿
The Sapphire 8-in-1 Wand comes with a myriad of claims that almost make it seem too good to be true. There are the usual, practical ones that make sense to even the newest Beauty Padawans: fast heat up (so you're not waiting until the end of the Galactic Empire), maximum temperatures of 230 Celsius/450 Fahrenheit (so, super hot), a digital temperature display (so you know exactly how hot you've got it), a 360 degree cord (so that shiz doesn't get tangled about -- great for left-handers!), and a lightweight tool (so your arm doesn't feel like it's doing the cardio of a lifetime).

There are then the claims are a bit more uncertain -- not vague, not unbelievable -- uncertain, in that you may not exactly know what they're talking about and whether or you actually should be impressed.

First up: the tourmaline-infused barrel. These are said to be infused with what the company calls "negative ions", so that your hair stays smooth and shiny, and frizz-free longer. Secondly: far infrared technology. Put simply, infrared rays are the natural heat that is produced by organic entities -- people, animals, plants, even the sun -- and it is this type of heat that penetrates the skin and helps us keep warm. When we contextualise that in terms of this curling iron, it means that the heat will deeper penetrate the hair, meaning that it will hold shape longer.

As someone with hair that would take the sun's surface heat to curl and still have it flat within an hour, that sounds pretty impressive.

The Sapphire Curling Wand also holds the claim of having dual voltage. Not gonna lie, I don't know why that's important, but it didn't short-circuit the neighbourhood when I plugged it in, so that's good.

So how did it live up to the test?

Let me tell you, it took me a while of playing around to find what kind of setting would be right for my thick, heavy Hermione Granger hair. I'm looking for specific things when I curl my hair -- it's something that I would usually do for a special event, but I was on placement while I tested this out; thus I needed it to last all day, no matter the public transport or weather conditions I was travelling in. While I do use a heat protectant, I usually can't stand hairspray, so it also had to be a curl that would hold without it. Perhaps that was a steep order for a hair curler. I'd find out.

I also have mermaid hair; it is almost crazy long. I thought the wands looked a little shorter than normal when I first looked at them, so I was worried that I'd have to curl my hair twice (which would've been a deal-breaker for me). However, I measured it against my other hair curler and the barrels are the same lengths. CRISIS AVERTED, PEOPLE!

I didn't want to burn the crap out of my hair, so I began with the default heat setting (which I think was 180 Celsius -- note, with the 32mm barrel). It curled my hair nicely, but the curls didn't last long. It caused me some doubt about how well this would work, but knowing that I could go hotter, I decided to try that before passing my final judgement. I ended up working out that I needed to actually crank it right up to the highest setting (there are a couple of handy buttons for this) and hold it in my hair for about 15 seconds or so to get a curl that held in the windy weather we'd been having.


This actually lasted about two days! Usually curls that last during the day will go flat on me overnight, but these held their shape really well -- and I loved it.

About a week later, I decided to give the pearl barrel a go (known affectionately by me as "the knobbly blob"), as I was able to remember a time when no respectable beauty vlogger on YouTube was without some similar hair tool. I used the same method as with the 32mm wand -- a whole lot of heat protectant, the highest setting, 15-second hold.

In retrospect, I feel like the highest setting may have been a little too high for this particular wand, as it does get quite narrow in places. What I found, however, was that it did add all kinds of texture to my hair! As you can see, it looks a good bit shorter than normal, and I had a great little mix of curls that were large, small, loose, tight -- I really liked it!

I also had in my mind that I'd have to be careful with my hair like this, as I supposed that it would knot like crazy but to my surprise I never really had that problem. It was still insanely curly two or three days later, and when I decided to brush it out, most of them still held a lot of their general shape! I thought that this was absolutely incredible -- remember that I don't use hairspray when I style my hair!

But does it hold up to its claims?

The tourmaline barrel: did it give my hair frizz-free, shiny locks?

Absolutely, it does. I wouldn't have minded if it hadn't, as my hair would've still looked natural, but you can definitely see the difference in shine between the before and after photos. My hair did return to its naturally fluffy state of mind, but it took its time compared to when I've curled my hair previously.

The far infrared technology: does it lock in extra hold?

I would say so. Once I found the right heat setting, the curls usually held most of their structure well into the second day when I used the 32mm barrel, and for several days longer on the pearl barrel. I also used the 13/25mm barrel several times, and the curls held really well for a few days. Even when I brushed my hair (lest it tangled to the point where it became a Pokémon), I didn't immediately go back to my usual Hermione frizz -- I had very, very soft curls, but curls nonetheless.

Remember, though, that I do have to really crank up the heat on this piece of magic. My hair is quite thick, and I'm not constantly styling it, so I can take it. You will need to think about how much your own hair can handle, and adjust the heat accordingly so that you don't fry it to a crisp.

You also can't go swapping out different barrels whenever you feel like you're finished with one and want to work with another -- they need to cool down first.

This brings me to the heat glove. It's certainly dead handy given how hot the iron gets, but I'd still exercise caution when wearing it. I think that it's still possible for you to burn your hand if you really crank the heat up -- so I would still avoid using it to switch out the different barrels.

Overall, I think this would be a fantastic hair tool to get, especially if you're in North America. At $199 USD (~$270 AUD), it certainly isn't the cheapest hair curler at first glance -- but when you split that cost, you're paying $24.88 USD ($33.75 AUD) per wand, which is much cheaper than I've ever seen any single curling iron on its own.

It curls hair really well, and while it's certainly no five-minute job (especially if you want a lot of well-defined curls), it lasts for such a long time that I really don't mind taking the effort to do it! It has genuinely made me excited about the prospect of curling my hair, particularly as I have so much choice in how to do it.

Do you like to curl your hair? Which of these would your favourite attachment be?

Bloglovin' | Facebook | Instagram | Pinterest | Twitter
This product was sent to me free of charge for my honest consideration. It's been reviewed in accordance with my Disclaimer Policy, because life is short and I have better things to do with my time than waste yours.
﻿
Posted by Shae Barry at 23:01