Australis released the limited edition AC/ME several months ago, so while you can't find them in stores anymore, you can still buy them online. If, like me, you're not into buying things online (lest your bank account shrivels up) and you've missed out, never fear -- Australis also have a line of cream shadows called Metallix, which more or less follows the same idea as AC/ME (and looks to be permanent). The AC/ME cream shadows claim to have a metallic foil finish, have a high colour pay off, and intense coverage; they also claim to soften and moisturise the eyelid. Inspired by some of music's finest, the names enough would be enough to draw anybody in, let alone the claims -- and today I've got two of these AC/ME cream shadows to show to you!

The two shades that I have are "Bronzonce" (pronounced, in my humble opinion, bron-zon-say -- as in, rhymes with Beyoncé) and "Plum Diddy". "Bronzonce" appears to be sold out online, but the shade "Gold Gaga" from the Metallix range looks to be a fairly close dupe, if not an exact one. "Plum Diddy" was also re-released with the Metallix (as was the third shade in the collection, "Jay Zed"), so you don't need to worry about missing out!

The packaging on these cream shadows is relatively standard, as far as I can tell. It's a little black plastic pots with a black screw-on lid, and the name of the brand and collection is emblazoned on the top in a glorious metallic pink. On the reverse side of the packaging is the shade name and other miscellaneous details, so you always know which glorious musician you're embodying.

Upon original opening, these shadows felt slightly firm and dry to the touch, which made me worry about application and payoff. After all, how else are you meant to channel your inner Queen Bey if the product named in her honour won't come out of the tub? The product, however, warms easily with the finger, leaving it feeling really thick and creamy -- and this brings me to my preferred method of application.

If you're in possession of a cream shadow brush or a concealer brush (I say concealer because those brushes are built to work with creamy products), by all means, use them -- and if cream shadow brushes essentially have the same head as a concealer brush, all the better! I wouldn't really bother working with standard shadow brushes myself -- while they do apply colour, it can be quite sheer and will take time to build up; I find that I generally get the best pigmentation and easiest application from using my fingers. 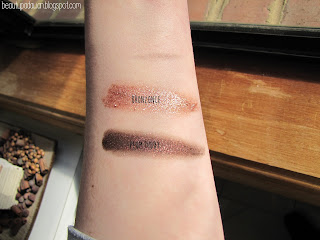 "Bronzonce" (rhymes with Beyoncé) is a metallic, glittery, shiny bronze-y gold. Over the top of a primer, it can go on and on all day with very little fading or creasing on my excessively oily lids. Without a primer, I find that it can still go a fair distance -- about four to six hours, depending on hot it is outside or how oily my lids decide they want to be.

"Plum Diddy" is a blackened purple-ish plum with red glitter and a shiny metallic finish. I find that this is such a nice, dark colour that I want to be careful with application, especially when using my fingers, just to avoid it looking too messy. I like to generally spot-apply it to whichever area I want to use it in, and then use a fluffy blending brush to sheer it out and blend it with any other products I'm using.

I more often than not tend to use these shadows together. A favourite look of mine is to use "Bronzonce" all over the inner two thirds of my lid, then put "Plum Diddy" onto my outer third. I use a blending brush, as mentioned just earlier, to bring the latter shade into my crease and neaten the overlap between the cream shadows... And voila! As far as using a liner goes, I will only ever use my Maybelline Hyper Glossy liner -- these shadows have a kind of almost-tacky creaminess to them that my pen liners don't like all that much.

Do they have that metallic foil finish? I would say so, though I don't have anything else to compare it with. Do they have intense coverage and a high colour pay off? Yep, they sure do, though you will want to use your finger for best results. Are they softening and moisturising to the eyelids? I wouldn't necessarily say that they are, but they are quite comfortable to wear -- they never dry out on my lids. Overall, I think that these shadows are worth getting if you're interested -- and at $7.95 each, they're not a bad price, either!

What is your impression of these shadows?