Warning: This post contains copious selfies, bacon and the best eyeliner of all time.

August was a busy month in Instagram! I felt as though I was snapping everything I came across, and as I played with and created new looks, I snapped a lot of myself as well! It was a month where I perfected the art of crispy bacon, ate more cheese than is socially acceptable and discover the greatest drugstore eyeliner. Have a look! 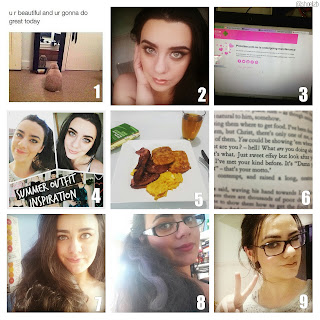 This picture is something that I think I need to have sticky-taped to my wall! Who doesn't love a bit of inspiration, right?

I was really pleased by how this look turned out that I couldn't help but post a little sneak peek before it went live.

I decided to go window shopping on Priceline's website and it. was. down. It was down! Turns out they were revamping it with a new layout.

4. Not one, but TWO posts have gone live today! I've collaborated with @msjesslouise on YouTube to bring you some summery inspiration! Jess has created a video on some gorgeous summer outfits, and I have created two makeup looks that are versatile enough to go with ALL of them! Our links are in our profiles! #msjesslouise #thebeautypadawan #bbloggers #bbloggersau #itwassofuckingcoldwhenitookthosephotos

Now this was a big excitement on my blog! I'd spent weeks working hard on a collaboration with my old friend Jess from high school. She filmed a video on summer-inspired outfits, and I wrote two tutorial-ish posts to go with them: one for a daytime look, and one for the evening. It was so satisfying to see it go live!

5. When life pisses you off, make bacon and eggs and read about the ending of days. #breakfasttime

I love bacon when it's crispy like that. Love. It.

I have read this book at least half a dozen times and that was the first time I ever realised what it meant. Did I just not take notice of it before, or was I so innocent that I couldn't work it out? Probably the latter. We'll never know.

AHHH, it was so soft and fluffy!

It turns out that using hair chalk in your hair is much, much messier than it ever indicates on the can.

9. Dear brother: when you leave your nerdy glasses behind, I steal them and put them on. Happy Thursday!

I'd probably actually wear them but they're just that bit too strong for my eyes -- and as far as I'm aware, they're a very weak prescription. That's right, my glasses prescription is weaker than a glass of cordial that was made with one part syrup, twenty parts water. Doesn't matter! They're for long-distance reading anyway, I just wear them everyday because I love them so much. 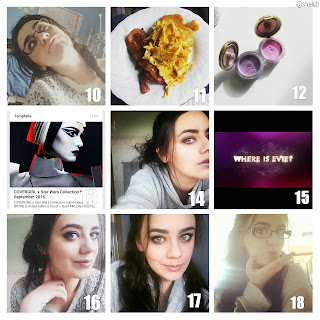 10. If someone would like to bring this hungry little Vegemite some snacks, that'd be great. :D

I was hungry-bordering-on-hangry, and I couldn't think of anything to eat, until...

11. Who said bacon and eggs were exclusively a breakfast thing?

That's right! I made myself more bacon and eggs! Food for the Gods!

I never actually thought that I'd ever buy any more Loose Eye Dusts, because I've never really used the two I already had, but these were 40% off and sooo pretty!

13. Seeing this on Bloglovin' made me shout with surprise, literally! There's no telling if @covergirlau will bring this to Australia, but I feel it's unlikely, sooo I think that @daniellecaliforniaa should maybe send me some. :D :D

IT IS. IT IS COMING TO AUSTRALIA.

14. By the pricking of my thumbs, something wicked this way comes. #wip #thebeautypadawan #fotd #bbloggers #bbloggersau

I'm pretty stoked with how this look came out, but it's something I'm still playing around with!

The whole "Where is Evie?" promo ended up being for the premiere of Sofia Carson's remix of the song "Rotten to the Core". I know several people were disappointed because they were hoping for a short of some kind, but I actually really enjoyed it.

My eye shadow looks purple, but it's actually blue!

Feeling all the Macbeth feelings.

This actually isn't on my Instagram. Seriously, go look, it's not there! I think I took this photo and then Instagram crashed... And I ended up using it in this post! 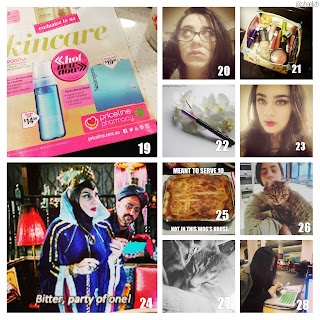 I still haven't purchased these items, but I really, really want to.

It's like leaving a cheesecake out on the table when I'm home alone and hungry, of course I'm not going to resist!

21. Looking at my mother's everyday pretties. Sharing is caring, right?

22. The new @maybellineau Hyper Sharp Wing liner is THE thing if you're looking for easy, sharp, fuss-free wings! Check out my review - link in bio. #bbloggers #bbloggersau

Seriously, this liner has been my go to ever since I bought it. My wings take me two minutes -- literally.

23. Today's #FOTD was brought to you by Napoleon Perdis, CoverGirl, Too Faced, Rimmel, Maybelline and a carefully selected filter. :'D

I was playing around with several of the editing features on Instagram with this photo. I'd just discovered them by accident, and it was kinda fun!

I have been seriously obsessed with the Descendants film. As a lover of Disney, they had me at "Evil Queen".

Who turned their dinner into a meme? Ohhh yeahhh.

26. 10 months old and he'd been one big puddy tat. #ClaflinsAdventuresNoMore

This marked the one-year anniversary of my cat's passing.

27. The uncertainty you felt about taking sole responsibility of a creature, when most days you were hardly sure you could take care of yourself. How you were up late at night trying to find out if there was any medicine you could give it, because it was so young that 98% of it was unsuitable. How it just assumed that it's rightful place was next to you when you slept, and how it would always end up sleeping on your chest if you tried to disagree. How it always rubbed it's head against your chin when you were sad. How it sometimes napped while cuddling your hand. It's not something that you can just "get over" after a year, it's something that makes you acutely aware when it's that time of year again.

More about that here.

Jess is one of my greatest friends, and we've been under a lot of stress lately as far as our studies are concerned. (Hence my latest short absence!) If there's one thing that being friends with her has taught, it's that it always pays to have a great study buddy to help you pull your head in. Even if I did spend a good chunk of the day listening to an audiobook.

And that wraps up what I got up to throughout August! Don't forget that you can always follow me on Instagram here -- come on over and say hi, I do enjoy chatting to people!

What did you get up to in August?