I've really been getting into coloured liners lately, especially along my lower lashline -- it's easy to do when you're short on time, and it gets fun when you've got a bright colour that lasts all day! With this in mind, I picked up three eyeliners from Eye of Horus when I went to Beautiful You in September. I hadn't heard of the brand before, but something about the name drew me in -- perhaps just the name itself?

Eye of Horus is an Australian-owned company that focuses on cruelty-free eye makeup: mascara, a liquid liner and a myriad of pencil liners. They've also got synthetic brushes, sharpeners and sunglasses. They may not have any shadows, but that's where the pencil liners come in -- colours so bold and long-lasting that you can use them as a shadow as well, which becomes waterproof and smudge-proof after thirty seconds.

How could I resist? 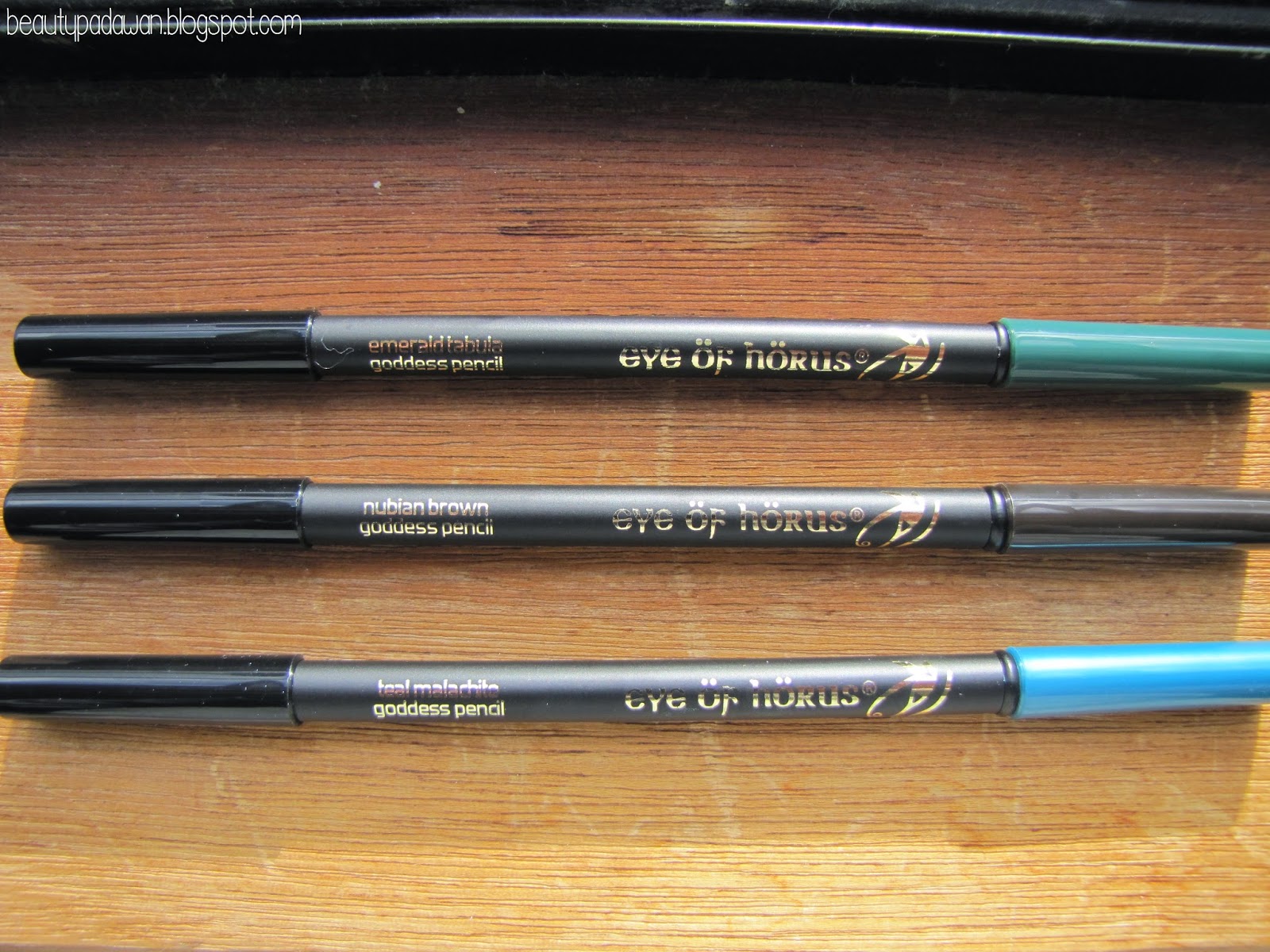 These pencils normally retail for $30 each, which is on the pricier end of a liner -- it's more expensive than some of those put out there by Too Faced, Stila and Smashbox, but cheaper than NARS, Bobbi Brown, Chantecaille and By Terry. There was a special at the Beautiful You expo that allowed me to purchase three liners for $50 -- bargain!

I did think about getting the Charcoal Obsidian (aka black) pencil, but then I thought about how 90% of my eye liners are black and how I really didn't need another black eye liner.

I opted for Nubian Brown (a really cool, matte light brown), Teal Malachite (a vivid metallic blue), and Emerald Tabula (a dark matte green). All of the eyeliners run really nicely along the skin (does that even make sense?) and it reminds me somewhat of the Too Faced bulletproof eyeliner. Thing that I prefer about these, however, is that they won't be used up too quickly. I've noticed that the Too Faced eyeliner is so creamy and soft that it will blunt and be used up in next to no time at all -- this doesn't happen as much with the Eye of Horus liners, but you still get amazing pigmentation. 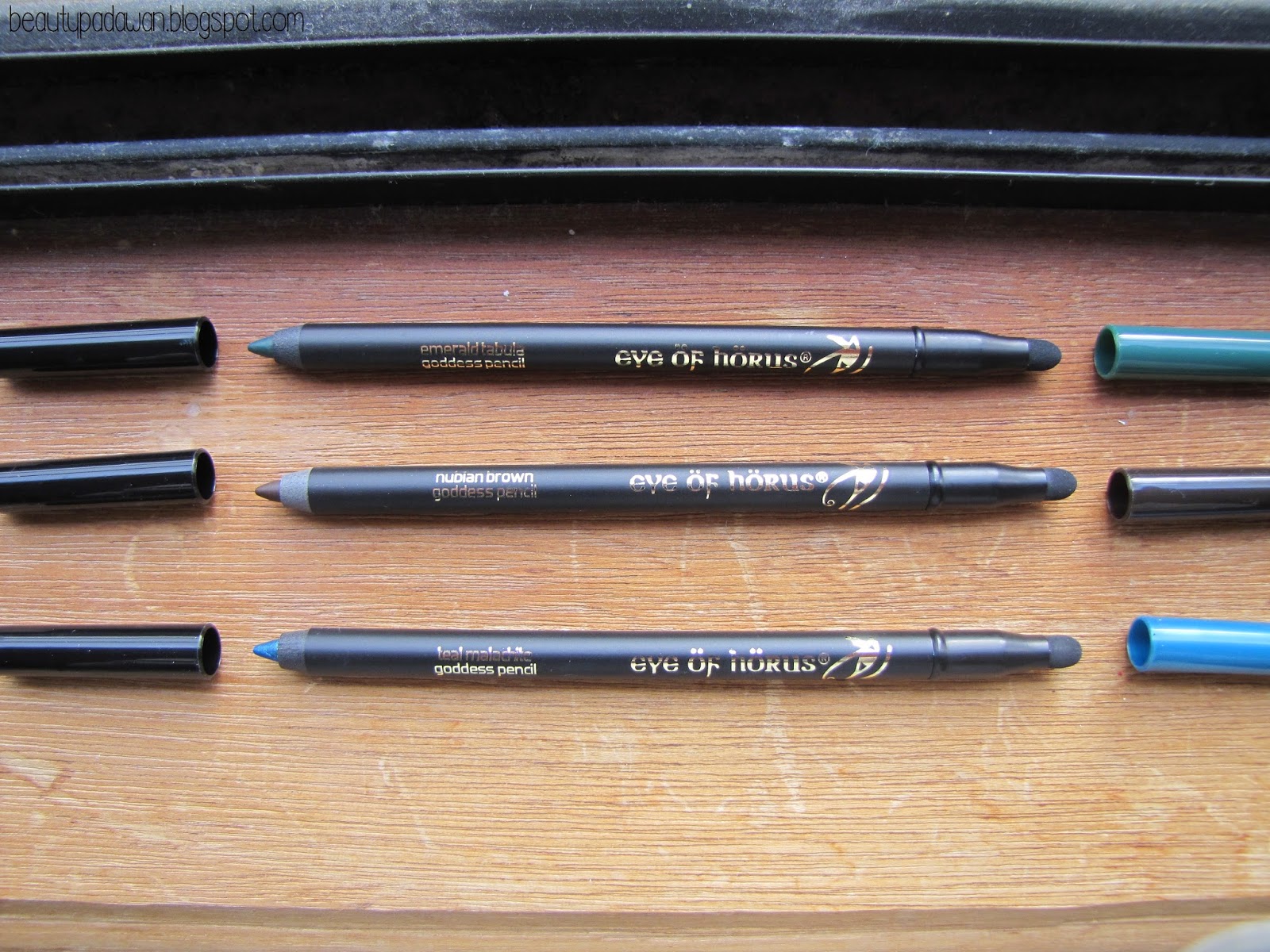 The product is dual-ended, with the pencil-shaped crayon liner on one end and a smudging tool on the other. I find that the tool works rather well, although it does sheer out the colour just a touch -- but honestly, I'd expect that. You may have to work relatively quickly, as the product is supposed to set within thirty seconds, but it is doable if you're confident -- even for Beauty Padawans.

Is the product waterproof? To a degree. We've had some wicked rainfall in the last week and, thankfully, it's stayed in place! (The only thing worse than running mascara is running teal eyeliner -- no thanks, I'll skip on that). That being said, it's not stubborn to remove, and I find that plain old reliable Micellar Water gets it off just fine.

It is smudgeproof? I'm going to go with yes, for the most part. Let's get real here: if you rub your eye like you're kneading dough, it's not going to stay on like permanent tattoo ink, but the smudging is very minor. Considering I have eyelids greasier than a BP oil slick, anything that doesn't budge gets the thumbs up from me! 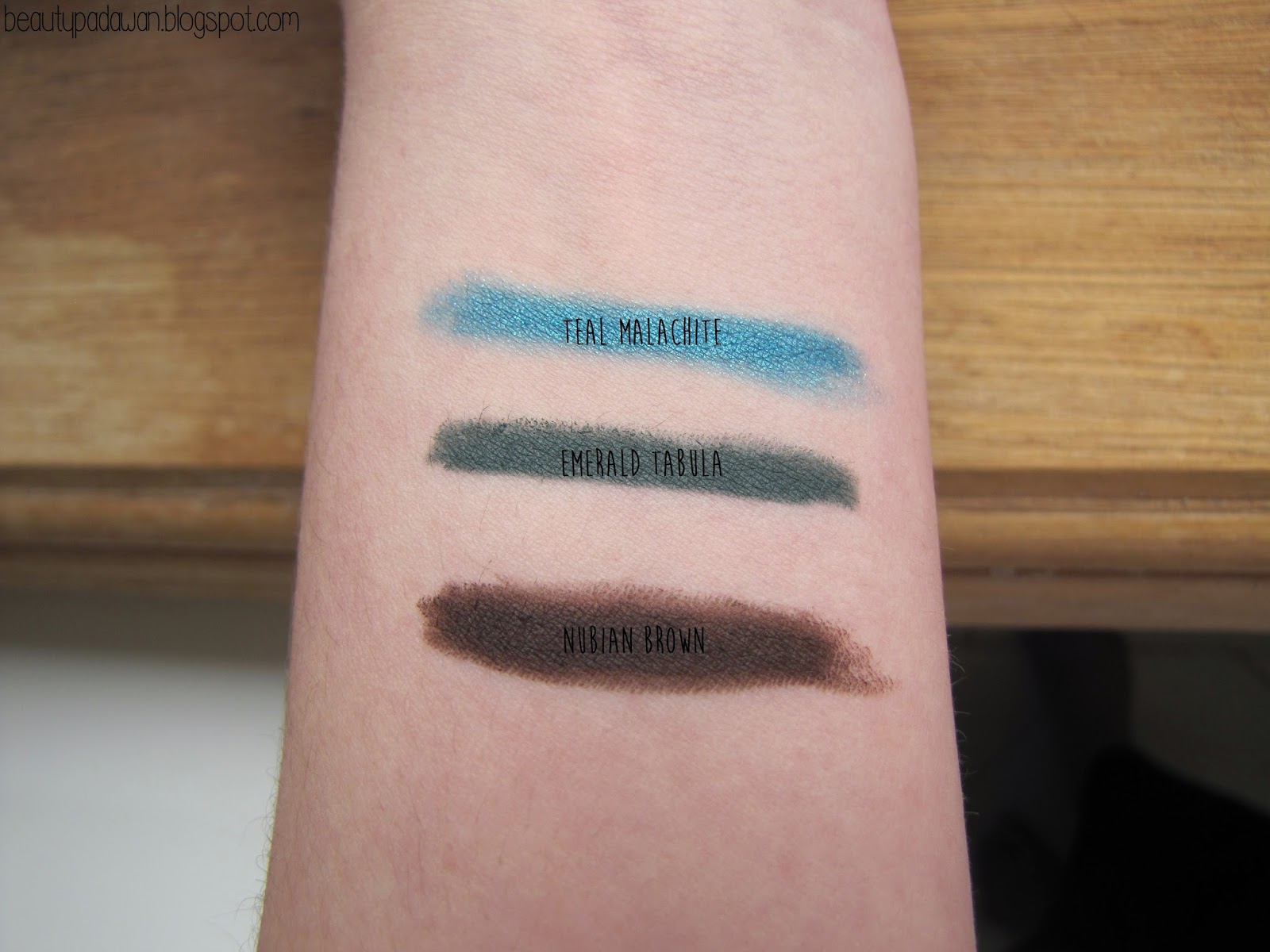 Can you use this as an all-over lid colour? Absolutely, but you might get through the pencil relatively quickly if you keep doing so. The life of the product will be extended if you use the smudging tool, obviously, as you'll use less, but if you want that little extra kick of vibrancy, you may not want to. I won't rule out using it as a shadow in the future, but I'll mostly stick to using it as a liner.

How well does it last? Oh Nellie, it keeps on going like a brand new car with a full tank of petrol. While the liner does mute just the slightest in colour over time, it is by no means faded -- I like to wear these along my lower lashline and they can keep going for over twelve hours without a problem.

In my opinion, these liners from Eye of Horus are a collection with which you cannot go wrong. If you want really beautiful colours and a decent wear time, this is a line worth trying. Of course, $30 may be a little bit more than you might be willing to pay, but Eye of Horus currently has a Christmas Goddess Gift Box available that contains a mascara, gold metallic tattoos, your choice of two eyeliners, a sharpener and a golden ankh necklace for $79! It's great value, especially when you consider that the two eye pencils plus the mascara would cost you $95.

Have you tried any of the liners from Eye of Horus?