The challenge set by Amy of Style Storms for Day 10 of the 12 Day Blogger Challenge has been a difficult one -- "a day in the life". I wasn't completely sure what that meant, so when I went out yesterday I decided to take a couple of photos as I went along. Of course, lugging a camera around when all you really need to do is pay a few library fines (oops!) is cumbersome, but luckily I had my phone sent in for repairs earlier this week and now my beloved camera works again! 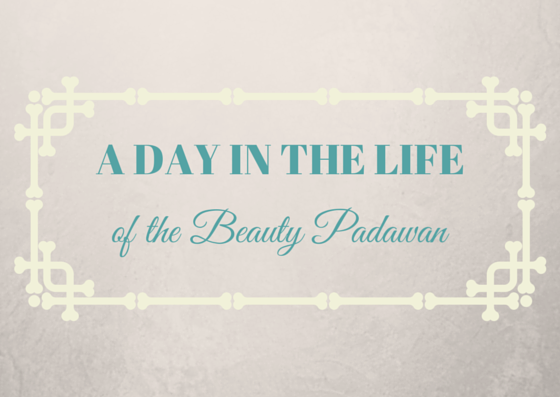 Be prepared for some dodgy camera quality fun.

So my day kind of technically started at 2am, by ending the day before! It had been a warm night, just warm enough to make sleep uncomfortable -- so I decided to watch some TV in bed instead. I caught up on some Bones -- does anyone else like how it's been throwing back to the early seasons? -- and by the time I'd finished a few episodes, I had somehow cooled enough to sleep.

By this stage, I had woken and dressed (o sleep! How thou dost avoid me!), and was on my way to the train station. With my mother having to attend a conference in the city, I was going to uni the long way 'round -- but oddly the train didn't get too packed. It's very unusual for that to happen in the morning rush hour, so I'm not sure if our carriage was lucky or if everyone was having a lie-in.

What was I wearing? My trusty jeans, a short grey dress with a wide belt, and a long grey cardigan -- because I didn't care if the weather was supposed to be 28, I wasn't risking being exposed to a sudden cold front. It's also worth noting that on my lips I'd applied Rimmel Provocalips in "Play With Fire". You'll later see why.

By this stage I was buying some chicken fingers for breakfast (what is clean eating?) at the Woolies in the train station -- and do you know how fancy this shiz is? They have sushi and juice and a café plus all of these super awesome lunch deals that I passed over in favour of the Food of Gods (chicken fingers, yo!) -- it is SO swish. Of course, even your most basic stuff is sometimes more expensive than a regular Safeway because of location, but when you need food, you need food!

From there I trammed it all the way to uni. It's a long journey, but I had a book and a couple of TV shows on my tablet to keep me company.

Fines paid for -- all $10 of it -- I thought it might be a good idea to wander around the library for the last time. If I weren't supposed to graduate this year, I probably would've borrowed half a dozen books or so to read over the holidays! My university has an excellent history selection, and I had to visit my favourite section one final time, 100% for old times sake and not because I was wondering if I might be able to just buy the books from the library.

"So which period of history is worth bankrupting yourself for?" I hear you ask.

Ta-dah! Tudor history! With Lady Jane in particular being my spirit animal, I've often come to these shelves to be at one with the universe whenever I've needed new reading material. Maybe it's a book-lover's thing. 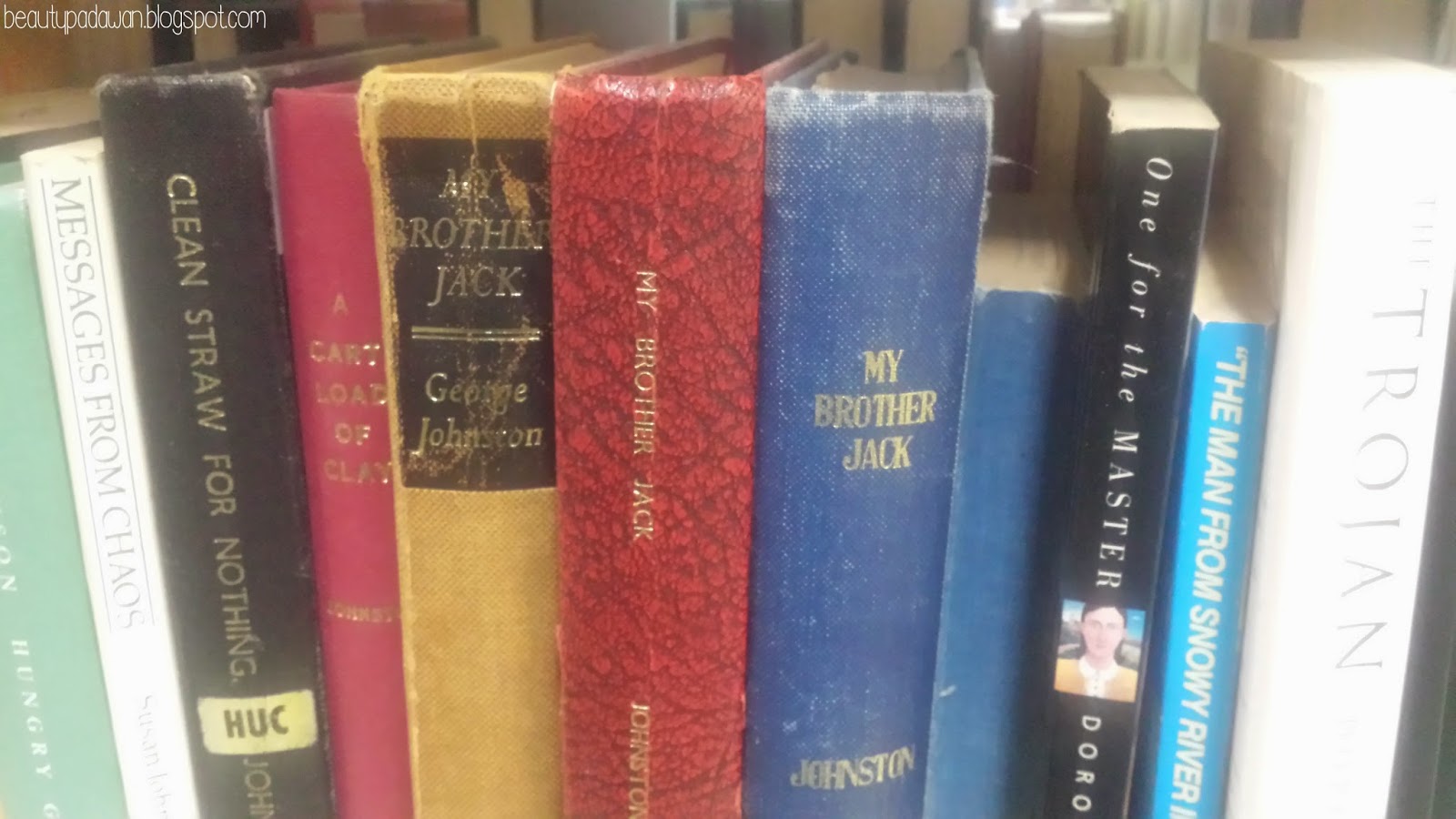 Except where this lot are concerned. Whilst roaming around, hoping for a glimpse of The Mysteries of Udolpho, I stumbled across my old nemesis, My Brother Jack. I was supposed to study this book in high school and I hated it -- so much so that when I found out, two chapters in, that we weren't actually going to be assessed on it at the end of the year, I threw out my copy and point blank refused to do any more work related to it.

Oh, y'know, just some wild cockatoos.﻿
Time to leave... forever! (Cue the sad violins.) I walked past the cockatoos without really seeing them, just thinking in my own ridiculous way that they were somehow just part of the grass. That was, until one of them moved and scared the bejeezus out of me. Seriously. The shriek that came from me was probably half-human at best.
I'd also made up my mind on an important point. Remember the Provocalips I mentioned earlier? I wanted it off. I didn't feel like wearing it anymore. -- But of course, trying to take the stuff off is almost impossible, so after a disastrous session in the loo with some wet paper towels, I simply reapplied it and made up my mind to buy some makeup wipes from Woolies.
And so I did. And I headed to the restroom.
It took me a good five minutes to rub that stuff off -- and the wipes I use can take off waterproof mascara with relative ease. Luckily I had a lip treatment in my handbag that I could apply. Never leave home without a lip treatment!

﻿I left the restroom and immediately spotted... nirvana! Sugar Station is a chain with stores dotted all over the city -- it's one of those ones where you can get mostly international sweets, as well as pay-by-weight scoop stations (you know what I mean, right?). This one is probably the second-smallest I've walked into, but it was full of so much amazing stuff. Just for instance: I saw a jar of Reese's actual Peanut Butter.
Who knew that was even a thing?!
I was almost tempted to buy some, buuut I bought a Wonka Nerdalicious instead.
It was delicious.

I decided it would be an awesome idea to meet my mum and stepdad for lunch, but the first of the two wasn't breaking until 1 and it was kinda too warm for hanging around -- so that naturally meant that I should go for a milkshake at the churro place.

This place is amazing. It's not cheap, especially if you decide that you want multiple items from the menu, but it is the perfect place for a treat if you're going with friends -- or just yourself, for that matter.
Walking on a slightly too warm day when you're a person who's not overly keen on weather that's too warm makes you... very warm. Warm enough to not only order the Cookie Cha Cha milkshake you had every intention of buying, but also a San Churro Sundae.
It's definitely a bit much if you weren't all that hungry to begin with.
It was so good, though.

My mother's meeting was running late, and I had kind of fatigued myself by eating so much (lazy life!), so I thought I'd better head home. My brother Daniel came and picked me up from the train station, and from there the rest of my day was relatively mundane.
I watched several episodes of a new TV show I've been meaning to try -- and it's alright. It's not a bad show, by any means, but I haven't taken a particular shine like I have with most others.
I took my makeup off and applied it fresh for work. I went to work. It dragged a little. I went home. I knitted a little bit, worked on some blog posts... the typical Thursday night stuff

And that brings me to the end of the night! Dressed in, quite honestly, the best PJ-related investment anyone in the world could make, it was time for me to do a final bit of late-night reading before getting some shut eye!
That's it for my "day in the life" post -- it's without a doubt probably the strangest, most difficult post I've ever had to write. I can't lie, I'm kind of glad it's over -- there really isn't very much to my life! So, instead, tell m a bit about yours: how was your day today?
Sarah xo
Posted by Shae Barry at 19:43