About a month ago, I picked up a few of Rimmel's Lasting Finish Lipsticks as part of a drugstore haul. There weren't many testers available -- a pet peeve of mine -- so I was rather hoping more than expecting the shades I bought to look good. As it turns out, I was surprised several times! 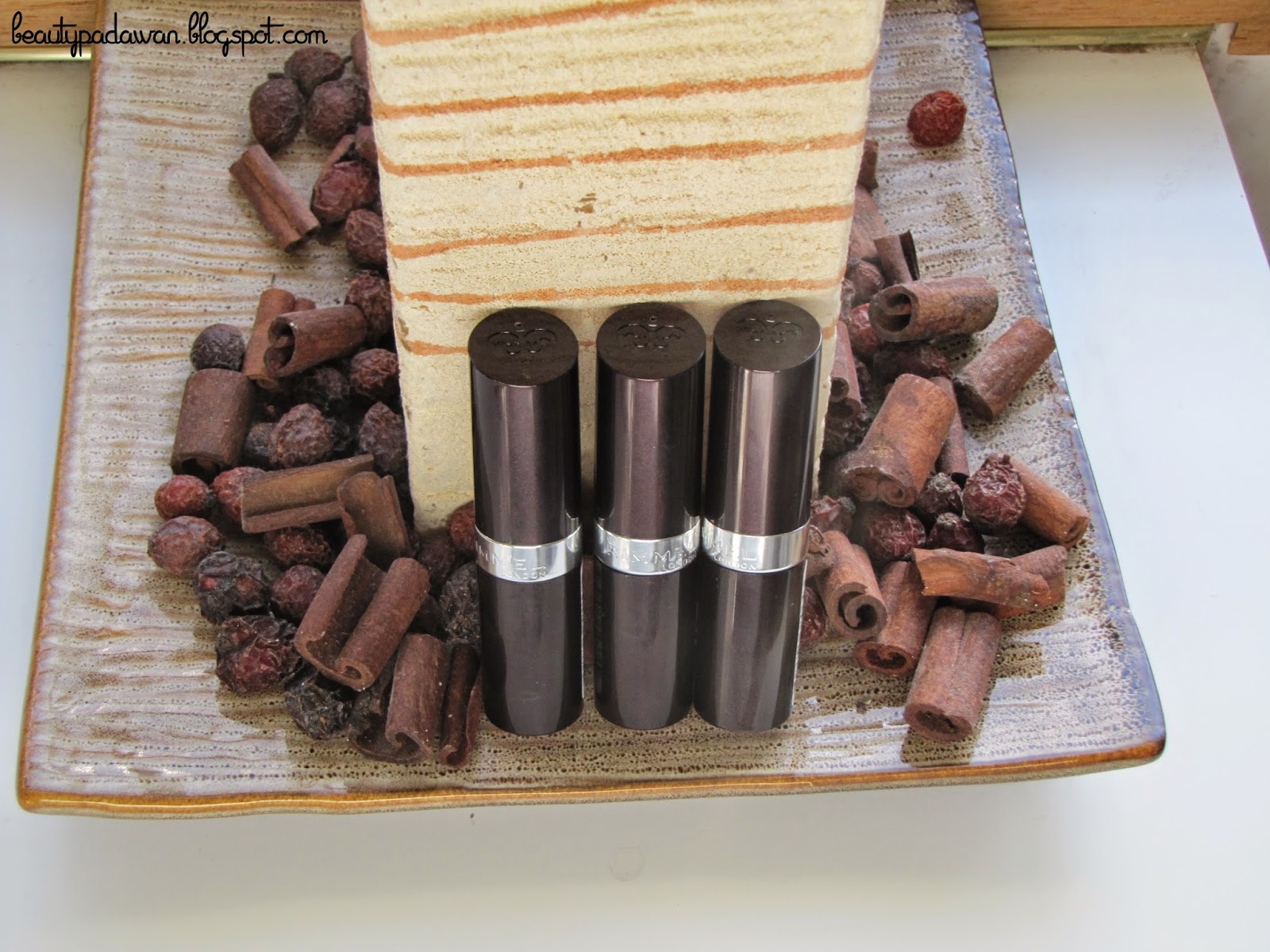 The Lasting Finish range seems to the staple line of Rimmel lipsticks. They've got a few spin-off lines, so to speak, but this one advertises 19 shades that boast long-wearing colour with a creamy texture. I've really come to enjoy lipsticks over the last few months, even though that's meant increased scepticism about wear and colour pay-off -- but Rimmel is one of my favourite brands, so I was excited nonetheless. I picked up three shades: Amethyst Shimmer, Sugar Plum, and Starry-Eyed.

﻿
Even though Amethyst Shimmer and Sugar Plum are right next to each other on the number line, the little sticker on the bottom of the tube appeared to show two relatively different colours. So, when I opened up the tubes, my Padawan mind was very disappointed to see that the shades seemed hardly distinguishable! Even Starry-Eyed seemed browner in the tube, without that hint of purple I thought I'd detected in the sticker. Of course, I've never been one for picking colours, so I'd be very happy to credit my initial disappointment to my general lack of beauty skill.

﻿
Amethyst Shimmer is what my eyes are telling me to call a cool-toned kind of berry plum-ish colour -- it wears as a kind of pinky-purple. I want to say that it has a little bit of shimmer in it, with a light scent that is not detectable when applied. It's neither hydrating nor drying on the lips and I didn't notice any bleeding or feathering. It fades after a few hours to a slightly more natural plum colour, and I didn't notice any disastrous ring of colour -- however, this was without eating and drinking.

Upon opening the tube, I was dismayed to find what appeared to be tell-tale cracks in the lipstick itself. I feared that this meant it would be very drying on my lips or that it wouldn't apply well.

This, however, was not the case. Whether these are just lines in the product and not actual cracks, I couldn't tell you for sure, but this lipstick did apply smoothly and didn't dry out as cheap or matte lipsticks sometimes do. Amethyst Shimmer does not appear to be available in the US, but it is in the UK and Canada.
﻿
Sugar Plum looks to me to be almost the same as Amethyst Shimmer, only slightly pinker. It too has shimmer in it, and the scent, though the same, is lighter than in Amethyst Shimmer -- it's very faint. I did not find it to be neither hydrating nor dehydrating, but it was very comfortable to wear. After a few hours it faded to more of a natural pink, without a ring of colour around the edges of my lips; even with eating it didn't appear to look as though it had completely wiped off my lips, but I was very careful about blending any potential harshness around the edges if I didn't plan on reapplying.

﻿
This lipstick also appeared to have relatively alarming cracks in the product, but like Amethyst Shimmer it wasn't dry and it didn't tug on my lips. Sugar Plum is available in the US, UK and Canada.
﻿﻿
Starry-Eyed was initially something of a disappointment when I saw the colour -- what on earth made me think it would be purple? -- but it's actually my favourite of the three. It's a kind of reddish-brown brick colour that doesn't have any shimmer and almost no detectable scent. It looks rather dark when first applied -- I don't think the photo below will do it justice -- but I think it looks quite wearable, and I've been told that it looks quite nice.

There were no cracks whatsoever in the product, it didn't tug or pull on my lips and -- knock on wood -- I haven't noticed any feathering or bleeding. After a few hours it faded from that brick colour to a really pleasant deep red plum, which was quite surprising for me! It was neither hydrating nor dehydrating but it did keep its nice slightly creamy feel while I was wearing it.

You can also get Starry-Eyed in the UK, but it does not seem to be available in the US or Canada. The closest I seem to be able to find in the line is Dizzy, which is not available in Australia, but seems to me to be lighter, more red-toned.

﻿
Overall, I've really enjoyed this lipstick range. I'm quite impressed by how the colour fades very evenly over time. The selection of colours, which does vary slightly from country to country, is nice but I think sometimes a little too close to others. Those who live in countries that don't sell Amethyst Shimmer will find a very easy dupe in Sugar Plum.

Have you tried any lipsticks from this range?