Drugstore Haul #7: Off the Bandwagon Edition

It is so, so easy to say, "That is IT! I've had enough! No more spending money!" It's quite another resist a 40% off sale at Priceline when "window-shopping" with your makeup partner in crime. Truth be told, I'd wanted nothing for myself -- I'd mostly wanted to pick up a few extra things before my giveaway began (which you can still enter, by the way!).

Of course, life doesn't always go to plan. You misplace your car keys when you're already late, you burn a special dinner... you enter Priceline for a quick look and spend a week's salary.

But that's the curse of being a blogger, right?

With their massive 40% off sale, I simply couldn't resist throwing item after item into the basket that my trusty friend Jo-Anna held for me, even with unhelpful comments such as, "Do you need another one?" "Oh my God, that's a lot of lip products." and, my personal favourite, "Step away from the mascara."

I could say that Jo-Anna, like Jon Snow, knows nothing, but she's as bad as me. Let's look at what I got! 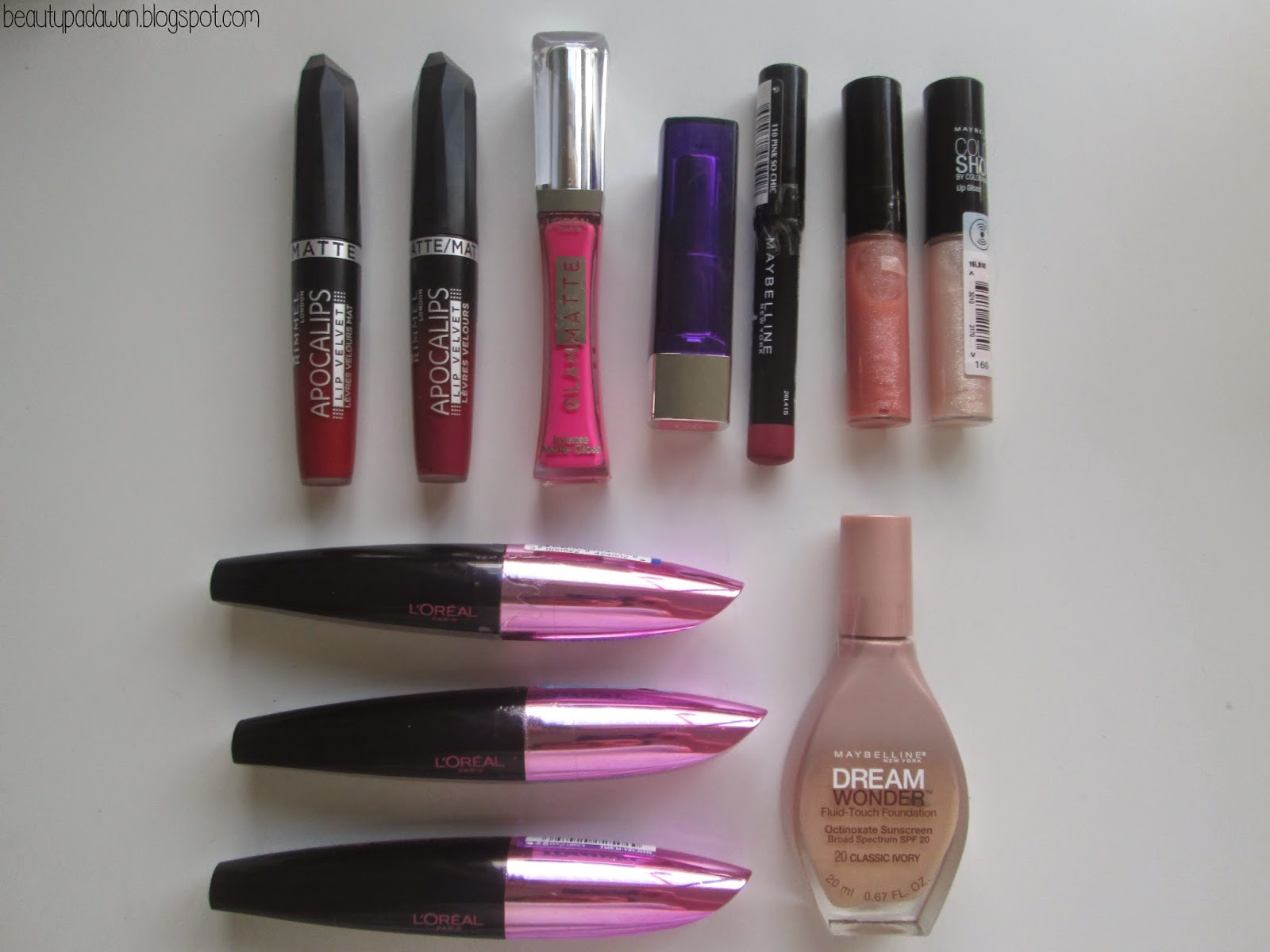 Rimmel London Apocalips Matte Lip Velvet in "Burning Lava" and "Meteoric Matte" || I was slightly concerned when I bought these -- I thought it might be possible that Rimmel had created a monster that combined the dryness of a liquid lipstick with the feathering of the original Apocalips lip lacquers. I'm glad to say that I was wrong! So far both shades have been very comfortable to wear, and while they look matte after a little while, they still feel creamy on the lips.

L'Oreal Paris Glam Matte Intense Matte Gloss in "Fuchsia Flare" || I bought this thinking that it might be a dupe for MAC Viva Glam Miley Cyrus, but it definitely is not that. It's much brighter than Miley Cyrus and is slightly drying over time.

Rimmel London Moisture Renew Lipstick in "Ringa Ringa Roses" || I think that Rimmel might be discontinuing this shade, as it had a reduced to clear sticker on it -- I still got the additional 40% off though, which was awesome. It's a really pretty, natural pink and I've gotten several compliments when I've worn it.

Maybelline Color Drama Intense Velvet Lip Pencil in "Pink So Chic" || This isn't exactly what I'd have called a pink. It kind of leans towards a plum-ish mauve tone, but other than that, I love this! It's basically a short, fat lip pencil, but it's quite creamy in comparison to a normal lip pencil.

Maybelline Color Show Lip Gloss in "Barely There Pink" and "White Glitz" || I bought these as potential dupes for the MAC Cinderella lip glasses, although I obviously haven't tried them out yet to see how they compare. I think Barely There Pink will look great on its own, although White Glitz may look best if it's layered on top of something else. We'll see!

L'Oreal Paris Miss Manga Mega Volume Mascara in "Indigo", "Turquoise" and "Purple" || Can you believe that Priceline didn't have this mascara in black? I hadn't even realised that this came in colours -- I'd picked up the Turquoise tube thinking that the light blue meant it was waterproof, but I quickly realise what was going on and raided the counter for other shades! Of the three, I've only worn Purple properly so far, and it doesn't show up all that much but that's likely because my eyelashes are so dark. Turquoise really seems to a pack a punch of colour, and I haven't yet opened Indigo.

Maybelline Dream Wonder Fluid-Touch Foundation in "Classic Ivory" || I was excited to try this at half price because I'd kept hearing great things about it, but I have a couple of bones to pick with this line. The first is the size: only 20ml in comparison to the standard 30ml -- considering that this is Maybelline's most expensive foundation, I was surprised. The second is the lack of shade range. Classic Ivory is too light for my skin -- I can usually wear it fine, don't get me wrong, but on warmer days it's just way too pale, and the next shade up was way too dark.

And that's the end of my haul! Have you purchased any of these items recently? Which of these is your favourite? Let me know!