I can hardly believe it -- how can February have disappeared so quickly? And, arguably more of a shocker, I'm actually posting a Favourites post for the second time in as many months! When I started Diary of a Beauty Padawan, I found that I didn't need to write them so often, that one every two months did the trick.

My February favourites are almost enough to do a whole face. You're likely able to see the kind of look I've been going for lately: a full face, natural eyes, nude lip and a kickass blush. This is what I've been using to achieve all of that (and getting some nice compliments along the way!). 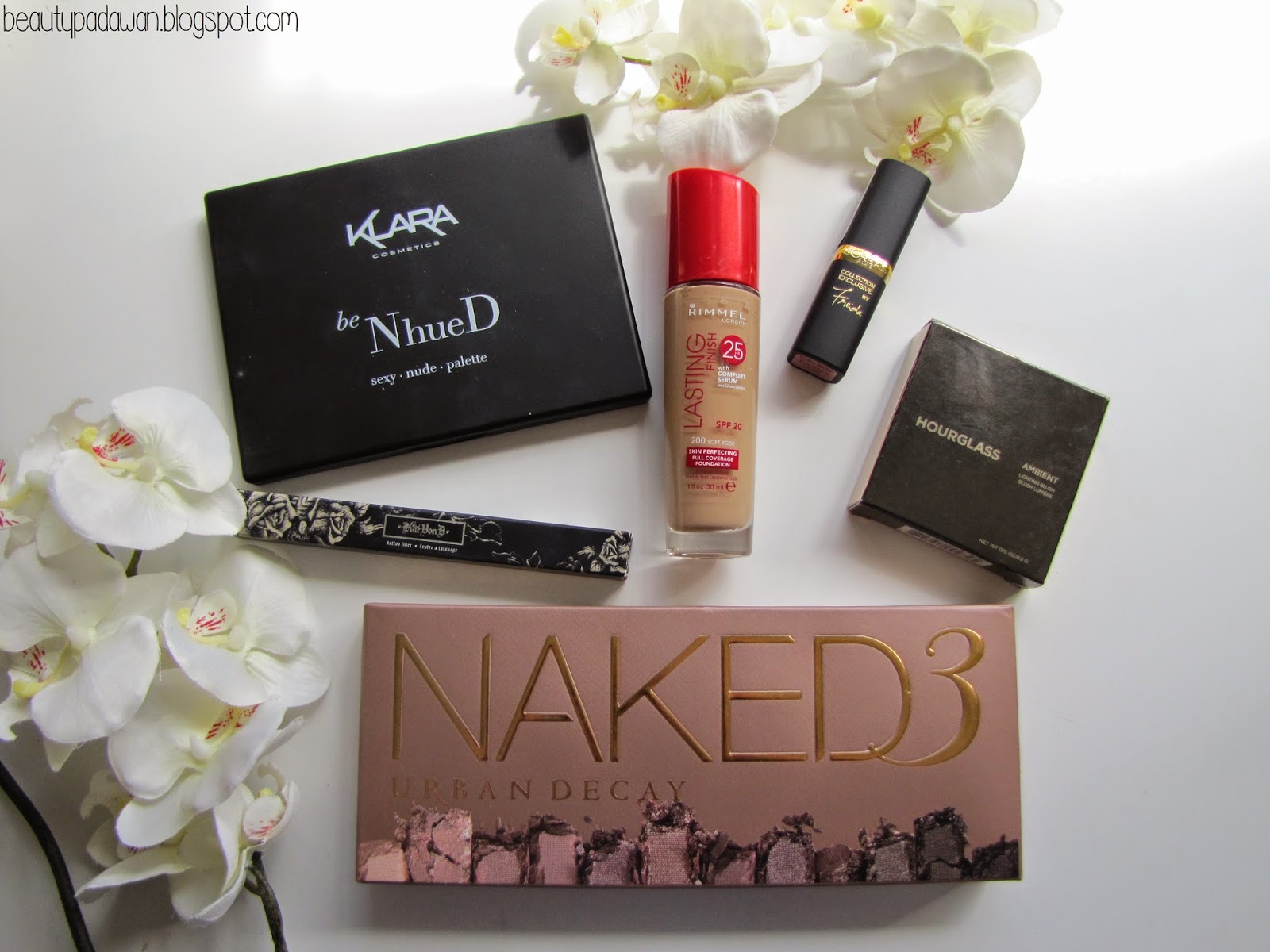 Klara Cosmetics Be NhueD Eyeshadow Palette || I bought this a couple of months ago in the post-Christmas sales, and I've spent a hefty amount of time trialling out the shadows to see what kind of look I could pull out of it. This palette has six matte shadows -- five naturals/browns, and one white -- and they all work insanely well together to give you a really elegant, fuss-free look.

Kat Von D Tattoo Liner in "Trooper" || This has to be, hands down, the best pen liner I have ever used. Ever other brand I've tried with the same idea -- MAC, NARS, and CoverGirl -- have let me down in one way or the other, but so far I have had very few troubles with this. It's a beautiful blacker than black colour, allows precise application, and stays on all day.

Rimmel Lasting Finish 25HR Foundation || My skin has seen better days than those in February, and I had a few days where I wanted my makeup to survive all day -- this was the foundation I reached for. It did a pretty decent job of staying in place, and even if it did get a little shiny at the end of the day, I didn't end up looking like a grease ball. I have to say that I really like this foundation.

L'Oreal Paris Collection Exclusive Nudes in "Mauve Tint by Frieda" || I bought this lipstick because it was the only variety left at Priceline when I went in to buy the whole lot of them. I swatched it and was unsure as to whether I'd like it or not -- and then thought, "Hey, why the hell not?" It's actually been my favourite lipstick of late: it's not too dark, it goes with whatever eye makeup look I decide to go with, and it's light enough that I don't have to worry when I eat! Ladies and gents, I have a winner!

Hourglass Ambient Lighting Blush in "Radiant Magenta" || I've been reaching more and more for this blush lately -- I've been going so neutral and everyday on the eyes and lips that I wanted a bit more colour somewhere. "Radiant Magenta" was perfect for that, adding some fresh colour to my cheeks that lasts longer than Sean Bean in just about any TV show he's in.

Urban Decay Naked3 Palette || A friend of mine went to the UK last year and asked if I wanted her to get anything for me. This was one of those items, and while I've still yet to fully discover the potential of this palette, it's been great for easy, fuss-free everyday looks.

That's about it for my favourites for February! Everyone's been saying it, but it really has gone quickly -- what a difference two or three days makes to a month! At least next year's a leap year, so we'll have an additional 24 hours to get our shiz together.

What were you loving last month?