It's not unusual for my mother to travel interstate for a conference or work-related event. She's not constantly coming and going, but she attends maybe a few times a year, usually not for any longer than a week. A few weeks ago she went to Sydney and, for some absurd reason, my brain hiccupped and never made a jump to Sephora. I never mentioned it, never hinted for a surprise present, never asked her to pick up anything... Am I sick or something? 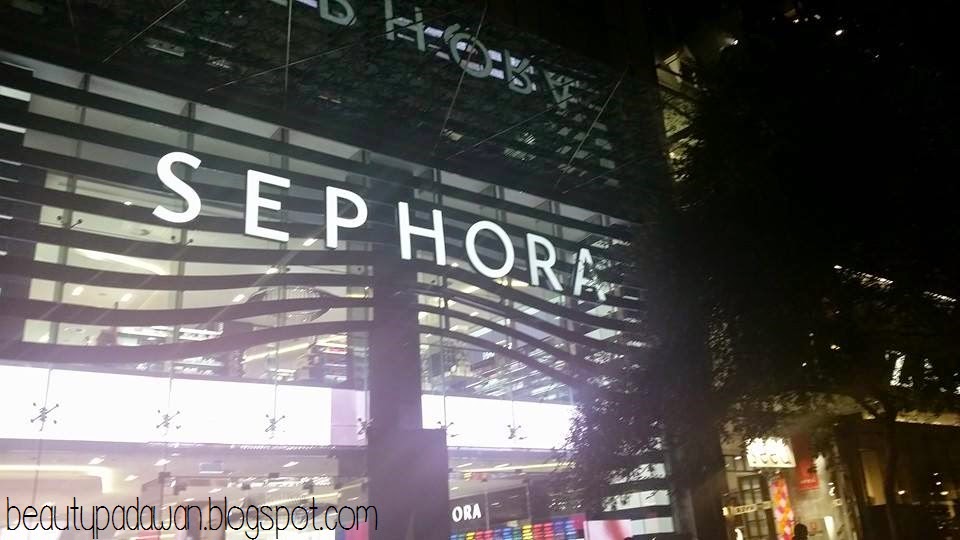 Wherever my mother was staying, it was literally a stone's throw away from Sephora, and she was gloating about it to me -- as every decent mother does -- through Facebook! (Adults these days, they have no respect, am I right?) It was then that she asked if there was anything I might like for her to look at for me.

Naturally, that meant my mind when completely, utterly blank.

Eventually I sent her a text with some loose guidelines: 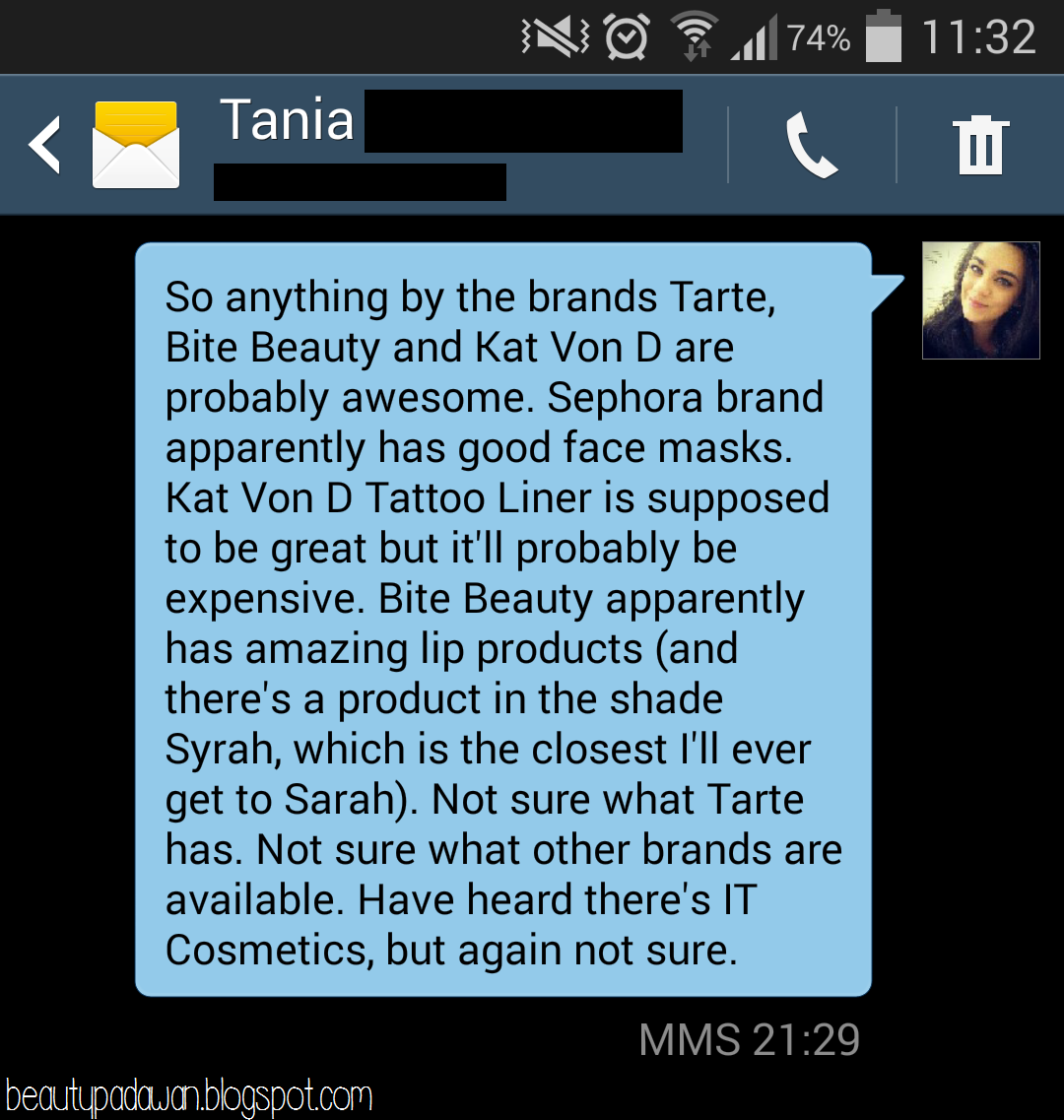 Fool-proof, y'know? This way, if she felt unsure about anything, she could always ask a shop assistant to help her out and she be guaranteed to find something -- and if not, then it wouldn't matter. I didn't have a hankering for anything specific. As it turned out, she did find a few things to surprise me.

Boy oh boy, did she do good.

My mother sent me a photo of the following three items in her hotel room. She'd told me that she'd bought me a purple mascara (which I was pretty stoked about to begin with), and that she had a one or two other surprise items for me. 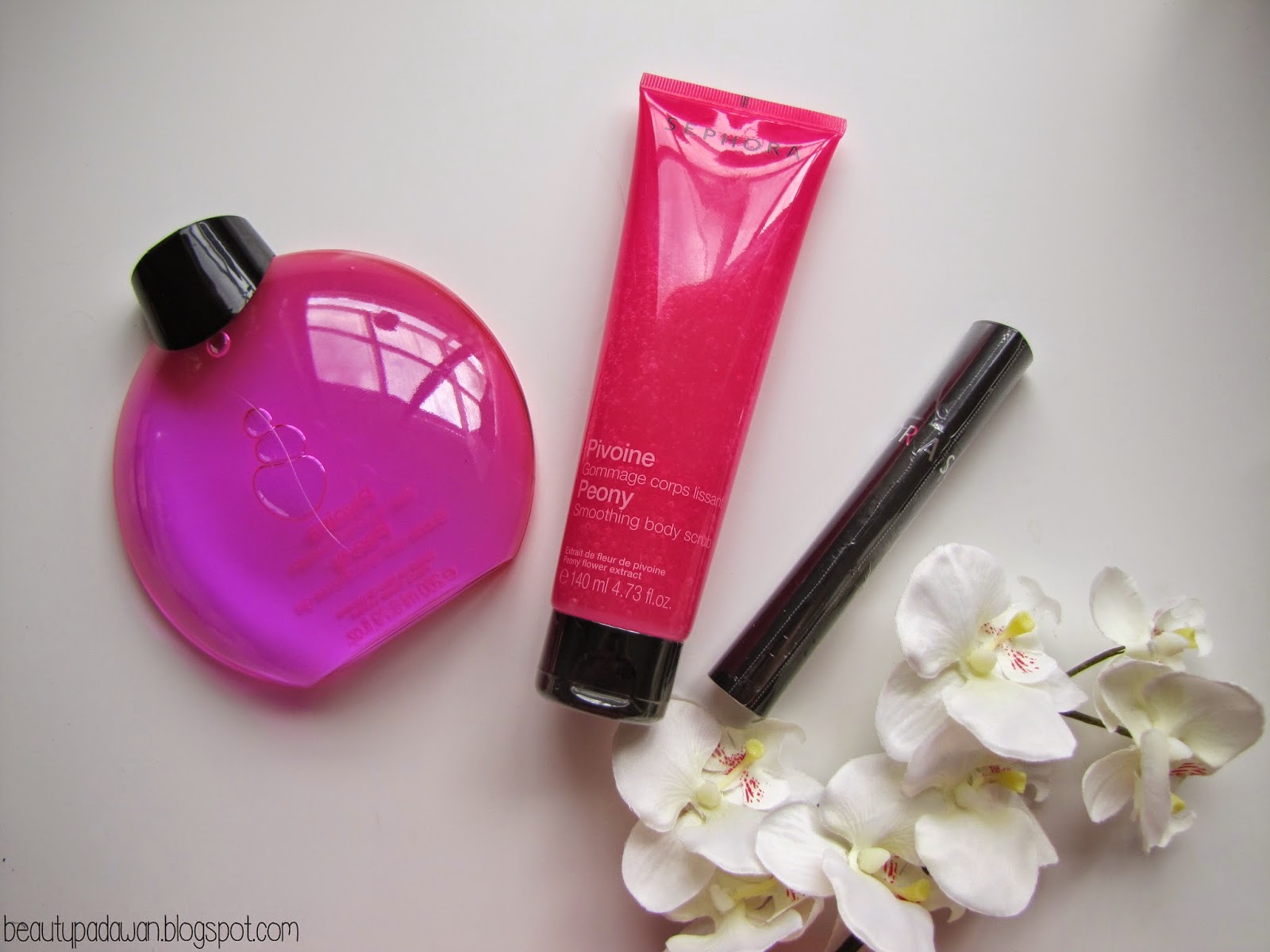 Sephora Peony Bubble Bath & Shower Gel || I'm not a bath-taker. Sometimes I think about it, but our bathtub is huge, so I usually can't be bothered. Shower gel, though? It's definitely something I can get behind. Peony isn't a scent I've ever used before, so I'm really excited about this, but I'm going to wait until the one I currently have in the shower is finished (and it's huge, so it could take a while).

Sephora Peony Smoothing Body Scrub || Not gonna lie, when I first saw this I thought it was a body lotion, and I was all, "Oh no." Body lotions and creams and soufflés are nice and all, but I don't really use them at all. To my total surprise and pleasure, it's a scrub! It doesn't look like it has any texture to it, so I'm not sure how it's supposed to work, but I'm excited to try it out.

Sephora Full Action Extreme Effect Mascara in "Violet Purple" || Here it is, the purple mascara! My natural hair is extremely dark, so I think this will hopefully be colourful enough to show up.

I'd thought was the end of it, and to be honest, I didn't mind. I hadn't expected anything, so to have some nice new things for the shower, as well something colourful to add to my mascara bag, was incredibly awesome. Mum came home when I was at work, so it wasn't until after I'd finished work late that night when I got a chance to see her.

I was puttin' on my PJs like a boss when she came in -- presumably to say goodnight, but who knows, she could've wanted to nick my Ariel POP Vinyl figurine -- and said, "So I tried to find that tattoo liner thing, but I couldn't get you one." I obviously didn't mind about this either -- after all, it's the thought that counts, isn't it? -- so I said, "Oh, the Kat Von D Tattoo Liner? That's okay, I figured they might be sold--"

"Aaaand, I also got you this." 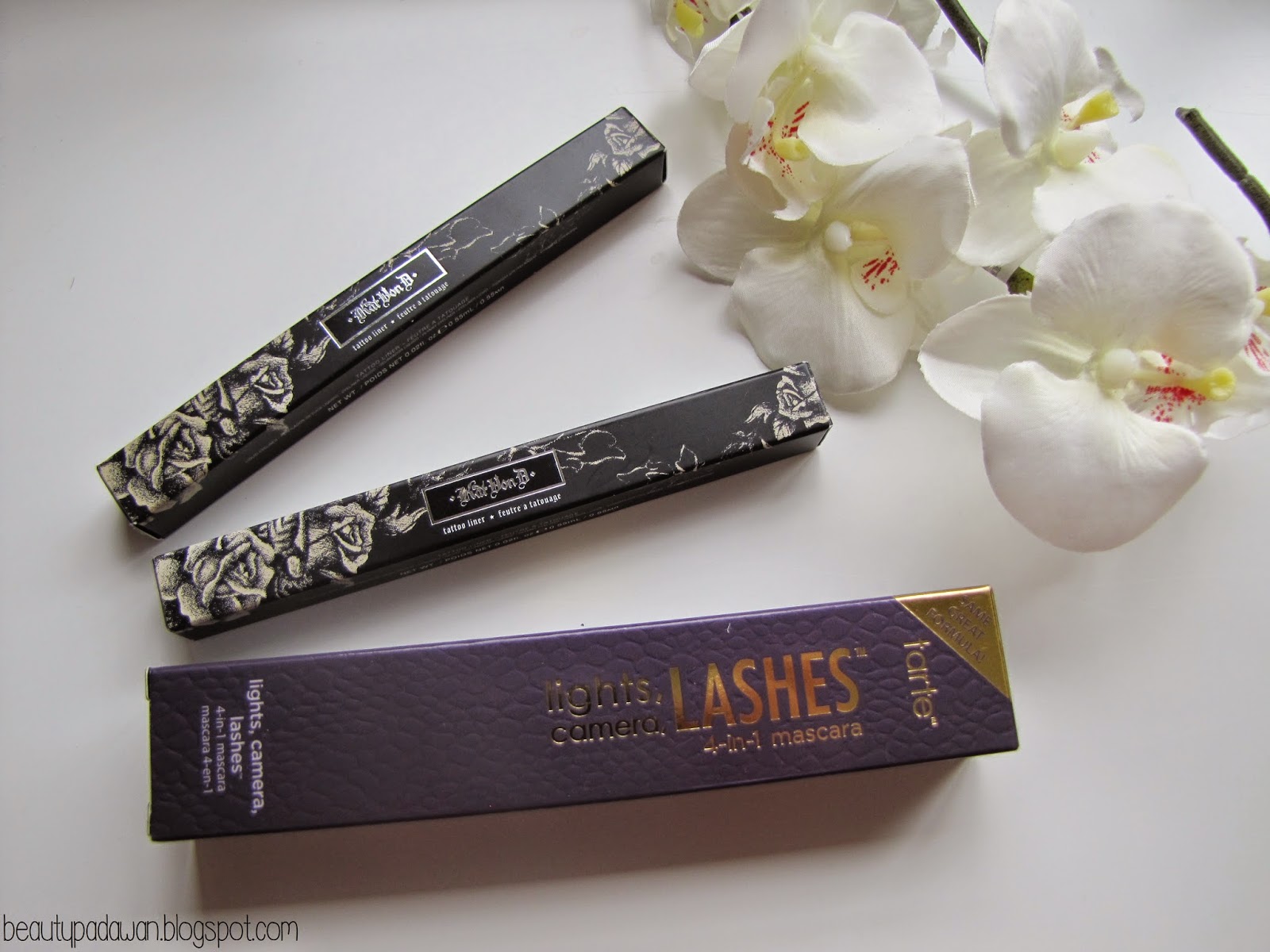 Kat Von D Tattoo Liner in "Trooper" || A cult product, I was stunned when my mother was able to get me two of them. I wasn't sure that it could be as good as the Maybelline Hyper Glossy, which is my Holy Grail eye liner, but I sure as heck wasn't going to give a fair go. As it turns out: it's the greatest pen liner I've ever used.

Tarte Light, Camera, Lashes Mascara || My mum put this into my hands so quickly after she said, "I also got you this" that I had no time to properly register it for a moment. I've heard so many great things about this mascara that I've got a lot of high hopes for it. Will it be better than Too Faced's Better Than Sex mascara? We'll have to see.

These two items definitely made my evening, and so I went about the next day trying to figure out if I'd get any time to photograph them while the light was as its best. That was when Mum came into the living room and started talking about something that she'd bought for herself (although, I must confess, I can't remember what it was) before she gave me a few other things. 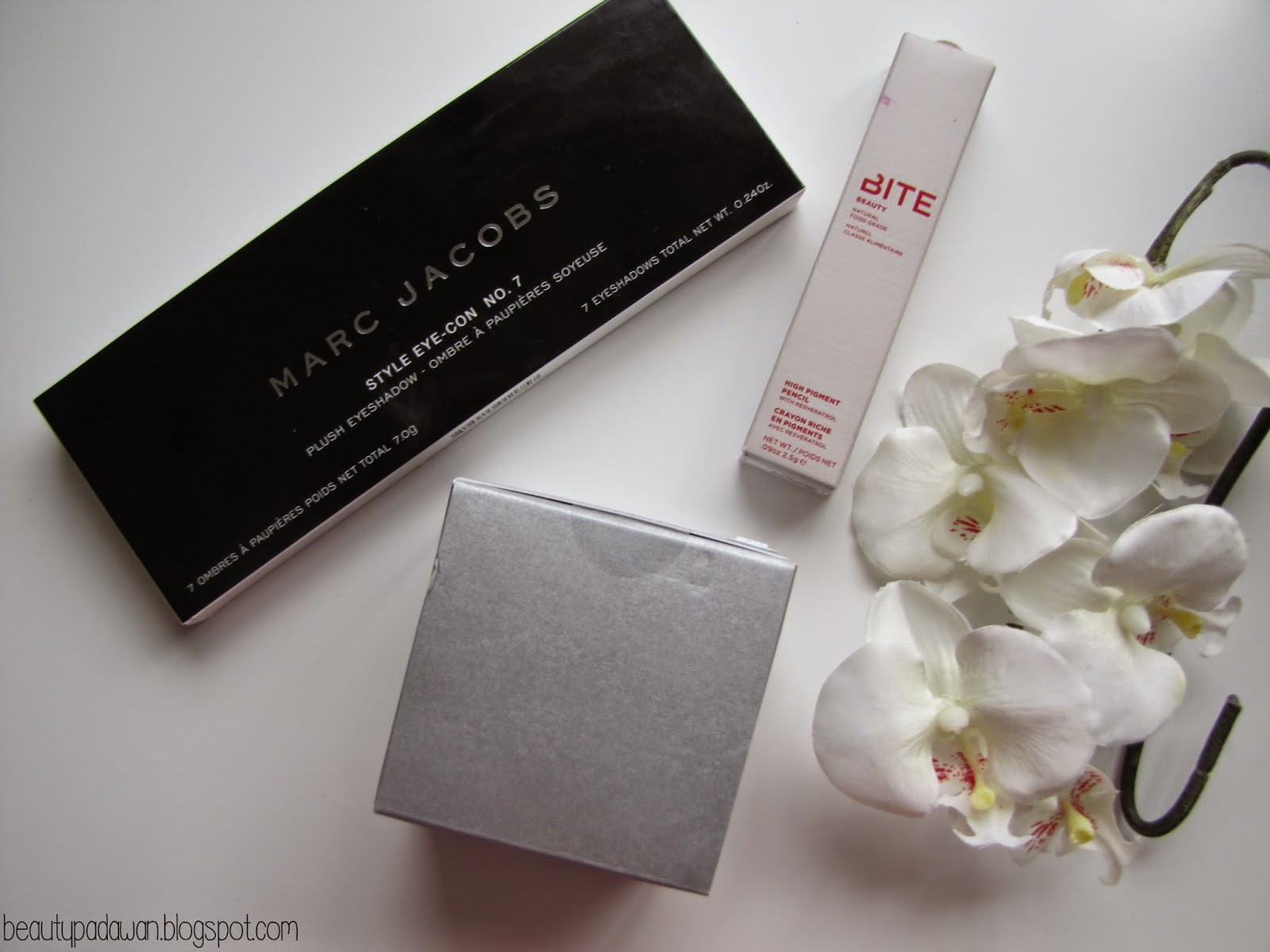 Arcona Trial Pads || I can't lie, Arcona isn't a brand that I've heard of before, so I wasn't sure what my mother had given me. They're very luxurious-looking makeup removal wipes, and they'll be ones that I use only very occasionally, if I'm so tired at the end of a long night that I can't be bothered going through the whole makeup removal process.

Bite Beauty High Pigment Pencil in "Syrah" || I had mentioned this product to my mother before, mostly because it's literally the closest I feel I will ever come to finding a product called Sarah. It's a cute kind of peach-nude colour, and I'm in love with it. The High Pigment Pencils seem to be something of a big deal in the beauty world, so I really can't wait to give it a test run.

Marc Jacobs Style Eye-con No. 7 Eyeshadow Palette in "The Starlet" || This was definitely one thing I did not expect. A super cute, super sleek palette with neutrals and one of the nicest shimmery olives I've ever seen? Marc Jacobs, no less? I never thought I'd get to own anything Marc Jacobs until I was in my mid-30s and making a comfortable living! 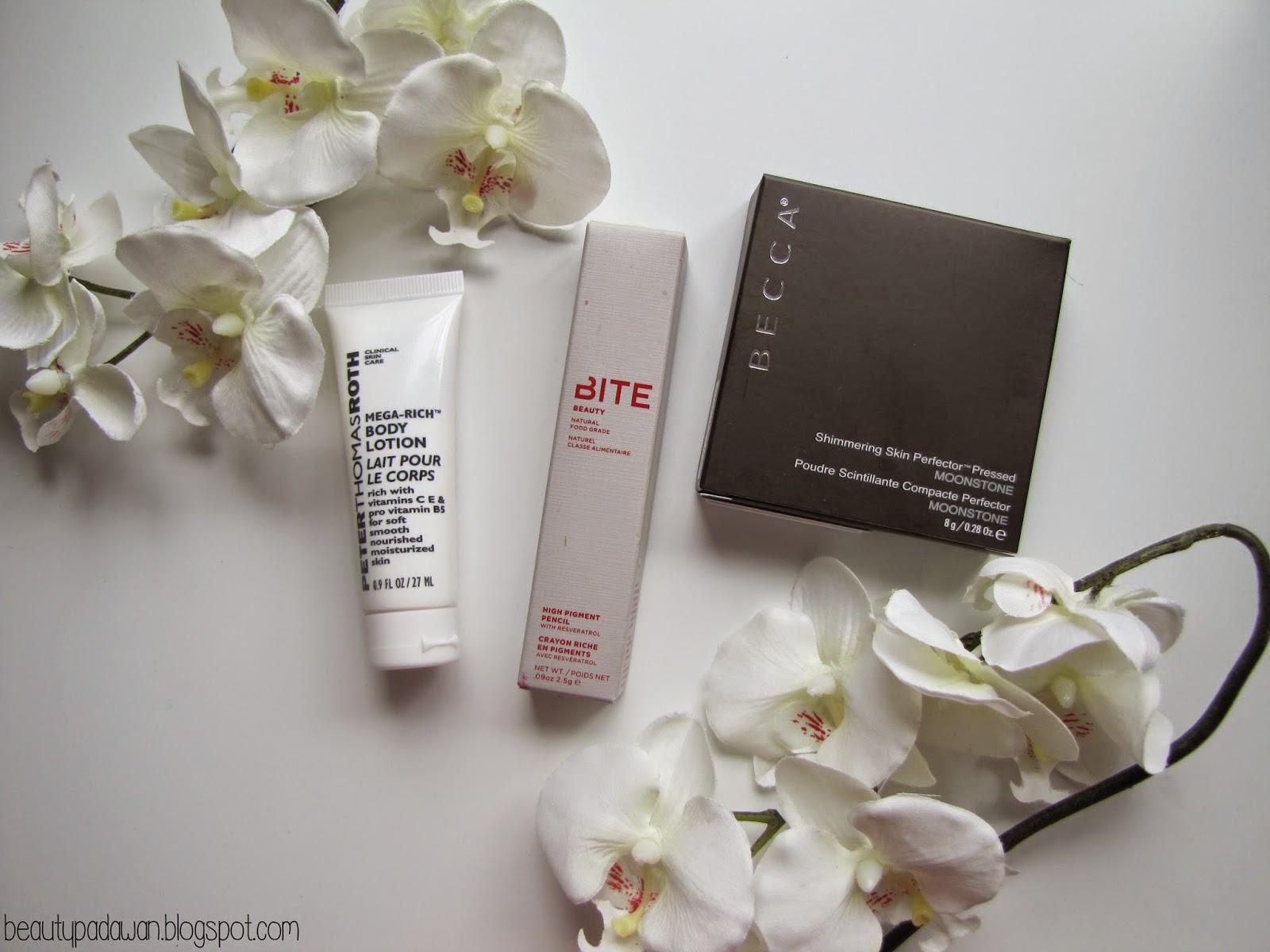 Peter Thomas Roth Mega-Rich Body Lotion || I believe that Mum didn't actually get this from Sephora; it came, instead, from the hotel she was staying in. I'm not usually one who uses body lotions and creams, but hey, sometimes your legs need something to stop people from finding out that you're actually a lizard in disguise.

Bite Beauty High Pigment Pencil in "Corvina" || Now this colour is something special. It's a blue-toned pinkish red that reminds a little bit of MAC No Faux Pas mixed with MAC Damn Glamorous. It's the kind of shade that I gravitate towards in a big way, so it's a no brainer that I love it.

Becca Shimmering Skin Perfector Pressed in "Moonstone" || Oop, there it is, the thing that practically pushed me over the edge and floored me so much that I almost started to cry (but let's keep that between you and me). Although Becca is an Australian brand, it's only available via Sephora, and there was something of an uproar when people found out just how large the mark-up was. As I understand it, this product is a highlighter that those with the moolah swear by, so I'm really excited to see how well it works. I was surprised by how yellow it looks in the pan, but I'm certain it'll work fine regardless.

Bite Beauty Cashmere Lip Cream in "Sherry" (not pictured) || This product is red. It's very red. I want to say that it's a yellow-based red, but I want to compare side-by-side with some other reds just to make sure. I haven't tried this out at all yet, but just going on name alone, it looks like it might be a liquid lipstick. Time will tell!

That's it for this epic Sephora haul -- I hope you enjoyed reading about it as much as I enjoyed writing about it! Let me know if you've used any of these products, if there are any you want to try one day, or perhaps let me know which one you like the best!

PS. Did you know I have a Facebook page now? It's just another easy way to keep up-to-date with the blog!
Posted by Shae Barry at 11:52