A little while ago, I got an invitation from Myer to attend a special VIP Christmas Shopping Evening -- this wasn't a particular event where I was singled out, I was sent the invite because I've spent an obscene amount of money on makeup I have a Silver membership. I was able to bring along two friends with me to enjoy a number of discounts (such as 10% off cosmetics!), so I took my friend Jo-Anna from Jodash Vanity and her sister Janina.

This naturally meant that we wanted to spend a small fortune on makeup, and naturally we did! I myself had a shopping list in mind but I didn't get everything on it (mostly because I forgot, not gonna lie). Take a look and see what I did get! 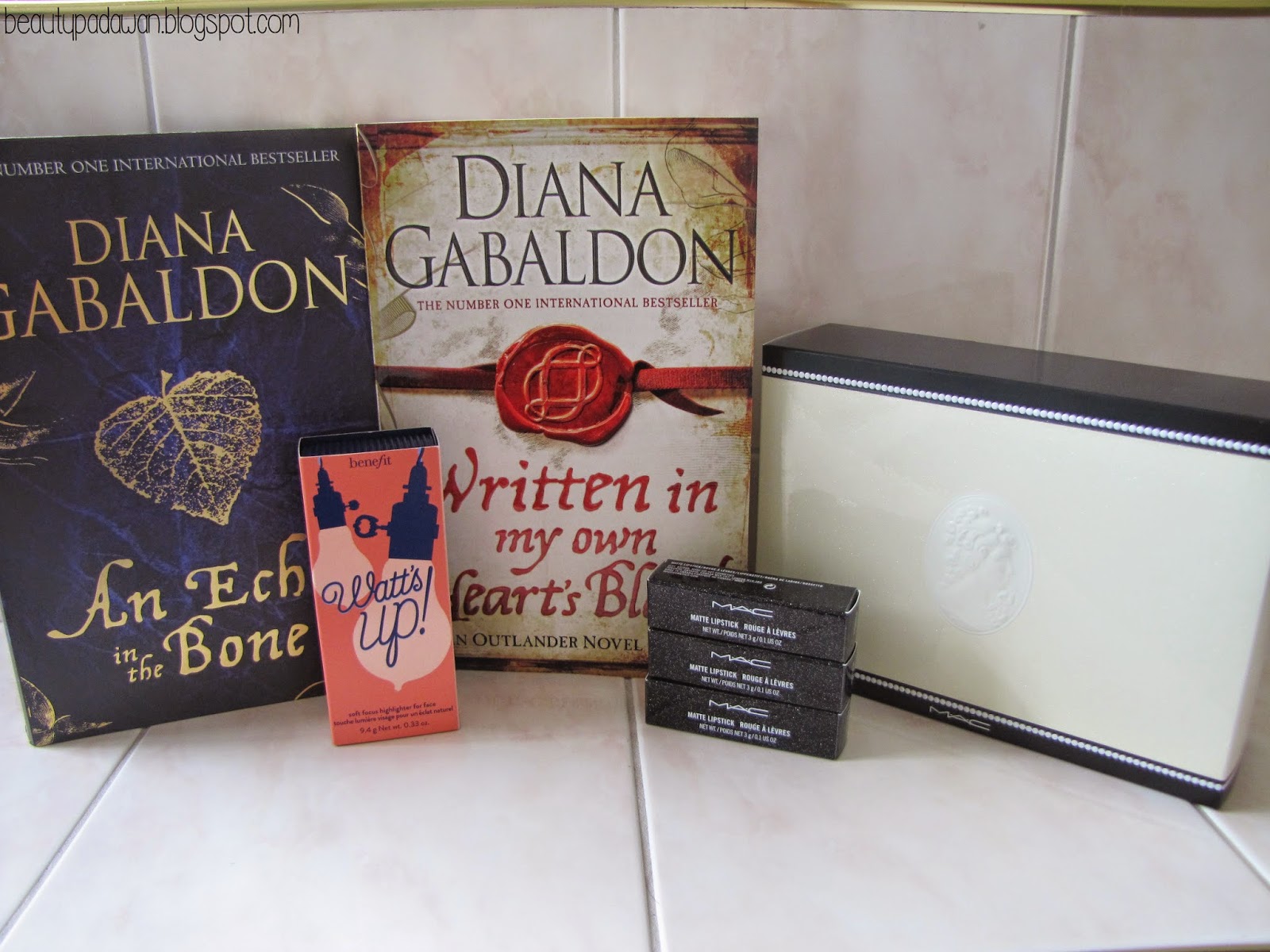 An Echo in the Bone by Diana Gabaldon -- This is the 7th book in the Outlander series. It is an absolutely monstrous piece of literature, and I'm actually nowhere near it in the series; I've only read the first four! However, with 40% off books, I couldn't resist picking it up.

Written in my own Heart's Blood by Diana Gabaldon -- The 8th and most recent of the Outlander books, it was released a couple of months ago. I'm really excited to see what happens with Claire and Jamie at this point -- so much time has passed between the first four books, I have to wonder how old they're going to be!

Benefit Watt's Up -- I've been after this highlighter for a while, having seen it on several times on YouTube videos recently. As a Beauty Padawan, I'd normally stay away from cream blushes and highlighters because I'm not confident that I can apply it right, but I've used this once or twice so far and I think it works well!

MAC Heirloom Mix Lipsticks in "No Faux Pas", "Salon Rouge", and "Sparks of Romance" -- I had lost all hope of getting these! These sold out online and in store very, very quickly -- in fact the only one you can get is "Tribalist" (and I'm not surprised because the quality is supposed to be atrocious). I honestly didn't think the Myer I went to would have it, but imagine my excitement when I wandered over to the MAC counter and realised that none of the testers had 'Sold Out' on them! It turns out that they'd gotten their shipment later than everyone else, and that it had arrived the day before. I quickly snapped up the lipsticks!

MAC Keepsakes Red Lip Bag -- I umm'd and ahh'd over this for a while, because although I was after the cult classic "Ruby Woo", I was a little apprehensive about the price. It wasn't bad value, however, and it was certainly cheaper than buying the pieces individually, so I decided that I couldn't go wrong. This lip bag is now sold out online, and the only one you can get is the online-exclusive coral bag.

﻿
That's it for this small-but-meaningful haul! Do you have any of these items in your collection? Let me know your thoughts!